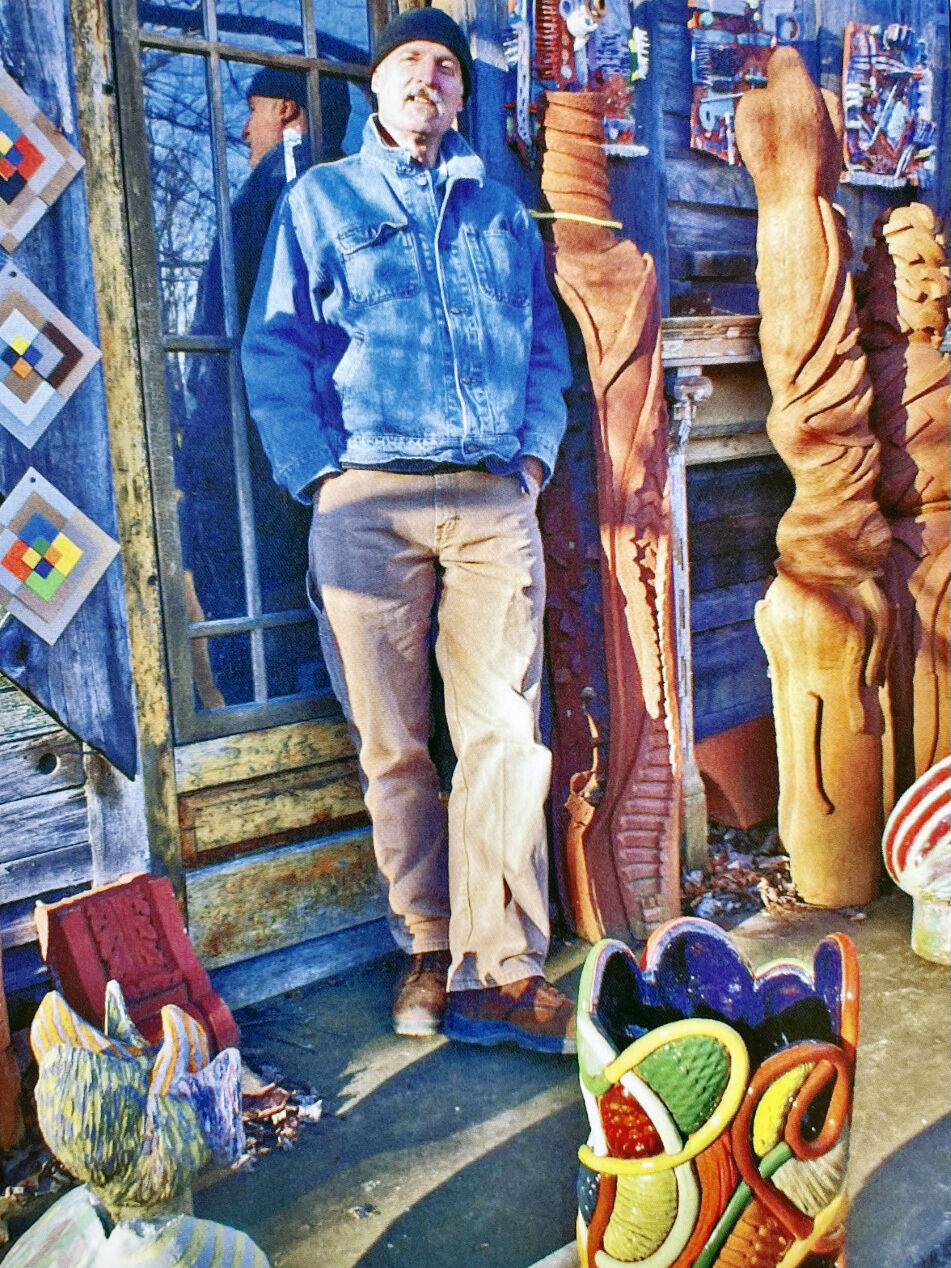 Kyle Hallam worked for more than 40 years as an artist. He died May 27 from a brain tumor. 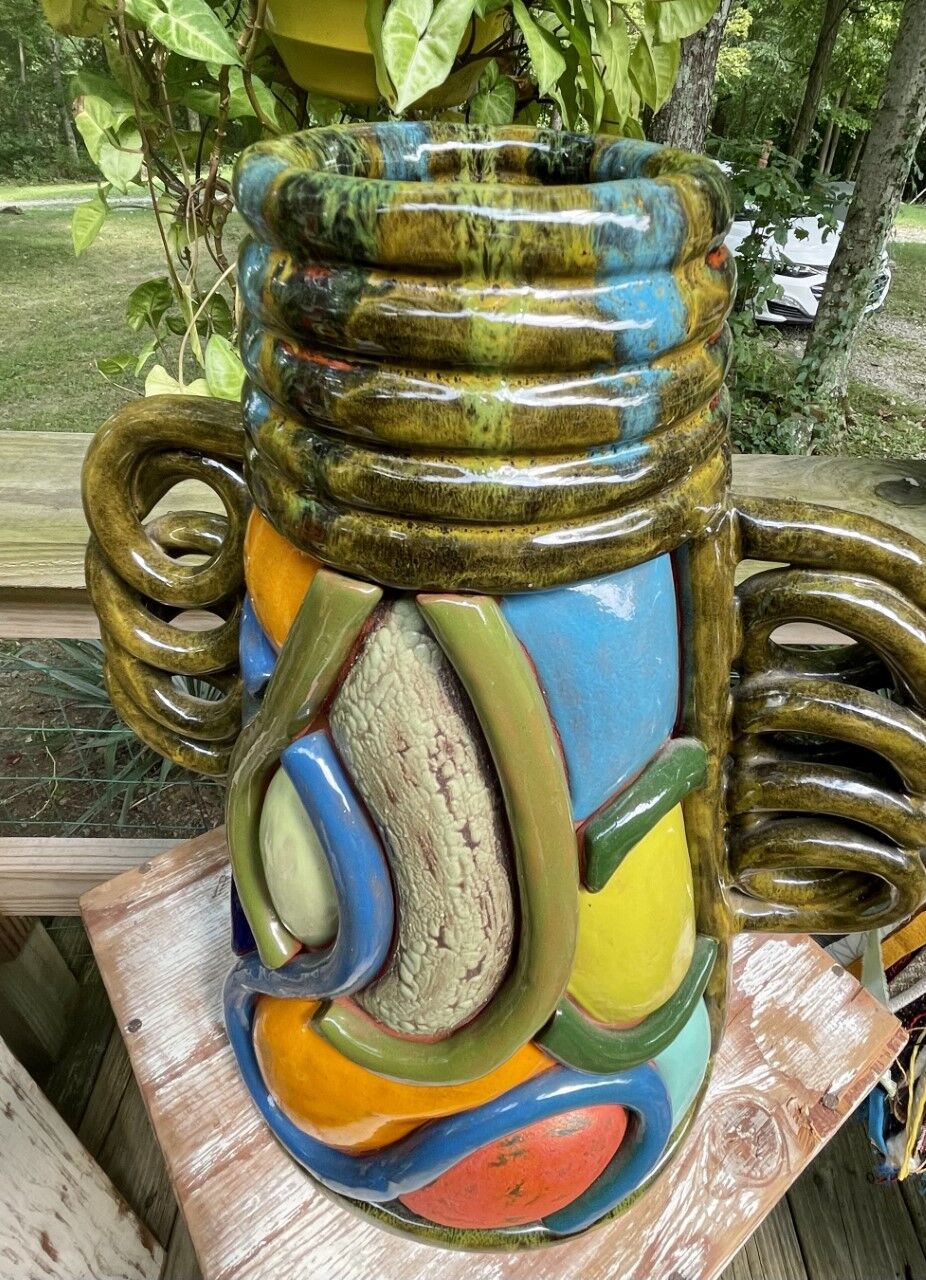 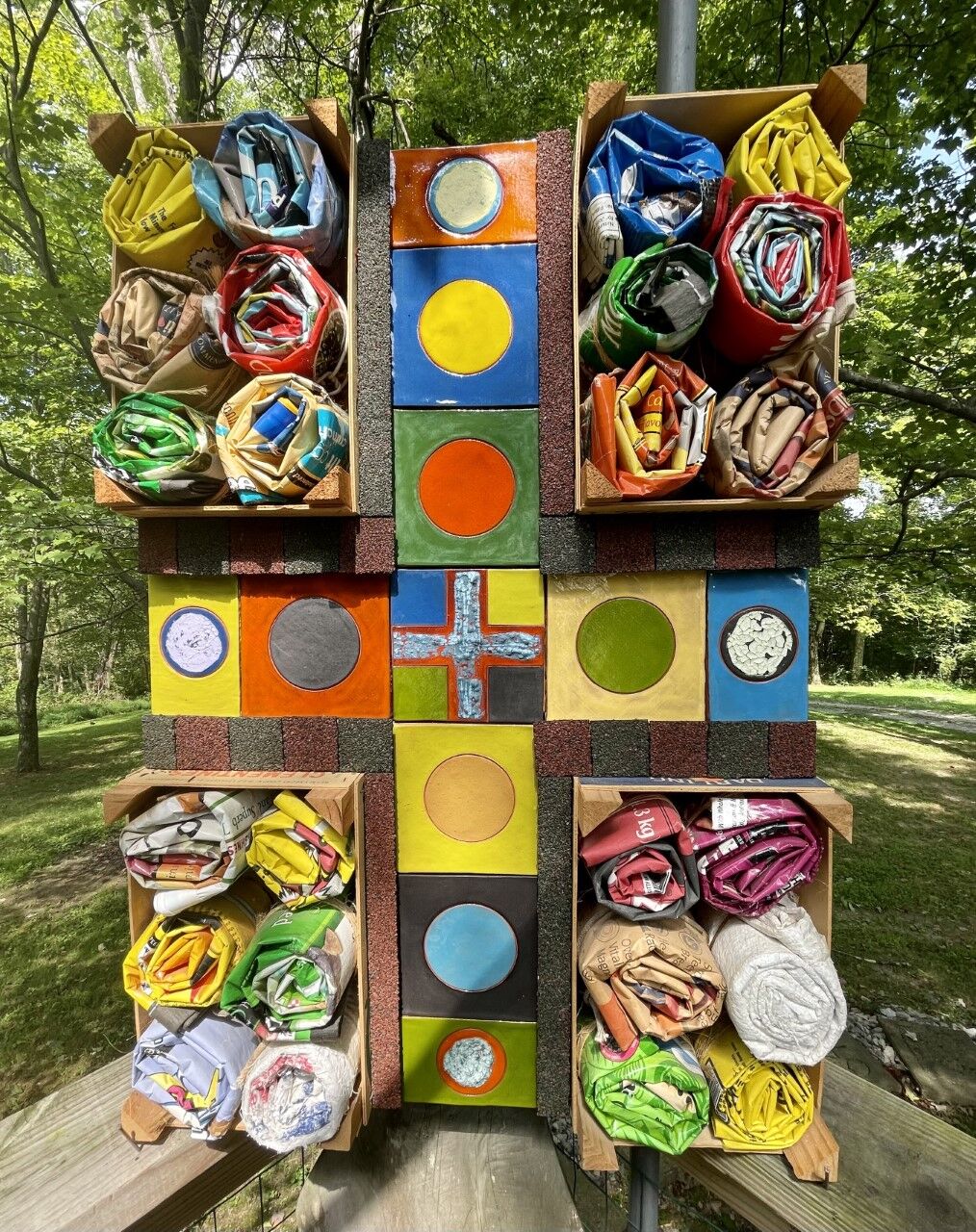 A work created by Kyle Hallam 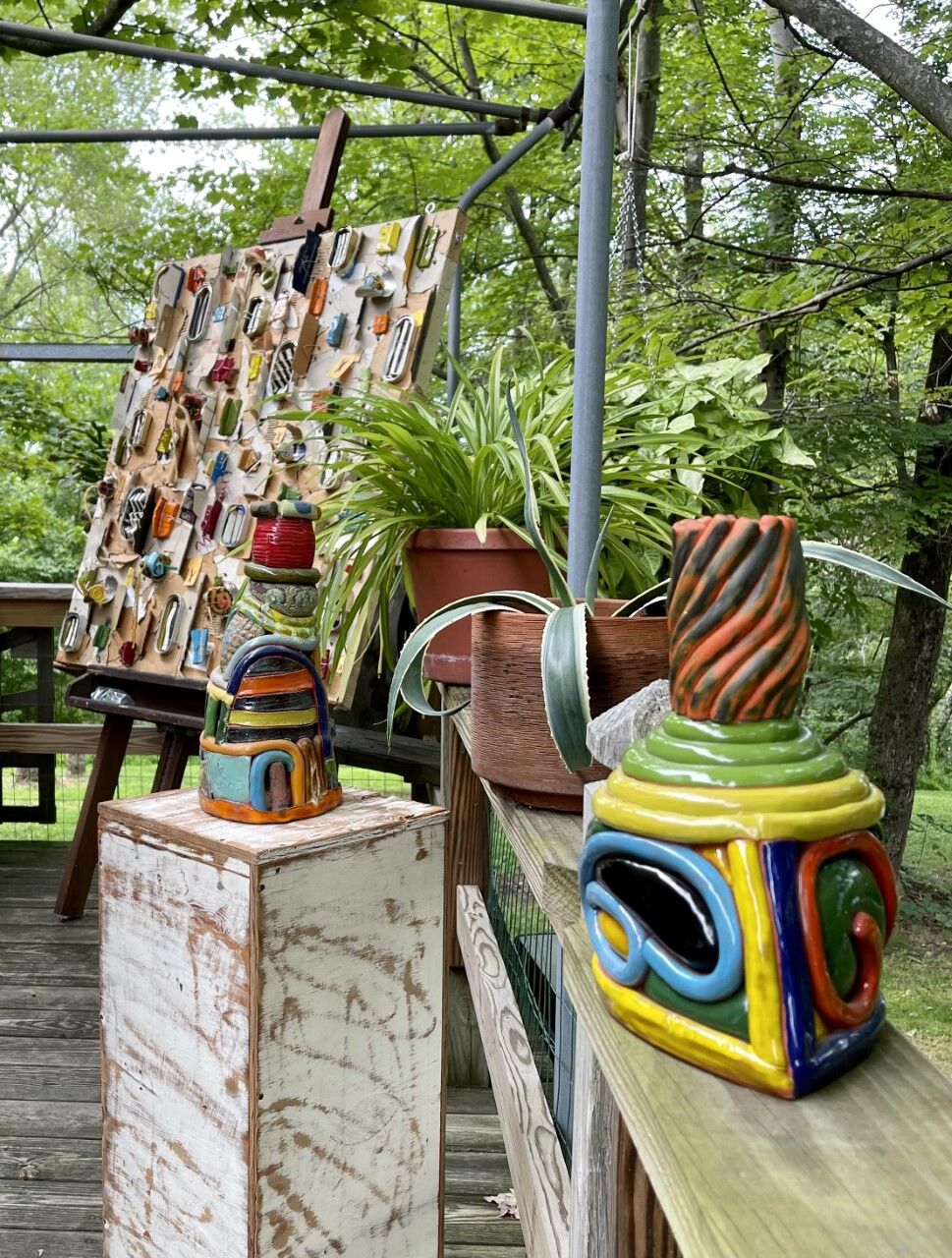 Some examples of Kyle Hallam’s work are on display. 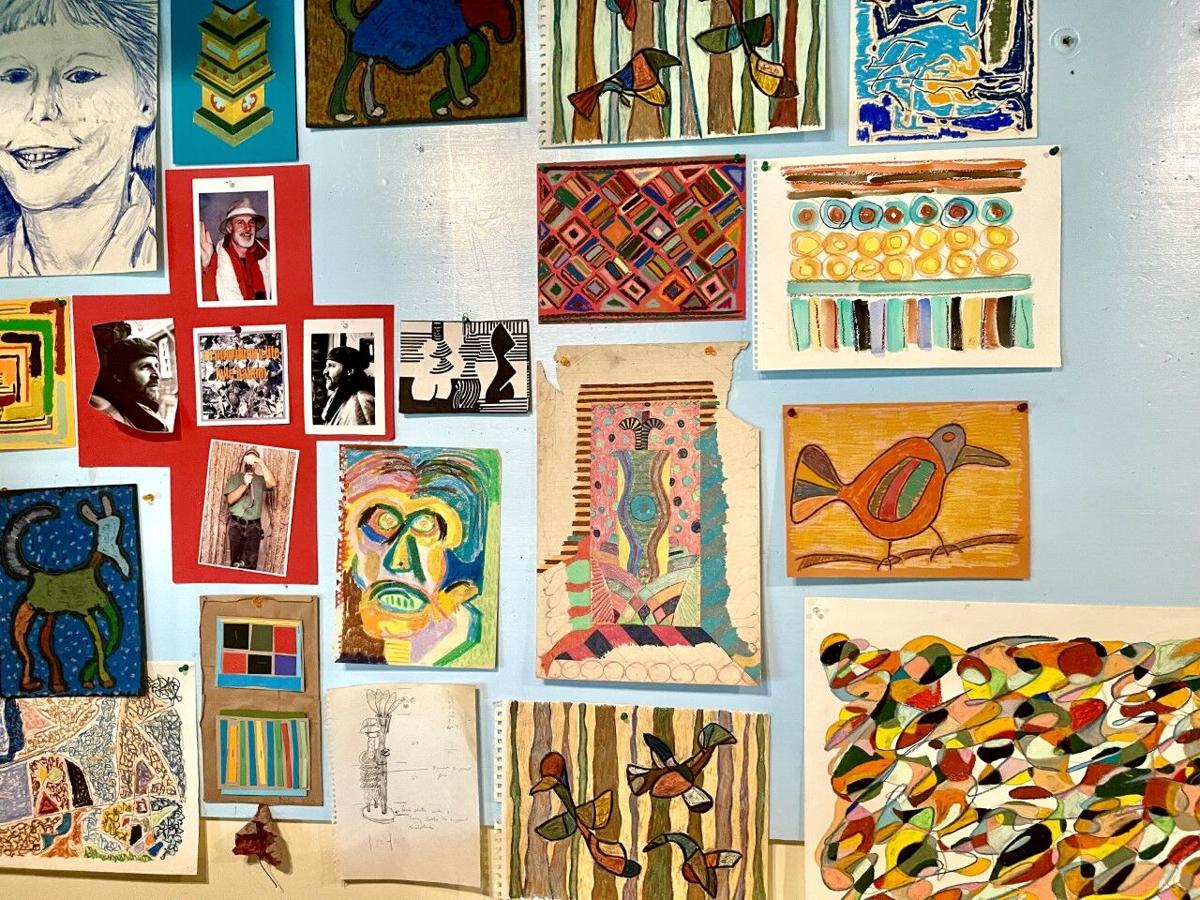 Some works created by Kyle Hallam are on display locally. 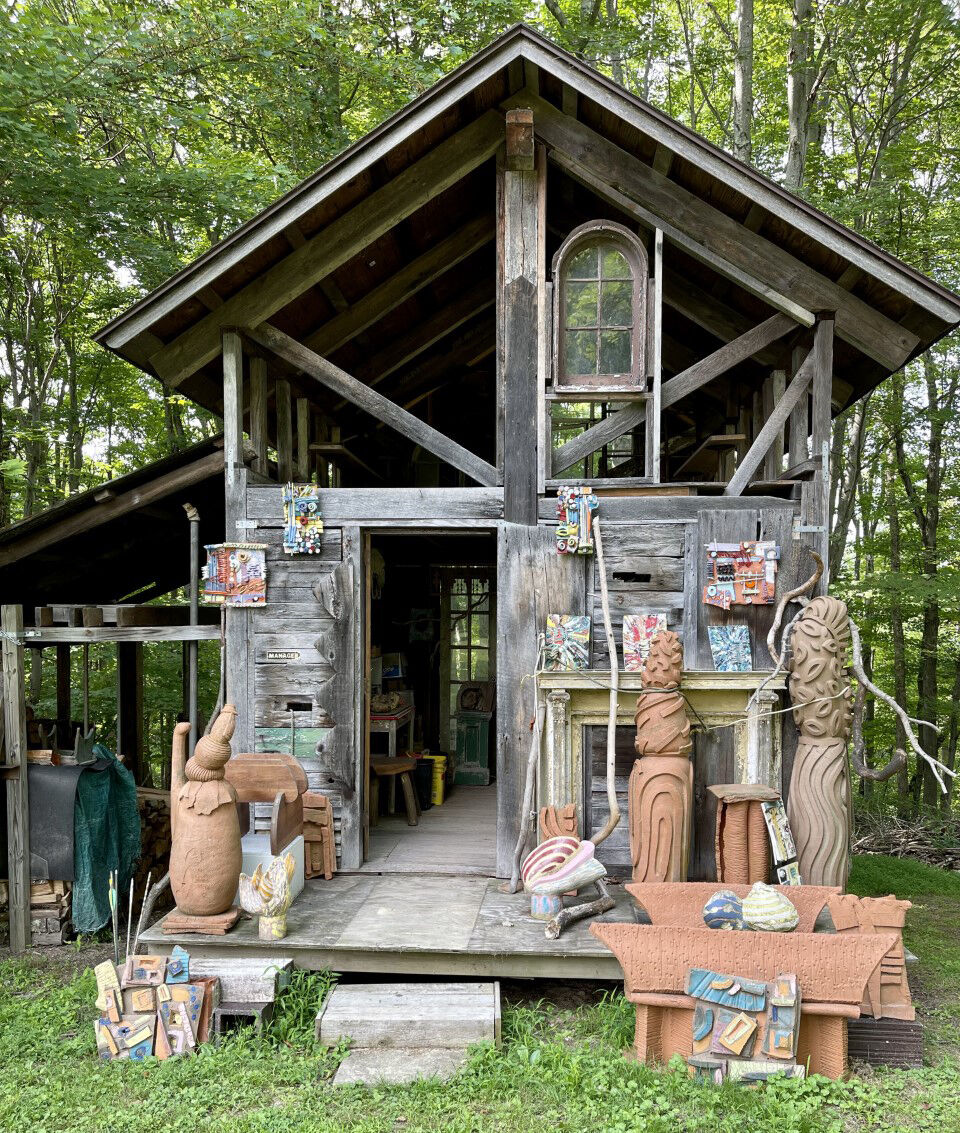 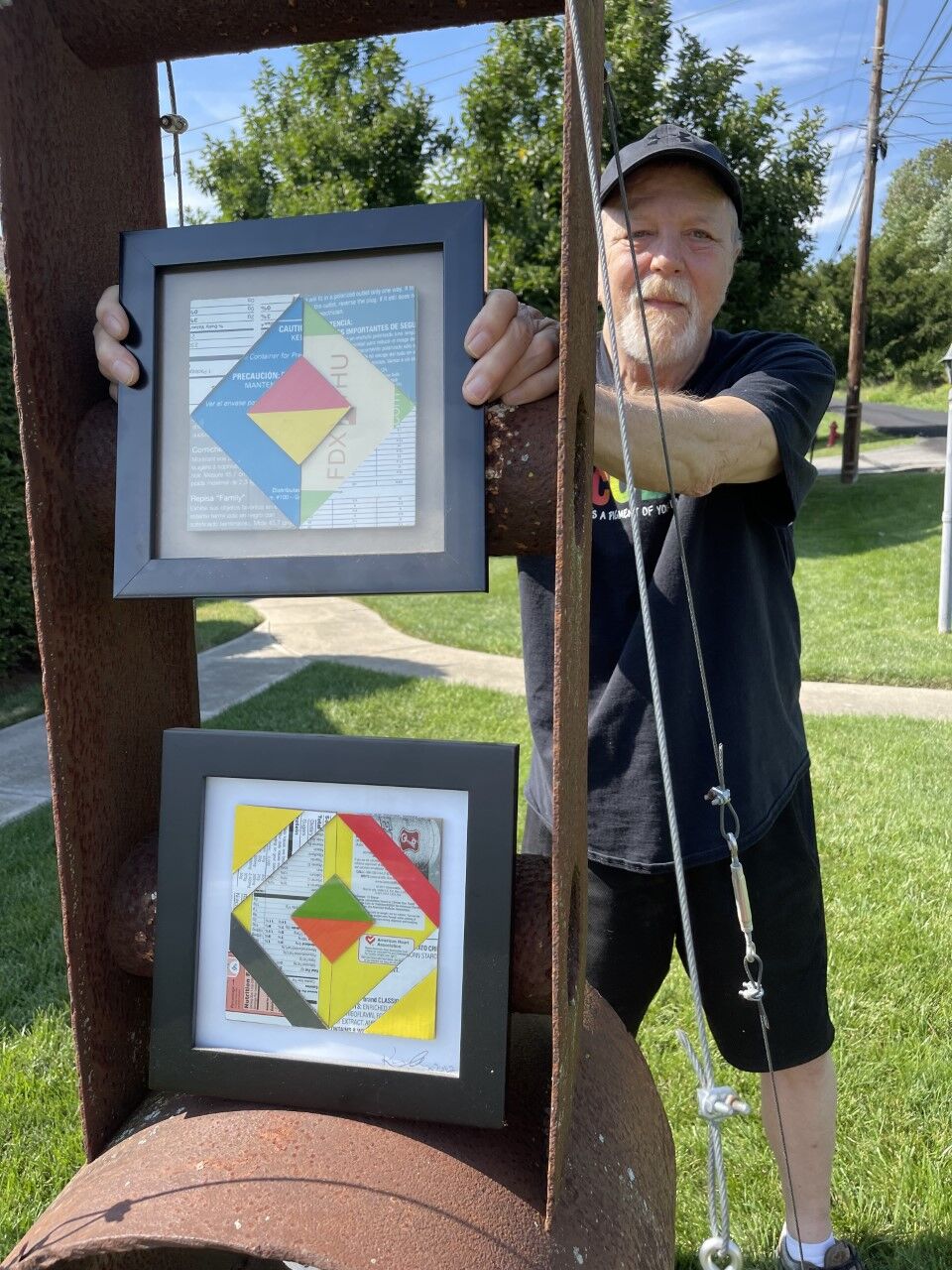 Kyle Hallam worked for more than 40 years as an artist. He died May 27 from a brain tumor.

A work created by Kyle Hallam

Some examples of Kyle Hallam’s work are on display.

Some works created by Kyle Hallam are on display locally.

Reduce, reuse, recycle – and be joyful. The art that clay artist Kyle Hallam produced over a career of more than 40 years is all of that and more.

When the artist known as Kyle – as he signed his work when he thought it mattered – died from a brain tumor on May 27, it sent shockwaves of disbelief through the network of those of us who knew him as a friend, a fellow artist and community activist of the very best kind.

If anyone seemed invincible, it was Hallam.

He ate the wholesome foods seen in Impressionist paintings, radiated intelligence and good cheer and at age 67, still kept the lean physique of a carpenter who knows how to swing an ax and chop wood. And his art was always happening. An assemblage of found objects that Kyle started hangs unfinished on an outside wall of his home in the forest above Thistlethwaite Winery on Center School Road, Jefferson. Its bright colors are a testimony to the spirit of its creator.

The side porch of his handcrafted home remains an open-air gallery for the private collection he and wife Ellen Boros loved to live with. Here you can relax, listen to the birds and let your eyes be caught again and again by some detail that feels fresh each time you look.

That’s what good art does, sculptor Steve Murdock told me when I stopped by to see the Kyle originals he has in his own collection.

“Artists do art so they have something to see,” he said.

His two framed collages are a pop of color amidst the dark textured wall sculptures in the living room. Outside, they showed their stuff for the camera against a backdrop sculpture of unpainted steel anchored in Murdock’s front yard in Waynesburg. He and Hallam graduated from Central Greene High School in the early 1970s and became good friends later on as working artists.

“He was a great guy you wanted to get to know better the first time you met him. I’m a big fan of his art. His sense of color is amazing,” he said.

As members of the Pittsburgh Society of Sculptors and Craftsman Guild of Pittsburgh, these two hometown artists exhibited and helped promote regional art onto the national stage.

“He loved animals and I was into the environment so we were in sync,” Society of Sculptors president Duncan MacDiarmid told me when I reached him by phone. “He was what we all would like to be – bright, cheerful, creative and dynamic. With him you knew you were being heard. He cared about people and ideas.”

“Kyle was happiest when making art and he was always making art,” retired Waynesburg University ceramics department head Susan Phillips said. She met Kyle in the mid-1980s when he returned to Waynesburg after attending four different colleges, including the University of Colorado and Alfred University in New York, noted for its focus on clay. His quest wasn’t for a degree but to find mentors to perfect his craft. After renting a studio in the old Armory on Cherry Alley, Kyle approached Phillips about renting the college ceramic studio for the summer and began producing works with natural textures and bright colors that would become his trademark.

The scion of a family of carpenters, Kyle supported his art by taking construction jobs, Phillips noted.

“I hired him and he did amazing work on my house and barn in Amity,” Phillips said. “He and his brother Scott raised the roof by hand and inserted a dormer to turn my attic into a living space. He was very whole brain, both extremely creative yet totally analytical. He could do anything in the building trade.”

As clay artists with a passion for inspiring others, Phillips told me, “We went to a lot of exhibits and museums and were involved in NCECA – National Council on Education for Ceramic Arts.”

When NCECA came to Pittsburgh in 2008, they put together an exhibit of Greene County’s historic utilitarian pottery at the Heinz History Center to highlight our region’s rich clay heritage.

Hallam found his partner for life living catty-corner to the Armory in the Wilson building in 1988. Ellen Boros remembers the Dairy Queen cone he was holding when he introduced himself – the memory still brings a smile. Their relationship fledged in 1992 when Boros took a traveling sabbatical from her high school math position at Central Greene, and they headed out for a 91-day tour of America. Later that year, they bought property on Center School Road with an electric line attached to a power pole and a half-finished shed by the tree line.

Hallam rolled up his sleeves and went to work. Two years later, the first section of the house was built, and the couple moved in.

I first wrote about Hallam for the Winter 2011 edition of Greene County Magazine. He had found new inspiration in what he and others were bringing to Greene ARC’s recycling center in Prosperity – kitty litter bags, old books, brightly branded boxes and junk mail. In his eyes, it was a creative romp of color, form and function. Clay, after all, is the original recycled material, and it’s renewable, he told me with a grin – the earth is always making more. Kyle added these cultural throwaways to his clay assemblages, matching the colors of corporate advertising with the glazes on his low-fired ceramics. It was a perfect visual fit.

Turning recyclables into art then became a unique teaching tool when Hallam wrote and received Sprout Grant funding in 2011 to bring art to Greene ARC consumers and give them new avenues of expression. Under his journeyman’s eye, those who participated learned to safely cut squares and triangles from salvaged materials then reassemble them into patterns of their own making. It was a newsworthy venture and a chance to show the world the difference an artist can make, both in individual lives and in the community.

As we stood together in his downstairs workshop that day, admiring some of the pieces being readied for the exhibitions they would soon be in, he mused, “I’m very impressed that the people who are participating have taken ownership and are coming up with their own ideas and following through. That is what I hoped would happen and I’m very excited. I don’t see myself as an art teacher – I’m an artist teaching my art. This is a great opportunity for me to pass on some of my ideas to others.”

Ten years later, I headed up the long gravel driveway and into the trees again, not just to share stories with friends and family but to take a little bit of Kyle home with me.

“I was amazed by the volume of his art – the directions and range that I wasn’t even aware of,” Phillips said. The exhibit she helped organize that greeted us on July 31 was an explosion of color, texture and form – a visual, tactile celebration of life. Paintings and sculptures were everywhere, hanging from porch rafters, scattered on the lawn, covering the walls and tables inside the house. The extensive workshop had hundreds of items arranged on tables and lining the edges outside. It was a one-day-only exhibit that would soon be no more. Ellen’s invitation to friends said simply: “Kyle made it clear that he wants his family and friends to enjoy his work. No payment is needed but donations to the Humane Society of Greene County in Kyle’s memory will be greatly appreciated.”

Kyle’s love of all things bright and beautiful brought cheerful pumpkin-colored walls to the Greene County Humane Society, along with nearly a million dollars in fundraising over his thirty-some years as a volunteer. He will be sorely missed, director Jane Gapen said.

“He was amazing,” she added.

As I browsed and remembered, the beautifully whimsical “club house” Kyle built when he ran out of room for his work stopped me in my tracks. It was decorated inside and out with decades of creative output, happily showcasing Kyle’s skills as an artist and a carpenter with an eye for the wonderfully improbable. Kyle stood in that doorway ten years ago, smiling at me as I snapped the photo for the article I would write. In a few short minutes, friends would be removing the pieces one by one, but for this moment, it was all Kyle, a picture-perfect image filled with details that felt fresh every time I looked at it. The empty doorway grinned back at me as I took the shot.

I’m now a proud member of the Humane Society’s Power of Ten Club. Ten dollars a month will be coming out of my bank account for as long as I’m here to enjoy the sculptures in my garden, the Hallam-centric dog portrait on the wall and the colorful little obelisk that found its new home on my kitchen counter.