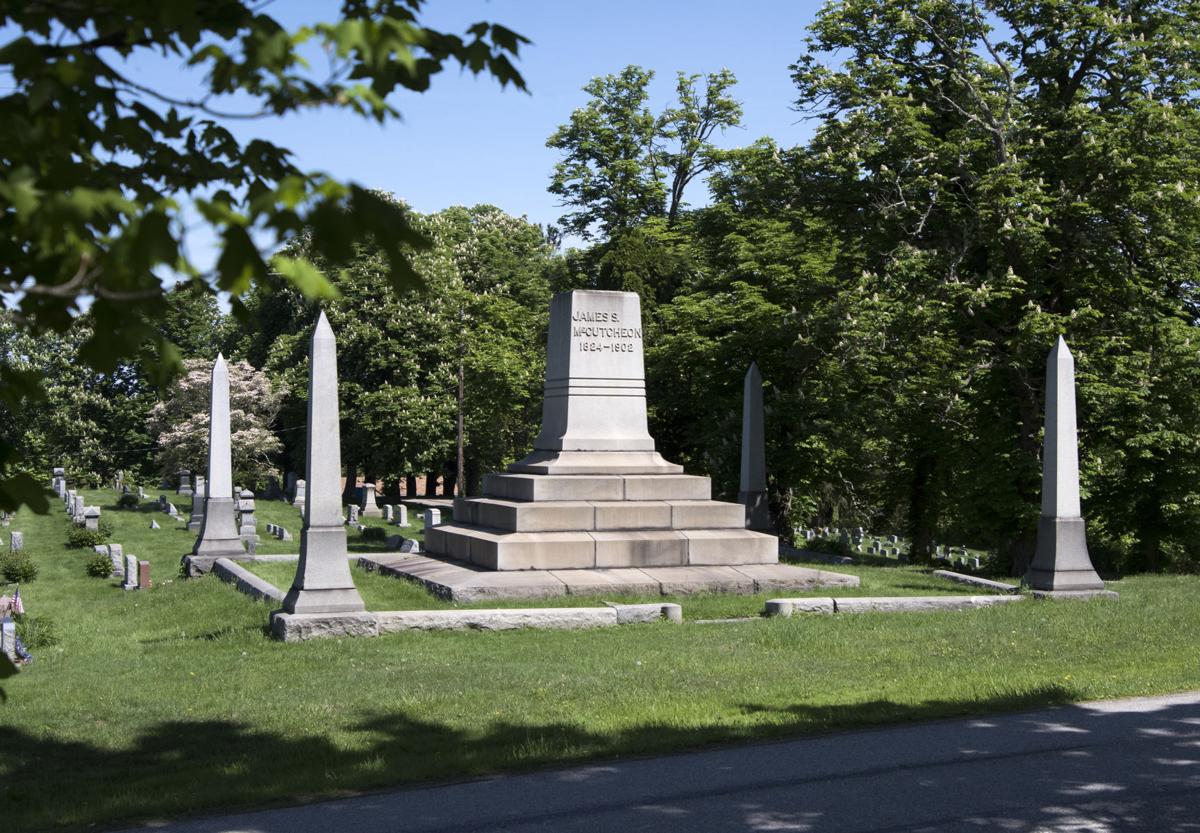 The McCutcheon Monument as it looks in 2019. 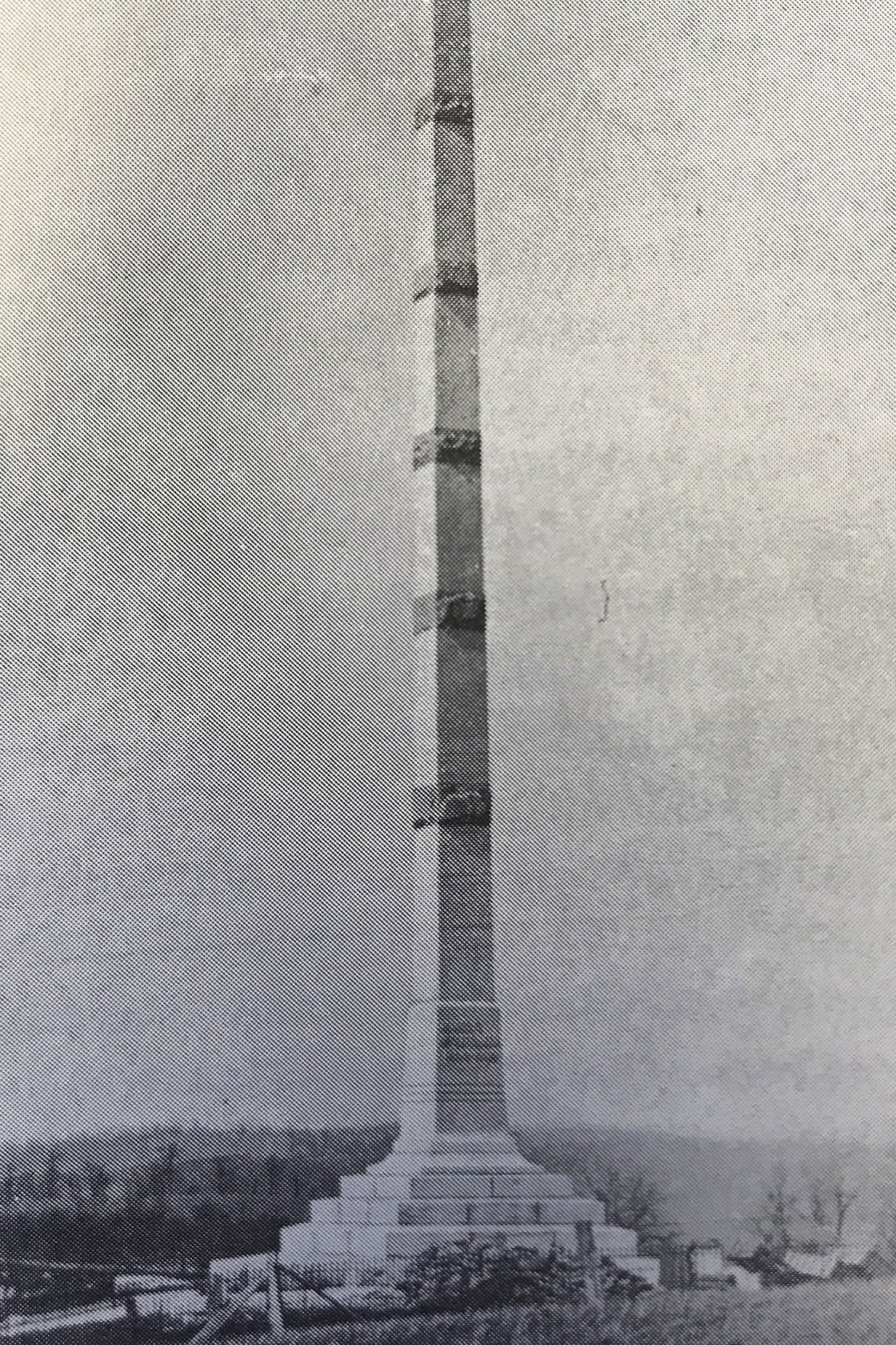 The McCutcheon Monument as it appeared prior to the 1936 tornado that damaged it.

It would be fair to say that James McCutcheon had an edifice complex.

Before the prosperous farmer and landowner in the Centerville area died in 1902 after a lifetime of parsimonious and eccentric behavior, he decided the world that he held at an arm’s length for most of his 78 years would not forget him.

Rather than using the dollars and cents he so carefully squirreled away over the decades to, say, endow a professorship at a college, support a church or otherwise engage in improving the world he was leaving behind, the never-married McCutcheon decided instead that his tombstone would be a monument to himself.

After McCutcheon took his last breath on Nov. 29, 1902, construction moved into high gear on what became known as the McCutcheon Monument in Taylor Cemetery, adjacent to the Taylor United Methodist Church. The monument, simply put, is impossible to miss. Facing Old National Pike and towering over every other grave marker in the cemetery, it is bordered by four spires that almost equal its height. McCutcheon’s name and dates of birth and death can clearly be read by passing drivers.

It stands out, that’s for sure. But for its first 33 years, the McCutcheon Monument was topped by a spire that could apparently be seen for miles. The spire that soared into the heavens made the whole monument, from top to bottom, about 75 feet tall. To put it in perspective, the Lincoln Memorial is 99 feet tall.

“I can’t think of any other grave markers in Washington County that are as unusual or as big as the McCutcheon Monument was at one time, or have the kind of backstory that it does,” according to Debbie Day, a Pittsburgh resident who has studied Washington County history.

Indeed, even though McCutcheon had neither the fortune nor the fame of contemporaries like John D. Rockefeller or Andrew Carnegie, he opted to outdo both of them when it came to his memorial. It’s not entirely clear why McCutcheon demanded such largess upon his death. When Connellsville’s Daily Courier reported McCutcheon’s end on Dec. 1, 1902, it noted that “several years ago it was rumored that he contracted for a costly monument to be erected over his grave at death. This rumor was never confirmed until this morning, when a paper ... was opened. The paper provides for the erection of a monument that is to cost $20,000 over McCutcheon’s grave.”

The notice concluded: “It will be carried out to the letter.”

According to “Center to Centre,” a 1996 volume that celebrates Centerville, McCutcheon worked as a farmhand and stashed his money away. He was eventually able to purchase 127 acres of land near the cemetery, and then a $9,000, 134-acre farm where he kept the world at bay “in a fine old brick house built before the Civil War.”

Also, according to “Center to Centre,” “There are many tales of McCutcheon’s miserly nature, none of which can be confirmed. Folks claimed that he slept on a pile of straw, walked across the Monongahela River on the ice in the winter to avoid paying the toll, donated only a dime to the church missions, and once gave a dozen teaspoons as a wedding present, which he bragged cost him every bit of a dollar.”

McCutcheon undoubtedly hoped that his monument would be a sturdy, enduring reminder of his existence for hundreds of years. But in its full form, the McCutcheon Monument lasted only a little more than three decades. On July 27, 1936, a fearsome tornado swept through parts of Washington County, killing at least one person and damaging scores of properties, including Taylor United Methodist Church. The spire atop the McCutcheon Monument tumbled, leaving only the still-sizable base intact. And this calamity exposed a crucial oversight in McCutcheon’s planning. While he left behind enough money to build the monument, not enough was left for its maintenance, so it was not rebuilt. More than 80 years later, no trace remains of the spire that topped the McCutcheon Monument.

But what is left is still formidable. The base now has some cracks running through it, with vines and weeds creeping out. Nevertheless, it still looms over nearby stones that feature names like Sesco, Kinchins and Konjolka.

“At the time the memorial was first constructed, and for several years after, including when it was mostly destroyed by the tornado, McCutcheon was remembered, although I’m not sure it was in a positive way,” Day explains.

McCutcheon has now receded into history, remembered primarily by people like Day who like roaming in cemeteries and researching local history.

However, Day points out, that if the monument was still standing as it was originally constructed, “that might be different.”