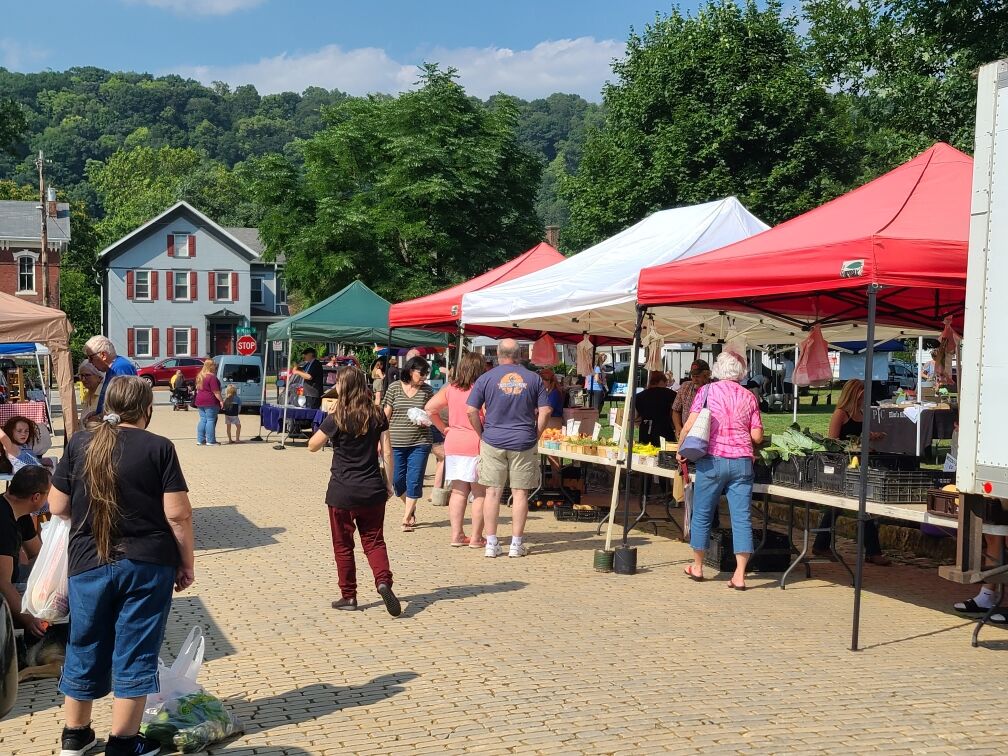 The Harden Farms tents are always popular at the Monongahela Farmers Market, as shown in this photo from the July 30 event. 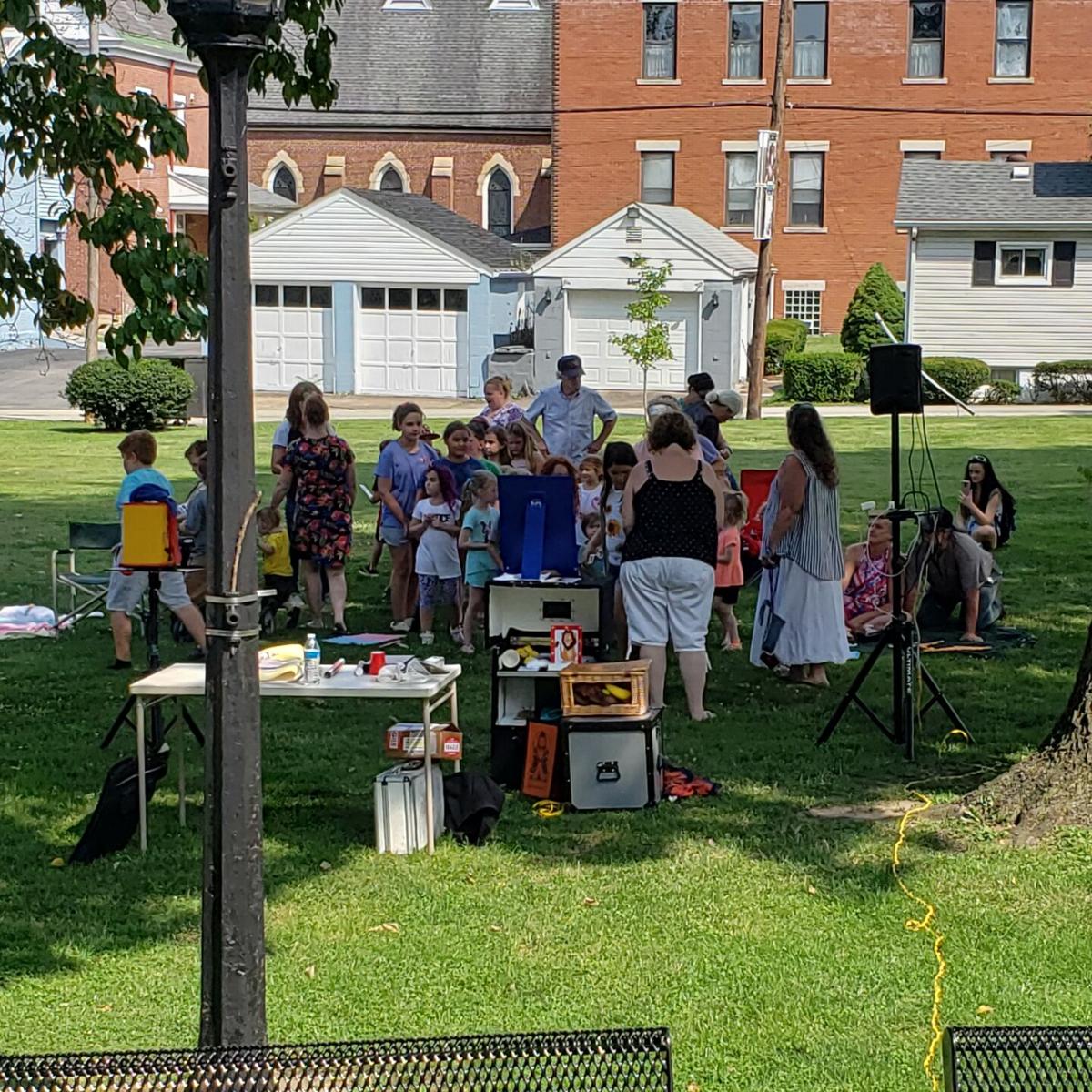 Children gather for a magic show at the Monongahela Farmers Market. 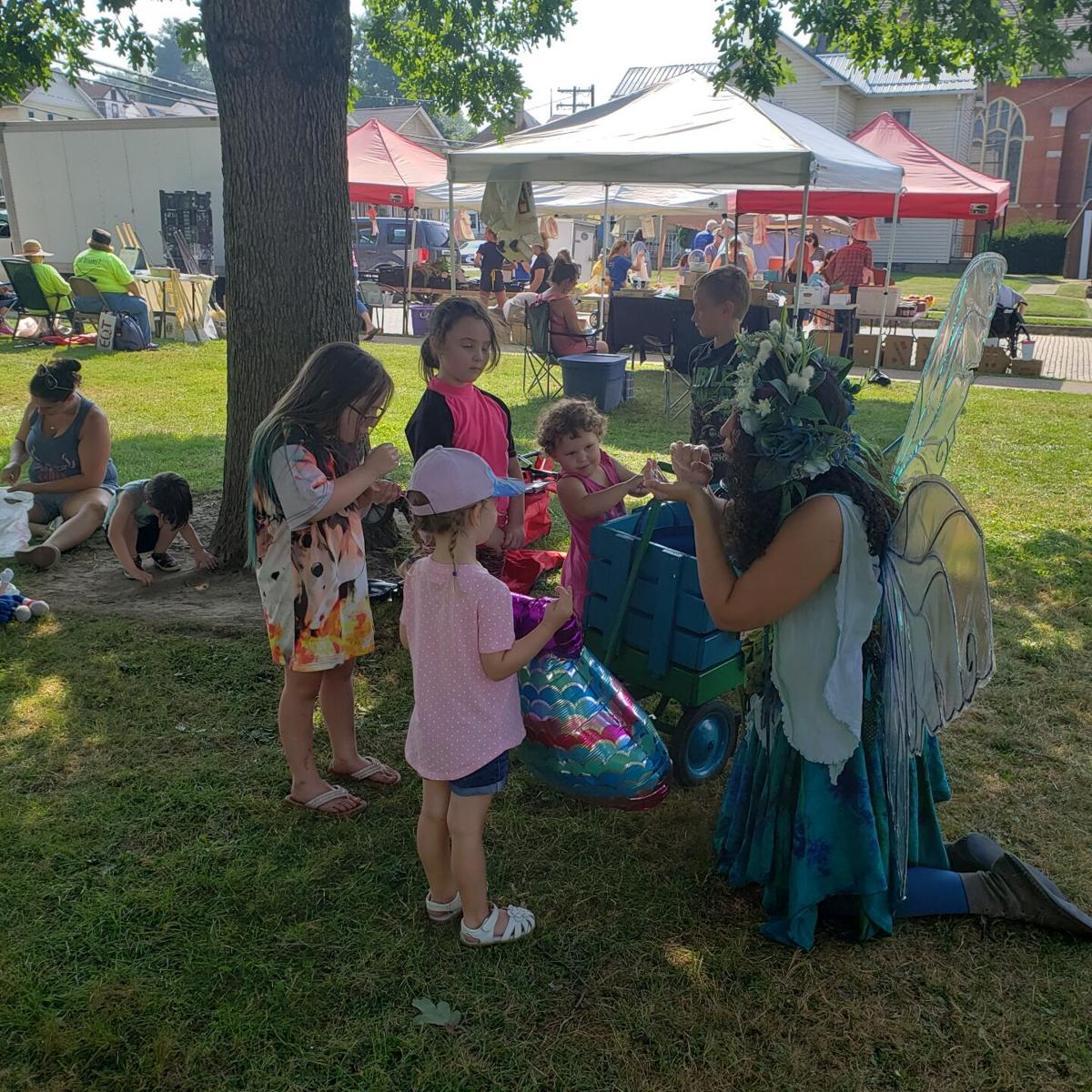 Whimsey the Fairy blows bubbles for the children at a recent Monongahela Farmers Market.

The Harden Farms tents are always popular at the Monongahela Farmers Market, as shown in this photo from the July 30 event.

Children gather for a magic show at the Monongahela Farmers Market.

Whimsey the Fairy blows bubbles for the children at a recent Monongahela Farmers Market.

As far as Fred McConn can remember, he’s been taking fresh produce grown on his 50-acre Harden Family Farm to the Monongahela Farmers Market for about 15 years.

With help from his wife, Sheila, family and friends, he loads his 16-foot box truck with everything from collards, kale and cabbage to corn, tomatoes, green beans and more.

When he gets to the market, run by the Mon Area Revitalization Corporation, a 501c3 nonprofit, he sets up a pop-up tent and puts his produce on display.

“While the business has grown over time, this year’s been the best ever,” McConn said. “To keep our produce as fresh as possible, we pick it under 36 hours of market time.”

Ten years ago, he added Chambersburg fruit to his inventory, which includes the region’s much sought-after peaches, along with plums and a wide array of apples. McConn, however, is only one of five farms that set up a sales tent at the market in and around Chess Park from 3 to 6:30 p.m. every Friday. This year’s 16-week season opened on June 11 and will close on Sept. 24.

“Our vendors include a mushroom farmer and a micro green farmer, along with vendors who sell chicken and duck eggs, honey, maple syrup, even goat milk soap,” said Michelle DeHosse, market chair from Monongahela. “We have a core of 15 vendors who are with us throughout the summer, but have had as many as 28 who come and go throughout the season.”

One new vendor this year, Sweets by Mrs. C, short for Mrs. Claus, serves individual cups of ice cream, ice cream sandwiches and floats made with retro bottles of sodas with brand names like Red Ribbon, Boylan and Jones.

Owner Heidi Hoffman runs a brick-and-mortar shop a few blocks from the market and has been seen wheeling her ice cream cart from her Christmas-themed confectionery through Monongahela on market days.

Currently, she uses her vehicle to move her cart topped with a giant umbrella to the Friday event, where she offers between six and ten flavors of ice cream made by Betsy’s of Mt. Lebanon.

“I joined this year because I love being part of the vendor community and hearing all the great live music that’s included in the event,” she said. “Business has been better than expected, and I hope to be back next summer with an updated cart.”

According to DeHosse, the Grumpy Mexican has been a popular favorite, as is Forlini’s Italian Kitchen and Noopy’s Sweet Shop, which offers the sine qua non of festivals and events, the ubiquitous funnel cake.

“Between them all, they give Chess Park an extra good aroma,” said DeHosse. “I’ll often eat my way through the park starting with a sausage sandwich or two steak tacos and a sip of wine from the Winslow Winery of Perryopolis and ending with a brownie from Sambol’s Bakery or a funnel cake from Noopy’s.”

Besides food, other vendors sell commodities like candles, jewelry, laser engraved signs, bath balm and shower steamers. Non-profits and charitable organizations like the Monongahela-Donora Lions Club, which sells brooms, Big Brothers Big Sisters and Blueprints Early Learning, are allowed to set up for free. However, most commercial vendors pay a variable fee depending on the number of times they participate during the season and vendor type.

By 11 a.m. each Friday, DeHosse publishes a list of vendors and products on the market’s Facebook page. Each week, Mon Valley Academy of the Arts also schedules the live entertainment, which starts at 4:30 p.m. One Friday, local country radio station Parkway 106 streamed live online from Chess Park during the market.

Wanting to touch all the bases, market organizers also provide entertainment for children starting with Whimsy the Fairy, who brings with her a large bubble-making machine, and Levona, a creator of balloon animal figures.

“I’m trying to have the market go out this season with a bang and make it a children’s event,” DeHosse said. “Canine officer Kris Salzmann will bring in a dog, Sammi, from the Washington County Sheriff’s Office, the Monongahela Police will exhibit a new patrol car and the New Eagle Volunteer Fire Department will bring in one of their trucks. Additionally, the Monongahela Library will organize a children’s activity, and I’ll try to arrange a couple more things to amuse the youngsters.”

DeHosse said this year’s attendance has been excellent. Early this summer, Harden Farm told her they had sold out by 5:15 one Friday afternoon. The bakery, ice cream vendor and mushroom farmer usually also sell out by the end of the day, which is why DeHosse advises coming early to make sure patrons get what they want.

Claudia Michalic, a patron who’s been a regular and a firm supporter of the market, said she used to go to the markets in Somerset County and Ligonier to buy her daughter, who suffers from kidney failure, organic food. However, she said the Harden Farm has been able to provide her with the necessary products, including eggs. When the market is dormant in the winter, she uses food bought from Harden Farm at the market that she stores in three freezers she keeps in her home.

Besides getting the food her daughter needs for her health, Michalic said she is pleased to show up at the market each week, where she’s grown to know the vendors personally.

“In addition to being able to buy fresh food, I always see a lot of friendly faces,” she said. “They help make the market a place of community and genuine fraternity.”