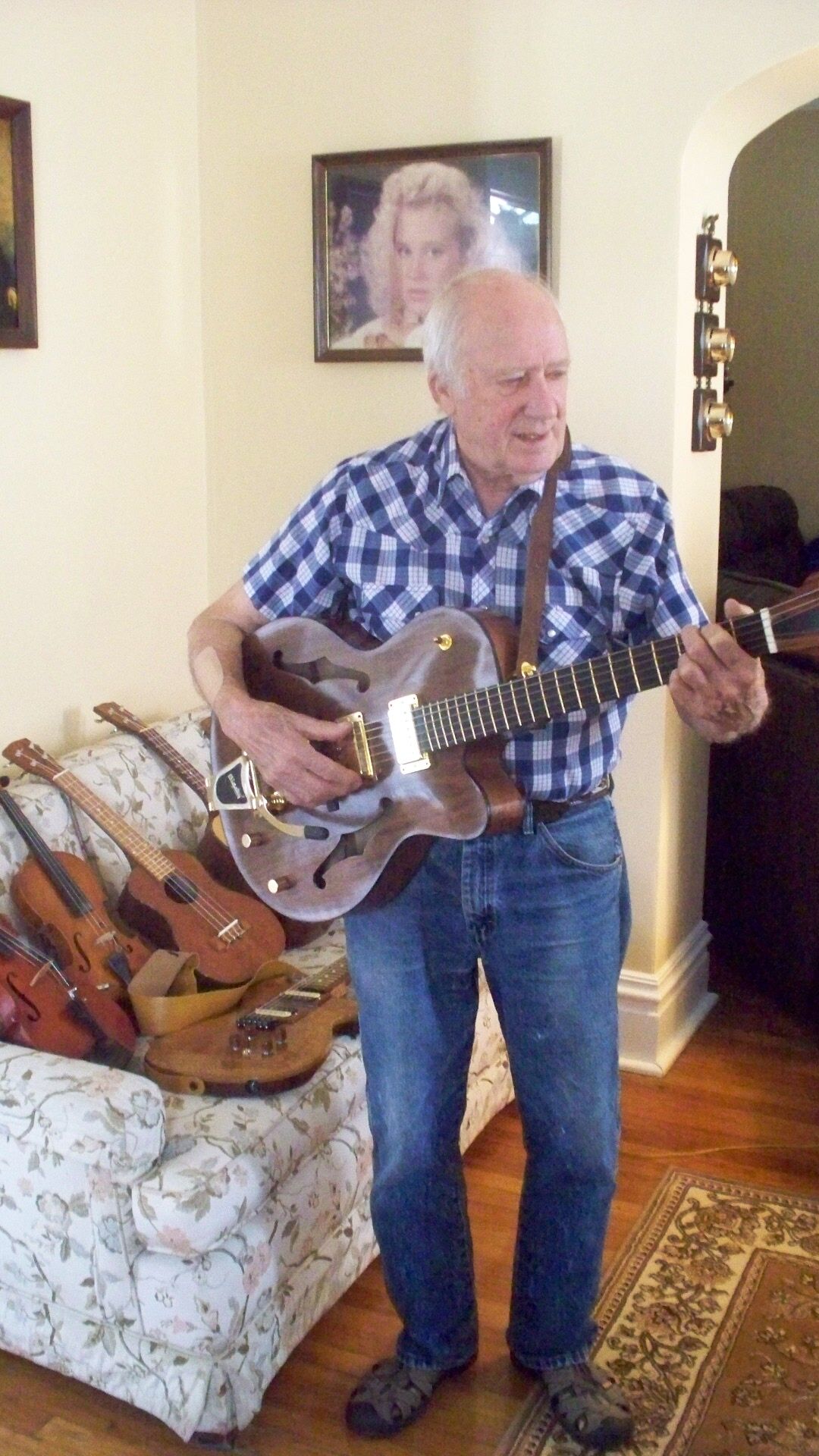 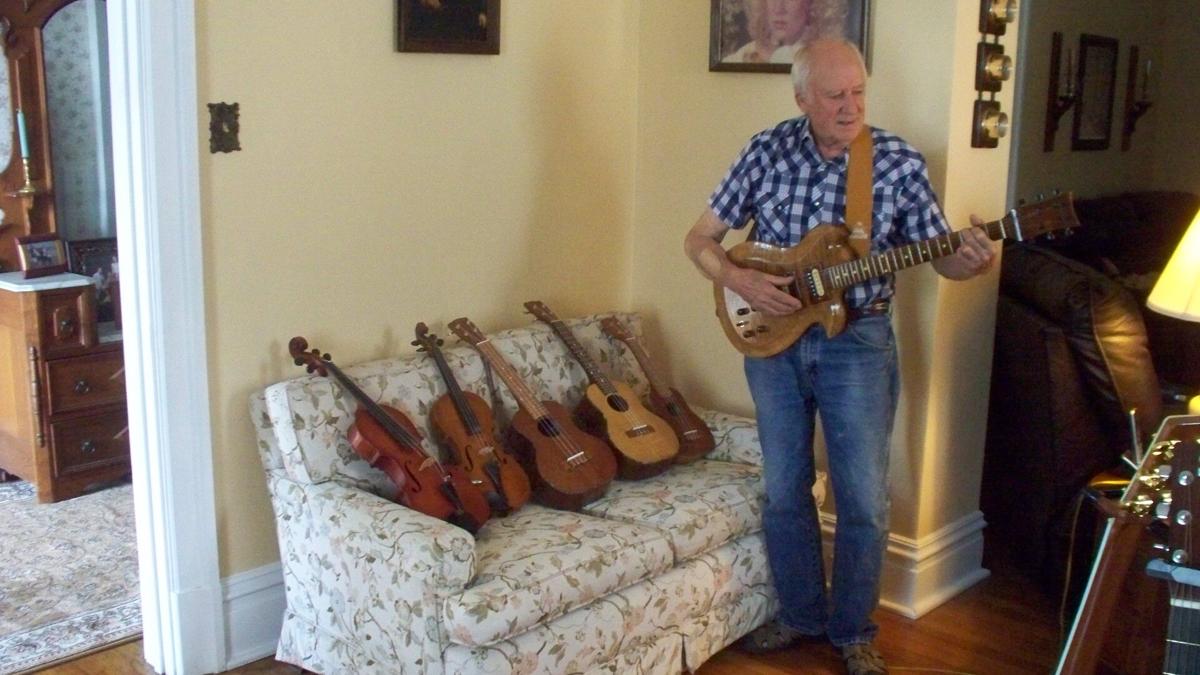 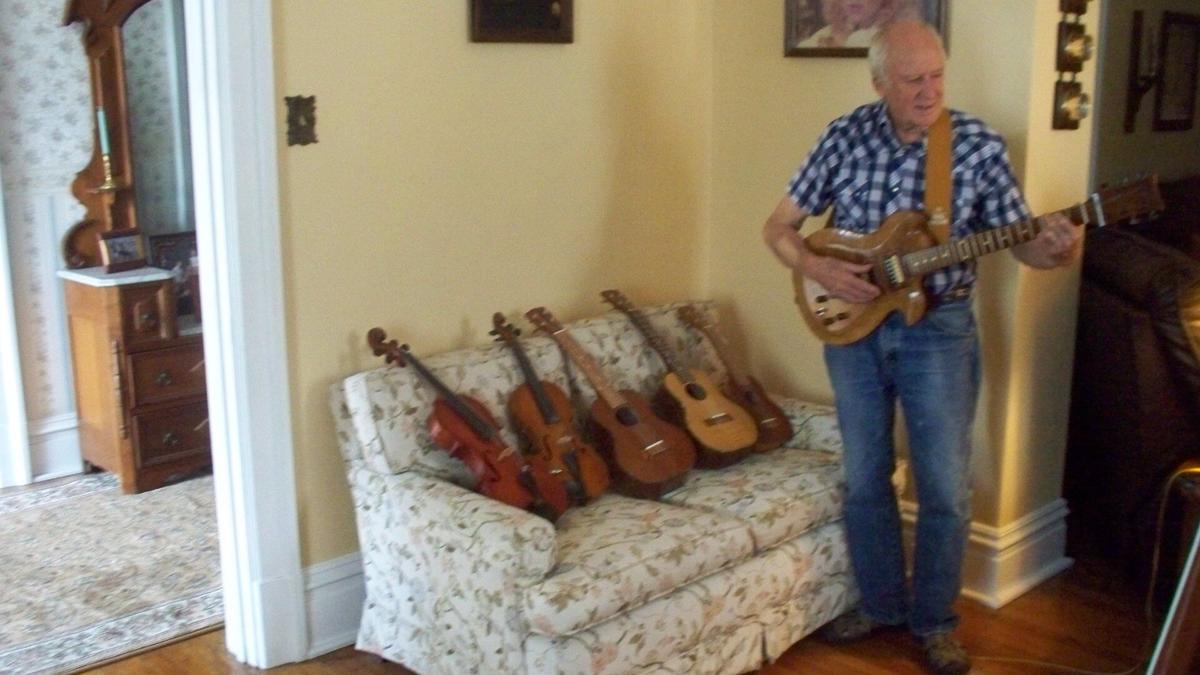 Over the years, Brownsville woodworker Darrell Smith has made everything from rocking horses and violins to lawn ornaments, furniture and violas. Now at age 81, he’s built his first jazz guitar “from scratch.”

Smith started his craft – you might also call it his art – at an early age when he made lawn ornaments in his father’s workshop. He still has a wooden car he made as a youngster just cutting his teeth in a skill he’d hone over his lifetime. However, a seventh-grade shop class proved to be a major milestone when he said he learned everything he needed to know in life from his teacher, Robert Callen.

“He taught me how to do things, to visualize what I was making and to be responsible,” he said.

So impressed with what he’d learned in class and from his teacher, he wrote an essay on the subject while in junior high. It’s something he’s pulled out of storage again and again over the years, just to refresh his memory.

Following his graduation from California University of Pennsylvania in 1961 with a bachelor’s degree and a master’s degree in 1965, Smith, a native of Kittanning, went on to earn a Ph.D. at Texas A&M in College Station.

In 1968, he returned to his alma mater and started teaching in the industrial arts department, now called the science and technology department. His academic career would continue at Cal U. for the next 36 years until his retirement in 2004.

Another meaningful experience came knocking around 1960 when he was an undergrad. Then, a visit by John Shell, a violin maker from Connellsville that the university invited in to give a lecture, inspired him. Even though Shell said it took 450 hours of work to carve the stringed instrument into its intricate shape, Smith made one of his own a few years later.

It was the only violin he ever made, although he did follow up with something similar, a homemade viola.

Somewhere in the early 1990s, Smith decided to try his hand at guitars. His granddaughter, Maeve, had a friend whose father operated a sawmill in the mountains past Farmington. Smith told her to ask if he had some curly maple, “a beautiful wood that’s real popular and one the players really like.”

When he found out some of the precious wood was available, he drove up to the sawmill and returned home with enough to make 16 guitars by 2013.

“I made one for each of my 13 grandchildren, although only two of them play,” Smith said. “Because I consider them family keepsakes, I told them there was one stipulation – that they couldn’t sell them or give them away. After that I got pretty quick at making them, although I have no idea how long it takes me to finish one. I never kept track.”

An accomplished musician, Smith has played in a band ever since high school. For the last 12 years, he’s played his self-made guitar and the fiddle with the Outpost Band, a quintet that performs a mix of country from the 1960s and old rock and roll. Since the coronavirus hit back in March, the band has been on performance hiatus but hopes to get back on board once the epidemic has subsided.

Considering his long career and the number of things he’s crafted, he’s amassed many woodworking tools. These he keeps in a 30-by-34-foot workshop in the basement of a large garage in the back of his house. In the late 70s, his skill enabled him to add a sun porch to his home with big beams he made from two-by-fours. He also made wooden rocking horses for his children and a big one for himself in 1981, “just for fun.”

Following his retirement from his academic career in 2004, he “just hung loose” until his wife, Joyce, told him he needed something to do. Four years ago, when his daughter, Stacy, and son-in-law, Joe Carey of Uniontown, moved into a new house, he got back into his craft by making them a dining room table and 16 chairs as well as a vegetable storage unit and a set of candlesticks.

Recently, he started his latest project, building an archtop, hollow body guitar, instead of the sold body guitars he made in the past. Since finishing the guitar on July 20, it’s become his favorite thing to make.

While Smith’s repertoire of finished wooden articles is as extensive as his woodworking career, he said he’s never sold anything he made.

“Most of what I did was for my kids,” he said. “While I would have sold some of my smaller rocking horses, there were no buyers around at the time.”