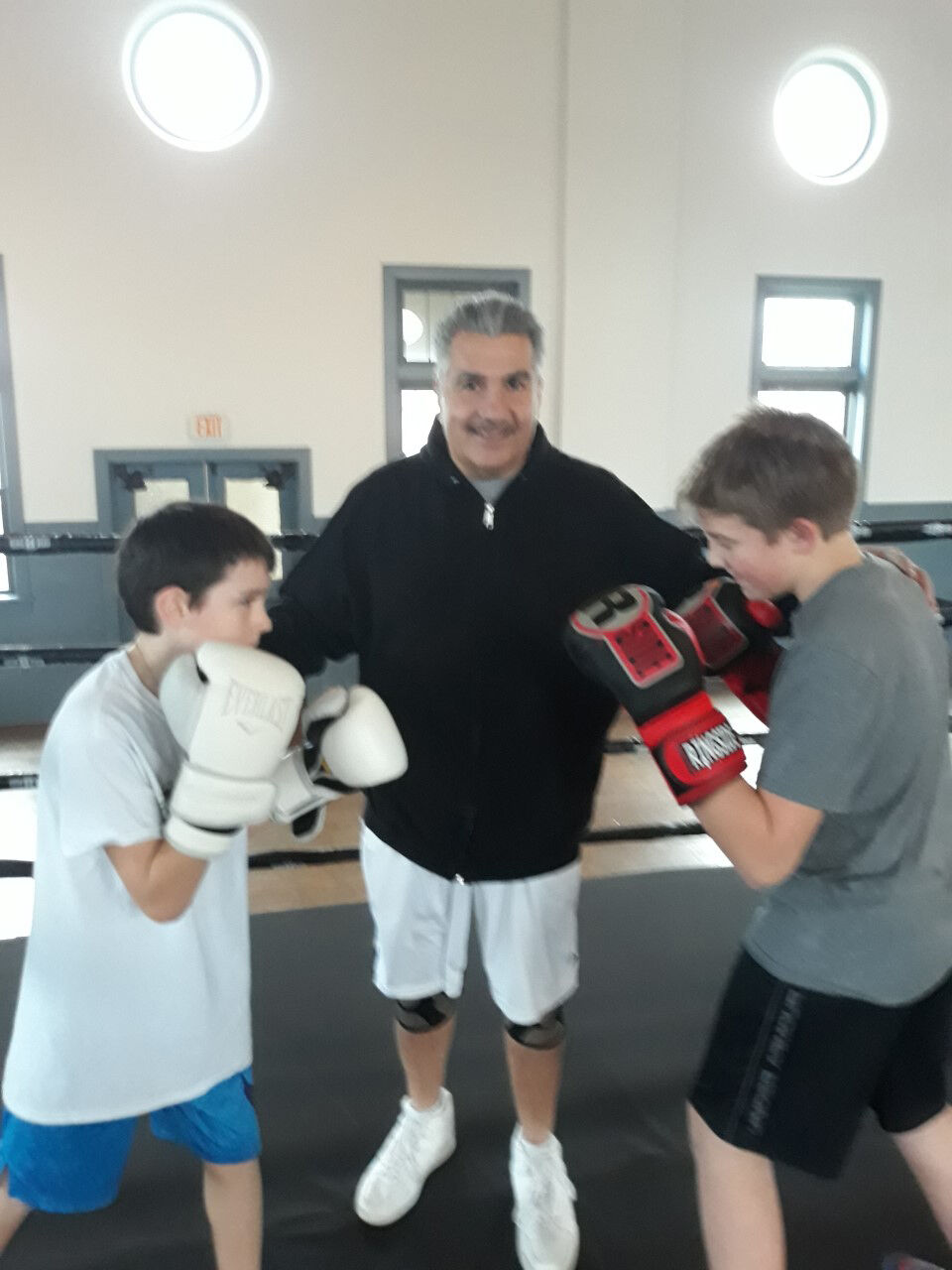 George Galis, owner of G Force Athletic Club, poses for a picture with a couple of youngsters involved in his program, Kayden Irwin, left, and Cole Konek. 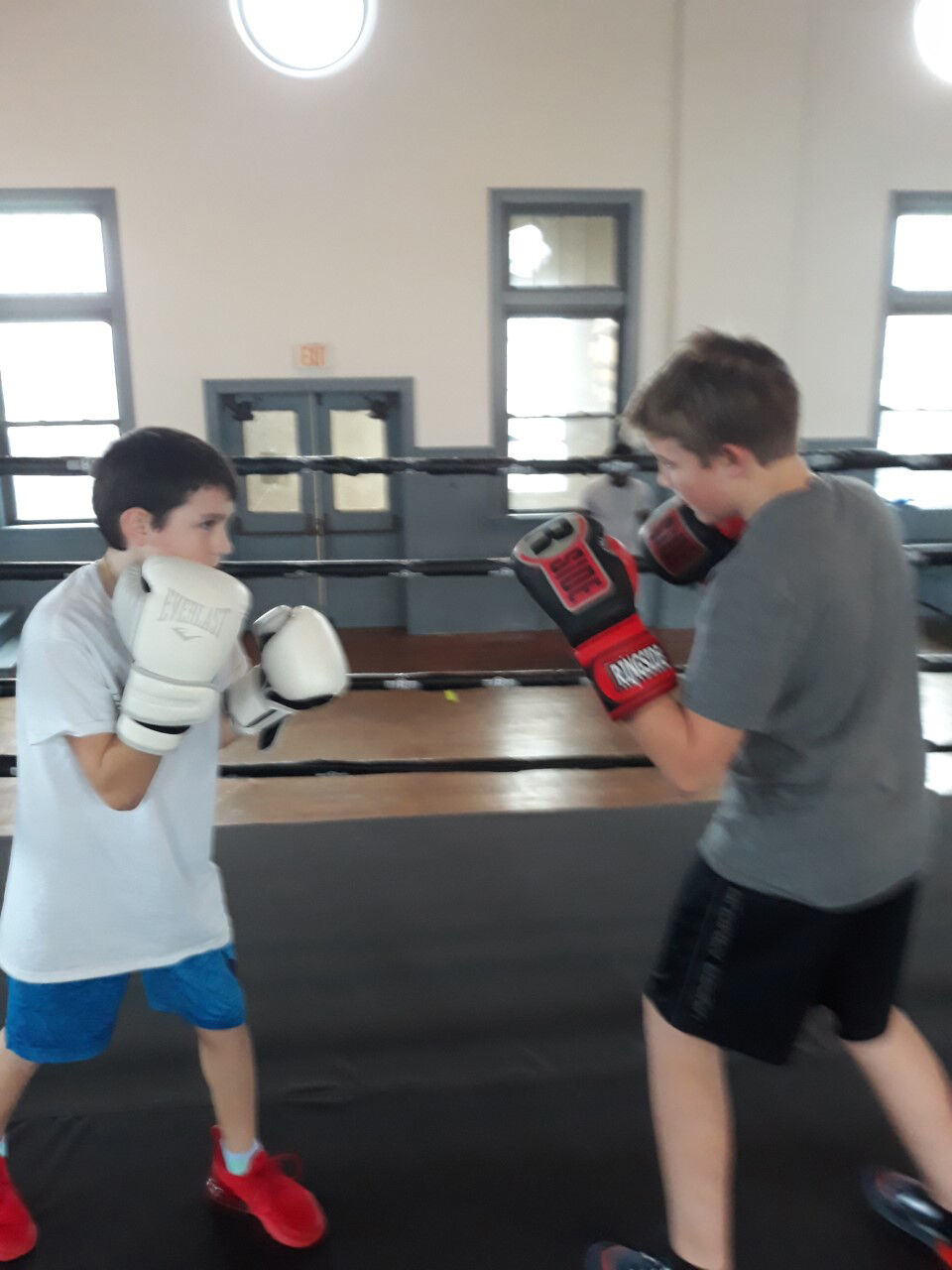 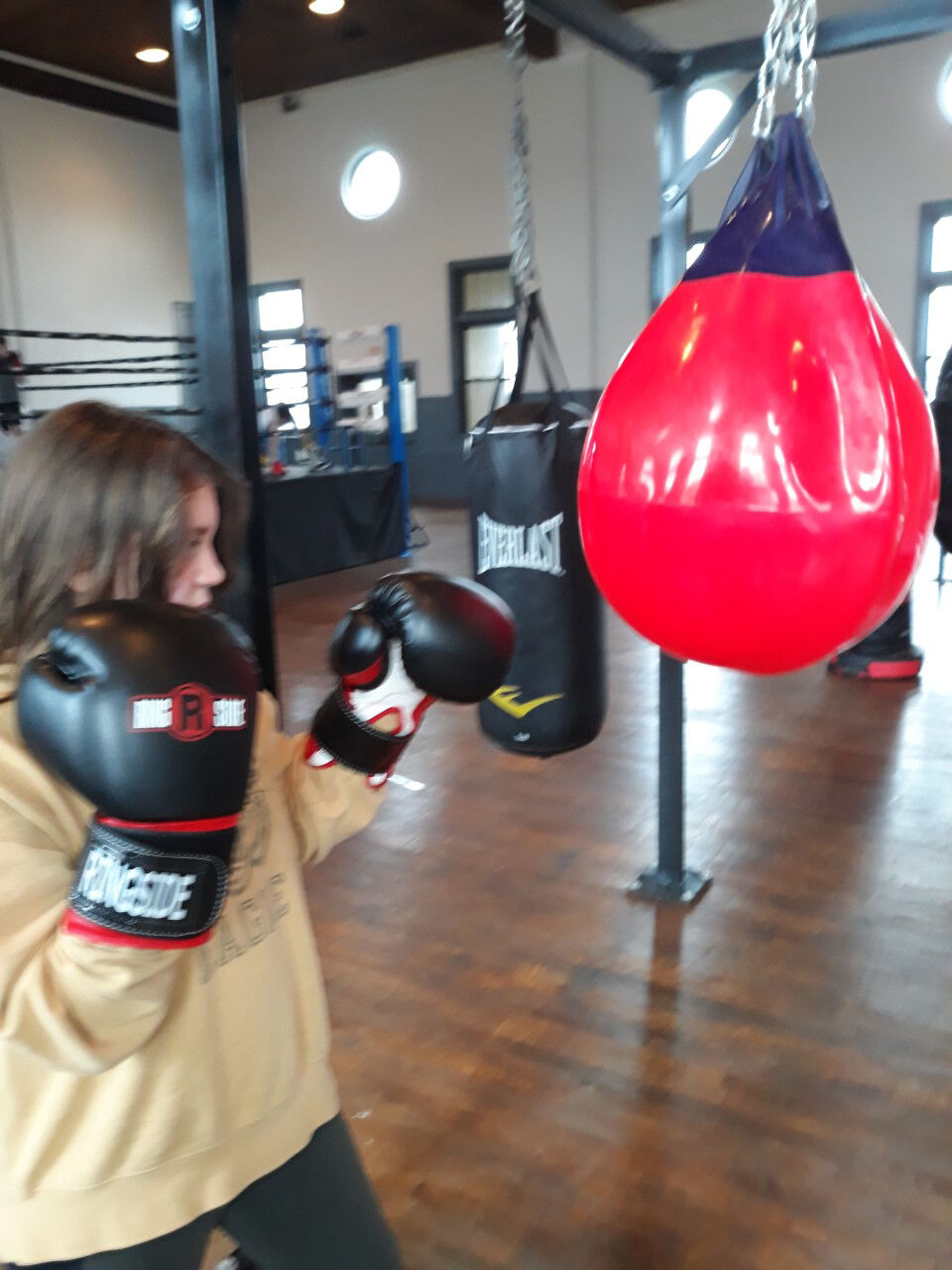 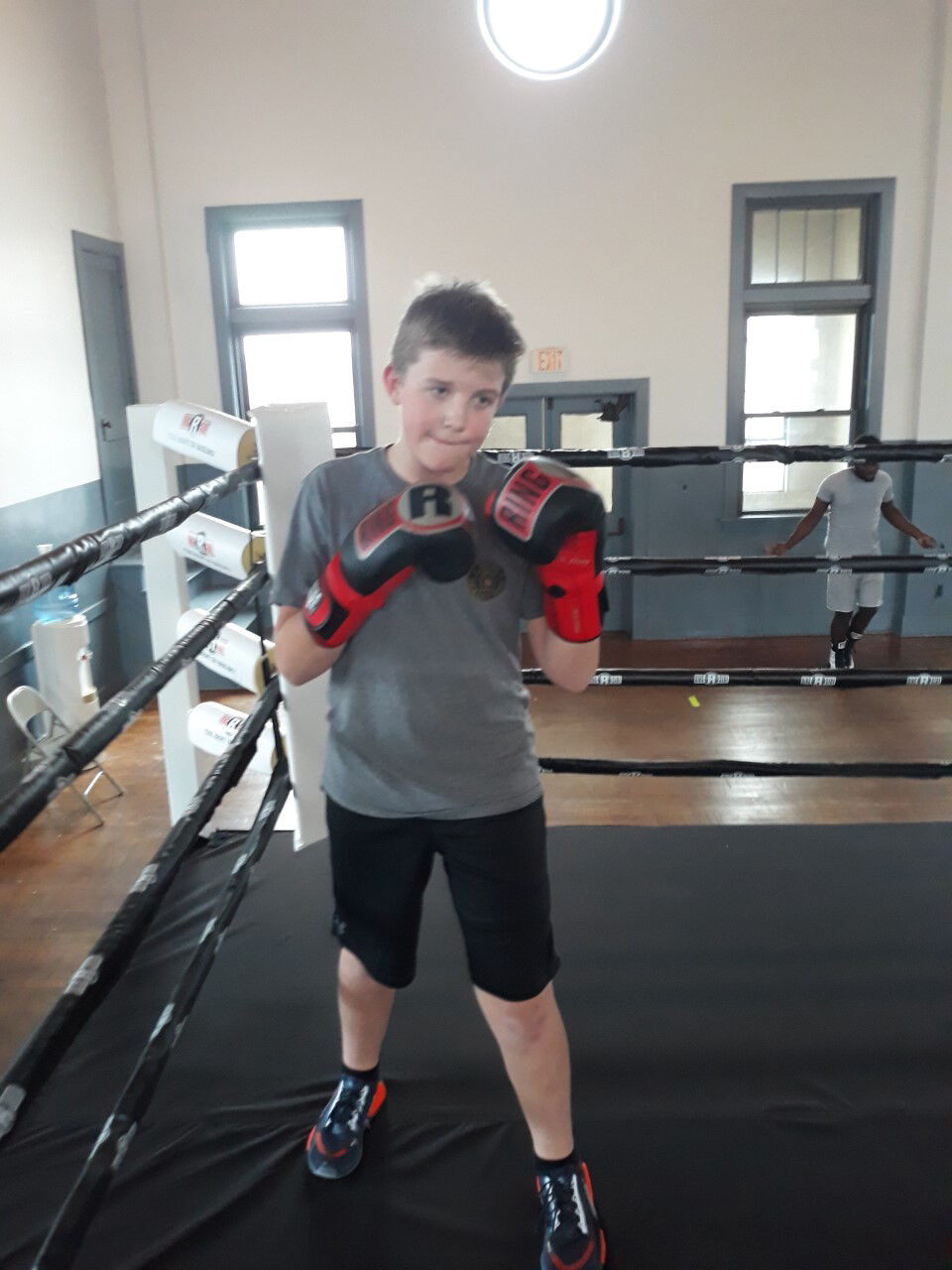 Cole Konek stands in the ring at the G Force Athletic Club in Charleroi. 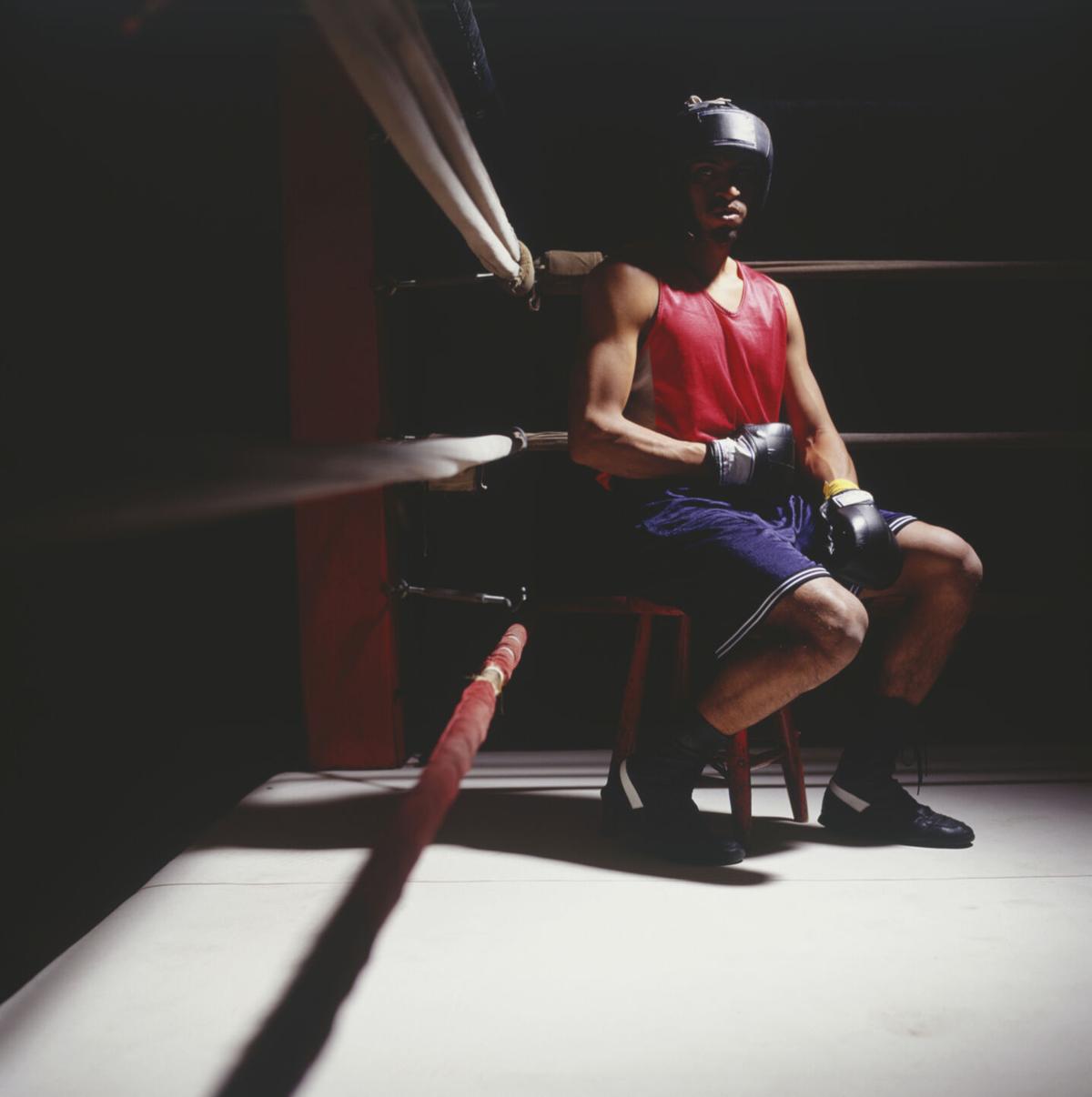 George Galis, owner of G Force Athletic Club, poses for a picture with a couple of youngsters involved in his program, Kayden Irwin, left, and Cole Konek.

Cole Konek stands in the ring at the G Force Athletic Club in Charleroi.

The story of the new G Force Athletic Club in Charleroi actually goes back about 50 years.

That’s when 15-year-old George Galis began boxing at the original Charleroi Athletic Club on the third floor of the Charleroi Borough Building.

Flash forward 50 years, and the Monessen native has been teaching the art of the sweet science to youngsters at the G Force Athletic Club since October. Its location just happens to be the third floor of the Charleroi Borough Building.

Galis, 65, initially sought a building in Monessen for the club but couldn’t find one suitable.

“Then I spoke to borough council folks in Charleroi, and they let us use this space,” he said. “We’ve patched all the walls, painted it and we’re having new lighting put in.”

Boxing and the original Charleroi Athletic Club have been important to Galis. He actually ran the club when it was located in the old Crest Avenue Elementary School basement. That building was eventually converted into apartments for seniors.

As he sought a new location, Galis was promoted in his job with the International Union of Painters and Allied Trade (IUPAT), which forced him to move to Maryland, where he lived for nearly 20 years. He retired from that job in September and got back to the process of opening a gym.

“Even before I retired, I knew that I wanted to start a gym,” Galis said. “I didn’t care if I trained any pros or not. I wanted it to be an after-school program for kids.”

G Force Athletic Club is a non-profit organization that fundraisers and donations have sustained financially.

“So far, mostly donations,” Galis said, adding that a lot of money has come from IUPAT’s charity arm. “They’ve given me most of the money, but I’ve gotten probably seven or eight other substantial donations.”

Each kid registers for USA boxing, which provides insurance should an injury occur. It also is necessary for someone to participate in a sanctioned bout.

“That was my concept,” Galis said. “That and doing a little Bible devotional each day. I want to introduce these kids to Jesus.”

Galis said the number of kids that come each day varies. There could be anywhere from 2 to 25 showing up on a different day.

Galis is receiving help in getting these potential boxers ready for the sport. Folks helping him include George Ross, Mike Opalinski, Mark Schrader, Rueben Brown and Troy Moore.

However, the other coaches are not always available, and there are times when Galis is the lone instructor.

“Some nights I’m really running around, because boxing requires individual attention,” Galis said. “Little bad habits can form fast. When I have a lot of kids in the gym and I’m the only one, I’m moving around.”

Kids ranging in age from 8 to 15 from all over the Mon Valley have been coming to the athletic club.

The club is open Monday through Friday from 3 p.m. until about 5 or 5:30 p.m. and on Saturdays at 10 a.m. Galis did say he may cut Fridays from the schedule since so many of the kids like to attend high school sporting events.

There is no charge for any kid who wishes to participate. It’s Galis’s way of paying it forward.

“When I started boxing way back, if they had told me there was a fee, I wouldn’t have been able to go,” Galis said. “I wanted to make sure these kids weren’t going to be asked for a fee.”

By the way, Galis was pretty good in the ring in his younger days, posting a 43-8 record in amateur bouts.

All any interested party has to do is come to the facility on 338 Fallowfield Ave.

Those who have been coming seem to be taking to the sport and enjoying their time at the gym.

“It’s fun in here,” said Kayden Irwin of Charleroi after some work in the ring. “I like the sport of boxing. I’m always watching clips of famous boxers. It just got me interested in doing it.”

The favorite boxer of the 12-year-old just happens to be “The Greatest,” Muhammad Ali.

Cole Konek, 12, of Monongahela, was just looking for a winter sport in which to participate.

“I like it,” he said. “It gives me something to look forward to after the school day.”

Jacie Lipari, 12, of Charleroi, heard about the club from a friend.

“I decided to come down and it was fun,” she said. “It’s fun and it’s a good workout. It’s something to do.”

Galis has seen the kids come for many different reasons.

“It’s not for everybody,” Galis admitted. “I have some kids who come in and treat it more like a social club. I’m not turning them away, because maybe they just need somewhere to be. Most of the kids really want to do it. They work hard and they listen.”

He also admitted that none of the kids are ready for an amateur bout yet, but some are getting close.

Galis hopes to eventually expand what is available at the athletic club.

“I’ve got some weights in there, but I need a weightlifting coach and more weightlifting equipment for kids that don’t want to box, but still be in a safe space to go after school,” he said. “I also have a few retired teachers who’ve agreed to help if there’s any kids who need tutored.”

Galis also hopes someday to host a show locally featuring some area kids in the ring. A show he hosted in 1991 at Charleroi Area High School featuring professional boxers drew a big crowd.

But the main goal Galis has is quite simple.

“I want to see if we can help these kids stay on the right road,” Galis said.