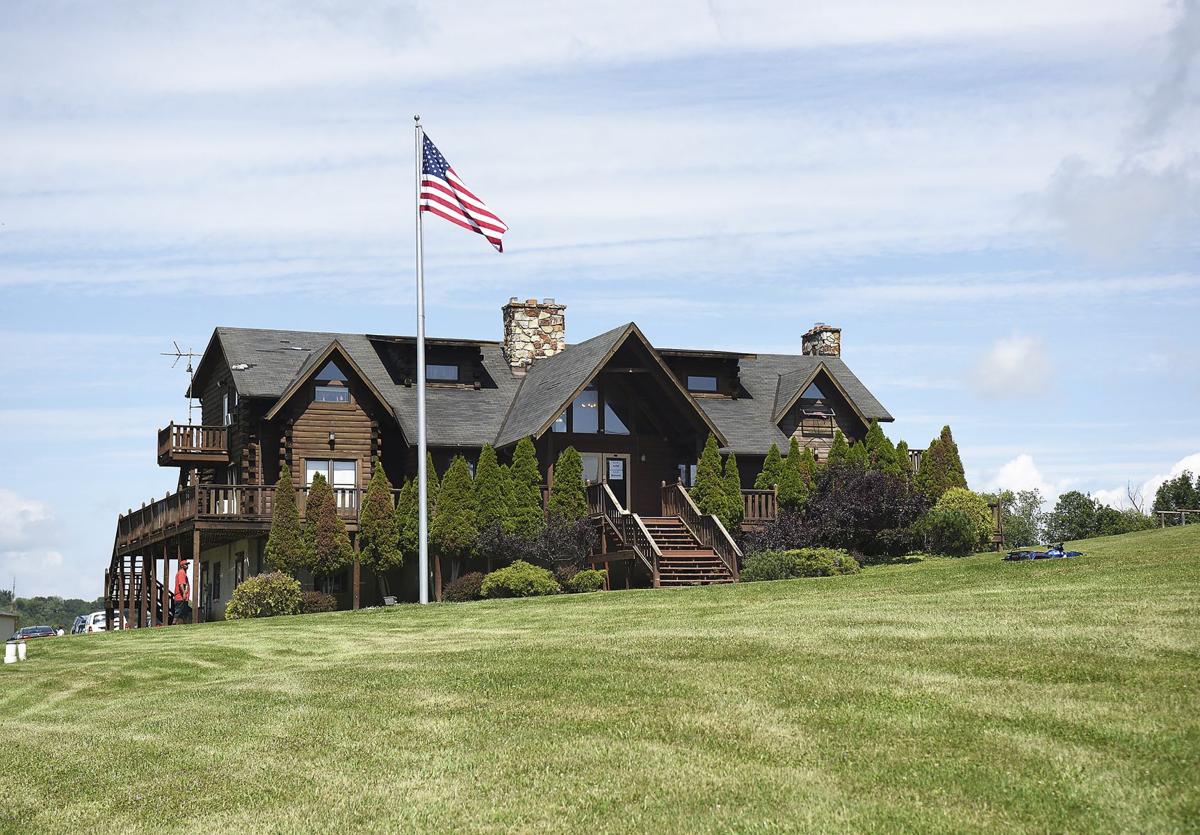 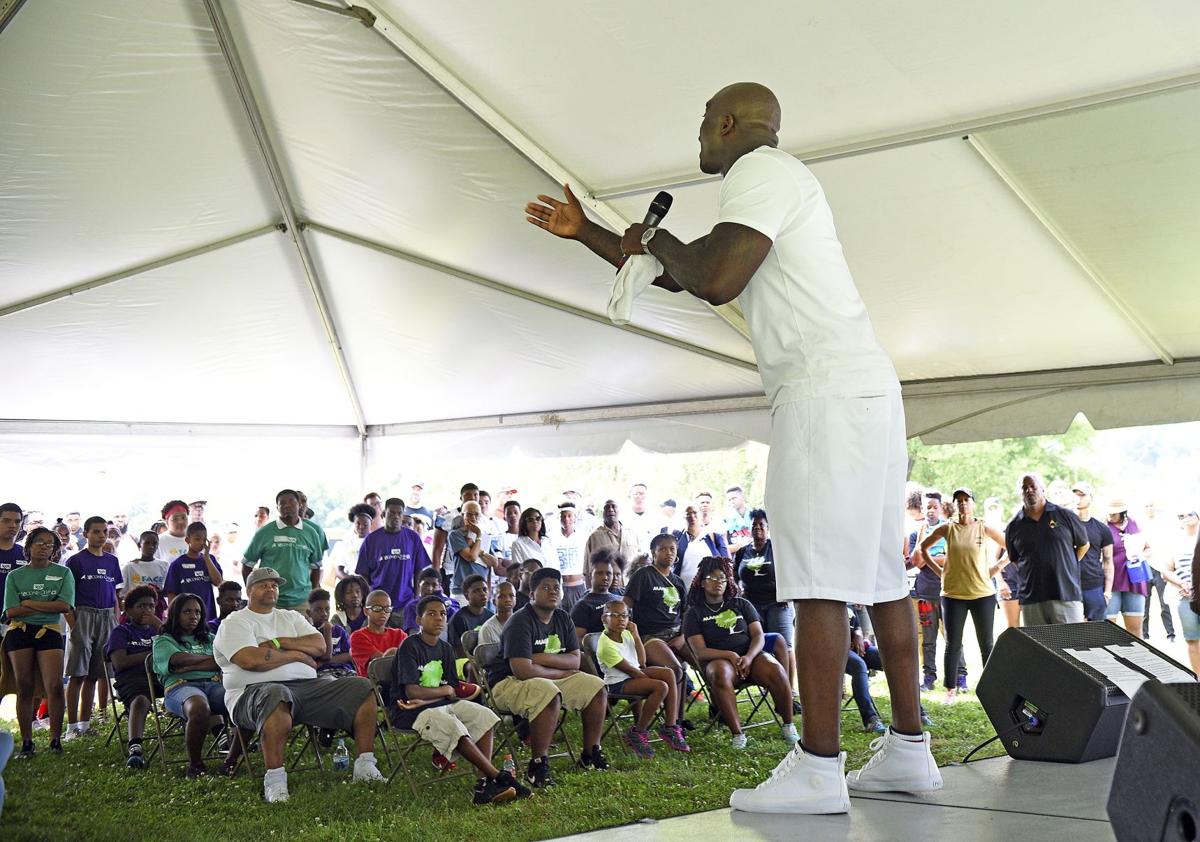 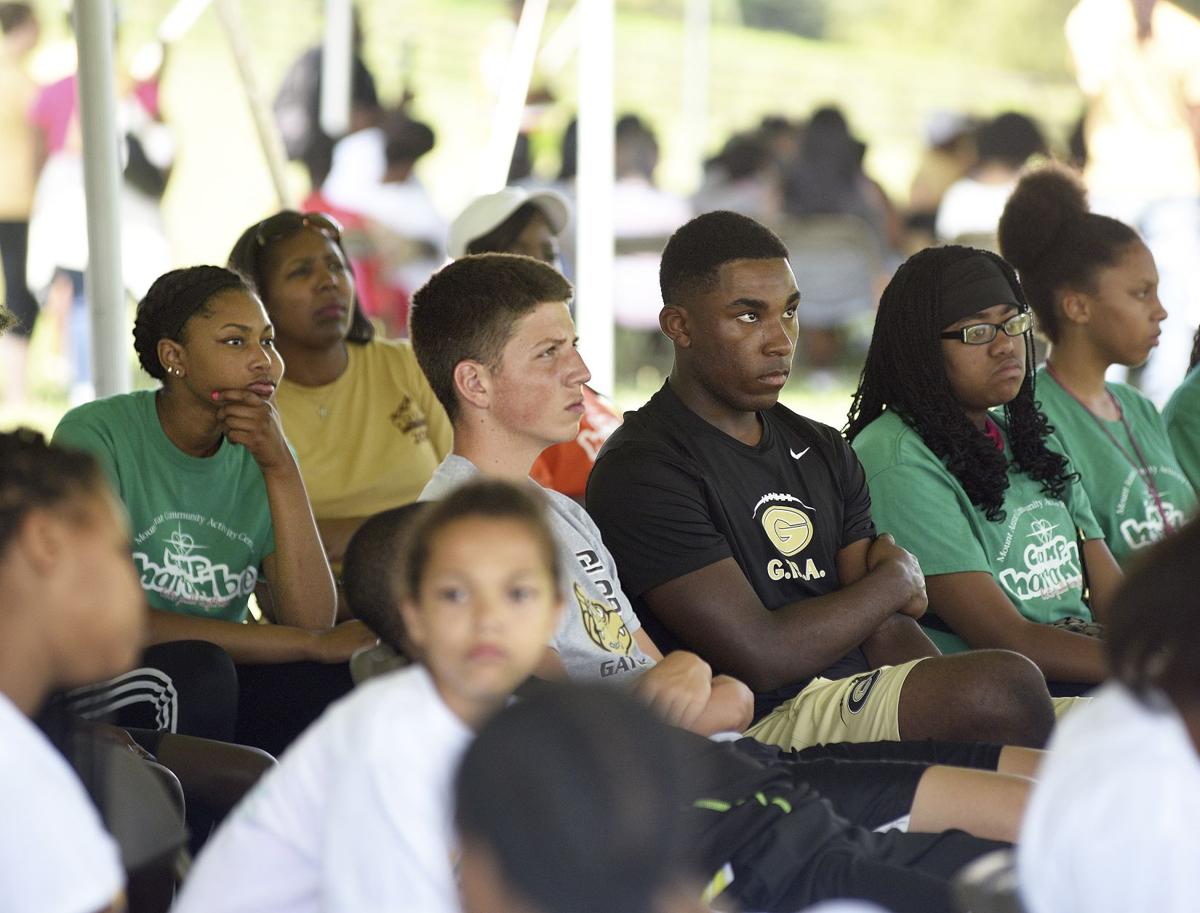 Young adults listen to a speaker during a workshop session at the 2016 Youth Summit at the Mel Blount Youth Home. 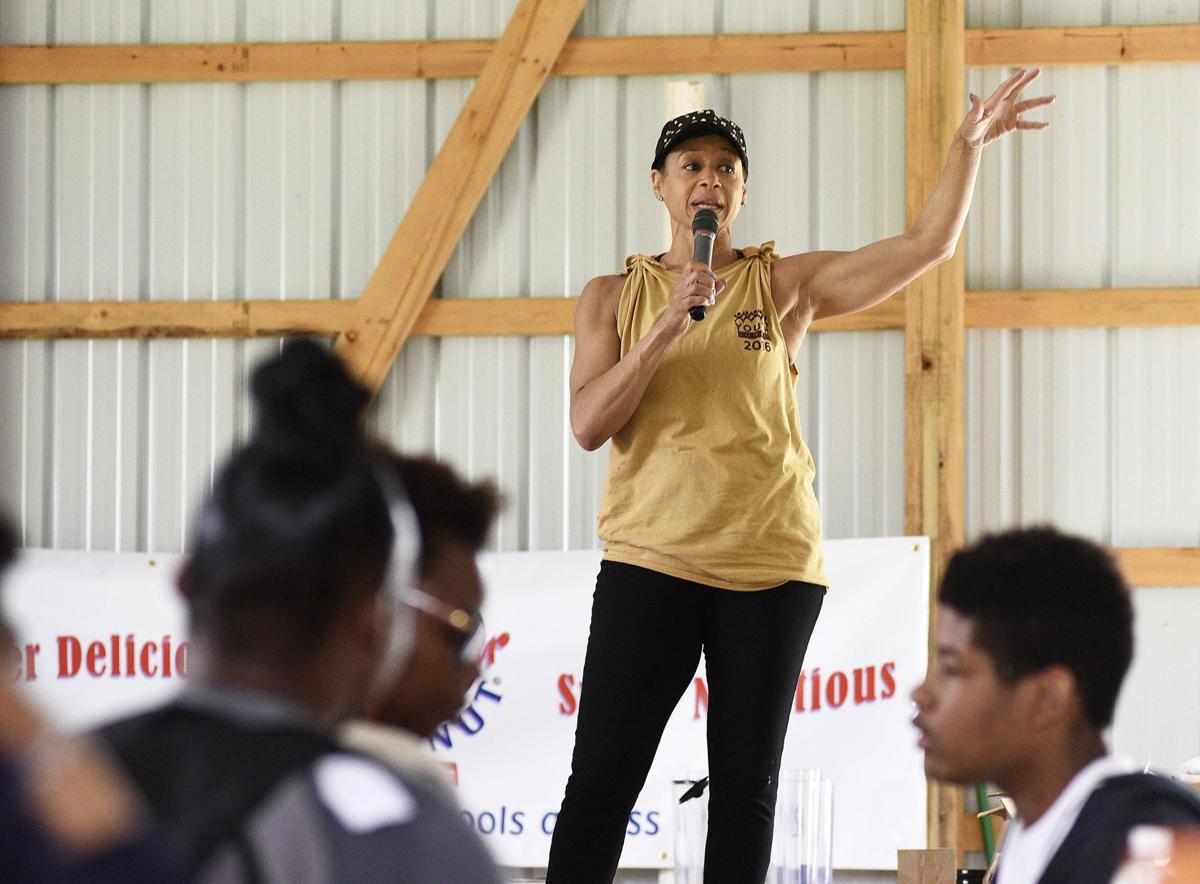 TiAnda Blount talks during the 2016 Youth Summit at the Mel Blount Youth Home. 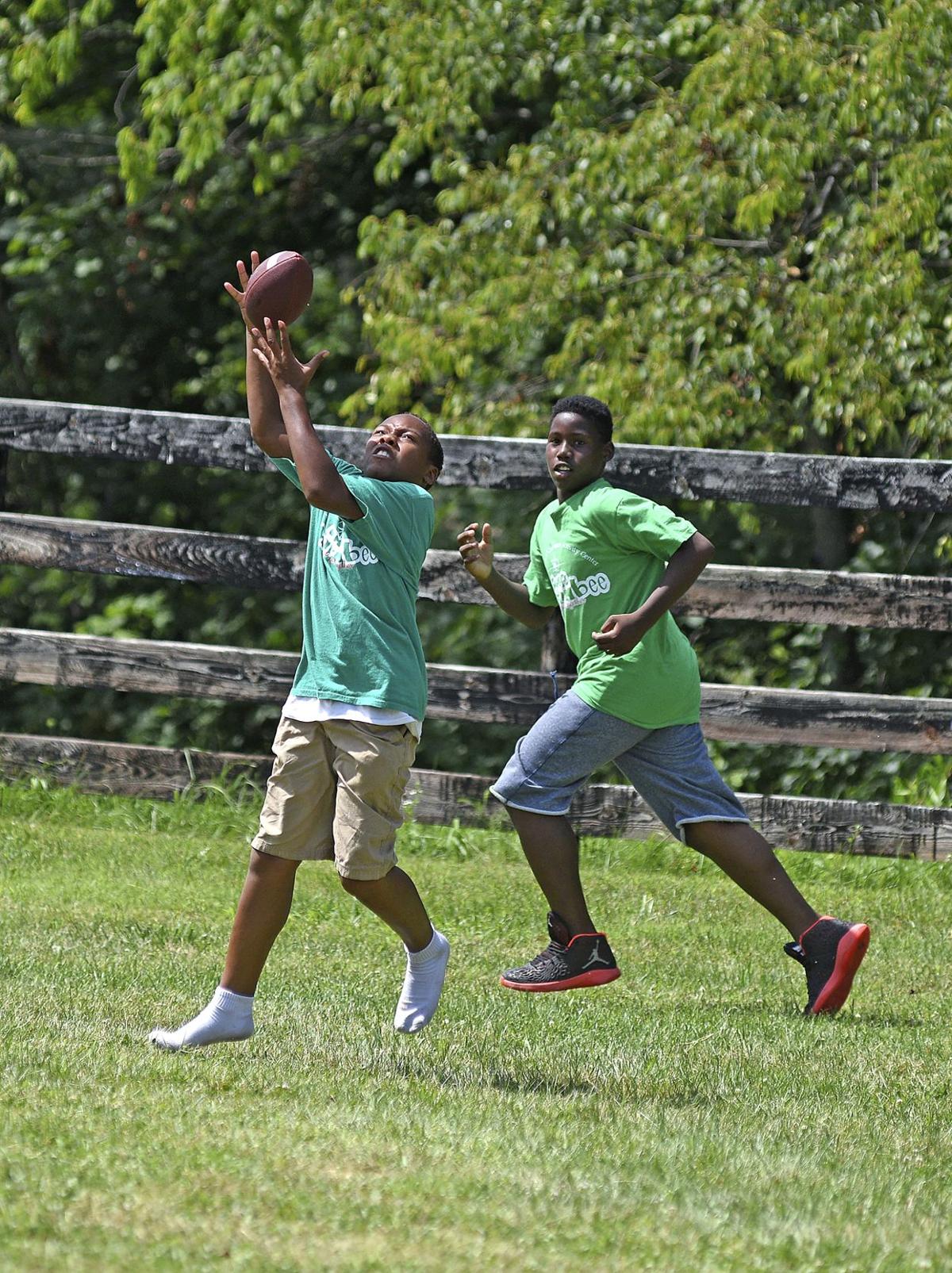 Kids enjoy a game of touch football during the 2016 Youth Summit at the Mel Blount Youth Home. 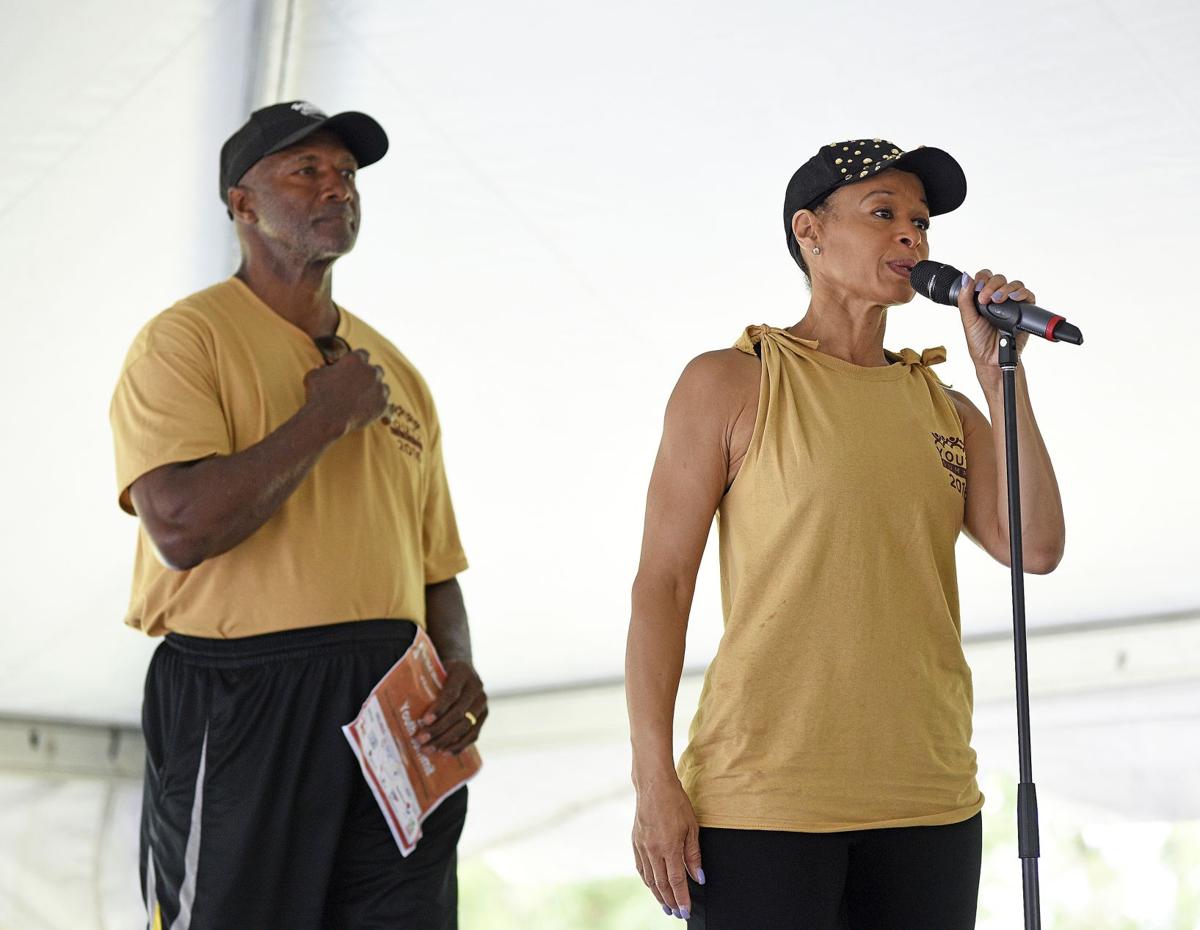 Celeste Van Kirk Mel and TiAnda Blount during the 2016 Youth Summit at the Mel Blount Youth Home in Buffalo Township.

Young adults listen to a speaker during a workshop session at the 2016 Youth Summit at the Mel Blount Youth Home.

TiAnda Blount talks during the 2016 Youth Summit at the Mel Blount Youth Home.

Kids enjoy a game of touch football during the 2016 Youth Summit at the Mel Blount Youth Home.

Celeste Van Kirk Mel and TiAnda Blount during the 2016 Youth Summit at the Mel Blount Youth Home in Buffalo Township.

Brandon Humphrey flashed back a quarter-century, to an African-American kid enticed by the mean streets of a mean Pittsburgh neighborhood.

“I was 13 and had a good mother, but I wanted to run,” he says. “I was gang-banging and got caught with guns.”

A troubled teen without a father, Humphrey was placed by the courts at the Mel Blount Youth Home for nine months in the mid-1990s. It was a stopover he deems beneficial today. “I learned tools to be a man and how to carry myself as a man. I prospered and did well.”

While residing at the Buffalo Township facility, he attended class and played football at McGuffey before moving out and moving to Chicago, where he graduated from high school.

Then came the relapse.

“I didn’t apply what I had learned,” he says. “I started to go on a fast downward spiral.”

One night, he was walking with two men when shots were fired from behind.

“One guy had his brains blown out. The other was shot in the leg,” Humphrey ruefully recounts. “A shooter faced me directly and fired ... and somehow missed. I got away, but I had to tell the families that the two were shot, that one of them was dead. It still didn’t sink in that this wasn’t the life for me. I was still hustling.”

Humphrey did time in prisons in Pittsburgh and Oklahoma, and once out, was in the firing line again. En route to an arranged meeting, he said he was ambushed and shot “multiple times.”

“I was lying in the hospital, in critical condition, when it all came to me. I was thinking how I had lost about 20 close friends and decided, ‘This is over.’”

Over, indeed. Humphrey survived the shooting, climbed out of his self-made morass and became a community leader. He is 37 now, pastor of Union Baptist Church in Monessen, with a voice of experience that is resounding. He is a family leader, too – a father of five who lives in Uniontown with his wife, Nadra.

And a role model.

“We’ve seen the fruits of our labor with this young man,” says Mel Blount, founder and operator of the complex bearing his name.

Since 1989, the Mel Blount Youth Home has operated on 300 rolling, bucolic acres straddling Route 221. The mission, according to its website, “is to help youth develop mentally, physically and morally while teaching them to become productive citizens in society.”

That mission is undertaken in an idyllic setting replete with woods, fields, fishing ponds, walking trails and an outdoor equestrian center. Recreational opportunities abound, but are no more important than the structured mentoring and teaching programs.

Until 2014, the home was a licensed residential facility for adjudicated youths. There are no long-term residents now, following a shift in state policy.

The residences, which can house up to 24, are still used for weekend and week-long programs. Day camps and day programs also are offered, along with large-scale events such as the annual African-American Strategic Partnership Youth Summit, where Humphrey was the keynote speaker last month.

The impact of the Blount home on youths can be determined only over time. Results have been mixed.

“We’ve had success stories like Brandon,” Blount says. “One person is in the military, one is working on a master’s. Others have started a business. On the other end, we’ve had kids we’ve buried.”

Blount is a Pro Football Hall of Famer with four Super Bowl rings, courtesy of 14 years with the Pittsburgh Steelers (1970-83). He was a cornerback who, at 6 feet 3 inches and 205 pounds, towered over and intimidated opposing receivers of that era. At 68, he remains lean and daunting.

Helping disadvantaged youths became his post-retirement focus, largely because he didn’t have an easy upbringing himself. Blount grew up on a farm in Vidalia, Ga., amid meager means, the youngest of 11 children.

“The whole farm was powered by mules and horses, no tractors,” Blount says. “If you work around animals, you learn a lot about responsibility and caring for a different kind of life. We have inner-city kids work around animals. Once they learn to respect an animal, they can appreciate it.”

There are two Mel Blount Youth Homes. The first opened in Vidalia in 1983; the second six years later in western Washington County, where there was some local opposition initially – city kids out here? – but that eventually dissipated.

The complex, like the man, rose from a modest beginning.

“There was nothing here,” says Blount, who lives on the grounds with his wife, TiAnda, executive vice president of the Blount home.

“There was an old farmhouse and a barn and an equipment shed. And a little guest house. There was not one fence post. It was all run down.

At the Youth Summit, Humphrey wasn’t messing around, either. Agencies throughout Western Pennsylvania bring in about 600 teens from disadvantaged backgrounds, accompanied by adults. They sat, mesmerized, as the pastor – well-muscled, full of energy – related his personal horrors in a voice that didn’t require a microphone.

“I tell kids a little about my story,” he says. “Maybe it mirrors some of their lives.”

Humphrey preached love along with Brittany Powell, a young adult who also spoke at the summit. She was a troubled teen who is now pursuing a law degree.

“I was aggressive, angry, had a horrible mouth,” she says. “I was in a lot of group homes. I realized that really bad things catch up to you. I want you to remember God is there. Live your dreams, be what you want to be. You can be successful. Young men, respect women. Women, respect yourselves.”

The Youth Summit also featured workshop sessions on health and relationships and recreational activities. It was one of three big group events in two months. Steelers rookies came out in May for a day of activities, as did freshmen football players from the University of Pittsburgh in late July.

“We all invest in things,” Blount says, “but the best resource is our young people. Invest your knowledge and plant seeds. That’s the investment.”