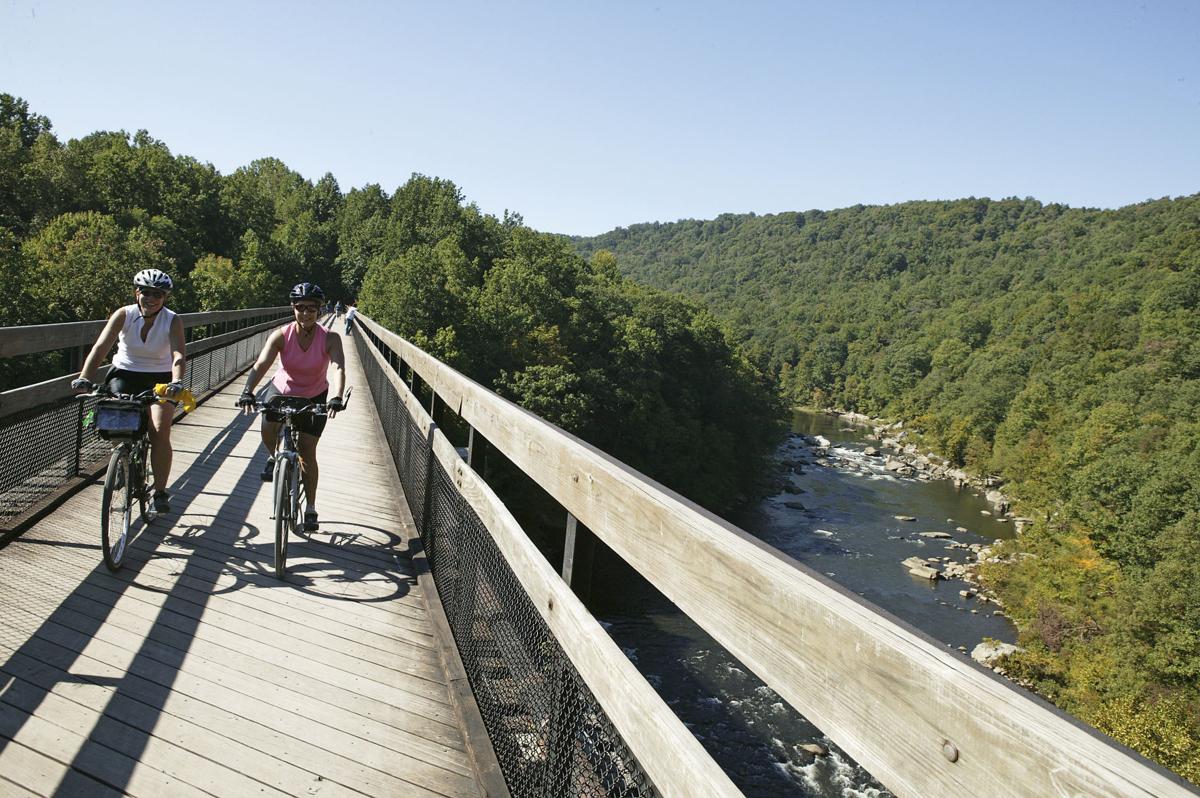 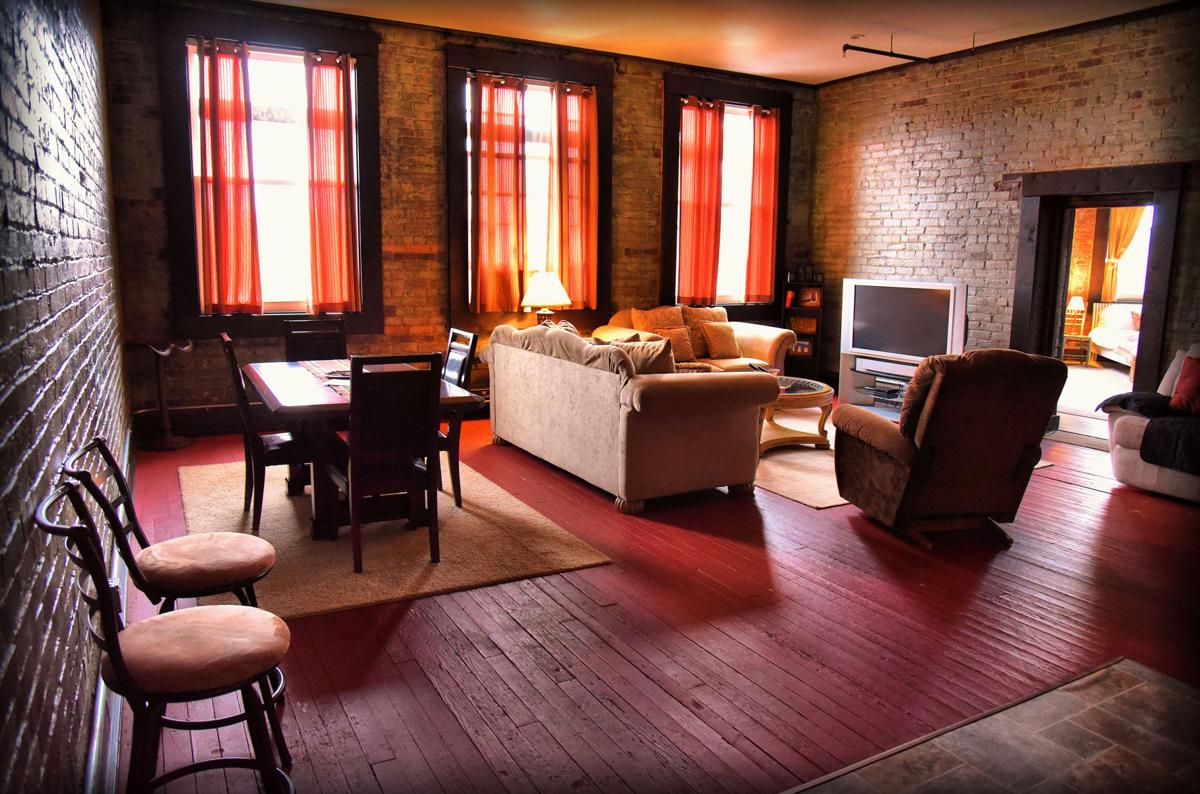 A view of the two-bedroom Hoover Suite in the Morgan Toole Company’s boutique hotel. 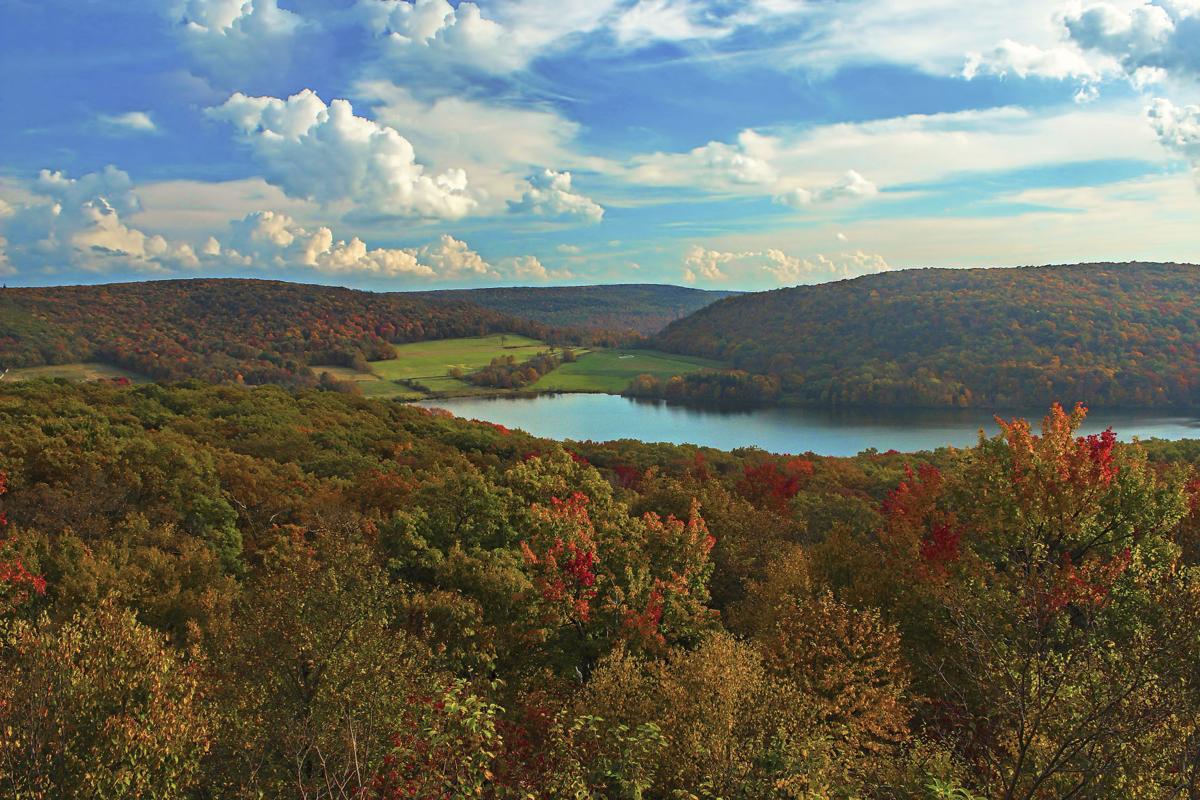 A view of Forbes State Forest near Mt. Davis, which is the highest point in Pennsylvania. 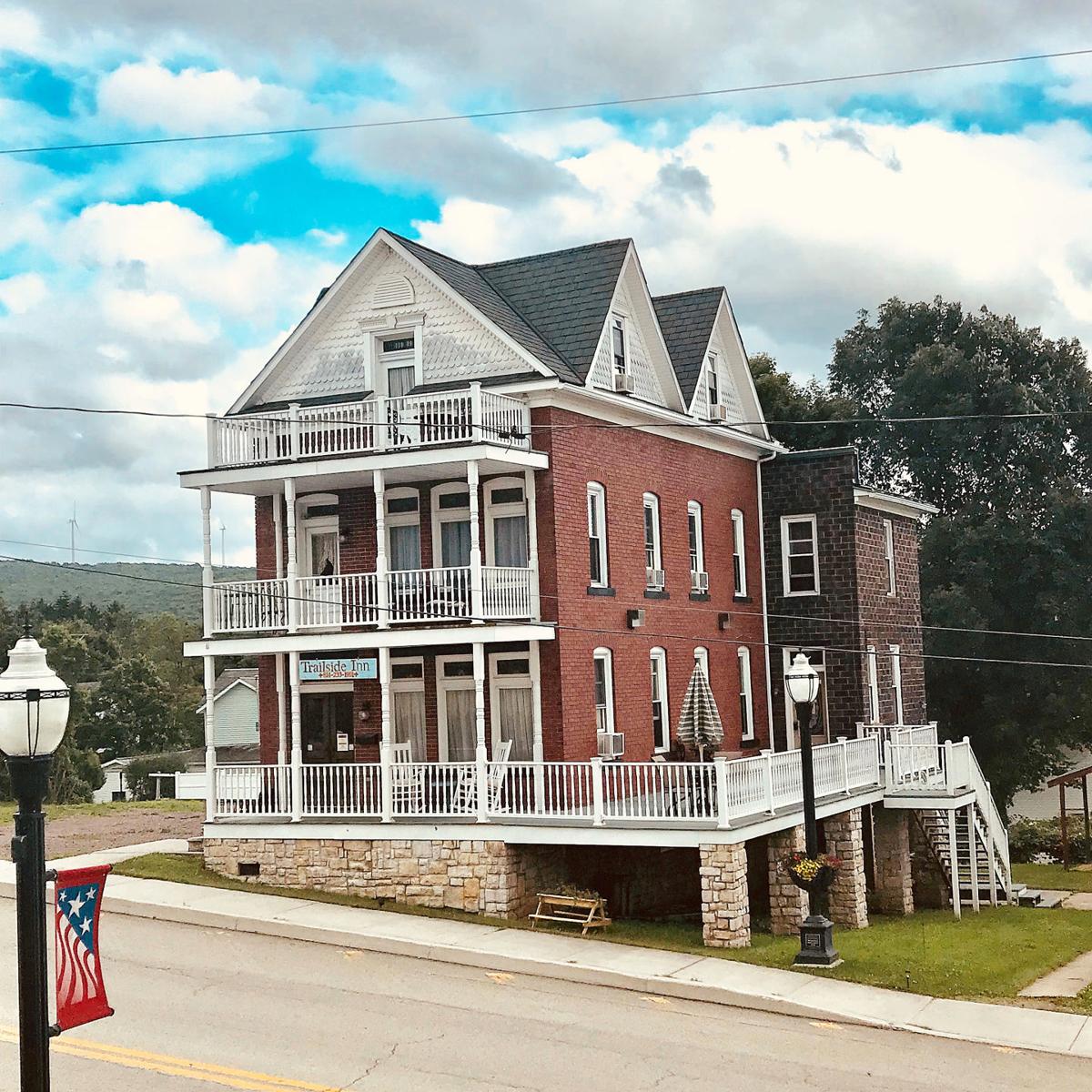 An exterior view of the Trailside Inn, a beautifully restored 1925 home converted to an inn that sits right across the street from the Meyersdale Trailhead.

Combine history with some intrigue and breathtaking mountain scenery, and you have not just a stop along the Great Allegheny Passage bike trail, but a captivating destination that offers lodging, entertainment and dining in Meyersdale, Pa.

Jeremy Hoover and his wife Andrea, both natives of Meyersdale, have spent the last eight years creating a haven for not only the GAP travelers, but the local community of Meyersdale and beyond.

Called Morguen Toole Company, the establishment has an interesting name and tale. In 2010, the couple purchased two adjacent buildings, literally up against each other, that once operated as a morgue and a hardware store, and carefully renovated them into one complex offering overnight accommodations, entertainment and restaurants. During the renovation, doorways and openings were made in the common wall to achieve one large complex. In 2013, a fire that started in a condemned building next door forced Morguen Toole to close for two weeks while repairs were made, Jeremy says.

The building was originally constructed in 1873, eight years after the assassination of President Lincoln and the end of the Civil War. The couple recognized the historical significance. “The people who would have shopped there actually could have fought in the Civil War,” Jeremy says.

“The mortuary and furniture store was one side, R. Reich and Sons Furniture and Mortuary. Furniture makers in late 1800s, early 1900s built caskets and that was their recession-proof business. The other side of building housed Baer & Son Hardware. So the name Morguen Toole comes from the original ownership: ‘morgue,’ for the R. Reich side and ‘tool’ from the hardware side. This is a strong German area and we wanted the spelling of the name to reflect that,” he explains.

Meyersdale’s coal mines made the area a player in the Industrial Revolution and the titans of the time, like J.P. Morgan and Andrew Carnegie, came through Meyersdale, Jeremy says. To pay homage to this era, anything removed from the building during renovation was saved and re-purposed to keep that history inside the building.

Just as the vacant rails along the GAP have been re-purposed to bike trails, the Hoovers have given new life to the Morgue Toole building. Located on Center Street, there are 12 rooms for lodging. The third floor is a full hotel with a variety of room styles. They offer high-end suites for guests who want luxury amenities, hostel-style lodging for cyclists desiring just a ‘cot and a hot’ and rooms with standard hotel amenities.

One guest may be permanent, but not visible – that’s where the intrigue comes in. During renovation, the Hoovers and their crew say they experienced some “occurrences” that they couldn’t explain. “We’d work pretty late into the night, sometimes 3 and 4 in the morning. We had limited electricity and would have to run to a bathroom (the only one operating) in the middle of nowhere. It was dark and kind of creepy. It always felt there was a little old lady hanging out there, never threatening, just hanging out there, and we started calling her Helen,” Jeremy says. “After that it seemed she was having fun with us. We’d come in the morning and find light bulbs scattered all over the floor or things would go missing up and turn up in odd spots.”

Lights in certain rooms would turn off unexpectedly. “It’s never been anything threatening – just banter with something we can’t see.” Several ghost hunting groups have been through the building and found their own unique things on audio or video.

The second floor has a restaurant and pub and offers a large outdoor covered balcony seating 125. By the end of this summer, the ground level will have a patio space with an outdoor bar.

Jeremy says that when they first bought the building, their intention was to open an event/catering business, but on further investigation of the bike trail and the needs of the travelers, their vision shifted. They found people had three main desires: dining, lodging and entertainment.

For additional trail traffic, the couple purchased and renovated a secondary location just steps off of the GAP trail called The Trailside Inn, a 1925 brick home that offers five rooms. The entire business has grown and flourished over the last eight years and Jeremy believes there is potential for future investors interested in what he is trying to achieve.

The facilities operate full-time nine months of the year. During the three winter months, they operate on a limited schedule, open Wednesdays and Saturdays. He hopes for increased growth as more people become familiar with the town.

The trail brings new people. Once traveled by mighty locomotives, The Great Allegheny Passage (GAP) bike trial winds along a 150-mile path that carried coal mined from towns that flourished during the Industrial Revolution. Now this leisurely bike ride through Pennsylvania and Maryland brings the opportunity for tourists on two wheels to explore nature and the history of a time gone by.

“From a geography standpoint, you can stay in Meyersdale and you get some of the finest scenery, outstanding features on the trail, and you have the history of the town. In my opinion, it’s one of the best spots on the trail,” Jeremy says.

The Hoovers created “stay and play” packages that offer easy, downhill bike rides to Cumberland, Md., through the Big Savage Tunnel and across the Eastern Continental Divide and in the opposite direction, also downhill, to Ohiopyle, which crosses over the Casselman River via the Salisbury Viaducts. A shuttle is available for the return trip.

“It makes for two very nice days of riding. And we sit in between some of the best visual pieces on the trail.”