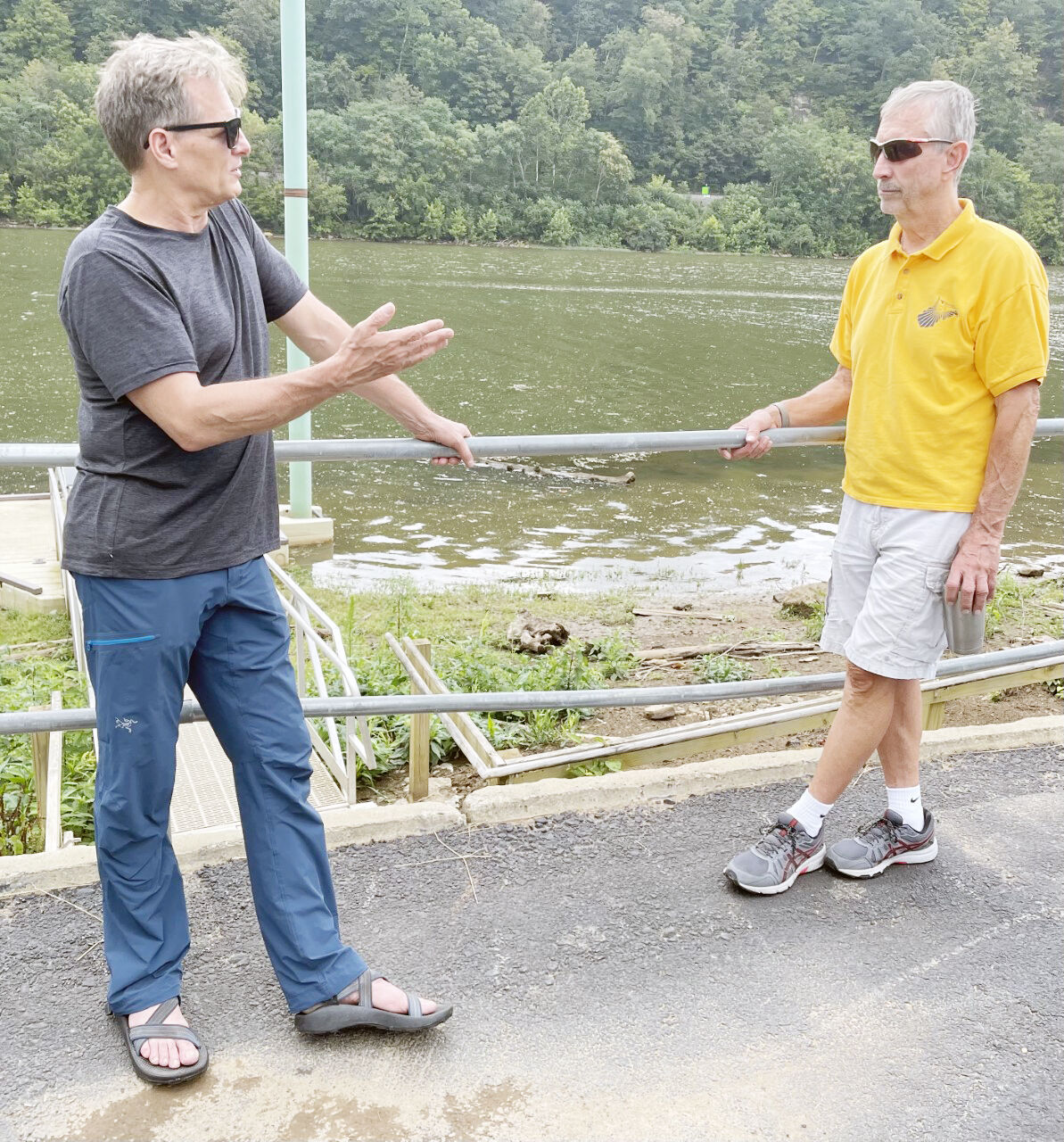 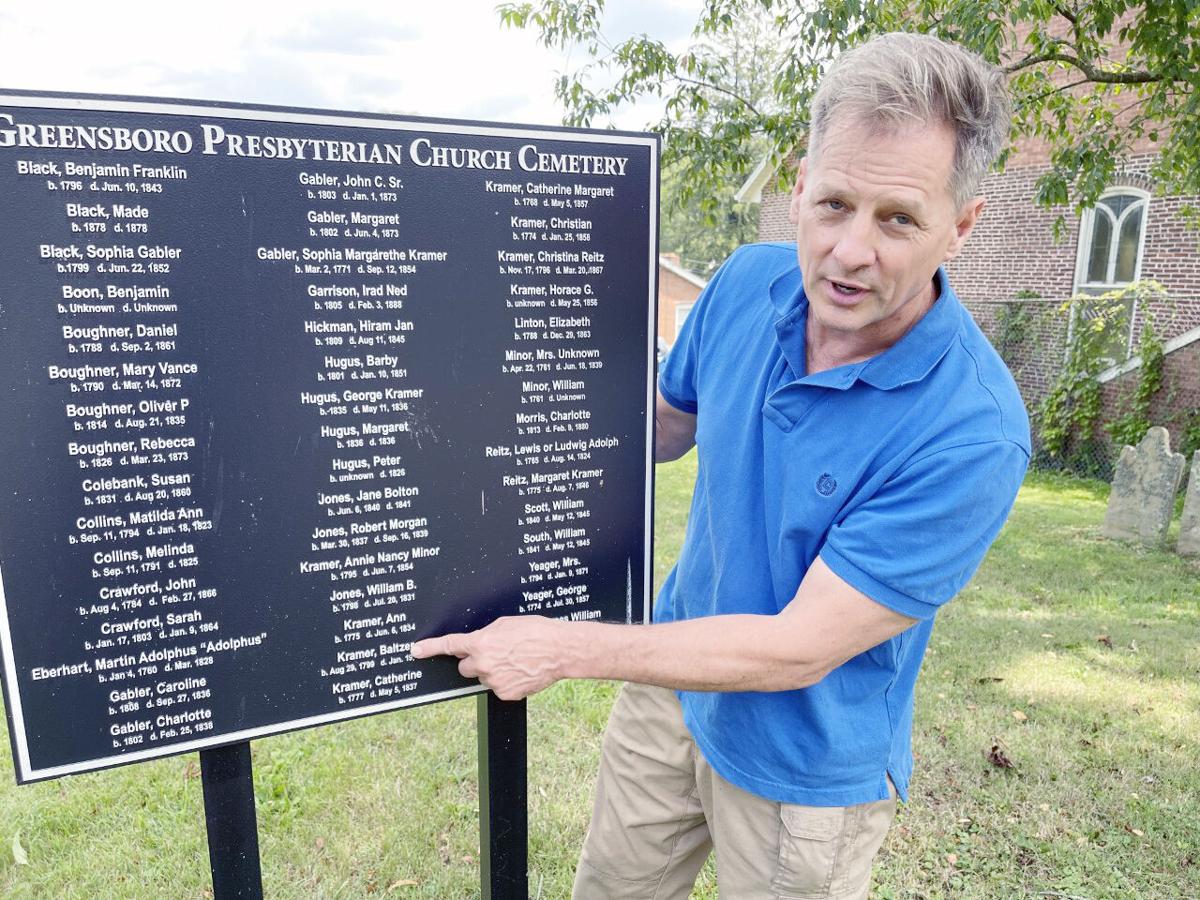 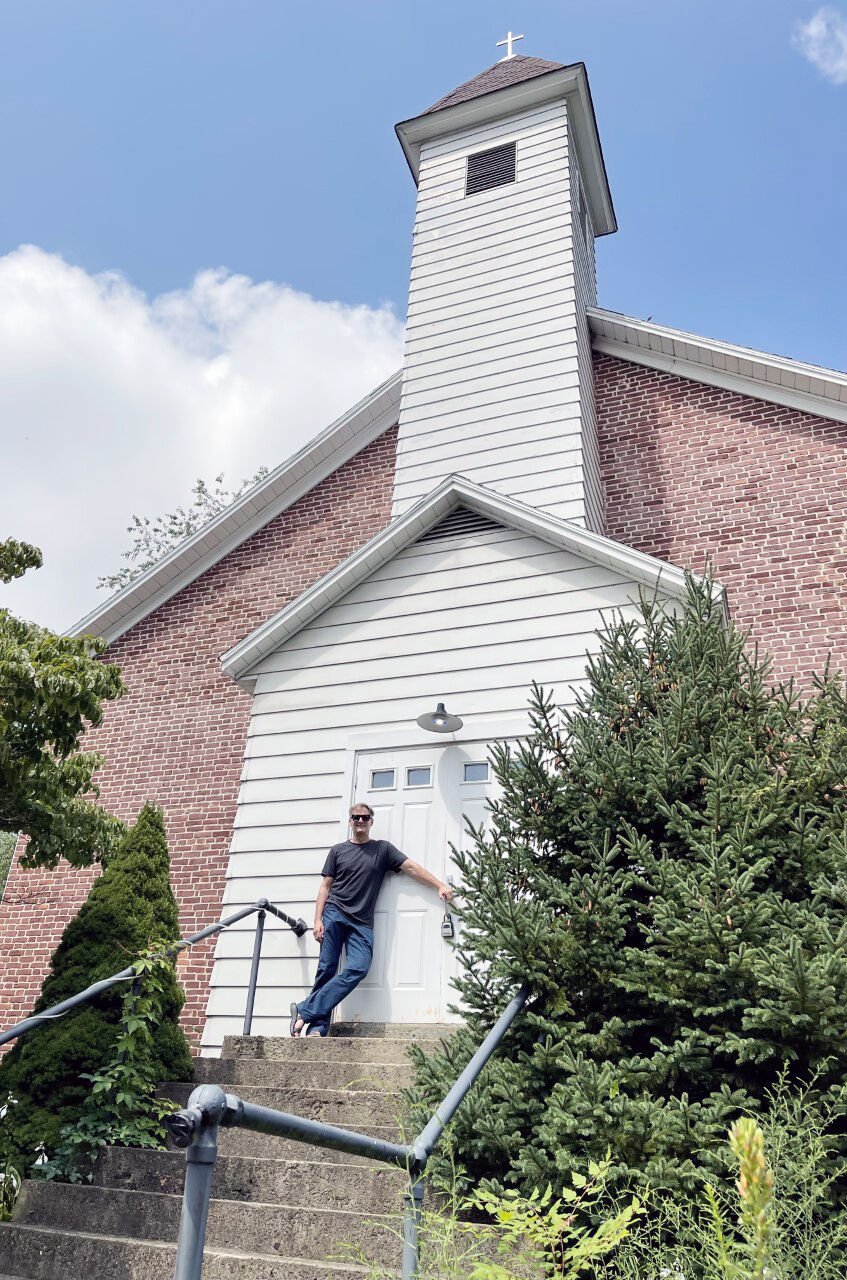 Jeff Hawk is the proud new owner of the old Prebyterian Church in Greensboro. 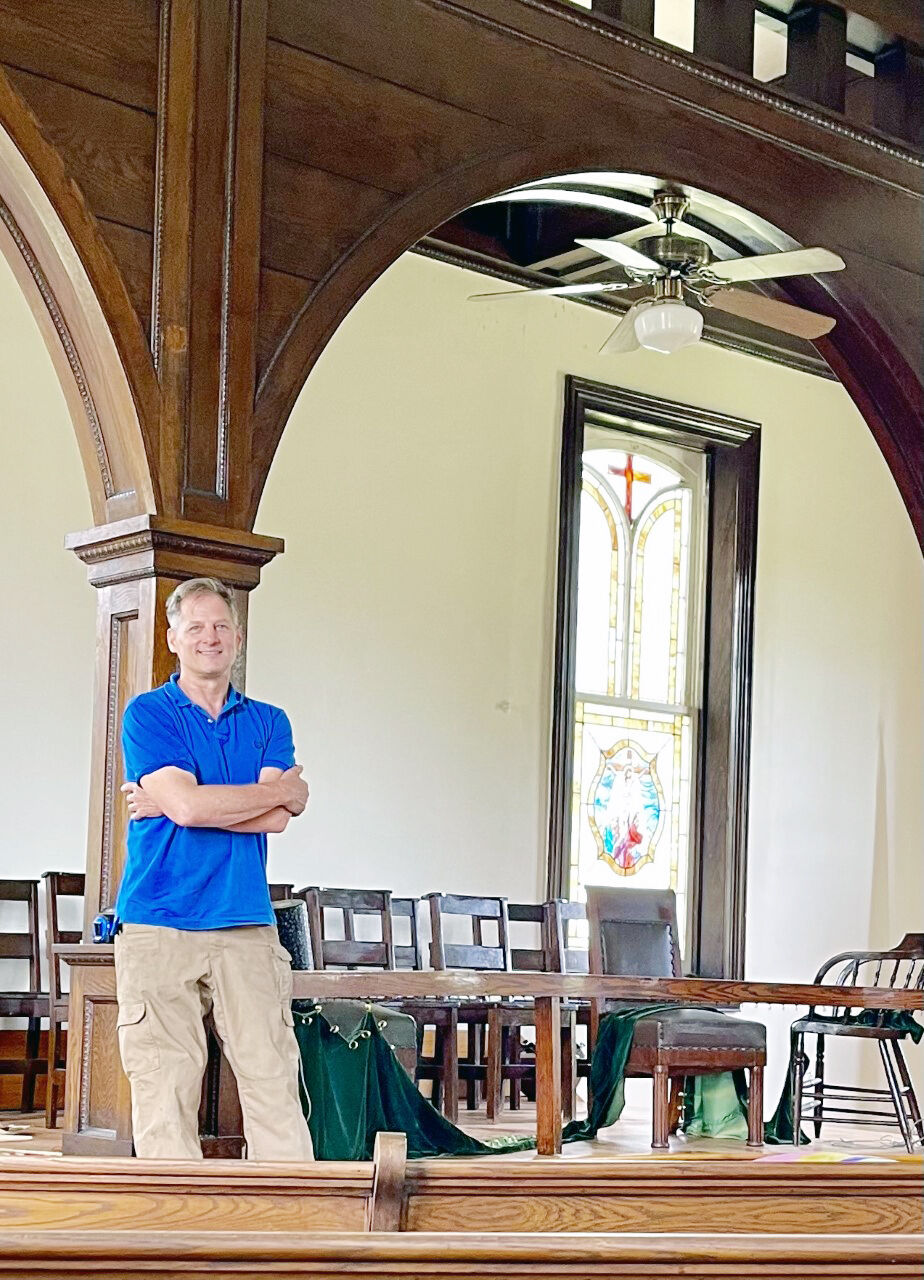 Jeff Hawk stands inside the church he now owns in Greensboro. 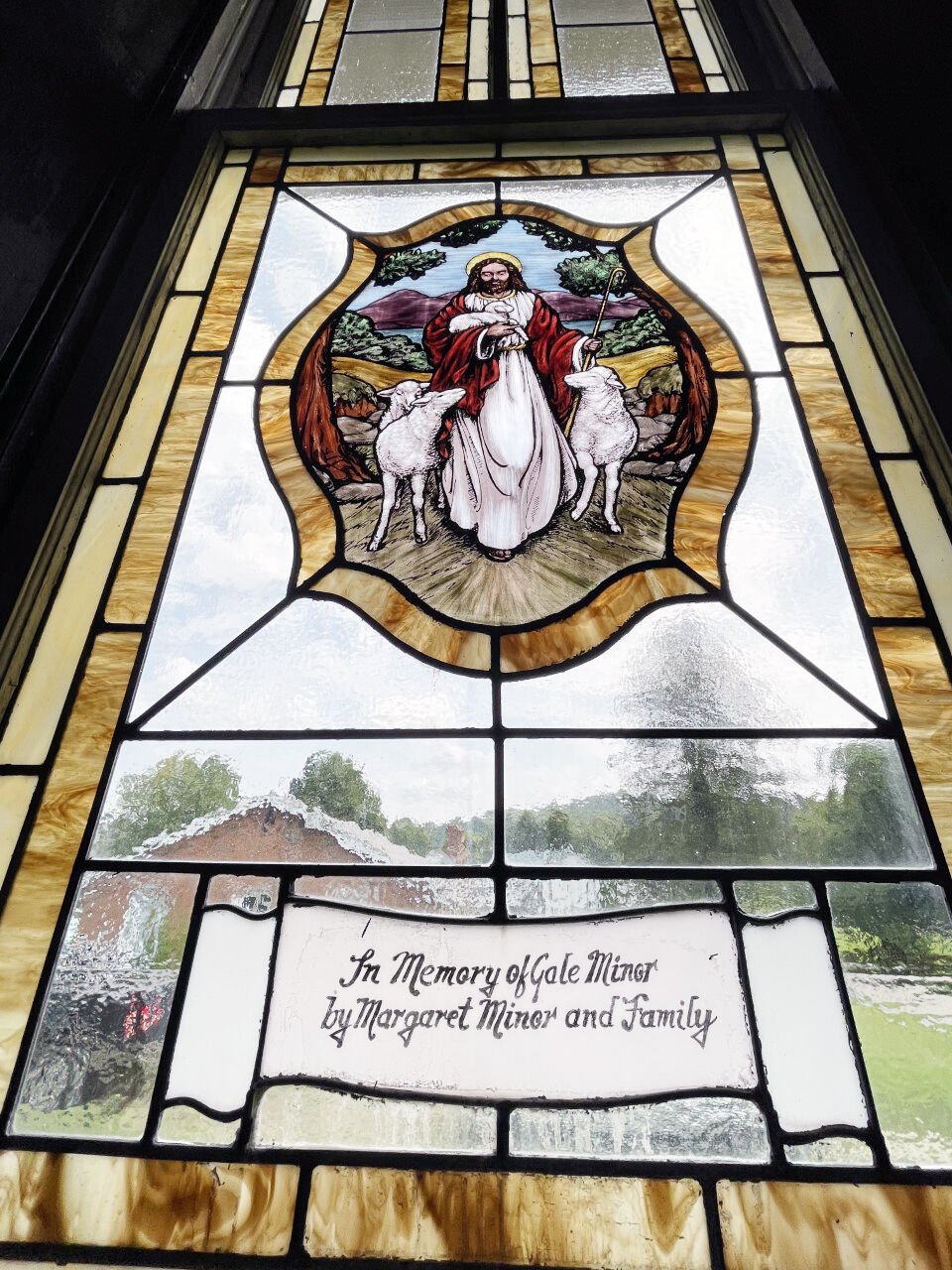 A stained glass window at Jeff Hawk’s church in Greensboro.

Jeff Hawk is the proud new owner of the old Prebyterian Church in Greensboro.

Jeff Hawk stands inside the church he now owns in Greensboro.

A stained glass window at Jeff Hawk’s church in Greensboro.

The first hint that Jeff Hawk – proud new owner of the old Presbyterian Church in Greensboro – expects the unexpected is the sandbag in the doorway of the church basement.

This recently retired Federal Emergency Management Agency official, former U.S. Marine combat correspondent and public relations officer has had his share of the unexpected since arriving in Greensboro to get things up and running at the church. Things like the water pipe that just burst a seam that no number of sandbags will fix.

His face seemed to be all one big grin.

“No damage done but now I’m all wet,” he said. “Come in, we can start in the basement and work our way upstairs. I’m working on the bathroom and the plumber will be back in an hour.”

The kayaks stacked against a basement wall let you know that Hawk really doesn’t mind getting wet.

While on assignment with FEMA in California, Hawk spotted the church listed for sale online.

“I tracked it for a year and the price kept going down,” he said.

When he placed a bid for $26,000 in 2019, it was accepted. When church trustees contacted him and asked if he might give just a little more, Hawk said he was happy to add $2,000 to the deal for the church of his dreams.

“I loved it sight unseen,” he said.

“Ask and you shall receive” has been part of the spirit of the oldest meetinghouse in Greensboro since the beginning.

When Europeans first came to this fertile stretch of the Monongahela River, indigenous hunters had already named it Delight. The mostly Scott Irish newcomers shared what they brought with them and worked together to build a community that would, in time, become a thriving river town famous for its stoneware pottery.

The German glassblowers who arrived in the late 1700s added their brickmaking and bricklaying skills to the collective mix. Their craftsmanship can be seen in the meetinghouse walls they built in 1823 to give Cumberland Presbyterians and Lutherans a place to gather. Church history notes that original settler Col. John Minor’s daughter Minerva Minor Crawford “housed the bricklayers as her donation to the church.”

The cemetery Hawk inherited is in the backyard. A plaque lists the names of those German craftsmen, along with others with old family names buried there, including at least one Revolutionary War veteran. On the back wall of the church, sections where the original bricks were replaced after the roof fire of 1836 can be seen. The half-mowed lawn, hemmed with wildflowers along the sidewalk that Hawk allowed to grow have attracted Monarch and swallowtail butterflies.

Hawk hunkered down to take a snapshot of a Monarch with his smartphone. This week’s yard work was almost done, and by late afternoon he would be heading back to Somerset where he camps out while refurbishing the log cabin that came with the 48 acres he owns, along with the church. He also spends time in Pittsburgh working on the house he purchased when he first moved to the area.

Hawk made a triangle with paper clips, cupped his fingers around them and beamed. “This my triangle of love – Somerset, Pittsburgh, Greensboro. I’m an idea guy and I’m respectful of the ideas of others. I’m hoping what I do generates enough money to improve and move my projects forward.”

The Somerset property is ten minutes from the Flight 93 National Memorial. Hawk knows the need for extra parking, along with RV hookups and lodging for Friends of Flight 93 and Wounded Warriors who come to memorial events.

Here at the old meetinghouse in Greensboro, where the kayaks in the basement wait for him to take another paddle, Hawk admits he feels the call to do his part to help the community grow.

“I want to fit in and make it better, optimize what’s already here. Greensboro is a great destination. I find this place quaint, beautiful and intriguing. I bought the church without really knowing what I would do with it. Now that I’m here I can see it becoming a venue for music, a place to hold wedding parties, weekly rentals, maybe a bed and breakfast. I’d welcome community input. I’ll have plenty of time to decide while I’m working on it – that’s what I’m focused on now.”

Hawk was delighted to meet up with beavers on his first paddle to Grays Landing, and he made a video to post online. But his training for disasters includes river safety and the rash of deaths this year from rafters and boaters plunging over dams was on his mind when he came to the dam and saw its potential for disaster.

“I’m planning to lead a river safety kayak trip in early October and I already have people interested,” he said. “I’m working on getting the word out.”

Hawk would meet retired Cornerstone Clinic CEO and avid biker and paddler Bob MtJoy a few weeks later at Potters Landing, the launch in Greensboro that MtJoy and other volunteers helped restore after a spring flood and refurbished to be handicap accessible in 2020. Both agree Greensboro is a place for those who love being out and about in the great outdoors. What better way to spend the day – or the weekend – than paddling the river, hiking and biking local trails or roller skating, swimming and sleeping over in lovely, historic Greensboro?

Upstairs, light from the stained glass windows spilled over the rows of pews from the renovation of 1912.

Still damp from his baptism in the basement, Hawk relaxed on a pew and reflected on his life, from growing up in Tiffin, Ohio and graduating from Ohio University with a degree in communications to working in Los Angeles when the Rodney King riots burned through his neighborhood, Little Korea. Hawk flashed a Marine’s grin. “That was the worst combat zone I was ever in.”

While staying with his brother in Colorado in the aftermath of the riots, Hawk, at age 28, was looking for a change of pace when he ran into a Marine recruiter at the mall. “I told him all I was looking for was a bed, some food and something to write about and he said sign here.”

Hawk traded his corporate public relations title for combat correspondent and found his beat on the front lines coordinating media matters and more as a Marine. He discovered his love of paddling while on assignment in Bosnia in 1996 and having the chance to raft the south to north-flowing Tara River in Montenegro to where it joins with the Priva to form the Drina River in the Alpine reaches of the Balkans.

After mustering out, Hawk went to work with the Corps of Engineers. When assigned to the Pittsburgh district, he found an affinity for the lay of the land here, with its many streams and rivers just waiting to be paddled. After finishing up 20 years of federal service working with FEMA, Hawk is happy to be a free agent, dealing with all the unexpected moments his new life has to offer.

Like the first night he slept at the church. Too tired to make the drive back to Somerset, he camped out on the pulpit, with chair cushions and the comforter and pillows he had in the car.

“About midnight I heard someone banging on the door and when I opened it I saw this tall bearded guy standing there with two beers. He asked me if I wanted one. I said no as politely as I could and shut the door. When I opened it again he was gone. Never saw him again.” Another grin. “I guess that was the Greensboro welcoming committee.”