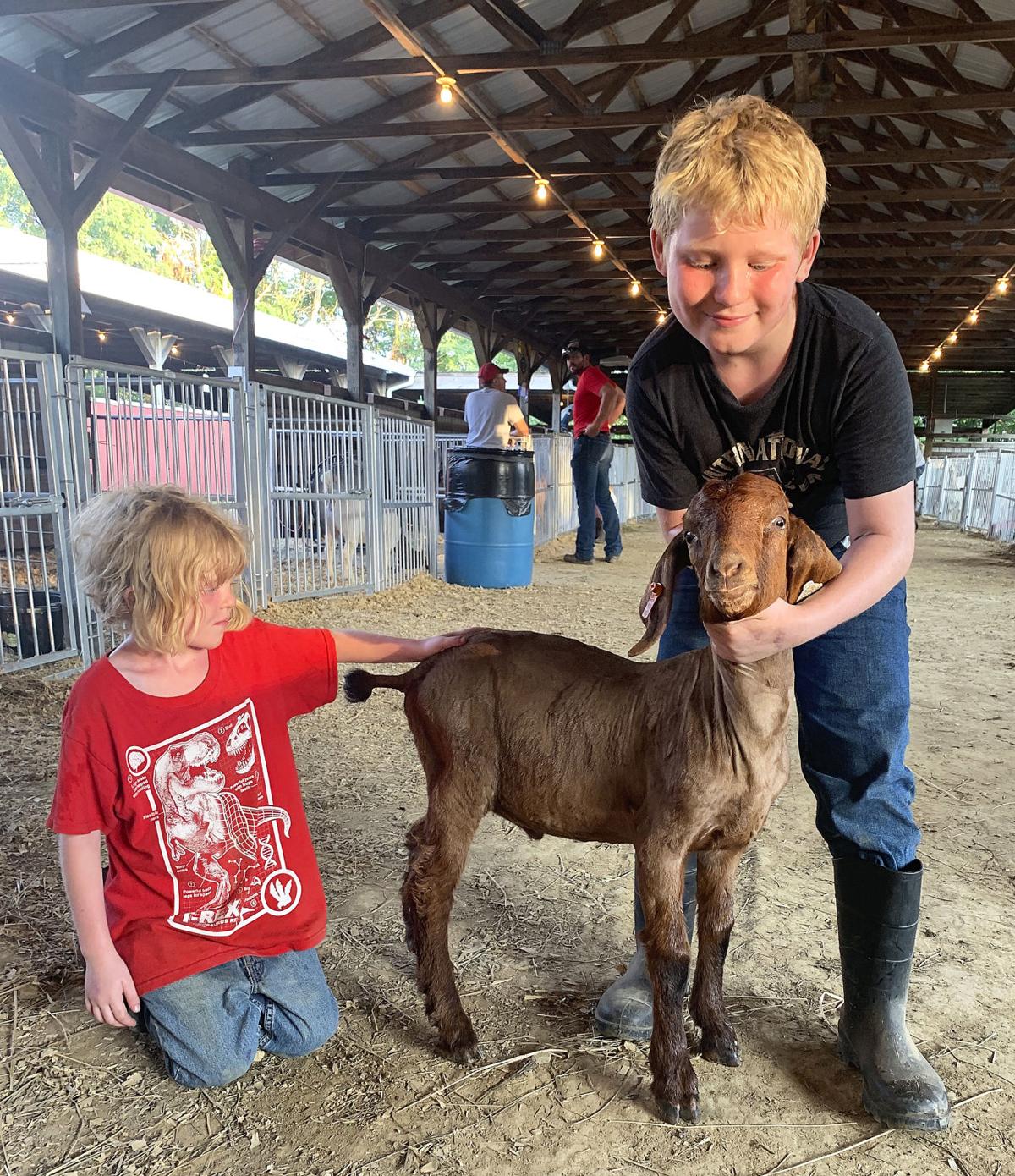 Siblings Avery and Neil Pettit at the Jacktown Fair this summer with Neil’s market goat. 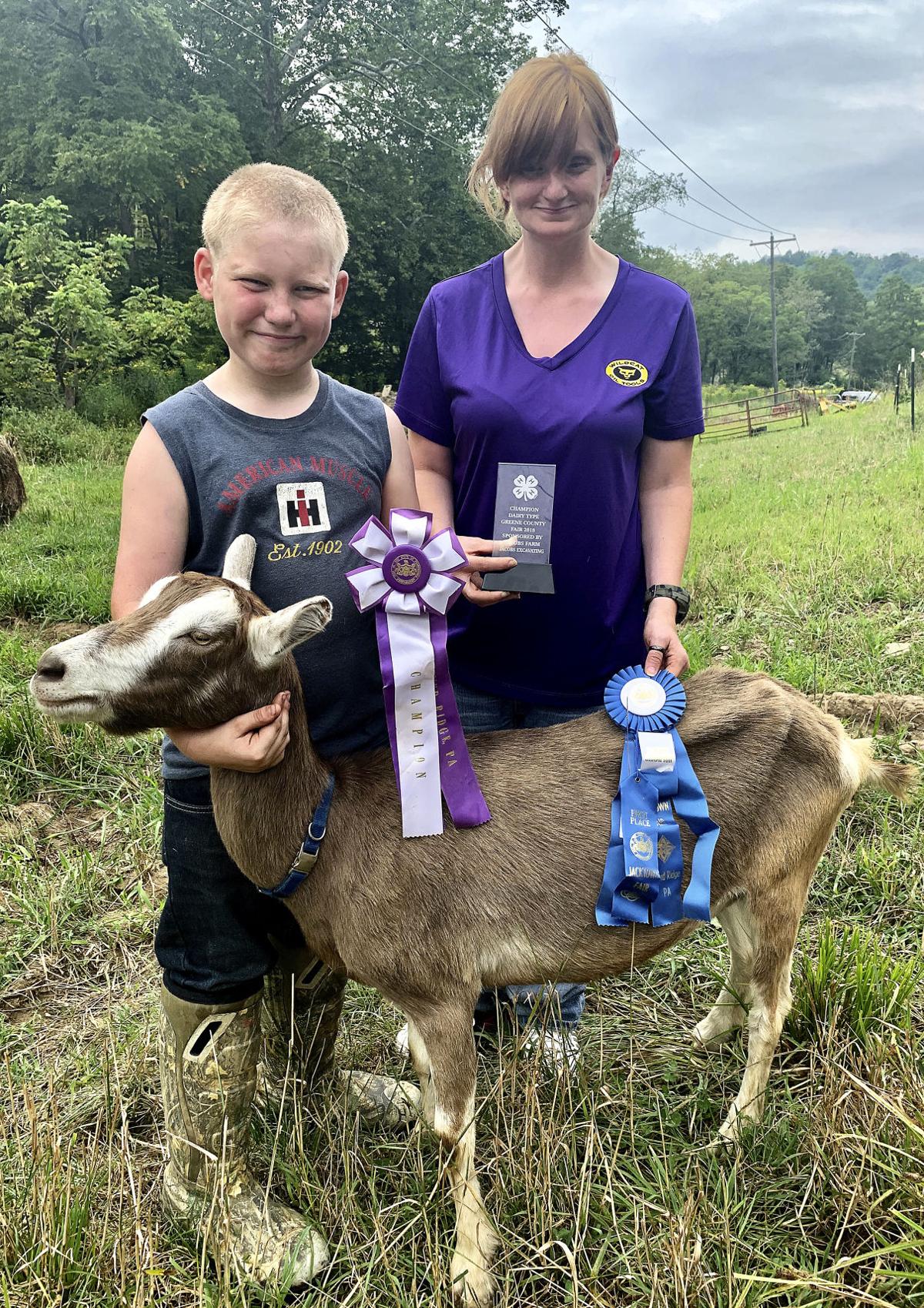 Neil Pettit and his mom Stacy with Deep Well Blue Bell, Grand Champion of the 2018 Jacktown and the Greene County fairs, at their farm, Country Rose Dairy. 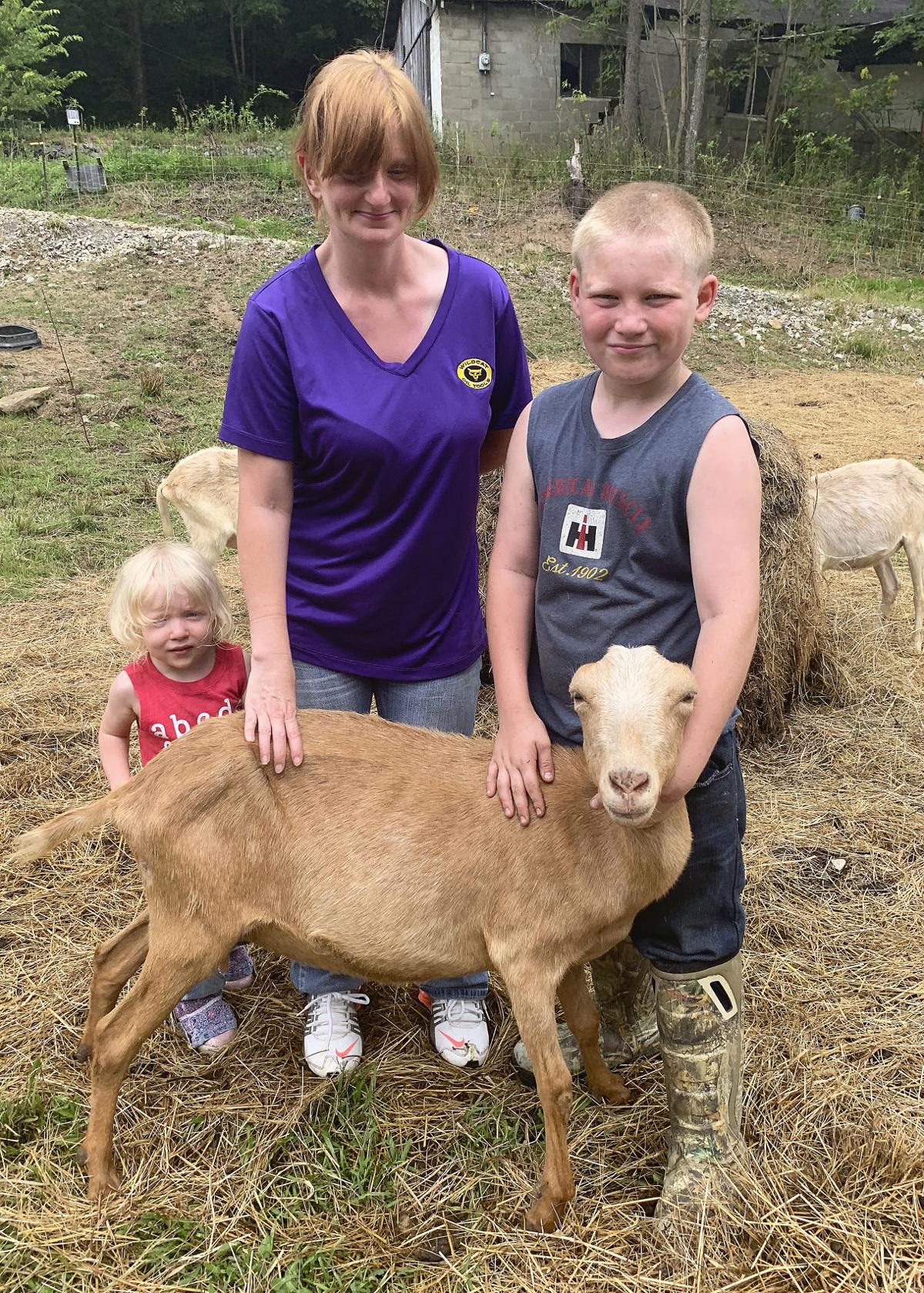 Casey, Stacy and Neil Pettit are all smiles with Frosty Autumn Star at Country Rose Dairy. She produced nearly a gallon of milk a day when she was fresh.

Siblings Avery and Neil Pettit at the Jacktown Fair this summer with Neil’s market goat.

Neil Pettit and his mom Stacy with Deep Well Blue Bell, Grand Champion of the 2018 Jacktown and the Greene County fairs, at their farm, Country Rose Dairy.

Casey, Stacy and Neil Pettit are all smiles with Frosty Autumn Star at Country Rose Dairy. She produced nearly a gallon of milk a day when she was fresh.

Text and photos by C.R. Nelson

Neil Pettit is ready to go into business – the dairy goat business – and he’d like the world to know. He told me so in a message I received from his mom Stacy’s Facebook account as spring drizzled into summer and the fair season got ready to roll.

“… my name is Neil J. Pettit I’m a third generation 4her and was wondering if you would do a news paper story on my dairy goat farm… i am nine years old i own 23 head of dairy goats with 13 milking at this time….i am the only Dairy goat farm on this side of Greene County….”

Dairy farming was once a good source of income in Greene County and neighbors could make a living driving the trucks that did daily pickups at the many small family dairies scattered on the back roads of this end of the county.

Once the Chess family sold milk on Bristoria Road and once Neil’s great-great uncles Bill, James and Richard were in the business as well. But by the 1980s the market had been swallowed up by corporate interests and falling milk prices. Farmers switched to beef cattle and trucks no longer ran from farm to farm taking the milk and cream to be processed by companies like Sealtest in Pittsburgh.

“My brother James was the last one out here,” Bill Pettit tells me. “When the coal company bought my farm on Hoges Road in 2006, I was ready to get out.”

Back on Bristoria Road, the Chess dairy is no more, but Neil and his family are getting ready for the new market in milk – goats milk made into cheeses, ice cream, yogurt and fudge. Or how about goats milk soap? Not a bad dream for a nine-year-old 4-Her who already has ribbons to show for the herd he is building, ribbons won last year when he first showed his dairy goats and decided to go into business.

I caught up with the Pettits at the Jacktown Fair in July, hanging out in the stock barns with their animals and neighbors, waiting to go into the show ring, keeping cool with huge barn fans, eating fair food on folding chairs. No, Neil wasn’t showing his dairy goats this year – the family is in the process of setting up their new farm on Bristoria Road, and there hasn’t been time to get Neil’s milking does properly squared up for the show ring. But Neil was there with his market goat and sister Avery, age seven, was tagging along for the fun of learning from big brother. For country kids, a week in the barns with other families is the best kind of summer camp.

I promise to get back to them when they get more settled in, glad to learn they will soon be my neighbors and yes, I do like goat’s milk fudge!

Stacy is gathering recipes for the soap she’s getting ready to make – yes, lavender soap is awesome! Very soothing. I’ll lend you my books – and we text back and forth as the family builds their new future near the old village of Bristoria. The road hugs the hill there, and their acreage sits below, along the creek that flows into Ryerson Station State Park.

Things are coming together, there’s fresh gravel on the driveway and the broad, rich bottomland is lush and green. Neil’s goats, along with some Jersey heifers have a fenced-in section of field to hang out in for now – Stacy tells me that old overgrown farmland must be checked carefully for native plants that can poison animals – hemlock, snakeroot, things like that. “Especially along the creek,” she says, gesturing to the undergrowth that hides the water from view. This piece of land once belonged to husband Larry’s grandpa Charlie Brown. Now it will be known as Country Rose Dairy, and she has a Facebook page already set up.

Neil’s fraternal twin brother Noah picks a petunia from a hanging basket, tucks it into my hatband and off we go to visit the herd.

The Jersey heifers, Roxy, Wendy and Tinker Bell, will be fresh someday so it looks like Neil’s business will include the rich milk that Holsteins can’t produce. His goats are a colorful bunch – ghostly Saanans, party striped American Alpines, an elegant Toggenburg named Deep Well Blue Bell and 15 mostly gopher-eared LaManchas from a breeder in New Waterford, Ohio. They are patient and friendly, willing to be pulled from their hay munching and nudged into something of a show ring stance for photo ops. Neil’s ribbons drape nicely over Deep Well Blue Bell, Grand Champion of the 2018 Jacktown and Greene County fairs.

Dairy goats are judged by the uniformity of their udders and the general body structure and disposition of their breed. The goats of Country Rose Dairy will be bred this fall for a crop of spring kids and milk, milk and more milk. Goats get milked twice a day and last year, Frosty Autumn Star, whose LaMancha grandma was a national champion, produced nearly a gallon of milk a day when she was fresh. The family bought about two tons of special mix feed last year, and this year they’ll be buying more as Neil’s herd grows. “They don’t like pellet feed,” Stacy says, but love cracked corn, alfalfa, sunflower seeds and raisins, with dried cranberries and the occasional orange as a treat, which explains the cluster of empty lunch-box-size raisin boxes by the fence. No wonder these does love their humans!

When the birthing and milking barn gets built it will have baby-monitoring cameras and milk tanks, and when all the USDA specifications for a commercial kitchen are met, Larry will be making mozzarella cheese and Neil will be learning by watching how to make fudge. With or without nuts. Oh my yes! This new generation of “back to the landers” has its finger on the pulse of what the market is ready for. I’m putting in my order now!