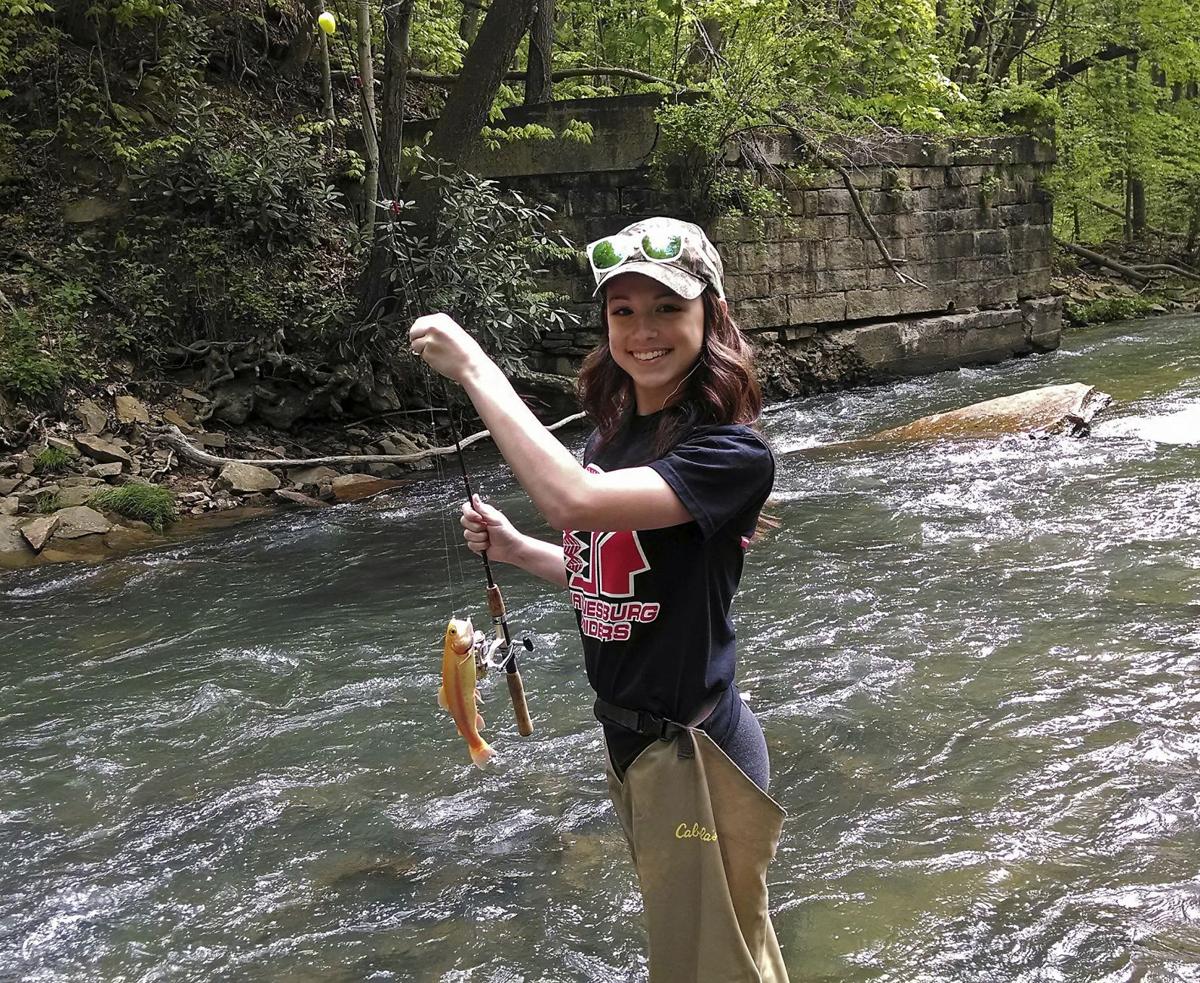 Kaylin Tretenik, a former student at Margaret Bell Miller Middle School in Waynesburg, catches a fish in Meadow Run Creek in 2012, when she was a member of the school’s fishing club. 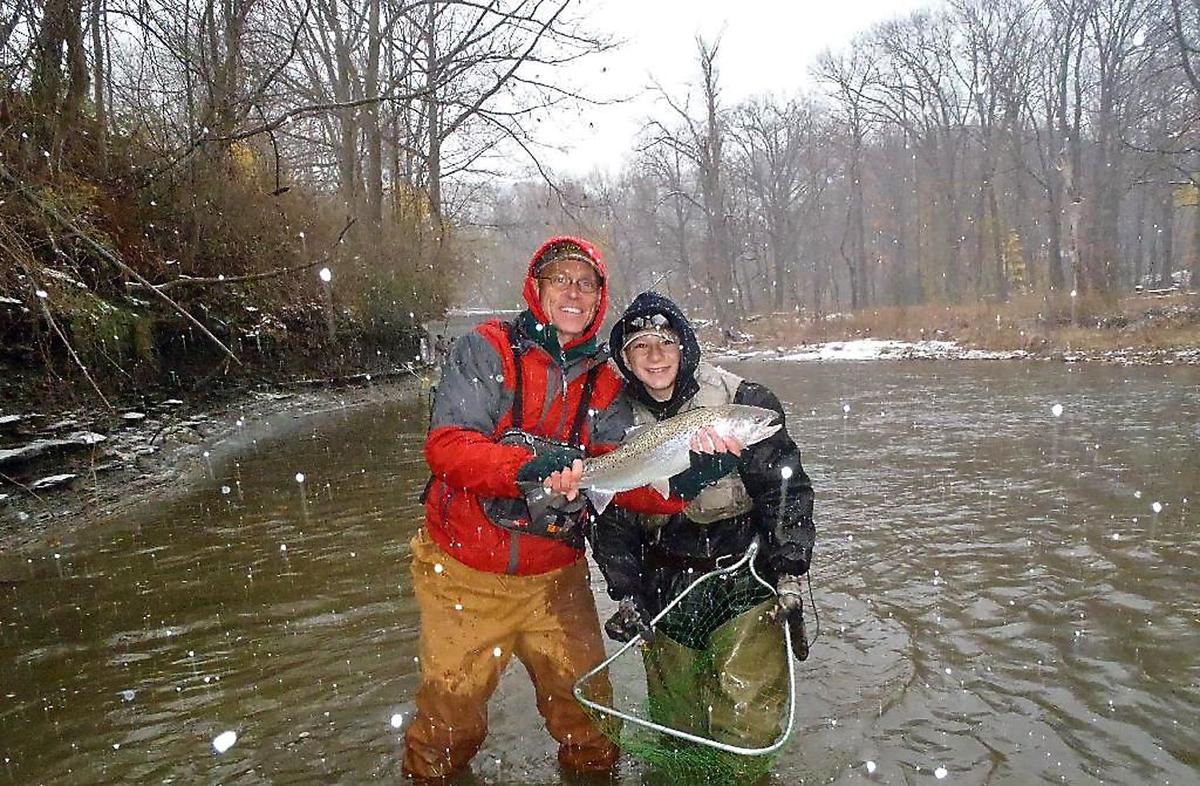 Rick Layton helps one of his former students, Dylan Henkins, catch a fish in Walnut Creek in 2012, when Henkins was a member of Layton’s fishing club. 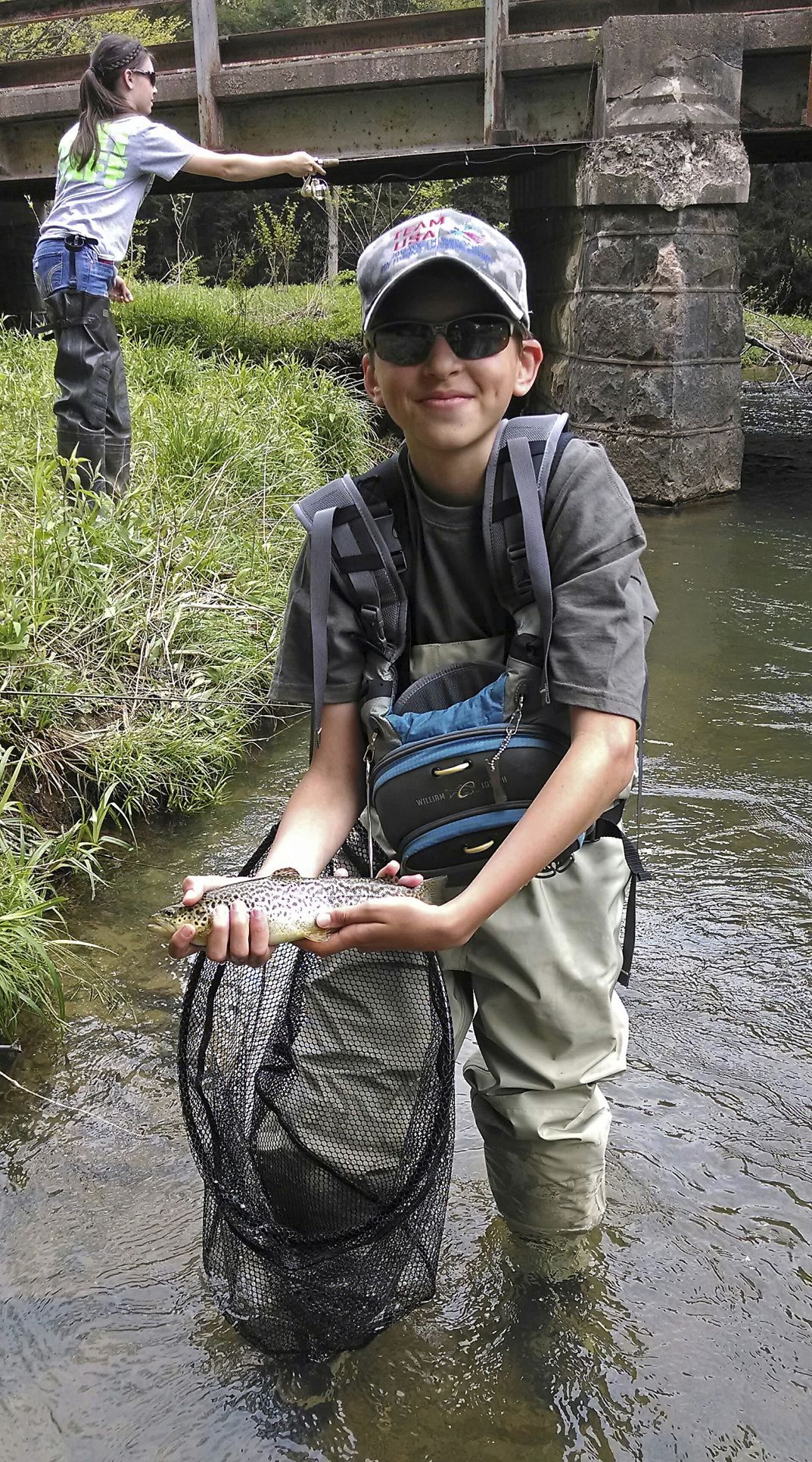 Daniel Phillips, now a senior at Waynesburg Central, catches a fish in Dunbar Creek in 2012, when he was in the middle school’s fishing club. 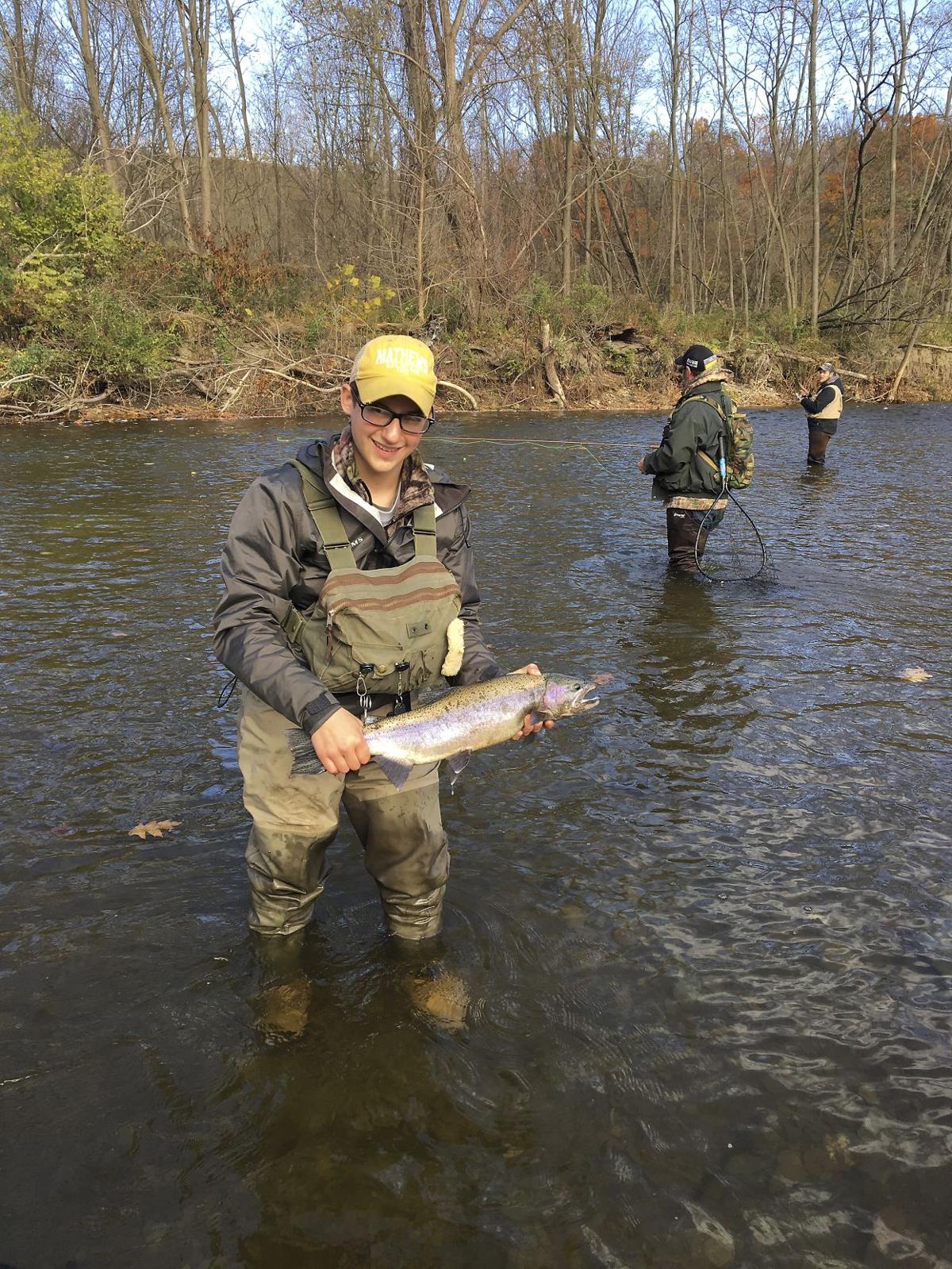 Brady Rhodes, a former student at Margaret Bell Miller Middle School in Waynesburg, catches a fish in Elk Creek near Erie in 2013, when he was a member of the school’s fishing club.

Kaylin Tretenik, a former student at Margaret Bell Miller Middle School in Waynesburg, catches a fish in Meadow Run Creek in 2012, when she was a member of the school’s fishing club.

Rick Layton helps one of his former students, Dylan Henkins, catch a fish in Walnut Creek in 2012, when Henkins was a member of Layton’s fishing club.

Daniel Phillips, now a senior at Waynesburg Central, catches a fish in Dunbar Creek in 2012, when he was in the middle school’s fishing club.

Brady Rhodes, a former student at Margaret Bell Miller Middle School in Waynesburg, catches a fish in Elk Creek near Erie in 2013, when he was a member of the school’s fishing club.

Rick Layton and Dave Fowler have two passions – fishing and teaching middle school students. It was only a matter of time before they combined those passions and started a fishing club at Margaret Bell Miller Middle School in Waynesburg.

“This is what I always really wanted to teach,” Fowler says. “If I’m not teaching it, I’m out living it. I’m in the outdoors constantly.”

Their endeavor began in 2006, when they received a “trout in the classroom” grant from the state Fish and Boat Commission and Trout Unlimited. It allowed them to teach students how to raise trout in a large fish tank in the classroom before releasing them into an acceptable stream at the end of the school year.

The students and the district enjoyed the program so much that Layton and Fowler decided to secure additional grant money for fishing equipment so their students could learn to fish for the trout they raised. During the 2009-10 school year, Layton, a math teacher, and Fowler, a pre-biology teacher, decided to start a fishing club for their seventh- and eighth-grade students to take them out on fishing trips.

“Rick and I do fishing trips together sometimes,” Fowler says. “So one day, I said, ‘Wouldn’t it be great if we could develop a club for this where we could take kids on trips so they could experience it?’”

Layton says the middle school age is perfect for their club because state law requires anyone 16 and older to have a fishing license, which would complicate their program. He also says they try to target students who don’t have anyone to take them fishing and won’t ever get another opportunity like it.

“That is an age where parents are telling their kids, ‘You’re old enough, get outside and find something to do,’” Layton says. “If we can get those kids involved in fishing and programs like that, hopefully it will keep them away from other negative things.”

Once they received the fishing rods, waders and other equipment, they started planning their first field trip with students. Layton says they spent weeks in the classroom, preparing the students with safety lessons and teaching them fishing techniques for the trip. They even taught them how to cast their lines in the school gym. “We have to be very careful,” Layton says. “The first thing we did on that first trip is we made sure to cover safety.”

The first trip was at Meadow Run Creek in Fayette County. They started out with smaller events and day trips within an hour’s distance from Greene County, with about 12 to 14 students fishing streams for trout.

“We’ve had a number of kids who knew nothing about it,” Layton says. “Once they catch one or two fish, their face just lights up and you know you have them hooked.”

From there, the program grew to include one annual, overnight trip to Erie to fish for steelhead trout in streams that feed the lake. They usually take that trip near the Veterans’ Day break, so students often need to bundle up for the snow and cold. “Sometimes we’ll look out the window and see a foot of snow,” Fowler says.

They get a 7 a.m. start driving up to Erie and go right to Trout Run, a stream where no fishing is allowed because it’s part of a reproduction program. The students then visit a nearby hatchery to learn about the fertilization process. “It really ties in with the biology in the seventh-grade curriculum,” Fowler says. “It’s all building on each other.”

Then, they go fishing for steelheads, but throughout the trip, they learn how to return fish from the hatchery to the stream, how to keep the streams clean, how to tie flies for fly fishing and how to monitor different patterns in the streams for the best fishing spots. “We don’t just take them fishing. We try to teach them about the environment,” Layton says.

Colton Higgins, 20, of Waynesburg, and Zachary Koratich, 20, of Franklin Township, are both 2015 graduates of Waynesburg Central who remember being some of the first middle-school students in the fishing club to go on the Erie trip.

“They took us fishing and pretty much taught us everything you’d need to know,” Koratich says. “It was a good time.”

For Koratich, that trip is what launched his passion for fly and bass fishing. When he turned 18, he bought a bass fishing boat and is now involved in many different tournaments and clubs in the area. “I go fishing anytime I can and I help clean up waterways,” he says.

Higgins says he and Koratich will often take off of work or school to help Layton and Fowler with their Erie trips. “It’s fun watching the kids hook a fish, because if they’ve never done it before, it gets them up, active and outside,” Higgins says.

“Over the years, they’ve really gotten into it,” Layton says of some of his former students. “Other kids may not have gotten into it, but at least they were exposed to it and maybe someday will go back to it. Some kids once they catch one, they’ll sit down a while, take some pictures and just enjoy the day.”

According to Layton, some years, students will come back from the trip and ask their parents for fishing gear for Christmas. “We’ve had kids that come back and really delve into it and it becomes a passion for them,” he says.

One of those students is Daniel Phillips, a senior at Waynesburg Central who participated in the program a few years ago. After the Erie trip, he started doing fly fishing competitions all over the country, including Montana and North Carolina. “For a long time that was a good part of what I did,” he says.

Daniel’s younger brother, Michael Phillips, 13, says that after watching his older brother enjoy the fishing club, he also signed up for it when he was old enough. “We fish as much as we can,” Michael says.

Throughout the school year, about 60 students are able to go out on fishing trips with the club. Fowler’s son Dawson, who will be in eighth grade this year, will be one of the students to go to Erie. Dawson says that although he gets to fish often with his father, the Erie trip gives him the opportunity to fish with his friends.

Layton notes that since the grant money has run out, they are mostly funded through anonymous monetary and equipment donors in the community. “I’ve had a number of parents say, ‘I wish someone would’ve done this for me when I was a kid,’” he says.