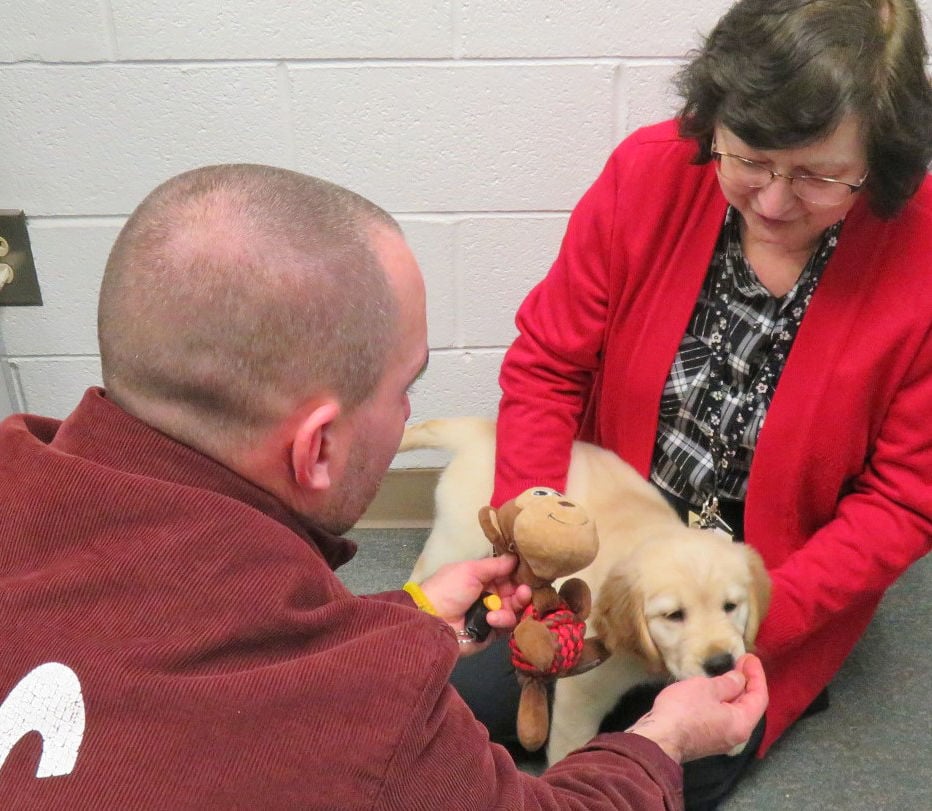 Courtesy of the Pennsylvania Department of Corrections

Sister Sue Fazzini sits and talks with an inmate and a puppy, Ortley, in training for Canine Partners For Life. 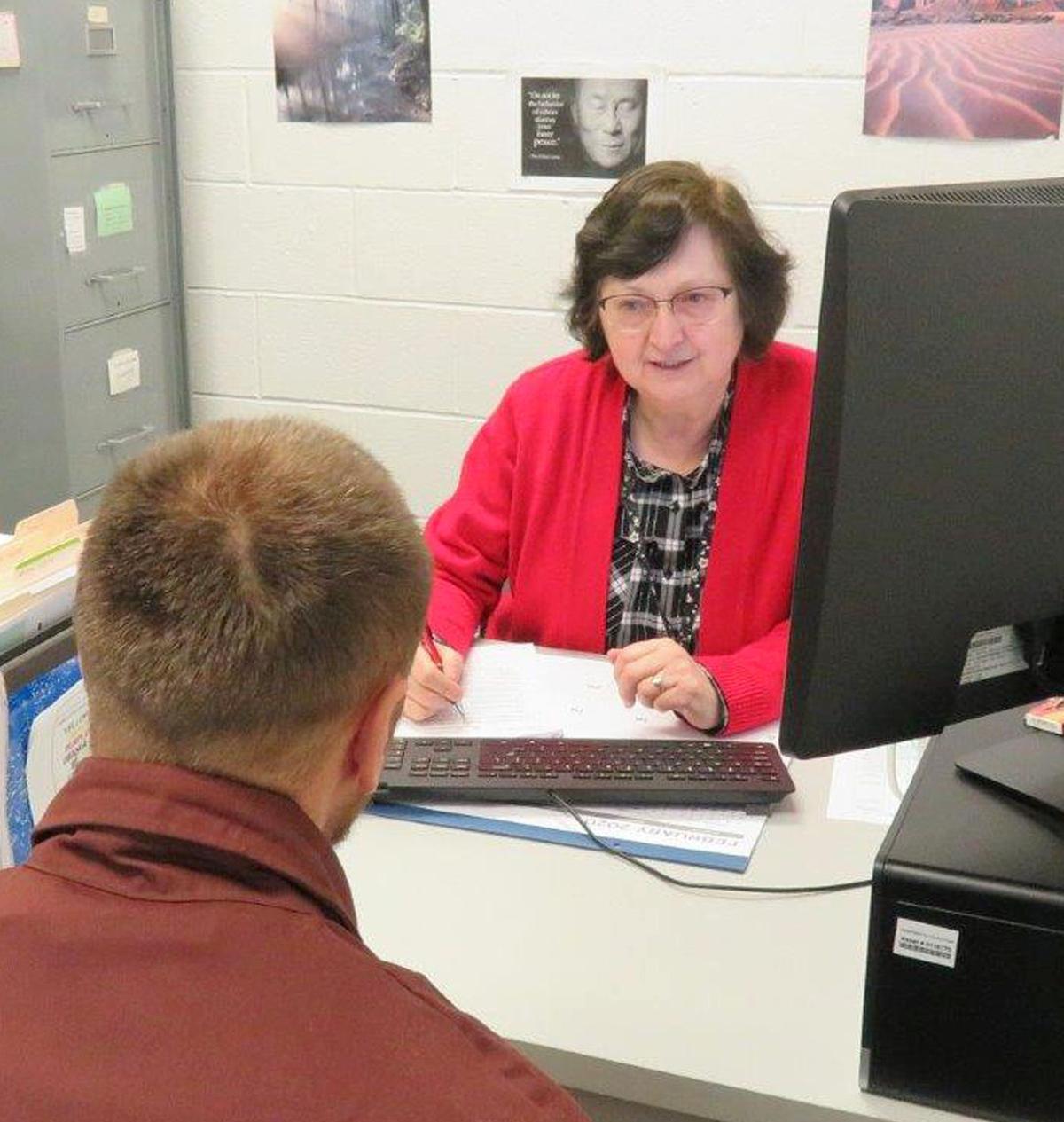 Courtesy of Pennsylvania Department of Corrections

Courtesy of the Pennsylvania Department of Corrections

Sister Sue Fazzini sits and talks with an inmate and a puppy, Ortley, in training for Canine Partners For Life.

Courtesy of Pennsylvania Department of Corrections

Sister Sue Fazzini grins at me from across the table.

It’s some minutes after 3 p.m., she’s just gotten off work at SCI-Greene, and we’re munching fries at Arbys on State Rt. 21 just east of Waynesburg. Between us is the form I have to fill out to gain access to the world behind the razor wire and electronically locked doors where this Benedictine nun is doing the work some might say she was called to do, for the last 15 – going on 16 – years.

I’ve come to discover the details of a life spent, not in a convent but a community – in this case, Greene County. And I’m here today to fill out the forms so l can sit with Sister Sue in her office behind prison walls and see for myself what changes her drug and alcohol treatment programs have brought to the lives of the inmates she serves.

Susan Fazzini grew up in Donora, with five brothers and four sisters, in a working-class Italian family who knew poverty when the mills shut down.

“Donora is culturally diverse – we all lived side by side. I remember when I didn’t have shoes for school in fourth grade, someone bought me new saddle shoes, and I slept with them!”

The kids she went to kindergarten with at St. Phillip Neri are still some of her closest friends: “We still go to the fish fries.”

After graduating Mon Valley Catholic in 1972, “I dated, did odd jobs… but then I went on a retreat at St. Benedict Monastery and felt a deep sense of belonging. I remember I was dating a guy, but I went home and broke up with him. Nobody believed me when I told them I was going to be a nun!”

Fazzini took her vows in 1976 and spent the next four years studying sociology and theology at Carlow College, then on for a master’s in counseling at Indiana University of Pennsylvania.

By 1982 she was teaching elementary grades in Catholic schools and leading campus ministries at IUP. She worked with students and volunteers, learning the ropes of grassroots community service.

When the Benedictine community decided it was time to disperse its sisters to live and work in places that needed them in 1989, sisters Sue Fazzini and Audrey Quinn chose Greene County “because there were no sisters there.” They rented a farmhouse in Jefferson and settled in to see what they could do to help out. They became foster parents, volunteered with Habitat for Humanity and got to know their neighbors. Within months Fazzini had a job at the CARE Center doing drug and alcohol programs.

Neighbors made them a permanent part of the community when the late Carl Seig bought them a house near Ruff Creek in memory of his wife, Jean. Chance encounters of the best kind continued, and continue, to shape their lives.

After six years of counseling at CARE, Fazzini found her true calling, on Martin Luther King Day 2004, in the produce aisle of Shop ‘n Save, she tells me with a huge smile.

“I ran into (SCI-Fayette supervisor) Laurel Harry and was telling her about my bad day at work. She said, ‘why don’t you come work at the prison?’ I said, ‘What do I have to do?’ She ripped a piece of paper off a potato sack and wrote the website on it. I took the test and by April I was a drug and alcohol treatment specialist. There were two openings that year, one in Fayette and one in Greene. I took Greene.”

Fazzini’s first impression of her new workplace? “It was huge – so many people! I thought it would be dark and dank and claustrophobic, but it was bright and clean. I wanted to learn all the rules. I wanted to help. My co-worker Mark Dialesandro told me, ‘I know you know treatment, but you don’t know how the prison works.’ He was a great teacher.”

A year later, Fazzini was in charge of Impact of Crime – a voluntary class that brings victims in to tell inmates how their lives were affected by what they experienced.

“It’s voluntary – inmates come because they want to change – they finally figure out what their actions have done to others. That makes a difference for them – and all of us – when they transition back into society after serving their sentences.”

“We have a victim of sexual assault who will be coming to an upcoming Impact of Crime class. It’s very healing for the victims to tell their stories. Some have become repeat speakers.”

By the time I find myself sitting in Fazzini’s tiny but surprisingly intimate office, I’m warmed by its eggshell-colored walls studded with bright bits of promise – a serenity poem against a rainbow landscape, the calm face of the Dali Lama delivering the spare poetry of truth, Fazzini behind her desk wearing a red jacket and a smile.

Superintendent’s assistant Tracy Shawley escorted me here from the lobby, where I managed to beep the security entrance half a dozen times before I found the pin hiding behind the collar of my vest. Like Fazzini, my first impressions have blown away the dark clouds of imagination. I’m startled to find myself comparing the outside, with its low-slung white walls and red roofs to a Spanish mission. We greet inmates and counselors as we walk between buildings, and Shawley points to this wing and then another. There’s where those with substance abuse and mental health issues are quartered, where they receive the help they need, over there is where those who have transcended to stability can live. We pass through corridors, pass-key through electronic gateways, the code written on my hand is scanned by a guard, then another hallway with encapsulated classrooms on the side. Then there’s Fazzini, beaming, telling me I’ve chosen a serendipitous moment to arrive. She’s doing work with Ed, who volunteered to meet with the victim of the crime he committed, and would I like to interview him? Is that okay with you, Ed?

Ed and I size each other up, laughter fills in the blank spaces, and Fazzini leads the session.

This more intimate, intensive extension of the healing process is called Victim Offender Dialog. The program is replicated in every state prison in Pennsylvania, with the help of volunteer counselors. Fazzini is trained to facilitate here in Greene County and across the state.

It takes about a year of counseling for both parties to prepare to meet and discuss what transpired between them. In the last two and a half years at SCI-Greene, Fazzini tells me, eight meetings have been conducted, and Ed’s was one of them.

Ed’s restless eyes steady as he answers. “I didn’t know what to expect.” Pause. “She was so nice.” Another pause. “It was mind-blowing.”

I’m not permitted to bring my camera here, so Shawley takes the photographs. One last image I’ve asked for is a glimpse into that other state prison-sponsored program of healing that benefits the most vulnerable amongst us: those who need service dogs to live a more enriched life, paired with those who are ready to give their love and affection to another, even behind prison walls.

Ron comes into the office with Ortley, named after a beach in New Jersey, nine weeks old and beyond adorable. Since 2014, SCI-Greene has trained 26 dogs. Ortley makes 27.

“I asked for her,” Ron tells us as he lets this big-footed, amazingly calm pup loose to be petted. Ron has trained other dogs while serving time here, is part of a two-man team that takes their pups everywhere in their day to day behind prison walls. Within ten months to a year, the puppies are ready to be returned to Canine Partners For Life and trained to serve individuals with unique needs.

Part of the early training while in Greene County also includes volunteers from the community who take the pups out for a day of car rides, shopping, visit nursing homes and generally getting used to the outside world.

It doesn’t surprise me one bit to learn that after Sister Audrey Quinn retired from managing Salvation Army in Greene County in 2019, she is now volunteering with Canine Partners for Life. She just happened to meet some people who were walking their pups and….