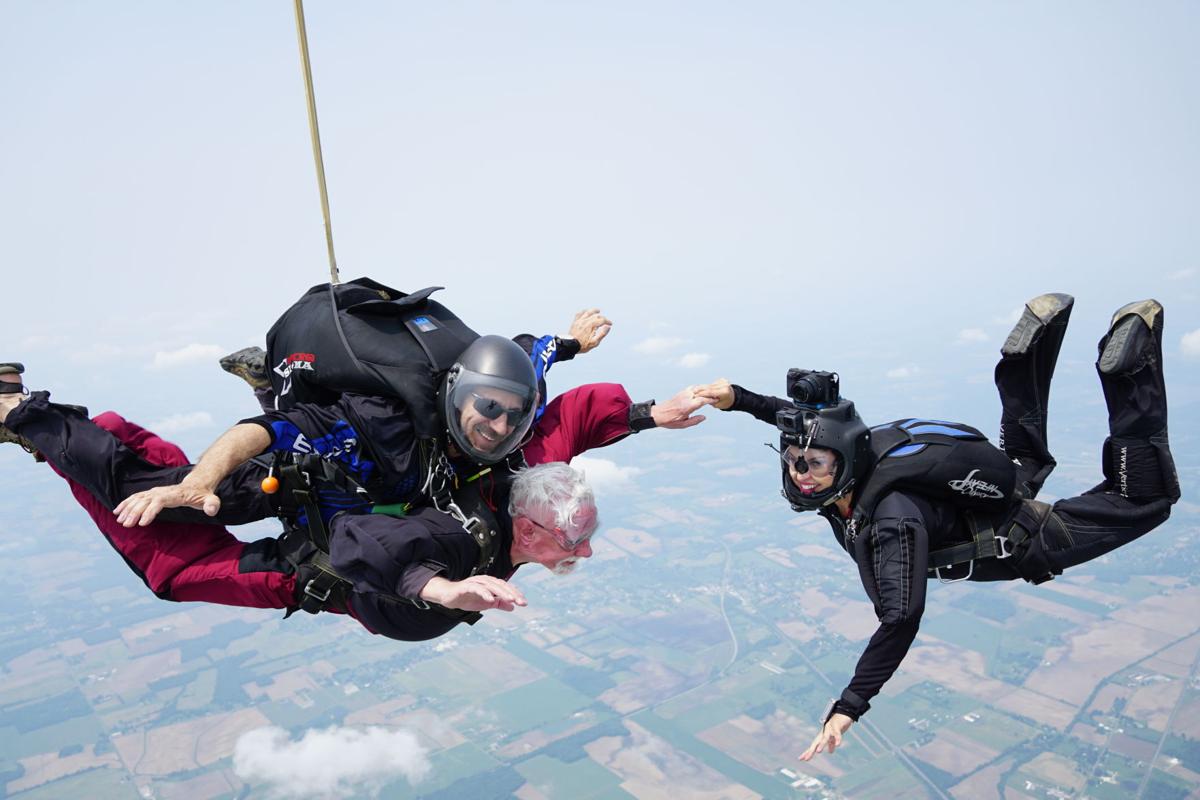 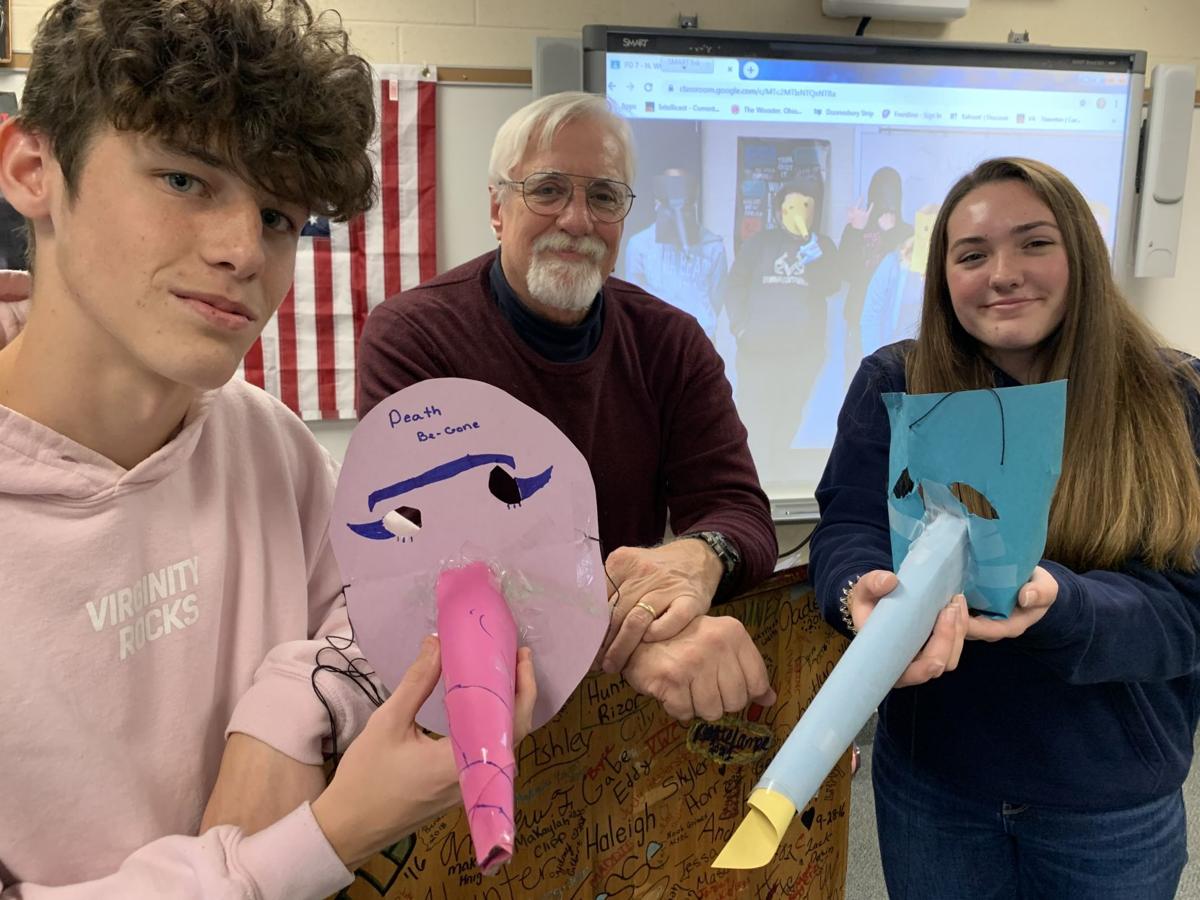 West Greene History teacher Frank Hunter is back in school – at 130 miles an hour. And his teachers are literally riding his back or waving, grinning and filming him as he hurtles through the endless sky to the ground below.

When you pull the ripcord, you’re only doing “about 20 after the chute opens,” Hunter assures me, his trademark smile breaking through his Santa-white goatee. Then you have to land just right, that’s the critical part. I’m in training now to strengthen my knees…..

I’m tucked into a student’s desk in the ninth and tenth-grade history classroom at West Greene High School, notebook ready, soaking in the details of the room and listening to some cool as heck history being told, Frank Hunter style.

He points to the back of the room. “See that gooey mess – that’s the fall of Rome.” Historical moments drawn by students pop on walls and ceiling tiles, you can feel the fun of getting involved in the real-time that history once was. “See those masks over there – plague masks” that ninth-graders make and wear as doctors did during the Black Death. Make it real, make it fun, and keep those growing minds engaged. With Frank Hunter leading the way, otherwise boring facts become memories that last a lifetime, memories that just might lead to some “aha!” moments in the future when the present shows itself to be yet another blast from the past.

“I always knew I wanted to be a teacher – a history teacher.” Hunter grew up in Brentwood, seven miles from downtown Pittsburgh, a suburb where city and country strike a happy balance. “Teacher bound” was never in doubt – In Boy Scouts, Hunter taught swimming and canoeing to his fellow troopers and learned the lessons of endurance on winter camping trips with his pack. Tall and athletic, he excelled in track, a passion that would follow him to West Greene. “I coached for 33 years, and they finally got the track I wanted when I quit coaching,” he jokes.

This is a teacher who jokes a lot, and with the laughter comes learning.

After graduating from Bentworth High in 1966, he passed over schools like nearby Pitt, that seemed to him too big, and party-oriented – “I could see trouble coming right there!” – and headed off to small, Baptist-founded Alderson Broaddus College in the hills of West Virginia. “The first land battle of the Civil War happened there, you know.” The campus, overlooking picturesque Philippi, won him over. Still, he wasn’t above tweaking its old school Baptist sensibilities with an iconic Seagram’s Seven that stayed in his dorm room window even when ministers stopped by for conferences. Hunter hit the books and learned not only history but also how to be an effective teacher from a favorite mentor, “Dr. Cark Tideman. My teaching voice is his. He’s talking to you, not at you.”

Hunter was happily aware of his own cultural history in the making in 1969 when he and three college buddies went to Woodstock in –what else? – Hunter’s 1967 Volkswagen Bug – and were amazed at the size of the crowds and what they could hear of the music, he tells me, grinning hugely. One of those buddies was college sweetheart Judi Evans, who would become his wife of 47 years.

Hunter did his student teaching at a “1930s middle school in Grafton West Virginia with a traditional teacher who taught straight from the book.” Disenchanted, he went home to Pittsburgh and got a job with Eastern Coal Corp. working in the lab doing quality control. He found himself testing the coal that was coming out of Greene County mines and was there when it was discovered that coal could be turned into gasoline for “a dollar thirty at the pump, but then the price of gas was something like 75 cents so that never happened.” After three years, Hunter went back to his first love, subbing in Pittsburgh schools before being hired at West Greene to teach history and English. Paul Polink was principal, he remembers, and teaching history was in flux.

“In 1977 nobody could agree what was important in history and as a result it was broad. Do we do just European or global?” During Hunter’s years, teaching history has caught up with our changing times through a new generation of teachers, textbooks and now the Internet.

After a year of driving an hour and a half one way from Peters Township, the family bought a home on the north side of Waynesburg, and Mr. Hunter settled in to teach, coach, mentor and turn fellow teachers, students and parents, including myself, into friends. I ask him, “Why teach?” and he answers with a metaphor. “Society gives you a big ball bat. Society is a tank, and that ball bat is education. My teaching inside the tank can change the tank’s direction.”

Hunter’s beat is European history with ninth graders, American History from 1880 to the crash of 1929 with sophomores. Part of the online lesson plan has Bob Dylan singing “The Times They Are A-Changin’.” Times do change, Hunter points out – what we experience as the present is a cultural moment, that, if notable enough will be captured in tomorrow’s history books and online sources, preserved by the art, events, edifices and lives of those we future selves deem worthy of remembering.

Ten years ago, Hunter got a student teacher worth remembering. “I’ve had 15 all told, and Casey Magyar was one of the best, very creative. She’s a history teacher now at a Vo-Tech in Ohio. And she’s a skydiver.”

Magyar was the student teacher who helped Hunter set up the online lessons to keep students up to date on American and Global history. She is also the one who contacted him six years ago, after his daughter Katie died from a rare polyglandular autoimmune disease, suggesting that he try sky diving for a much-needed change of pace. Hunter admits he wasn’t ready. “I thought, I can’t do that – I’m an old guy!”

Wife Judi’s problems with her heart worsened after Katie’s death. Friends and coworkers got a hint of how serious it was when Hunter took a sabbatical in the fall of 2018 to care for her until her death on Dec. 12. He posted his love for her on Facebook, and we friends mourned with him. But as a sad Christmas loomed, a BuzzFeed article arrived, showing Irene O’Shea, 102 years old, jumping at 14,000 feet over Southern Australia on her birthday, along with a cheery “See! You’re still young!” from Casey Magyar.

By January, Hunter was back in the classroom, “grading tests and listening to Simon and Garfunkel’s greatest hits.” On May 4, he posted, “Well, I’ve finally done it! No, not retire – YET. But on June 2nd, I’m heading to Aerohio, where I will be jumping out of a plane at 13,000 ft. in a tandem skydive.”

Hunter was ready to prove, especially to himself, that “70 is just a number.”

During that first free fall, 45 glorious, timeless seconds with the roar of the air all around, “I understood exactly why I needed to do this. I could feel the fear shredded from me, the stress. I was exhilarated and alive.”

The drop zone at Aerohio Skydiving Center in Rittman, Oh., is 170 miles one way, and Hunter has been back five times since, whenever the weather allows. That’s quite a drive, Frank! Have you considered flying?

His eyes sparkle. “Why, yes, I have! I’ve visited the pilots club at the Greene County Airport, and they’re a nice bunch. I think I’ll learn to fly.”