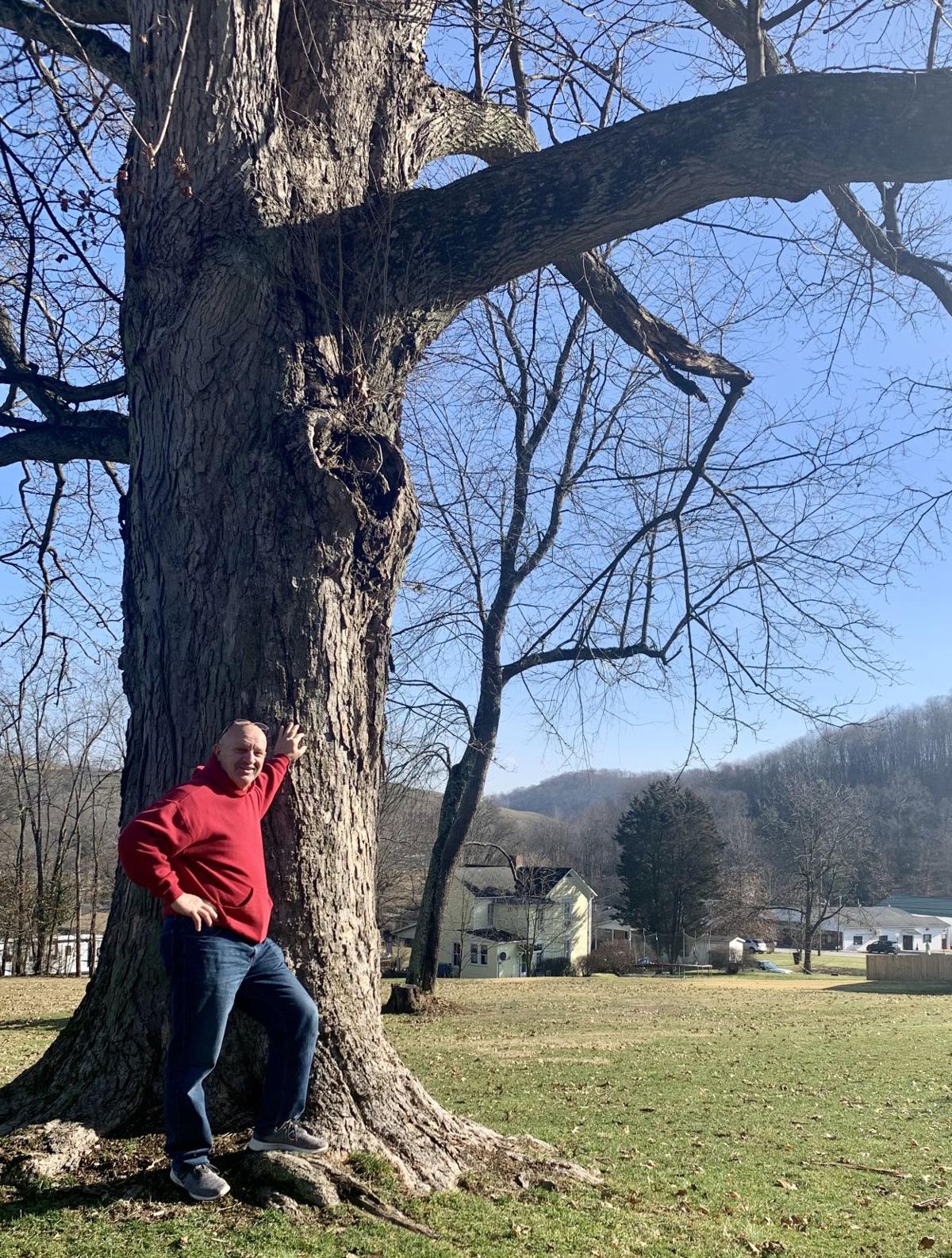 The massive sugar maple that marked the geographic center of Greene County in 1796 still stands tall in Rogersville in Kevin Wilson’s backyard. 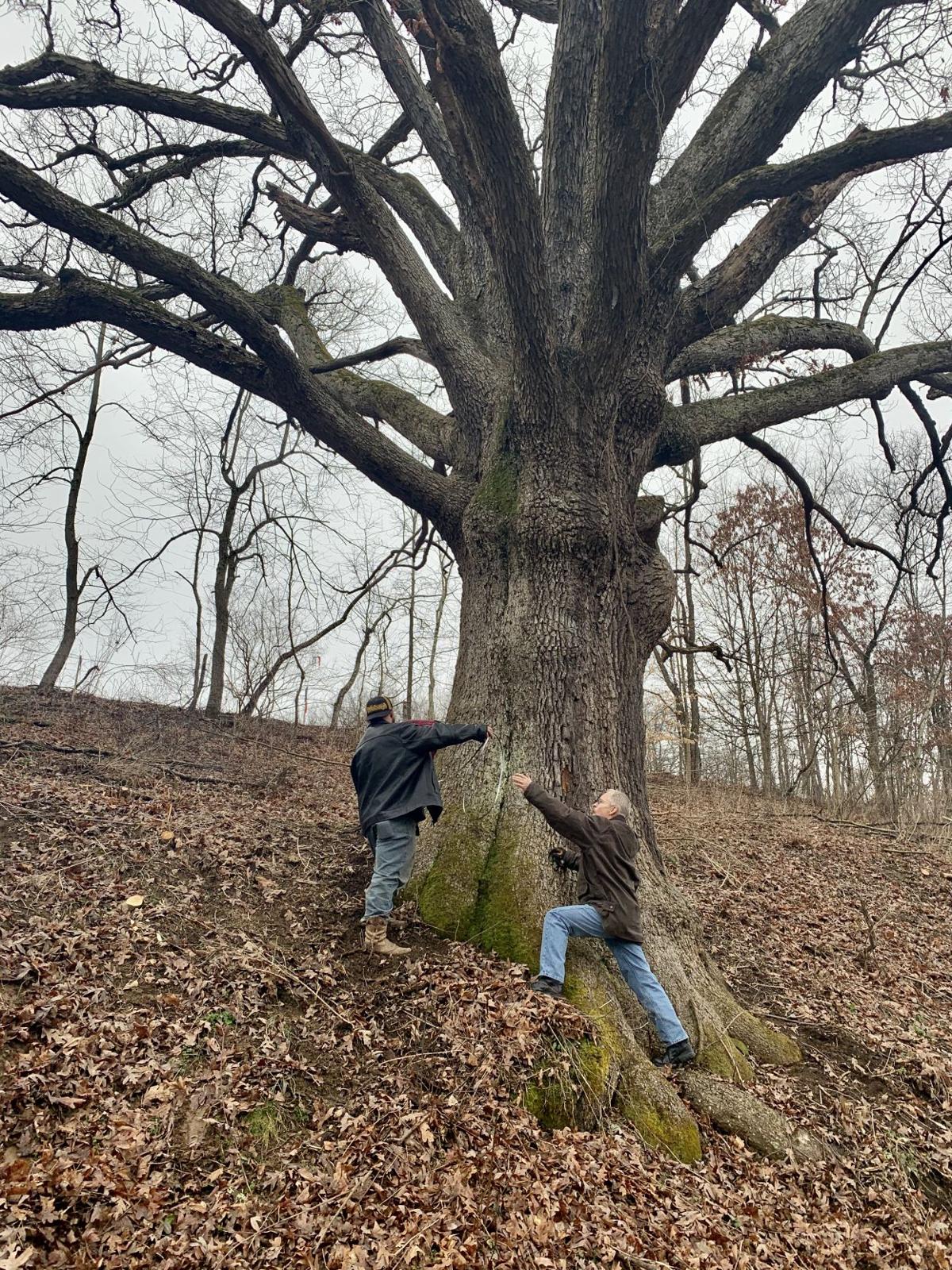 Measuring the massive Penn oak tree is a two-man job. 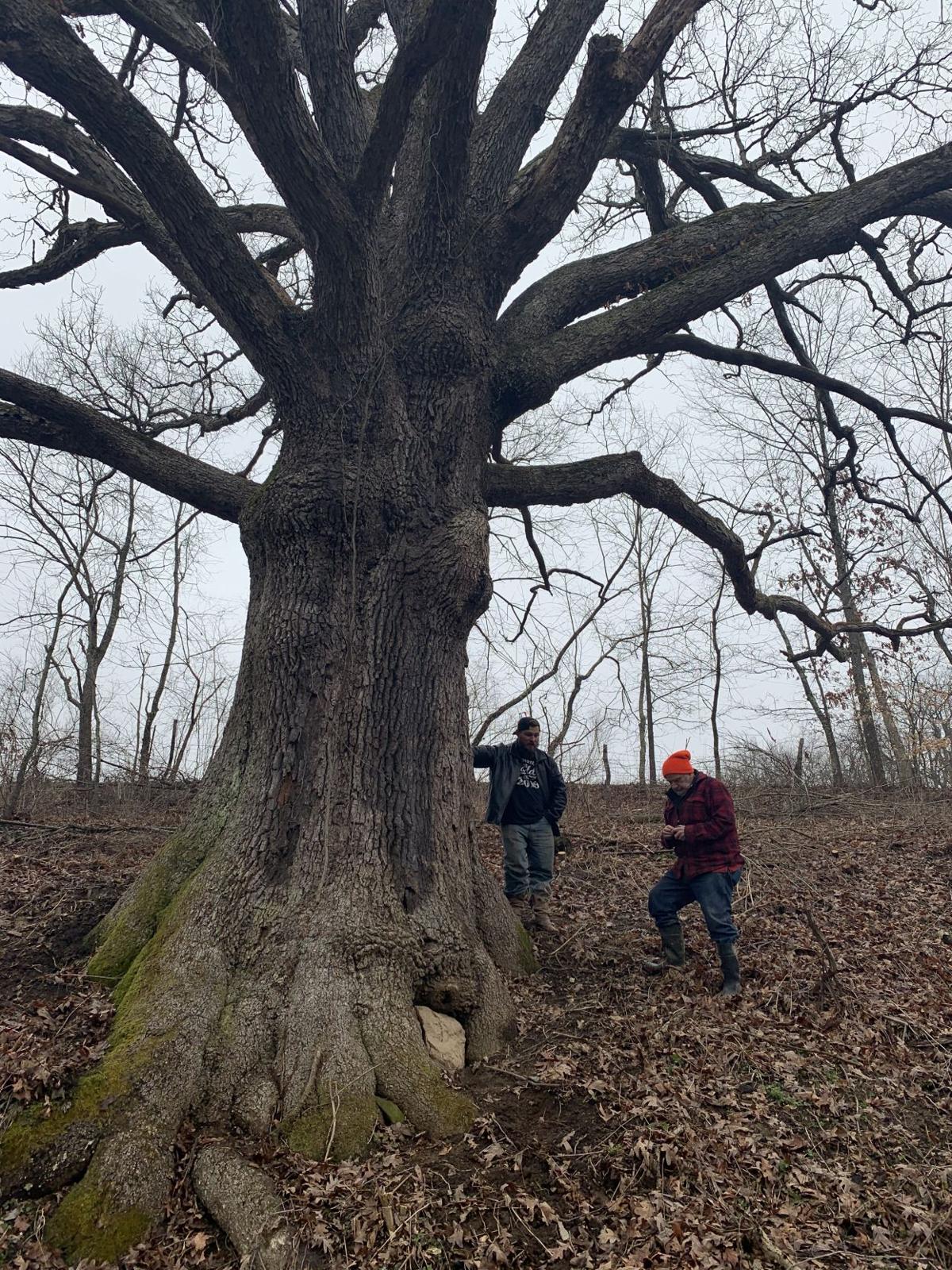 David Peters and Tom Waters beneath the Penn oak tree 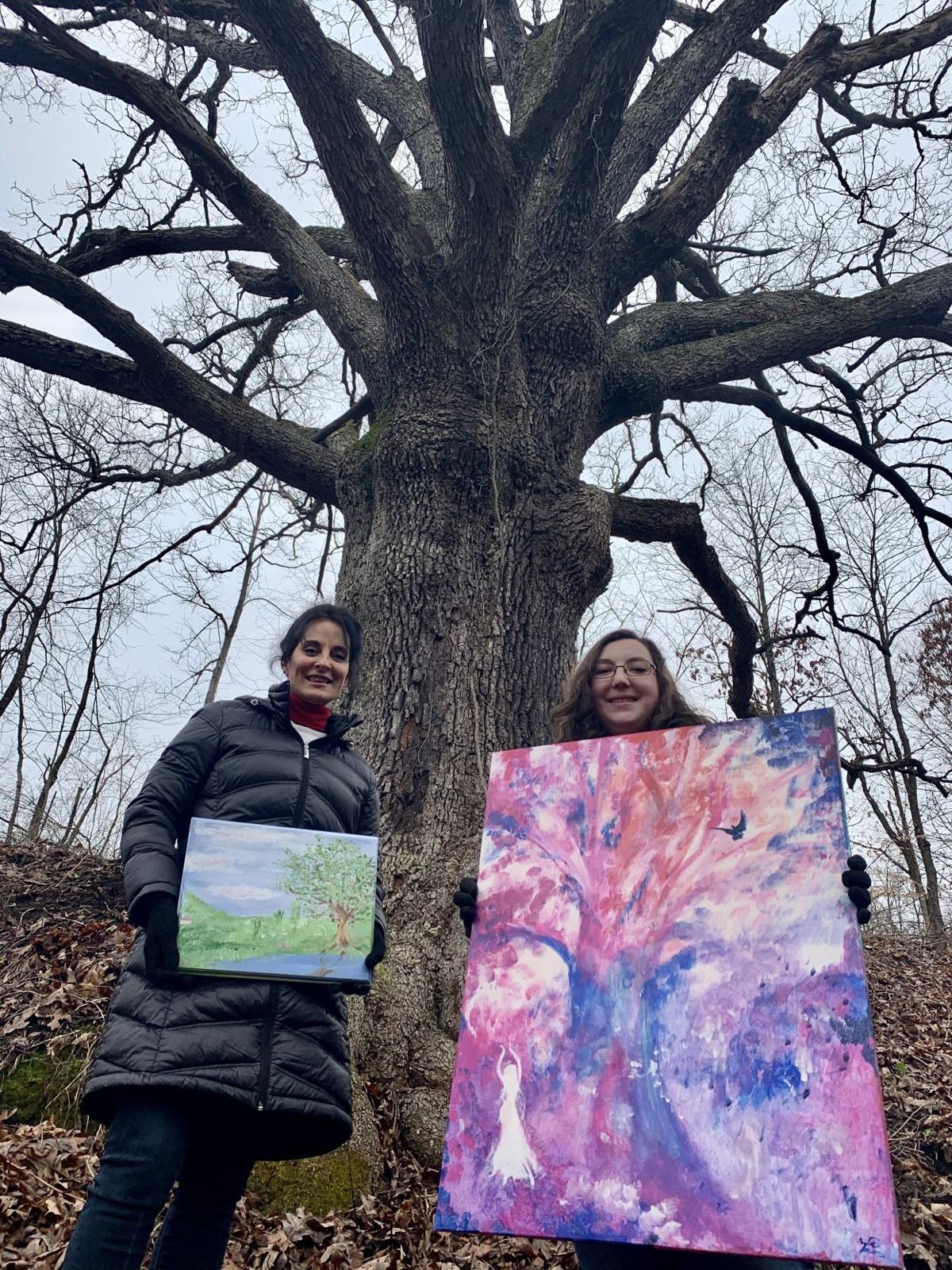 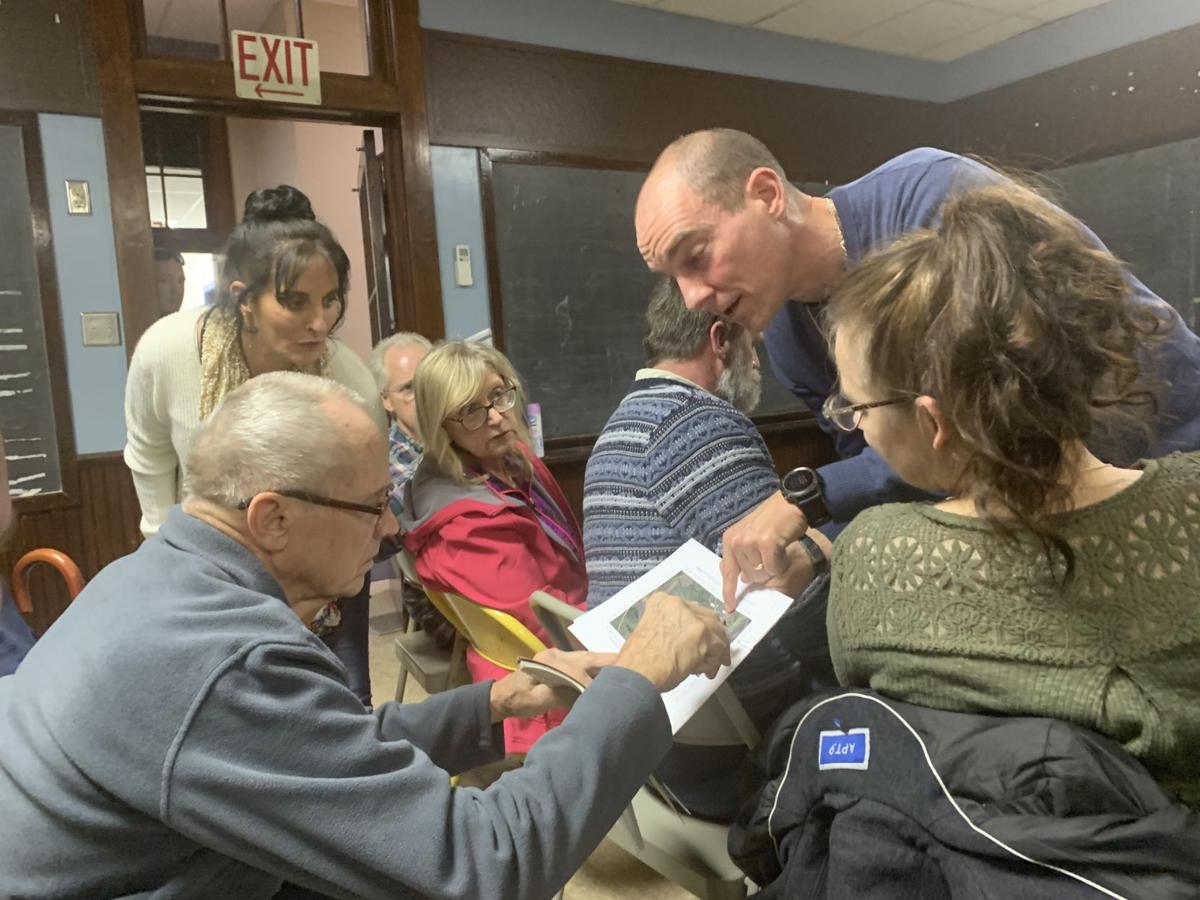 EQT landman John Zavatchan points at a map during a Morris Township zoning board meeting as community members look on. 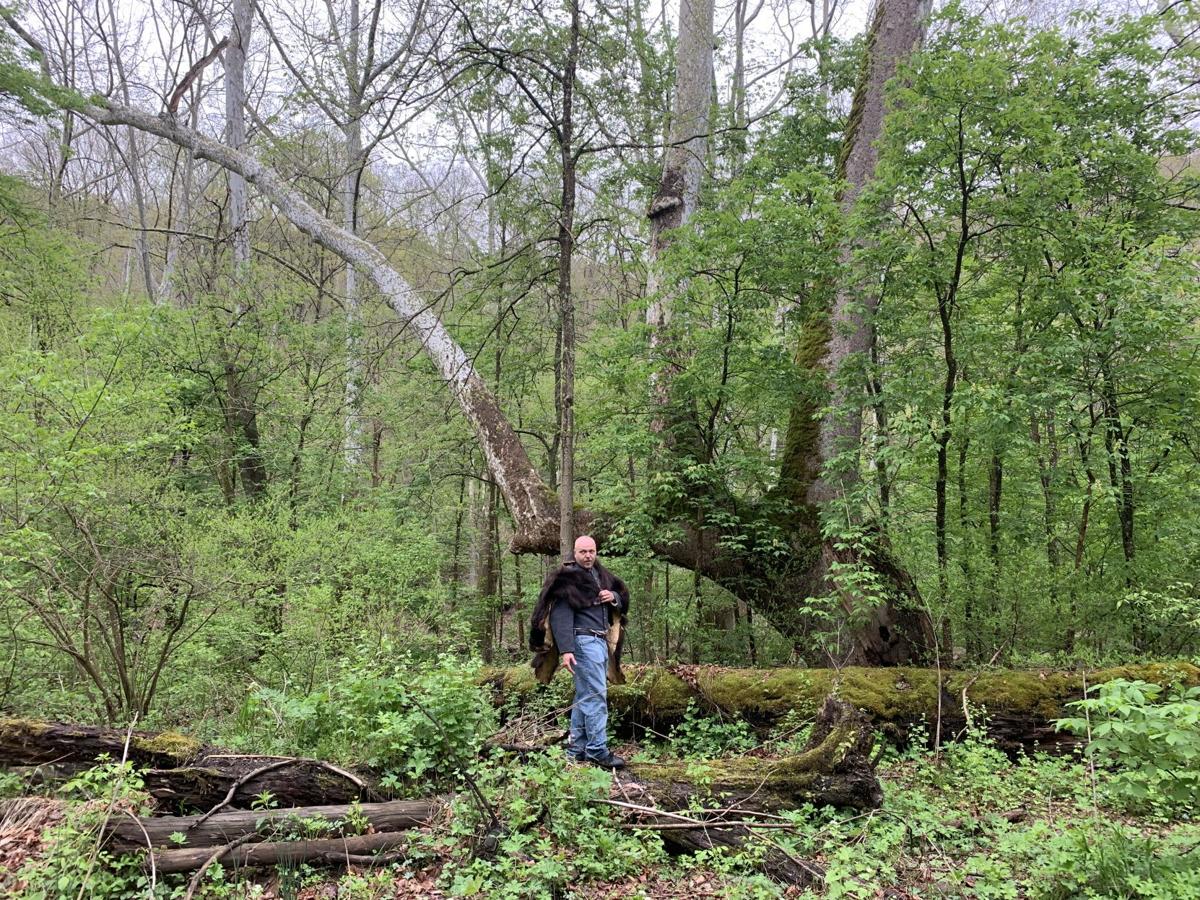 The massive sugar maple that marked the geographic center of Greene County in 1796 still stands tall in Rogersville in Kevin Wilson’s backyard.

Measuring the massive Penn oak tree is a two-man job.

David Peters and Tom Waters beneath the Penn oak tree

EQT landman John Zavatchan points at a map during a Morris Township zoning board meeting as community members look on.

Gray and wrinkled, the roots hold to the hillside, each one thicker than me. The massive trunk stretches up then sprouts a crown of branches stretching in every direction, filling the sky.

It’s a perfect winter Sunday, and I’ve scrambled up a hillside to stand in the presence of a rare wonder of nature, a mature – 400 years and counting – white oak tree.

“Wow!” I say before I realize I’m saying it.

This tree has been guarding the valley that Route 18 winds through going north from Nineveh since before the first land tracts were issued here in 1784, since before King Charles II granted the colony of Pennsylvania to William Penn in 1681, since before the Pilgrims landed in Massachusetts.

This is a Penn oak tree, a nod to the fact that it was alive when the Quaker William Penn first visited his Crown grant in 1682, determined to make Pennsylvania – “Penn’s Woods” – a colony that welcomed all religions, made laws that were just, paid indigenous tribes a fair price for their land, and set up Friends schools to educate all. It’s estimated that perhaps 300 of these trees still survive, mostly in Chester County and points East, where parks and historic plaques pay tribute and protect them.

Quercus alba – white oak – grows in the mineral-rich, well-watered hills and valleys of Appalachia. Slow growing and tenaciously rooted, they can live for 800 years and reach enormous size.

It was 200 feet high and eight feet wide. An acre of land around it became a federal park while it lived, and picnics and Sunday sermons were held in its shade. It’s widely thought that sulfur fumes from a nearby coal waste dump suffocated it in 1938, but pieces of it are preserved in the Smithsonian.

The tree on Chris and Lesley Stockdale’s farm is a tad over six feet in diameter, about 100 feet tall, unscarred and healthy. By the looks of it, it has a few centuries more to go.

The family joins me on the hillside. They bring paintings that have been done of it, along with its certification as a Pennsylvania Champion Tree, the largest registered tree in Western Pennsylvania. It has its own Google pin if you want to visit, Chris Stockdale tells me. As we talk, the 21st-century chapter of what might happen next begins to unfold.

I’m not the only one who wonders how this giant managed to survive the centuries when white oak was used for everything from barn beams to tables and railroad ties. The best guess is that it was a line marker when those first land grants were surveyed in 1785.

But the thought on everybody’s mind today is how do we save it now?

When the old Lightner farm went up for auction in 2017, the Stockdales negotiated with CONSOL Energy to include it in their undermining settlement. Its fields border their land, and the white barn, big enough for a community square dance, was certainly worth saving. But it was the old tree on the other side of the barn that was the real diamond in the rough. It stood half-buried in dense undergrowth that, once cleared, showed the world its true size. The extended family fell in love with it. Son Christopher and Amanda Peters considered getting married beneath its canopy. Amanda’s sister Hannah Peters did paintings of it, and their mother Laura named it Orla after a magical tree that was part of a fantasy story she once wrote for her children.

Retired airline pilot Chris Stockdale is a Hopkins on his mother’s side, and Hopkins have deep roots here. Twelve times great grandfather John left England for Massachusetts in 1640 and by 1815 Levi Hopkins had found his way to Greene County.

“I’m seventh generation Morris Township native, our daughter Carly is eighth. My family left for Michigan in 1967 because my dad got a job with Ford, but I never forgot this place.”

“We’ve admired this tree ever since we moved back in 2000, and we’re thrilled to own it now.”

The Stockdales knew that CONSOL had an agreement with EQT to build an access road on the Lightner farm and that EQT would begin drilling after the land was undermined and declared ready.

“We drew up a legal agreement with EQM (Midstream) when we signed off on the easement for the waterline, and we included saving the tree.”

So it came as a shock when the family reviewed the proposed EQT terracing plan for the access road and saw that it included clearing everything from the hillside.

Chris remembers sitting at the first zoning permit meeting, wondering, “why no one was saying anything. So I stood up and start asking questions to see if there was a way to work the road around the tree. I told them I’m not against the well; I’m not against drilling. It just seems there has to be a way to build the road without cutting the tree. That got people talking, and EQT finally said they’d look into it and get back to us.”

Another meeting was scheduled for the following Monday, Feb. 3, and the Stockdales began to explore their legal options.

Laura Peters, who now rents the home and lives on the farm with her family, took a photo of her husband Stephan standing beside it and posted a plea to save the tree on Facebook. Friends began calling friends, sharing the link. When a friend in Pittsburgh sent me Laura’s post, I squinted into my iPhone, saw the tiny figure of Stephan under the massive canopy, said, “wow!” and began sharing too. I realized our rural, picturesque, tourist destination corner of the state now had three wondrous heritage Pennsylvania trees to promote.

The massive sugar maple that marked the geographic center of Greene County in 1796 still stands tall in Rogersville in Kevin Wilson’s back yard. The huge bent sycamore along the banks of Enlow Creek on State Game lands 302 marks a tribal trail that predates European settlement. Now we have this, a rare Penn oak, hiding in plain sight beside Route 18, waiting for the historic recognition it so richly deserves.

On Monday evening, the atmosphere in the Morris Township Community building is an edgy mix of wary anticipation, and neighborly hellos as the meeting room fills up, and more chairs are brought in. EQT representatives stand to introduce themselves, and landman John Zavatchan describes the project being presented to the zoning board, the steps they will take to protect nearby homeowners from the decibels the drilling process produces when work begins sometime in 2021. We hear ballpark estimates for production and drilling on the Clemente well pad for the next decade, sketched against a backdrop of an ever-changing market economy.

And then for the Penn oak tree. A cartoon graphic of the tree and its canopy

superimposed on the permit map is brought out. It shows us the changes EQT is proposing that will leave the tree standing when the access road cuts into the hill.

A startled silence hangs in the air.

Then a ripple of relieved laughter, someone claps and questions begin to fly. It suddenly feels quite neighborly in that room.