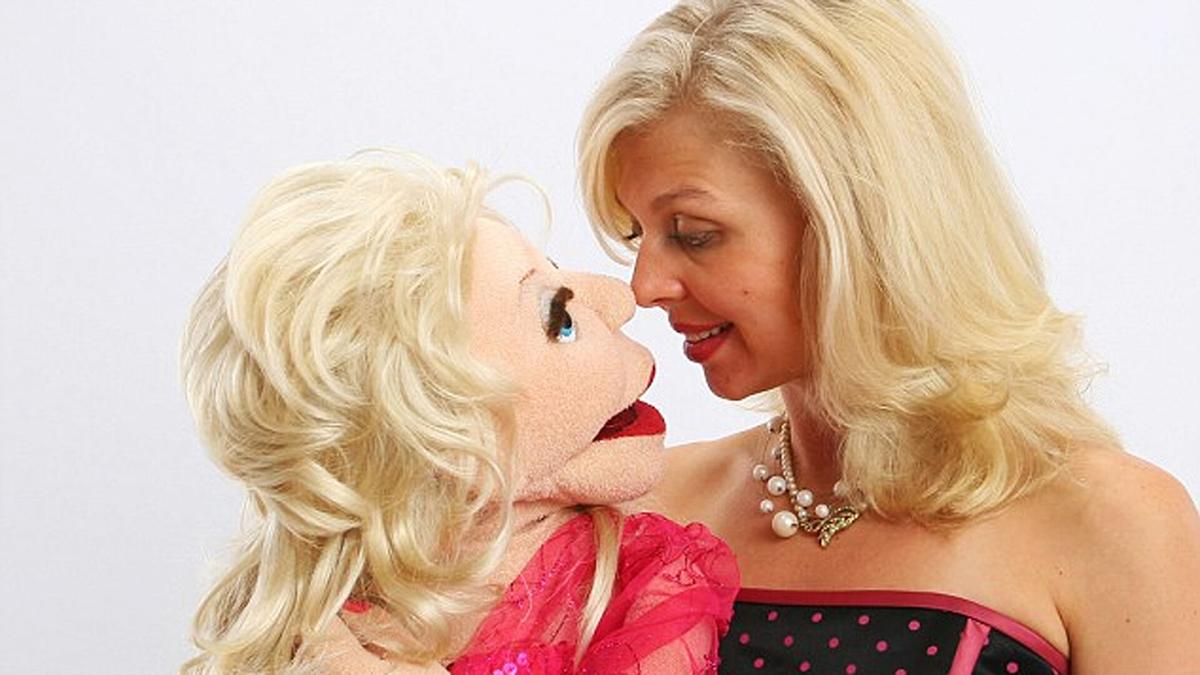 April Brucker with the irrepressible May Wilson 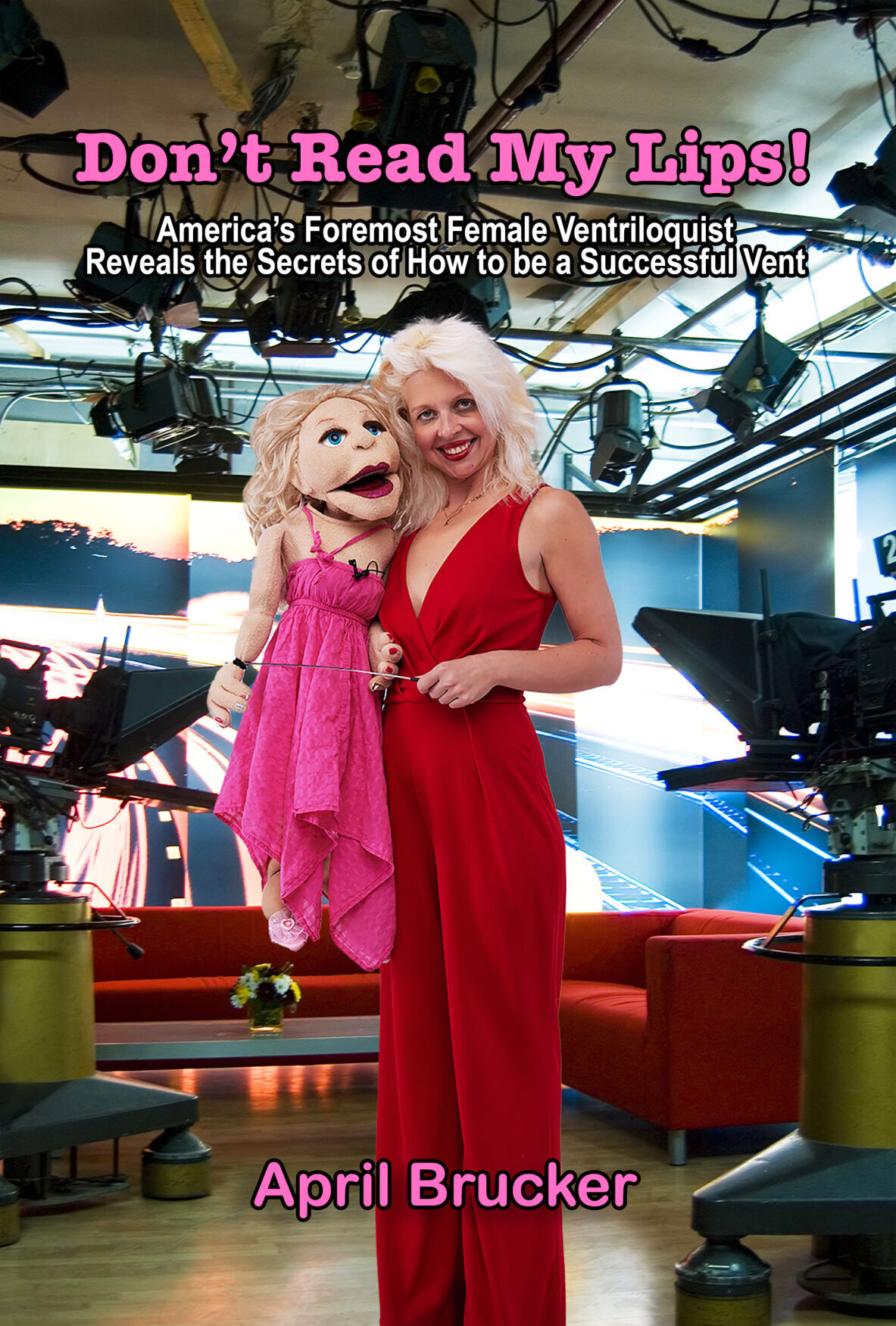 April and May crack up Harry from Las Vegas during the trio's Zoom call. 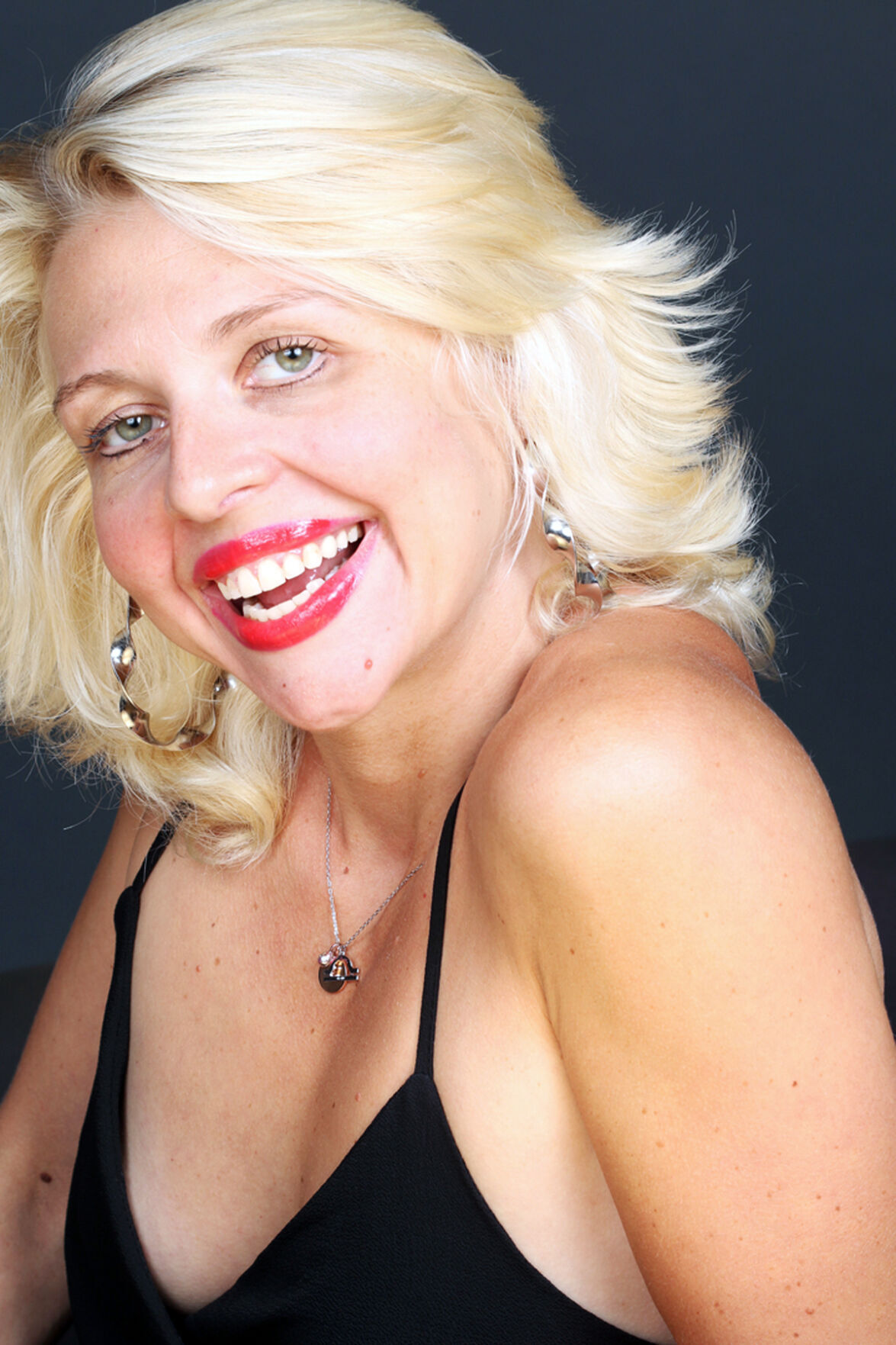 If you like to laugh, meet Bethel Park native April Brucker. 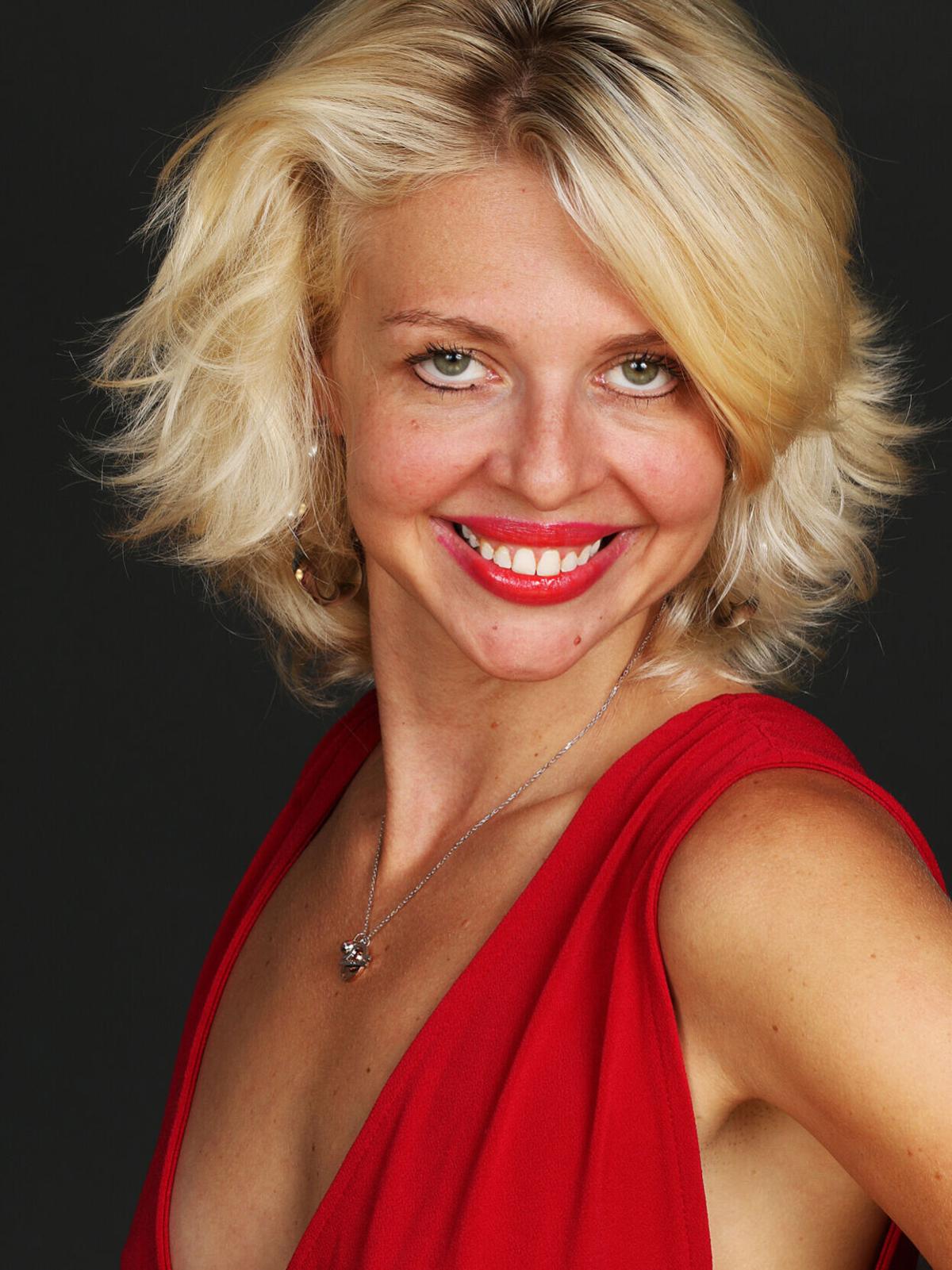 April Brucker has performed on numerous television shows and in live venues across the country. 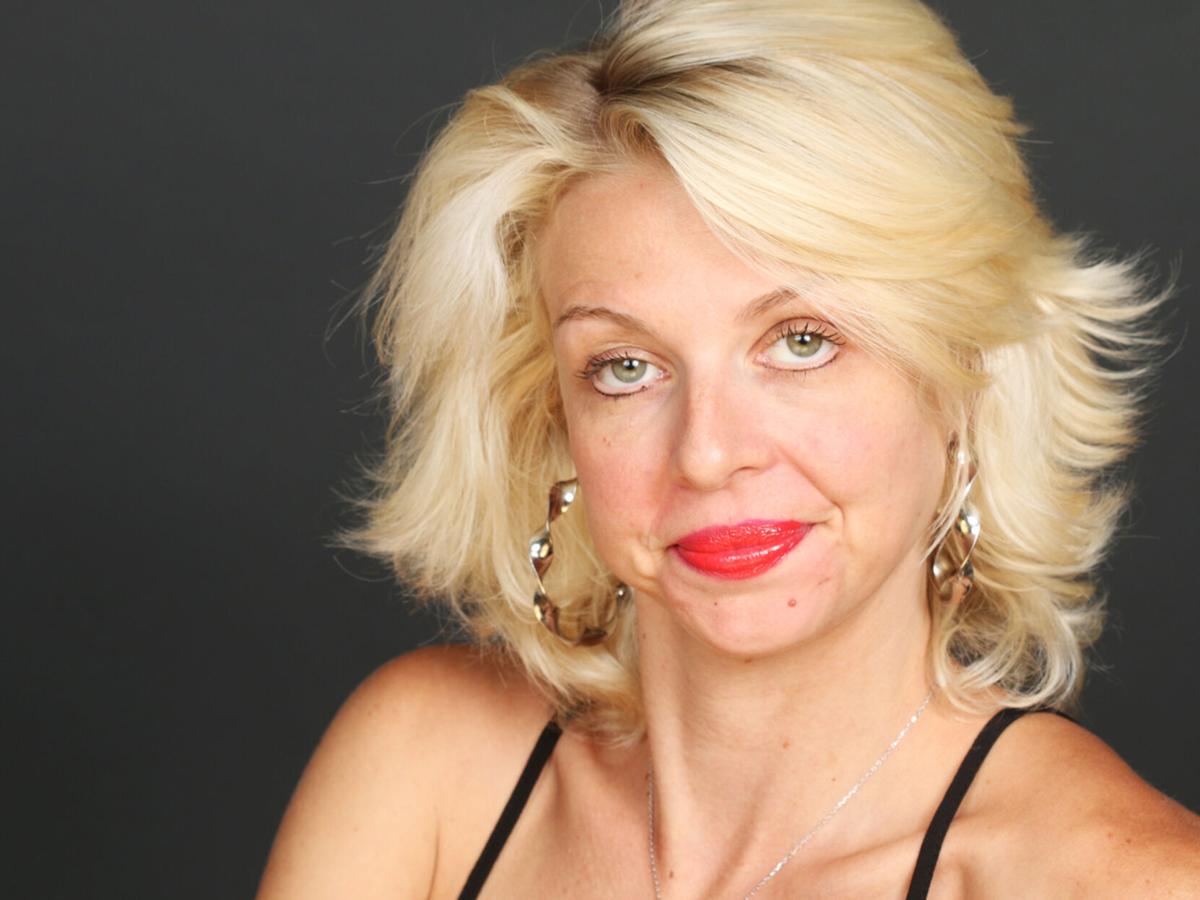 Another side of April 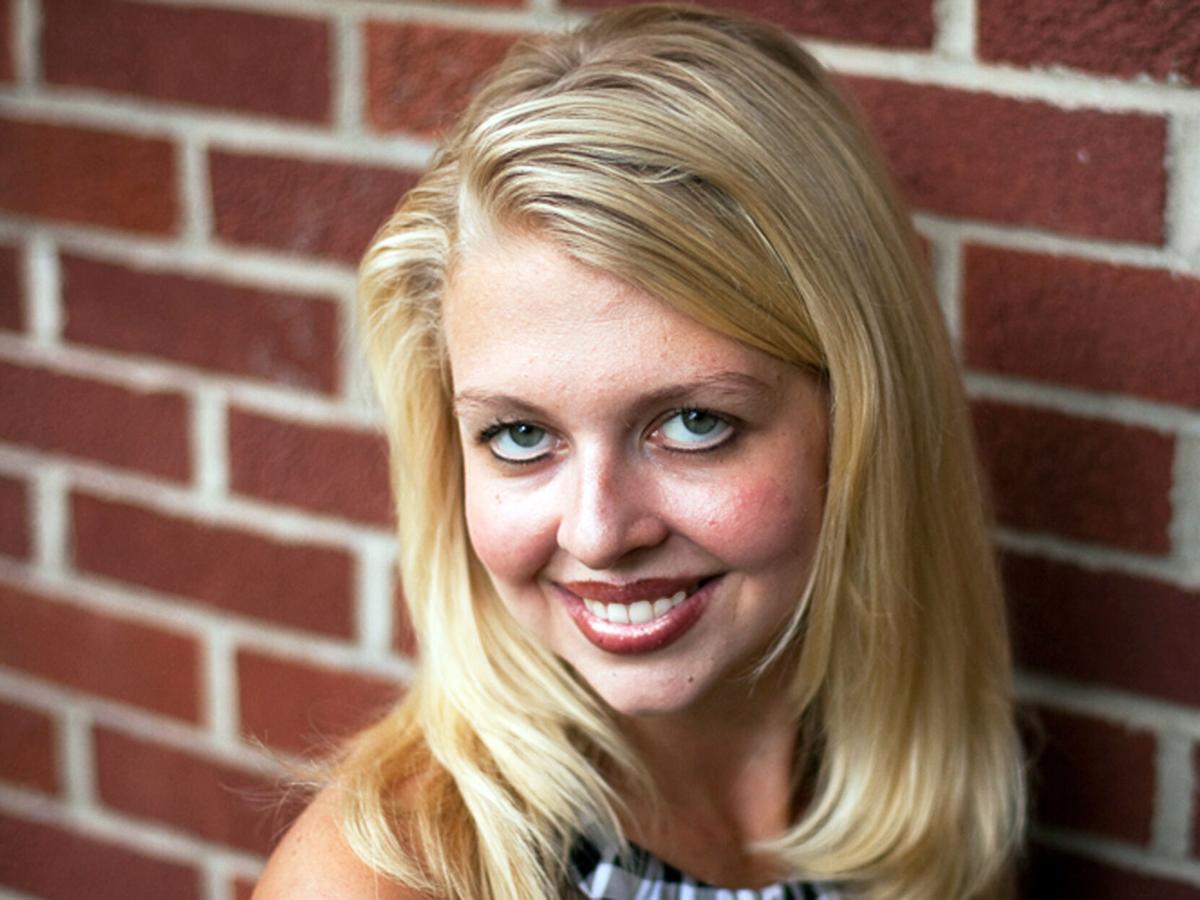 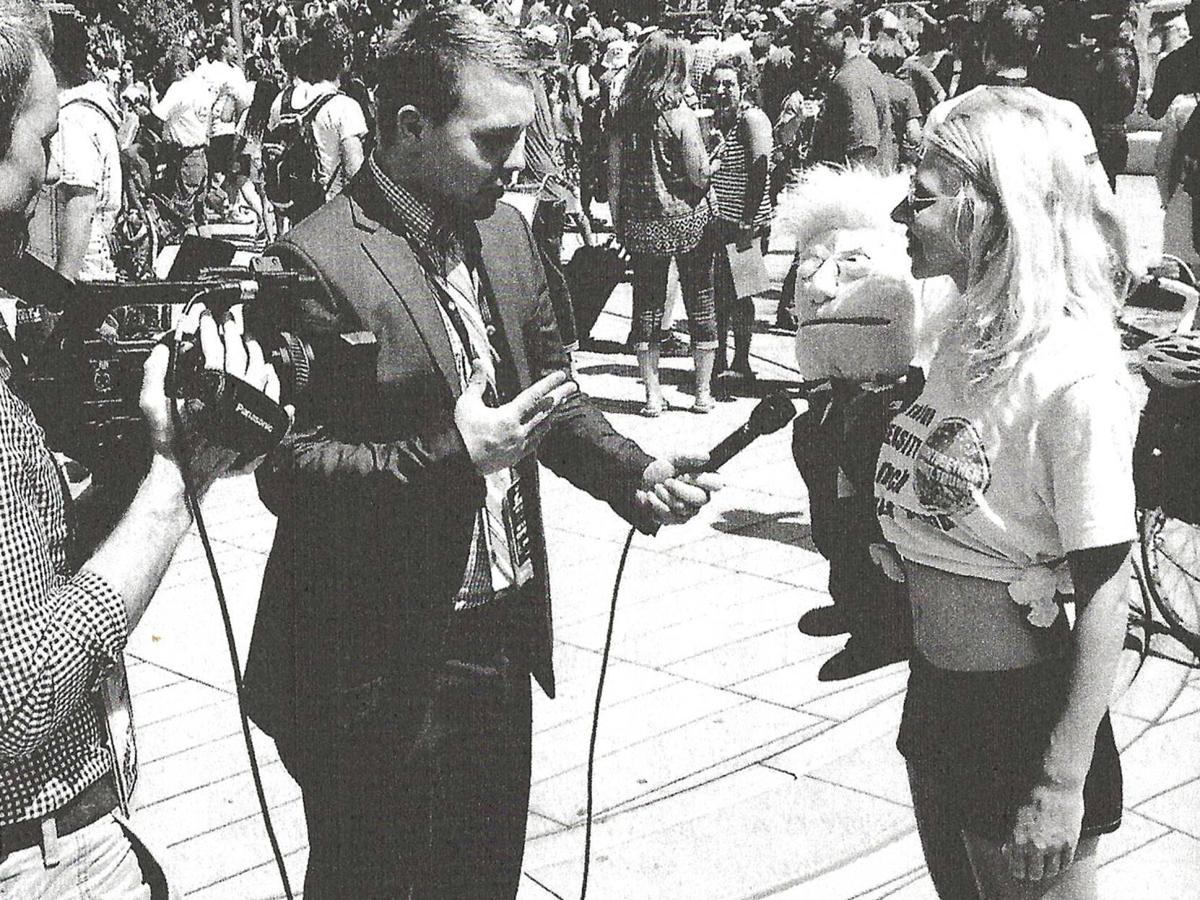 From the book: “Donald J. Tramp TV interview in Cleveland at 2016 GOP Convention” 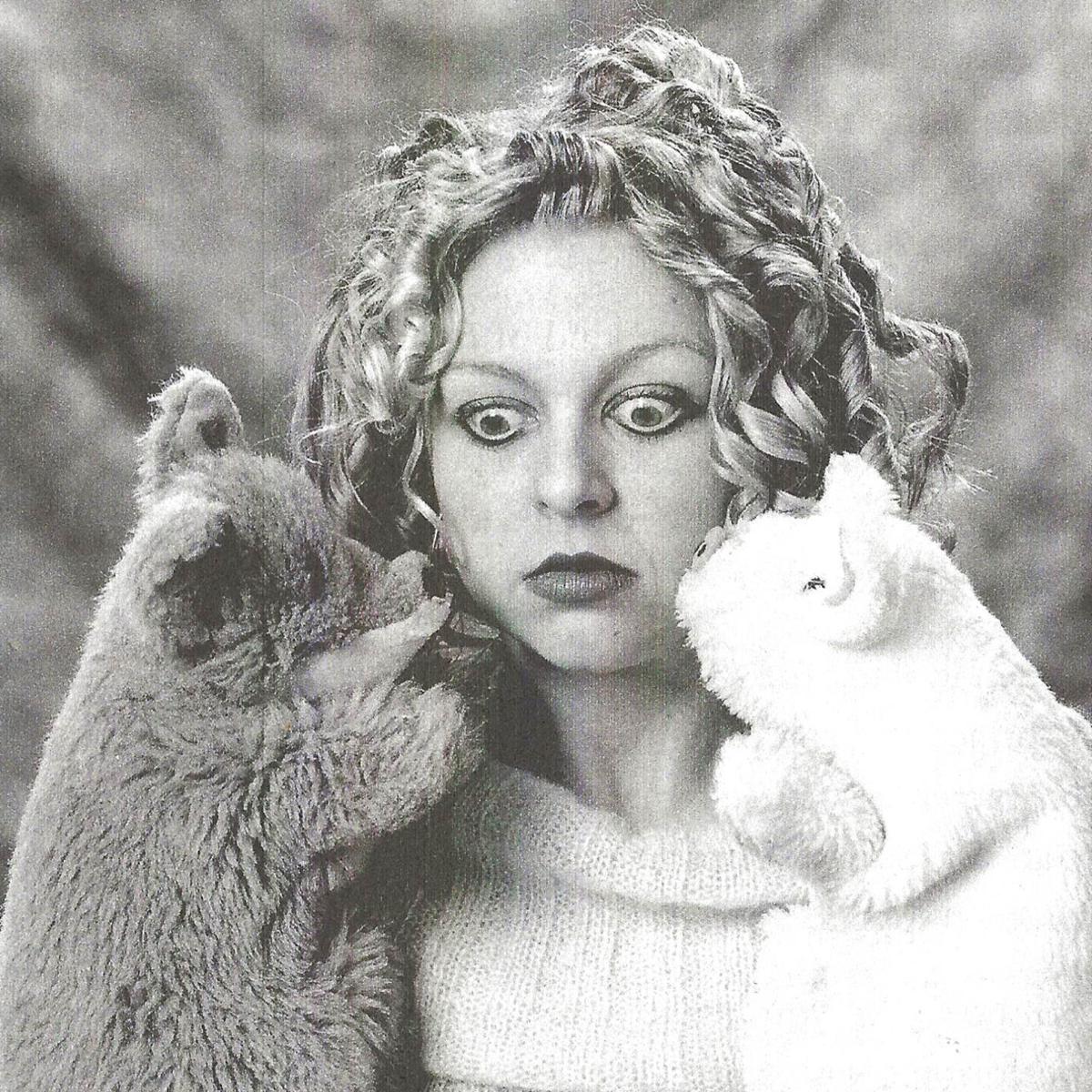 From the book: “Young April learning the art of vent!” 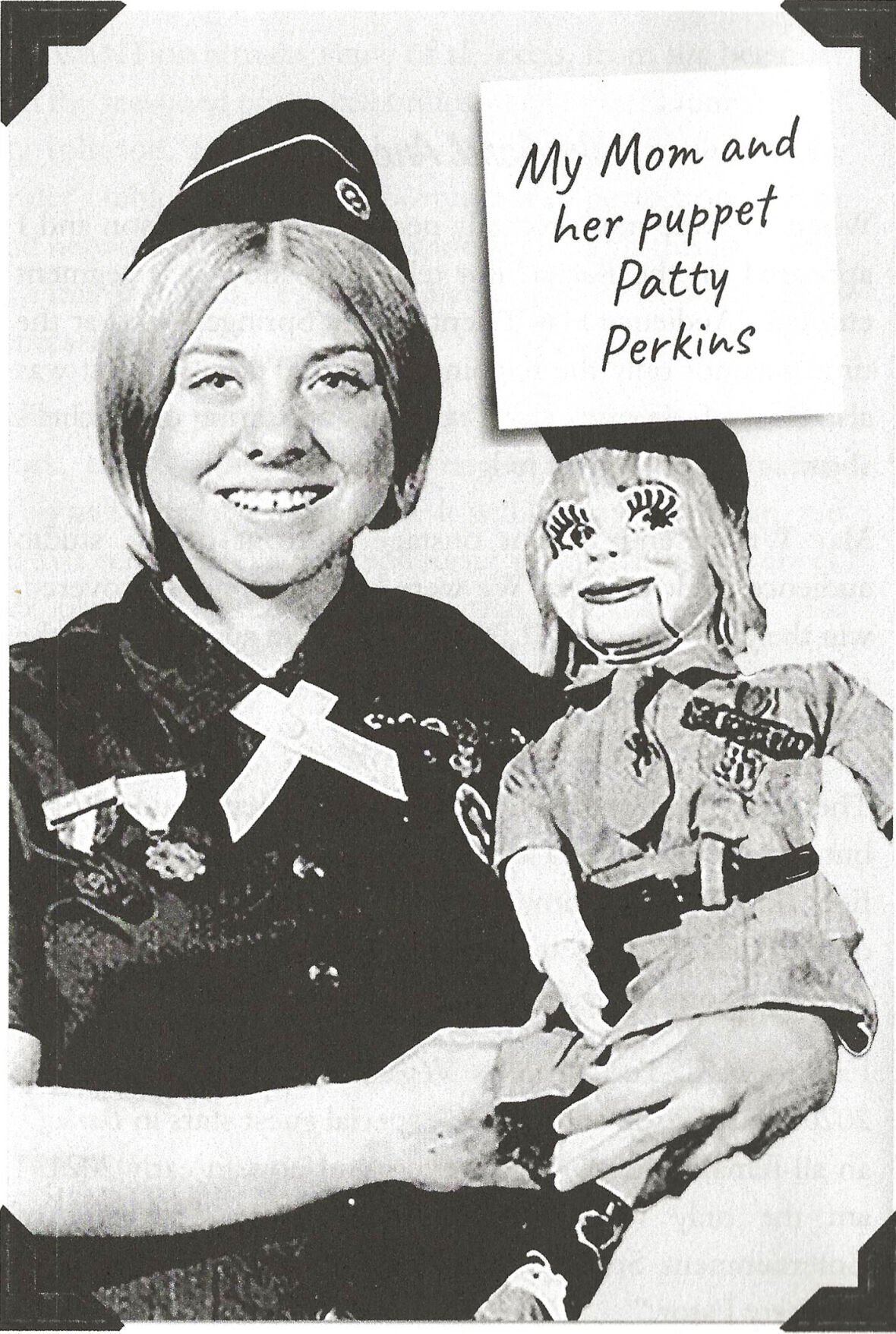 From the book: Anne Brucker paved the way for April by using a puppet to help teach about aquatic safety. And to tell ghost stories around the campfire. 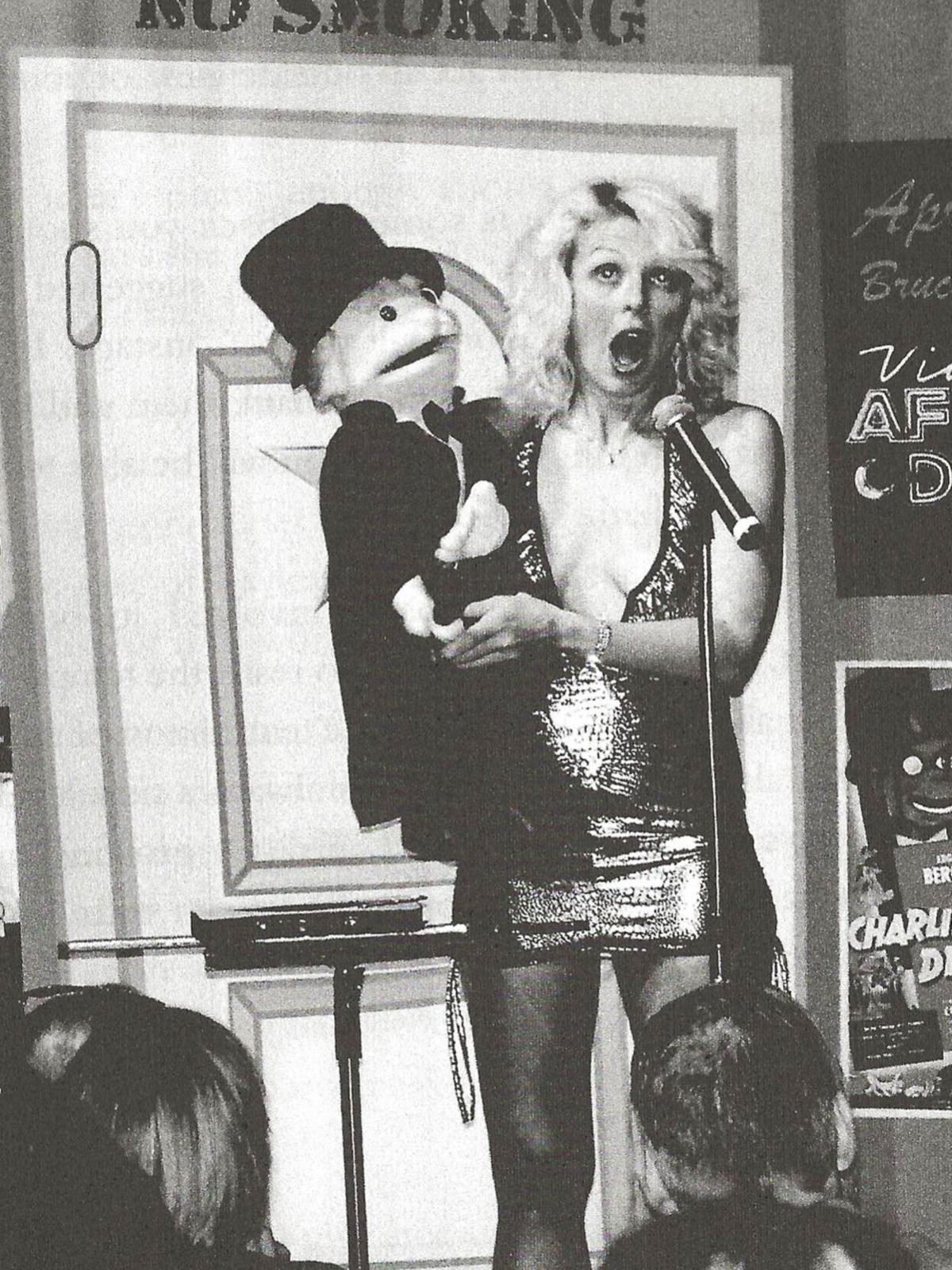 From the book: "My one-woman stage show in Las Vegas"

April Brucker with the irrepressible May Wilson

April and May crack up Harry from Las Vegas during the trio's Zoom call.

If you like to laugh, meet Bethel Park native April Brucker.

April Brucker has performed on numerous television shows and in live venues across the country.

Another side of April

From the book: “Donald J. Tramp TV interview in Cleveland at 2016 GOP Convention”

From the book: “Young April learning the art of vent!”

From the book: Anne Brucker paved the way for April by using a puppet to help teach about aquatic safety. And to tell ghost stories around the campfire.

From the book: "My one-woman stage show in Las Vegas"

Cleveland, July 2016: Ventriloquist April Brucker is performing with the puppet she calls Donald J. Tramp in a public square outside of the Republican National Convention.

When a man approaches with a heated question about former President Donald J. Trump, April starts to defend herself.

The Bethel Park native tells that whole particular story as “An April Anecdote” in her latest book, “Don’t Read My Lips!” And from a reader’s perspective, it would seem preposterous that someone would address an inanimate object instead of a human being.

In the guy’s defense in Cleveland, I think I kind of understand.

My latest conversation with April – I’d interviewed her over the phone a couple of times – occurs via the magic of Zoom, with her at home in Las Vegas and me right here in the South Hills.

We’re chatting about random Pittsburgh-type stuff, such as the local hockey team, before getting down to business. I ask her about May Wilson, the puppet that appears with April on the cover of “Read My Lips!”

Suddenly, a third party joins us.

May (in her best Valley Girl impression): “Hello! What’s up? I could hear that you were talking about me. Like, you were seriously talking about the Penguins.”

April: “Yeah, we were talking about the Penguins, May.”

April: “What are you saying, May?”

The exchange is so seamless and natural it doesn’t take me long to start thinking of May as, well, one of us.

So April tells me more about the book, which has the subtitle “American’s Foremost Female Ventriloquist Reveals the Secrets of How to Be a Successful Vent.” The upshot is that she decided to write it after her one-woman Vegas resident show, “April Unwrapped,” was 86’d by COVID-19.

May: “And so you know what happened? I did the hard work, and April put her name on it.”

April: “That’s not quite what happened, May. But OK. So that’s how we decided to write the book, and I wanted to start with the history, because I believe, in order to know where you’re going, you have to know where you come from.

May: “Excuse me. It’s Cloth-American.”

April: “In the book, I wanted to reiterate that I call my ‘Cloth-Americans’ my children.”

May: “And we call her Crazy Puppet Lady.”

April is that convincing.

But the business at hand is her book, which is both practical as a basic guide to ventriloquism and personal in getting to know one funny lady. For example, she pretty much begins by answering the question: How did you become a ventriloquist?

“It was a dark and stormy night in Bethel Park, PA.”

Her family was sitting around the television watching high school football scores, which was the reason that her father finally decided to relent and get cable in the first place.

“My dad hates commercials. But with cable, you can watch a million different things. So we turned to A&E, and they had an Edgar Bergen tribute,” she tells me, referencing Candice’s father and his act with Charlie McCarthy and Mortimer Snerd. “And then we all tried to talk like ventriloquists.”

May: “April was the only one who could do it.”

April: “So that Christmas, I got a Groucho Marx figure.”

Flash-forward a bit, and Bethel Park’s public-access BPTV is airing “Storytime With April and Friends,” the puppets. Since then, she’s built an impressive résumé of appearances on television, from TLC’s “My Strange Addiction” – she’s up to more than two dozen Cloth-Americans now – to just this month, MTV’s “What’s My Secret?”

As a live entertainer … well, the past year hasn’t gone exactly as planned.

“I’m doing these Zoom shows,” April reports, “and I live with two dogs and a parakeet. I can’t hear the audience, but every once in a while I get a bark from one of the dogs. And I get a sympathy chirp from the parakeet.”

Fortunately, she is appearing these days as special guest star of “BurlesQ,” an all-female revue at the Alexis Park Resort. And at the moment, that makes April the only ventriloquist performing in Las Vegas.

Another part of her act is something she calls “TJGL, the fun art of towel juggling”:

“Have you ever had an embarrassing towel drop, slip or whoops when the pizza delivery guy, room service or a blind date showed up at your door? Well, I’ve got the perfect solution for you!”

With that, she refers to the Official TJGL Juggling Towel “a great gag gift for bachelorette parties.”

Beyond the zaniness, April has proved herself academically by earning her bachelor’s degree in acting from the New York University Tisch School of the Arts and her master’s in creating writing and screenwriting from Antioch University Los Angeles.

Some of her experiences in New York City are recounted in her first book, “I Came, I Saw, I Sang: Memoirs of a Singing Telegram Delivery Girl,” and she also has written one called “April Unwrapped.”

“It’s sort of loosely based off the show I did in Vegas,” she explains. “Let’s just say that it’s based off a reoccurring nightmare I had, where I always ended up naked.”

“This book is not rated X,” its description states. “It’s not even rated R. It’s rated April!”

For all things April, and there’s a lot, visit www.aprilbrucker.tv.