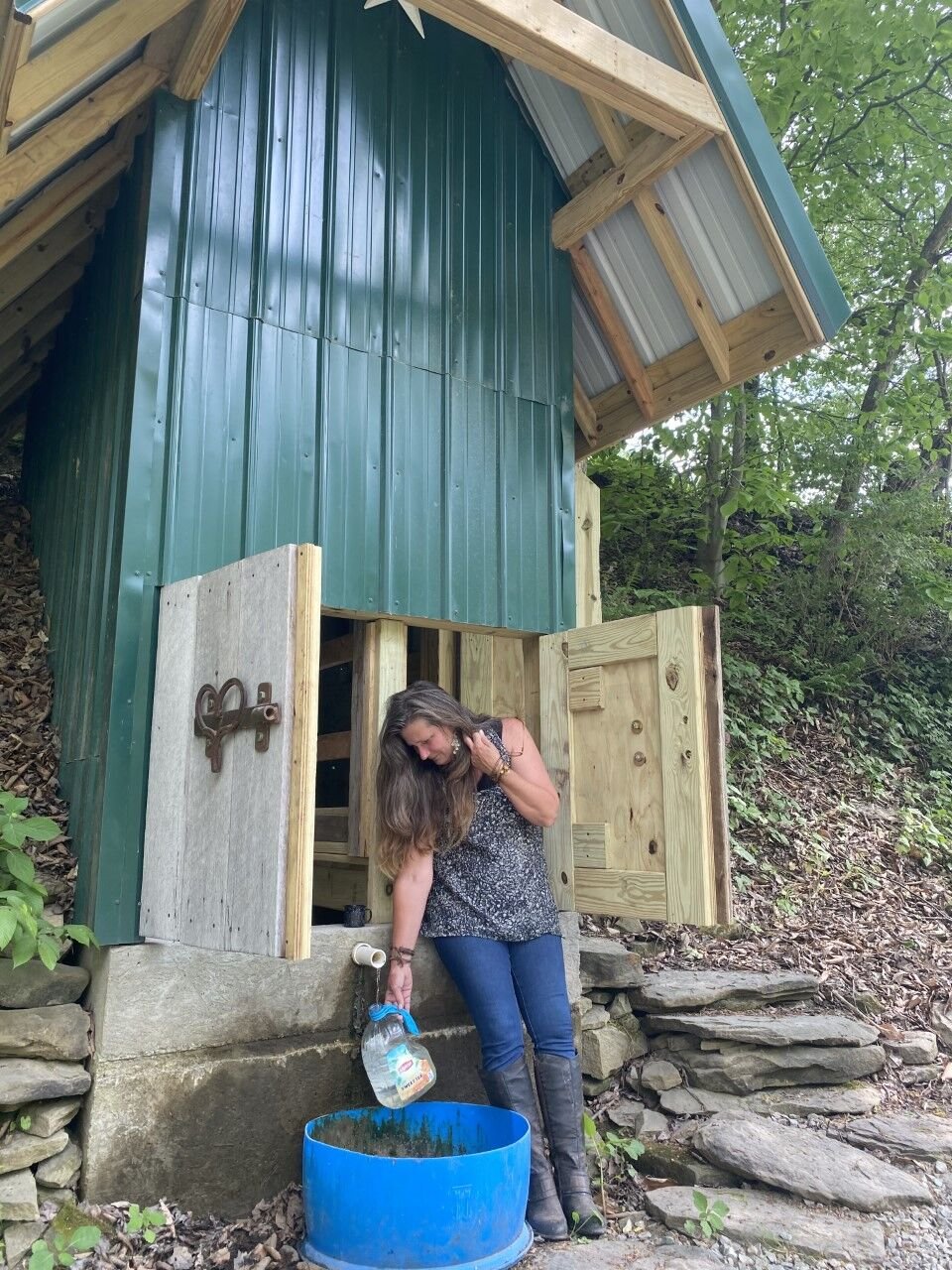 Tammy Hughes fills up a jug of water. 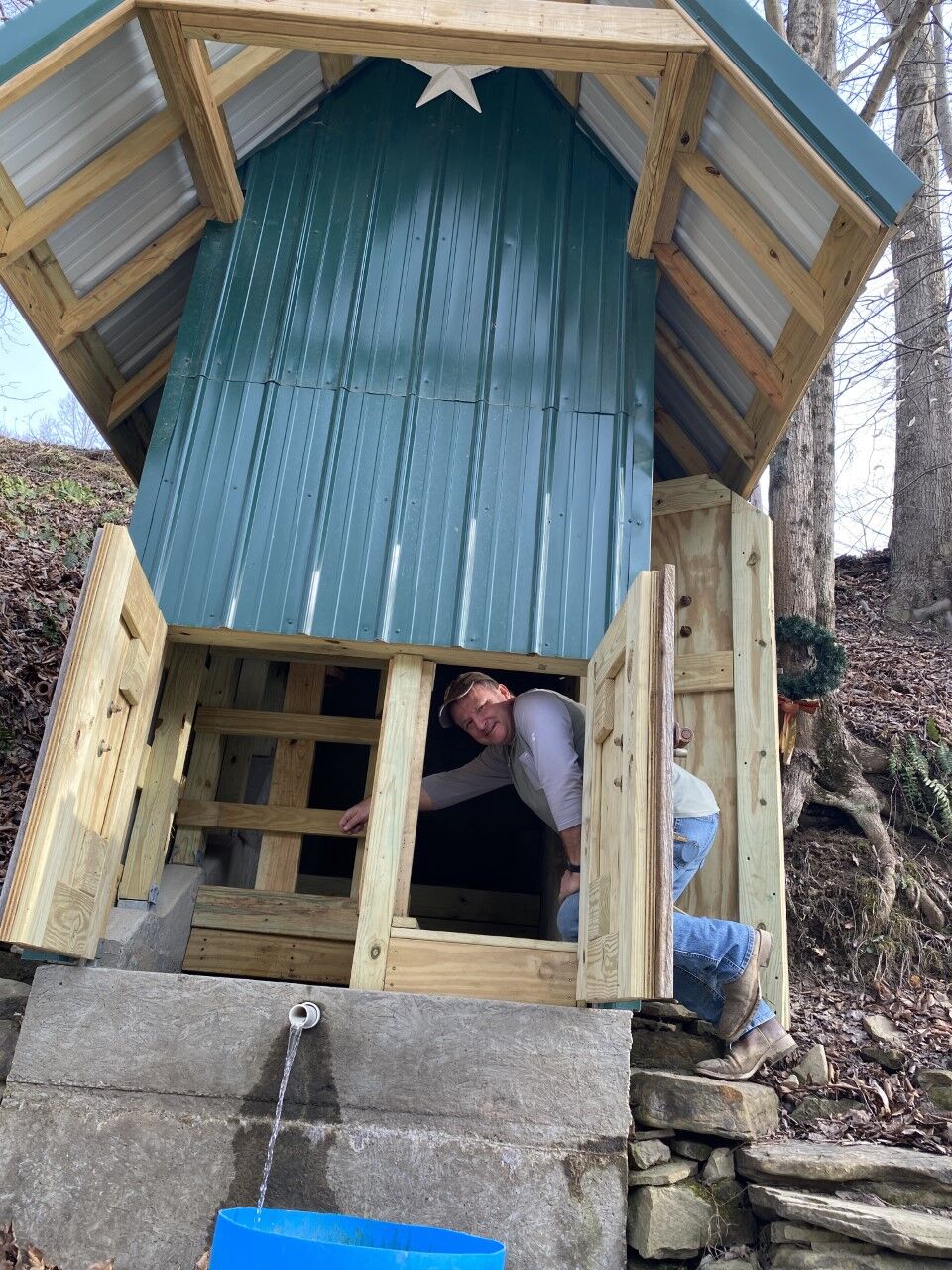 Adam Courtwright poses for a picture inside his spring house in Aleppo Township. 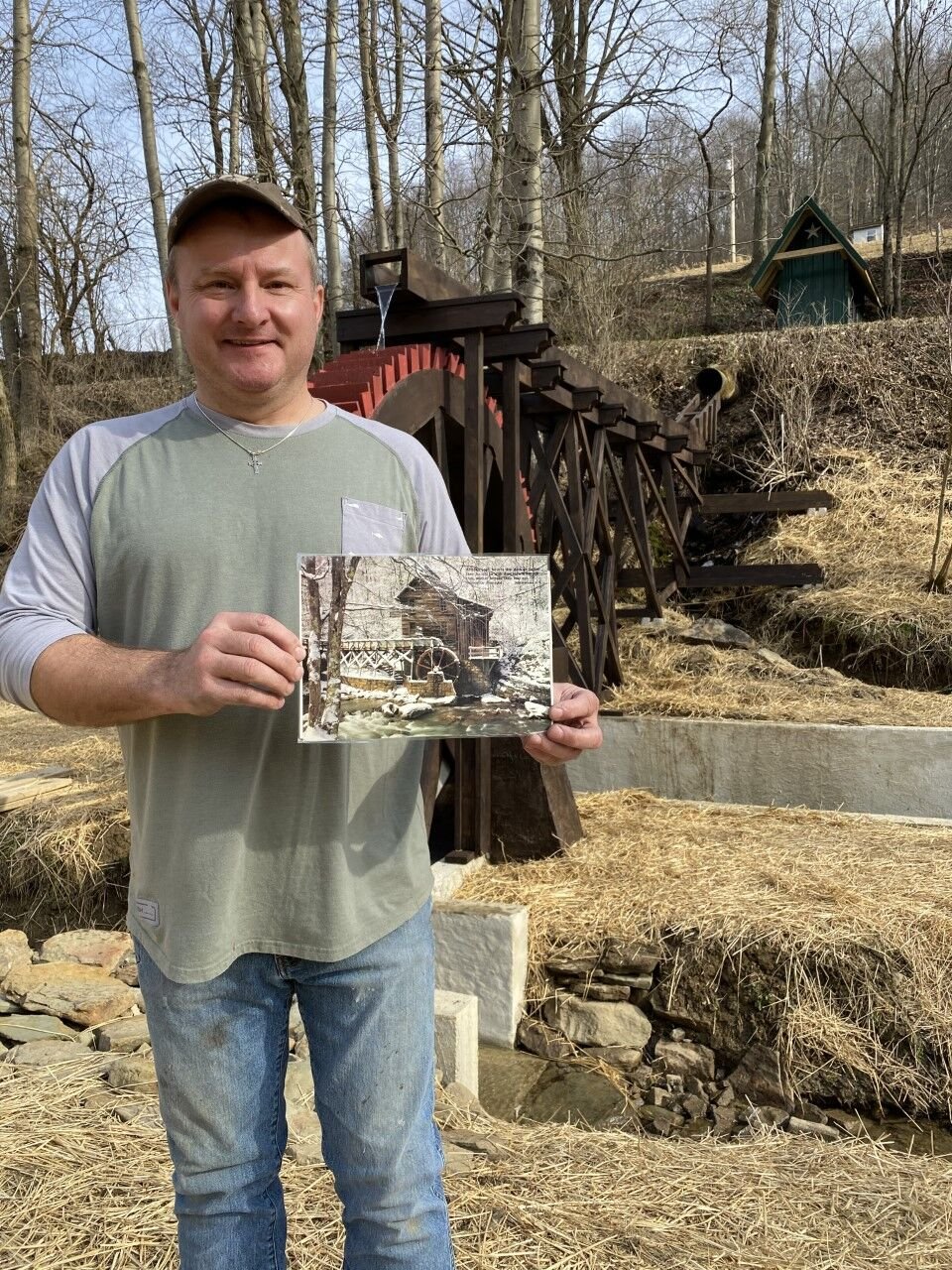 Adam Courtwright shows off the inspiration for the water wheel he constructed in Aleppo Township. 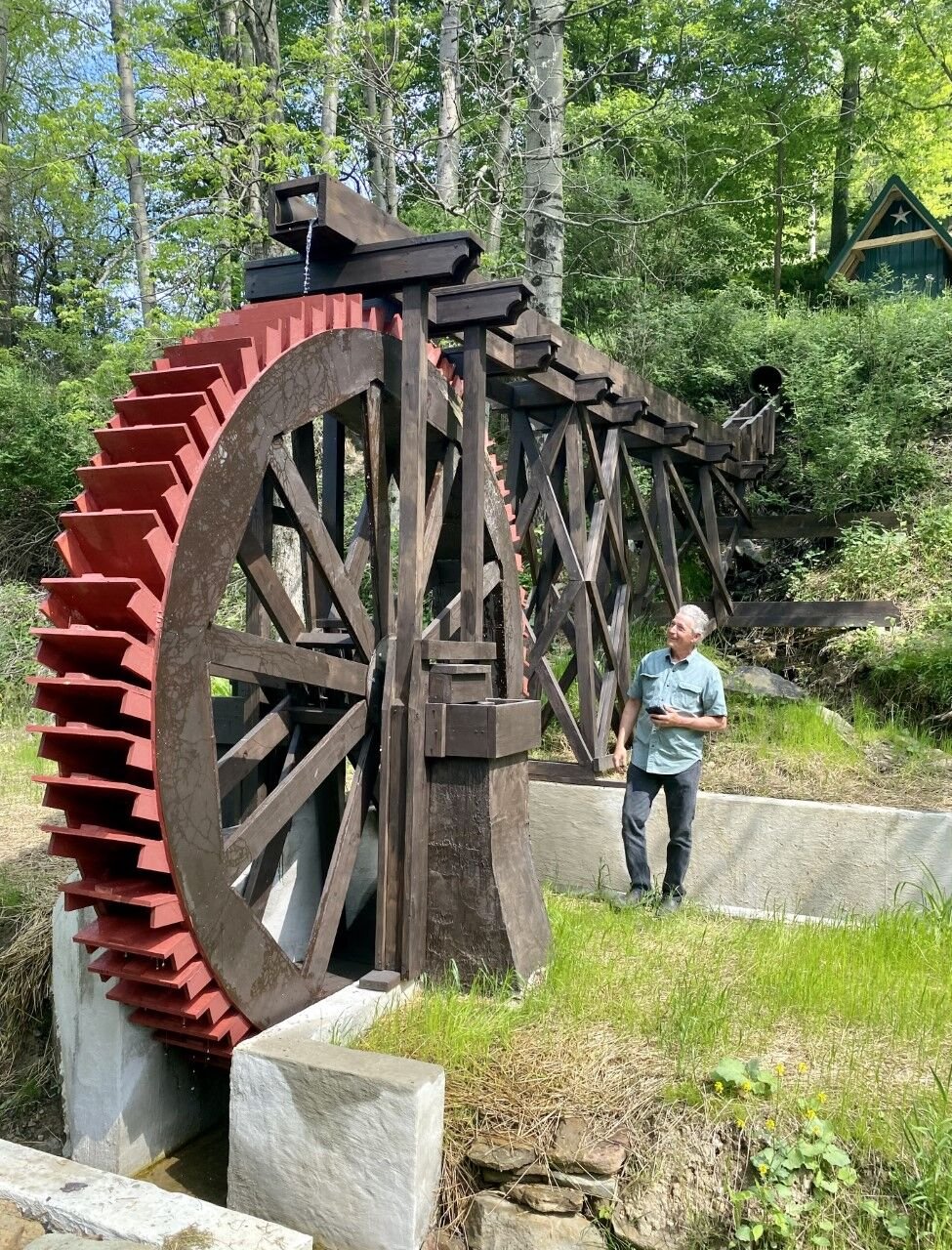 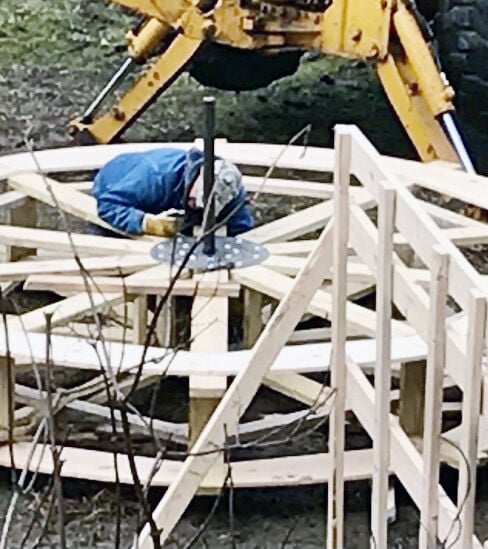 Adam Courtwright works on the shaft of the water wheel he created on his property in Aleppo Township. 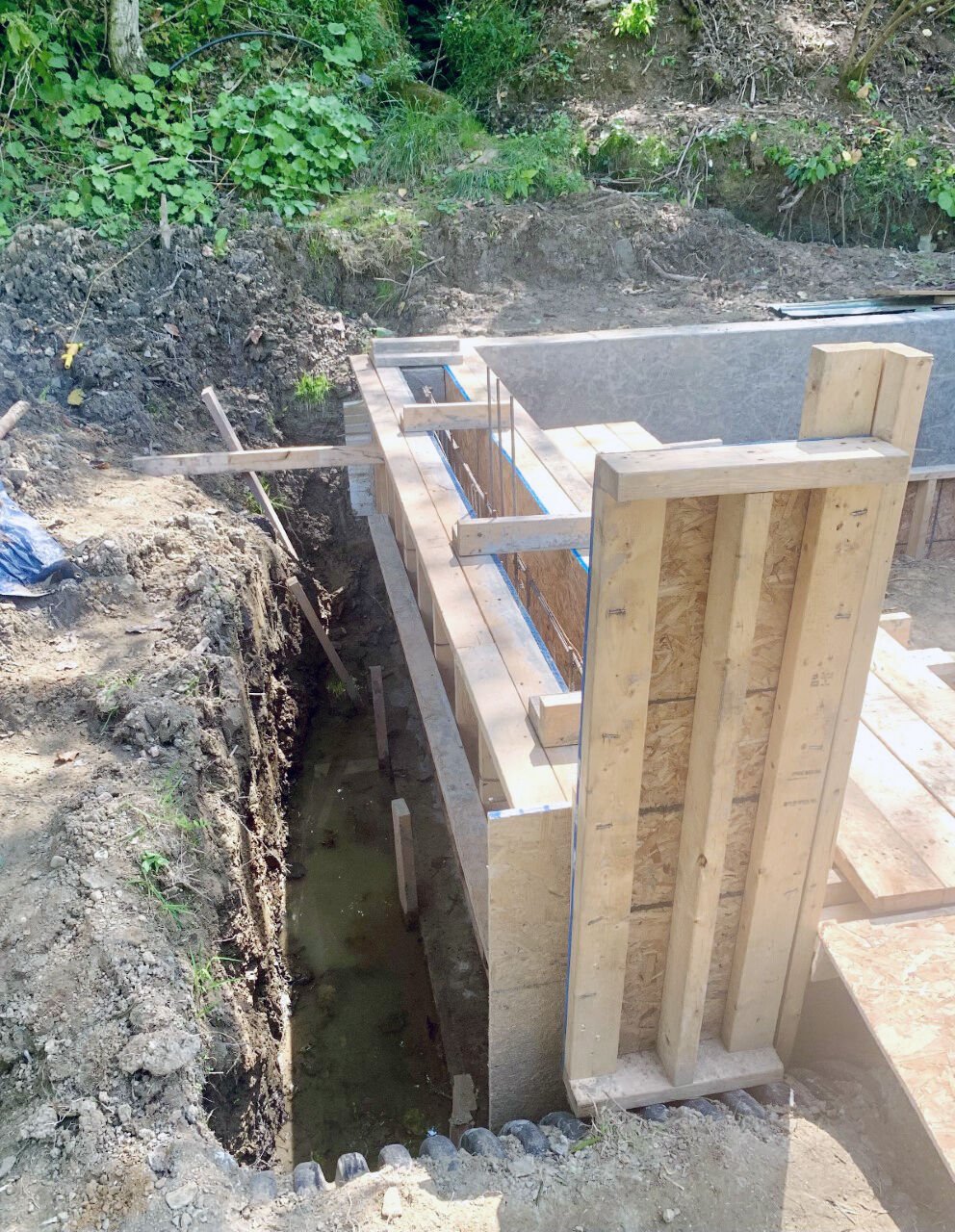 Adam Courtwright built the foundation for his Aleppo Township water wheel during the coronavirus pandemic lockdown in 2020. 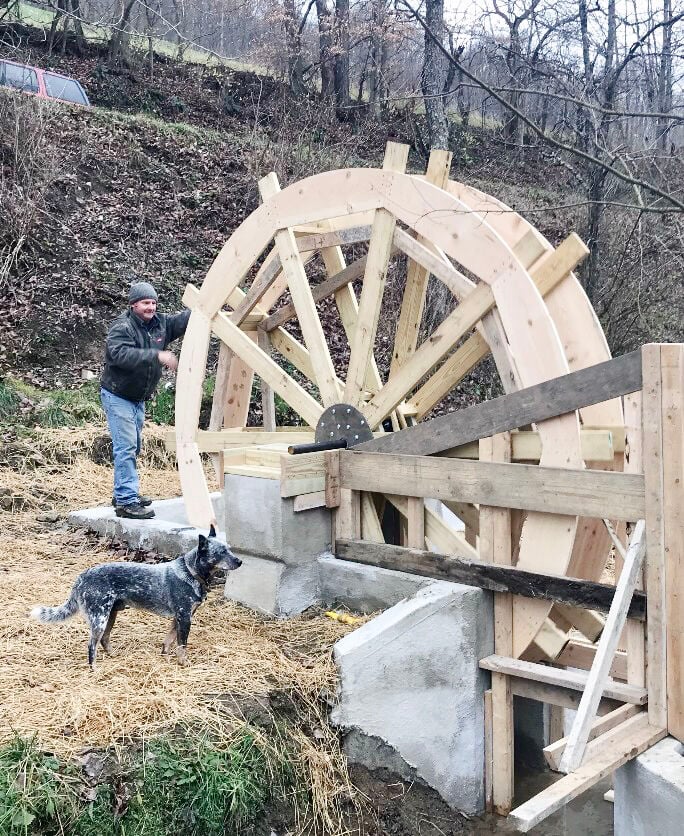 Adam Courtwright works on the water wheel on his Aleppo Township property.

Tammy Hughes fills up a jug of water.

Adam Courtwright poses for a picture inside his spring house in Aleppo Township.

Adam Courtwright shows off the inspiration for the water wheel he constructed in Aleppo Township.

Adam Courtwright works on the shaft of the water wheel he created on his property in Aleppo Township.

Adam Courtwright built the foundation for his Aleppo Township water wheel during the coronavirus pandemic lockdown in 2020.

Adam Courtwright works on the water wheel on his Aleppo Township property.

The springhouse Adam Courtwright built on Martin Road, Aleppo Township, in 2019 is postcard perfect, from its neatly finished trim to the horseshoe latch that decorates the door.

But even more dramatic – and photo worthy – is what sits below the road.

Courtwright and his brothers built from scratch during the pandemic year of 2020 a beautifully assembled, classic wooden water wheel that harnesses the power of a spring that never runs dry.

The inspiration for the wheel came while restoring the spring and feeling its force, Courtwright said. Neighbors had been coming to the spring for water when droughts would happen for as long as anyone can remember. An Alliance water consultant, who stopped to admire the wheel as it was being built, clocked the spring as producing 130,000 gallons per day. Its flow is channeled to go under the road and into the creek 50 some feet below, but in 2019, the century-old workmanship that first established the spring was silting in and water also flowed down the edge of the dirt road, eating it away.

“It was a mess,” Courtwright said. “I had to go into the hill and clear the head of the spring before I could build.”

It was a lot of heavy lifting but Courtwright, a spiritual man, said it never felt like work.

“Something about the water filled me with joy,” he said.

Using the skills of a union steamfitter and all-around country wood worker, Courtwright took his time and made it right.

When finished, the sprightly green gabled building with water trickling into its blue plastic tub became an instant landmark. Its 300-gallon holding tank and filtration system allowed neighbors to fill their jugs, not just for themselves, but for their livestock when the creeks run dry.

Inspiration for the next project came when “my sister Millie showed me a picture of an old mill from a calendar and said ‘why don’t you build something like this?’ I knew I wanted it to look old fashioned,” Courtwright said. “I decided to work with wood.”

The timing was perfect.

The COVID-19 pandemic had slowed the economy and Courtwright was laid off. He said he had plenty of time, but not a lot of money, to put into the project of his dreams.

“I priced them on the internet, but the one I wanted cost $30,000,” Courtwright said. “So I decided to build it myself. I went online and looked up water wheels and found Fitz Water Works Company. They’ve been building them since the 1800s. If you go online there and look at the book on their site you can see how it’s done.”

It would become an extended family project, with Courtwright’s brothers Wilbur, Dean, Fred and Jacob – and sometimes neighbors – stopping by to lend a hand, bring over equipment and help with the cement pour.

Courtwright said it took him awhile to get the metal shaft that turns the wheel just right. For the circumference, he said he used a board and a nail to create a compass, “like the kind you use in school.”

In factoring size for the power he hoped to extract from the spring, he used math divided by how much money he had to spend, he said.

Photographs that were taken throughout the building process capture the seasons of 2020, along with enough Mother Earth News “do it yourself” detail to inspire others with the know how – and the water – to consider taking on a project like this themselves.

There were forms to be built for the concrete walls and wood to be bought for the wheel. The foundation was designed to avoid affecting the stream flow to protect the minnows that swim there.

After months of on-and-off construction, the finished wheel was cribbed into place and the water chute supported by railroad trestle style wooden legs bridged the slope where the water flowed from under the road.

The wheel was ready to turn as 2021 came rolling in.

Courtwright estimates he has about $1,200 in materials invested in the project, along with a lot of family and friends’ sweat equity for which to give thanks.

From the edge of the stream, the wheel towers up to meet the overshot chute to catch the water that drives it, a never-ending carousel of potential energy to go.

Randy Hughes, a pipeliner from Tennessee who is working on transmission lines locally, came by with his wife Tammy on his one day off to admire it, then came back another Sunday to learn more. The Hughes will be heading home after pipelining season is over, ready to start work on a wheel fed by the power of the mountain stream running through their own back yard.

Converting the energy generated by the wheel into electricity is the next step and there’s more than one option, Courtwright said. He is debating between a simple battery set up with DC current or something more elaborate.

There are no plans to feed into the power grid or use the electricity for the house just yet.

Courtwright gestured to the flat, grassy backyard, stretching along the edge of the creek that carries spring water to Wheeling Creek and then on through the panhandle of West Virginia to the Ohio River.

“I’d like to put in a pole with a big outdoor light so I can work outside in the evening over there by my shop,” he said.

“Oh, and maybe play some horseshoes.”