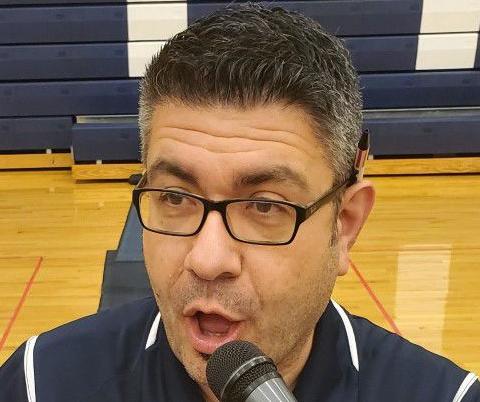 In this The Vogues promo poster, pictured are, from left, Bo Wagner, Troy Elich and Royce Taylor.

The Vogues, from left, Bo Wagner, Troy Elich and Royce Taylor, are pictured during a performance.

In this The Vogues promo poster, pictured are, from left, Bo Wagner, Troy Elich and Royce Taylor.

The Vogues, from left, Bo Wagner, Troy Elich and Royce Taylor, are pictured during a performance.

The bags were packed and they were ready to go.

The house hunting had already begun and the dreams of living in sunny California while chasing the opportunity of a lifetime seemed unimaginable at first to Troy Elich.

But he was ready to try.

He colored his hair, ridding himself of a few gray strands that began to pop up. He whitened his teeth because, well, didn’t the stars in Hollywood have the most beautiful teeth?

He had already begun losing weight because the cameras always put on 10 pounds, or so they say.

This was his big break, an opportunity to become possibly the next generation’s best comedian, someone like George Carlin or maybe Steve Martin. Elich was musically inclined, just like Steve Martin, who’s banjo riffs we’re so blended into his routine.

Or maybe, as his agent told him, Elich could carve an acting career if he were talented enough and worked hard enough in his upcoming acting classes.

He knew what he had in Burgettstown, a small, knock-around place that offered him a simple and pressure-free life.

Mention his name around town – in fact, all you needed to say was, “Troy” – and most people would know who you were talking about.

Sure, it would be hard to leave their friends but his wife, Jaclyn, and children, Sammy and Abby, were OK with leaving. Maybe they envisioned their father becoming a big star, or maybe even getting a star on the walk of fame someday.

Or maybe it was something more simple, not having to shovel snow anymore, or having an entire ocean to play in for most of the year. That was all right with them.

Big breaks rarely come in this business. Just ask the tens of thousands who have had their dreams crushed in Hollywood.

Troy was in his 40s now, young at heart, but considered old for the glamorous style of California. An opportunity like this probably would never come again so this would be his turn to grab on, shake the tree and see what falls off.

There was this small flame in the pit of his stomach, growing larger as the day to leave approached. By the time the suitcases were packed, it had burst into forest fire strength.

And Troy knew he had to face the truth.

“I finally realized, and I’m not sure I ever told my wife this, but I just couldn’t imagine myself not going to Burgettstown football games on a Friday night,” said Elich. “That’s really screwed up. Isn’t it? They pay me $30 a night to announce these games. I was passing up a chance to work in Hollywood.

Elich graduated from Burgettstown High School in 1994 and spent some time in college. A good athlete, he toyed with the idea of sports, but his real love was with music and that’s why he abandoned athletics.

He even considered becoming an air-traffic controller and possibly an airplane pilot. But, again, the pull of music was too much.

“My earliest memories where of being in a band,” said Elich. “So when I had the opportunity to join the Vogues, I was there.”

Troy‘s father, Stanley, got the whole process started. Stanley was a church singer early on and was in a band called, “Black Velvet.” During a local show of mid-level bands, Stanley made an impression on the members of the Vogues. When an opening occurred, the Vogues finally made the connection with Stanley and he became part of the band. Later, Stanley bought the franchise and brought in his son.

“He had his first album of church songs at 13 or 14,” said Troy. “He would play six or seven days a week. He played at this night club in Weirton called, “The Blast.” He would sing from 10 to 2 and then come home and sleep for a few hours, then get up and go to work at Weirton Steel. He was making $100 a night in the 70s, which was a lot of money back then.”

Stanley wowed his neighbors with some of the newer technology he bought in the 1970s.

“We had a garage door opener,” said Troy. “And the neighbors were amazed. They’d say, ‘So you press this button and the door goes up? When it’s snowing or raining, you don’t have to get out of your car to open the garage door.’ We had one of the first VCRs and it must’ve weighed 150 pounds and you could only record an hour on it. You could be out and still record “Dallas?” Amazing.”

Troy always knew he wanted a career in music. His family caught onto this at an early age.

“I would sit in my living room playing records,” Troy said. “I would sit on the recliner backwards, facing the back rest, and that would be my drum set. And I would have these two wooden spoons, which I turned upside down and those would be my drumsticks. I would play the music and pretend I was at the Civic Arena in front of 20,000 people.”

Troy never played in front of 20,000 people at the Civic Arena. He did have gigs at Burgettstown’s renowned music venue, which was then called Star Lake, and the Benedum Center in Pittsburgh. Now, as lead singer in the Vogues, Elich performs in front of 20,000 or more fans, just not at one time. His latest tour has 64 stops in 84 days.

‘I have a referee shirt’Like many young kids, Elich had a great passion for pro wrestling.

He watched all the shows and became a big fan of Jimmy “Superfly” Snuka, even had one of his dolls as a kid.

“I always wanted to get into the business,” Elich said, “but I didn’t know how.”

In the early 1990s, a show came to Burgettstown High School. One of the wrestlers on the card was Rob Mazzie, a Washington High School graduate.

“They were signing autographs afterwards and I went up to Rob and asked him how I could get into this,” Elich recalled. “At the time, I was 140 pounds and Rob told me I would have to bulk up by eating carbs and lifting weights. So I thought to heck with that.”

Still, Elich remained friends with Mazzie and would call him up for tickets. Elich often found himself sitting in the front row for World Wrestling Federation shows then being able to go home and watch the replay on TV with him in plain sight.

“Then Rob started running shows and I would go and do little things for him, like keeping the time and running the ring coats back to the locker room,” said Elich. “At one of them, Rob came up to me and said, ‘The referee bailed on us, so can you do this?’ Can I do this? I’ve been waiting all my life for this. I told him I have a referee shirt because I refereed parochial basketball leagues. You didn’t have to be certified for that, so I had the shirt and black pants.”

At one particular show at Robert Morris University, they put on a wrestling-boxing extravaganza. The wrestling went on at 7 p.m. for an hour, then the boxing was supposed to follow. After the wrestling show, Elich found out the boxing referee had still not shown up.

“I think at the time you had to be certified by the state boxing commission to be a referee,” Elich said. “For wrestling, any clown like me could do it. So the promoter came up to me and said, ‘Can you referee the boxing matches?’ And I looked at him like he had steam coming out of his eyeballs. I asked him if I would know who was going to win ahead of time and he said no. Then I said I can’t.

“Luckily, the boxing referee burst in right then. I was so relieved.”

Elich got his start as a public address announcer like many people do: he was asked to do something else that eventually led to it.

“The year after I graduated, the 1994-95 school year, I knew everybody up in the booth,” said Elich. “Woody Alvarez, who was Barry Alvarez‘s brother, was doing the announcing at the time. I was standing around the concession stand for the first game and he came up to me and asked if I wanted to spot for them. So I said “yes,” and I did that for the next three years.”

The spotter’s duty, among other things, is to tell the PA announcer where the football is, who had it for the offense and who made the tackle.

“Then somebody quit, and I got to be the scoreboard operator, which meant you got to sit down during games,” said Elich. “A spotter has to stand. So I was working my way up the ladder. Then Woody quit in the mid-2000s and Dave Barto took over for about four years before he quit to have more time to watch his grandchildren play sports. So, then I moved into the seat.”

That also meant basketball and even volleyball.

Elich doesn’t remember the first game, when it was or who it was against. But he did find announcing could have its downside, especially when it came to names.

“I remember calling Jake Lounder by his brother’s name, Ryan Lounder,” Elich said. “It was brutal. Jake Lounder is only the most successful quarterback in the history of the school, or at least the last 40 years, and I kept calling him Ryan. I did it again this year in the first game, giving Ryan credit for Jake’s touchdown.”

Elich didn’t have to worry about catching his mistakes. He had an entire football stadium full of Burgettstown fans to help him out.

“Sometimes, someone in the box will catch it,” Elich said. “Or I’ll get like 10 texts on my phone. Even Ryan texted me, thanking me for crediting him for that touchdown even though he graduated two years ago.”

Sometimes, a mistake pops up when you least expect it. Each year, Burgettstown hands out an Iron Man award for football and it’s announced during the game.

“So this one time, I am like Ted Baxter on the Mary Tyler Moore show that day. I just read what they put in front of me,” said Elich. “I didn’t even read it before hand, which I should have. Unfortunately, the year wasn’t changed on the paper.

When you ask Elich about what he thinks he will be doing in the future, it doesn’t take him very long to answer.