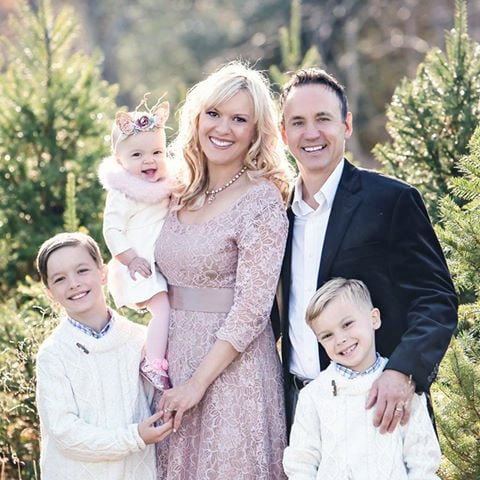 Courtesy of Eugenia B. Photography 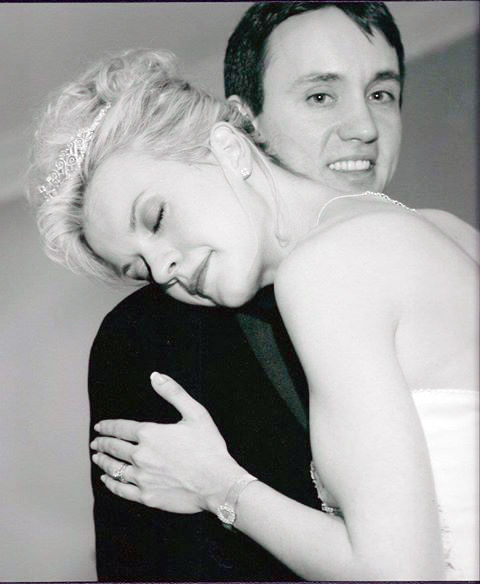 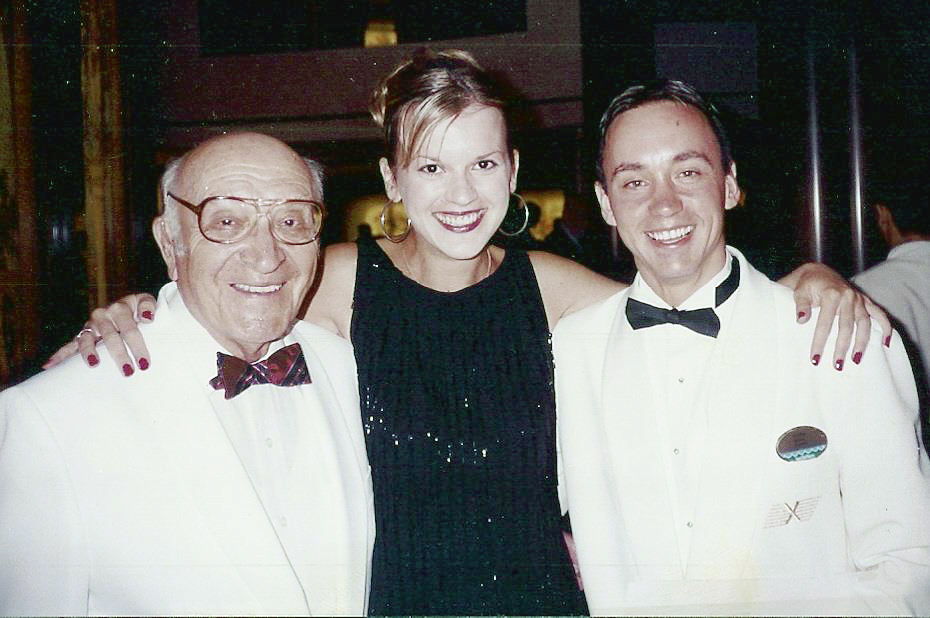 Sara Botkin, 23, and her late grandfather, Gay Banes, 84, pose with Ovi Manciu, a waiter on their Caribbean cruise in 2000. Sara and Ovi married a year later and now live in Peters Township. 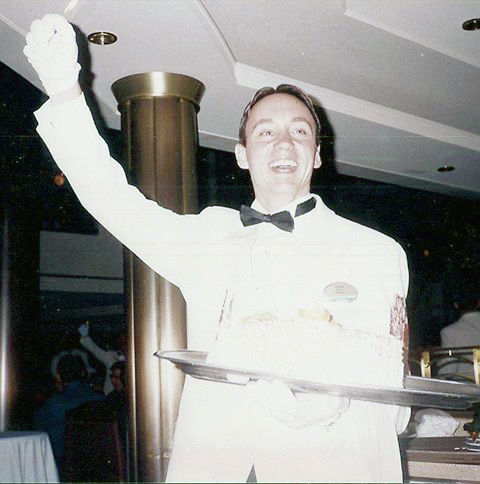 Ovi Manciu was a waiter on a Caribbean cruise in 2000 when he met Sara Botkin. They were married a year later and now live in Peters Township. 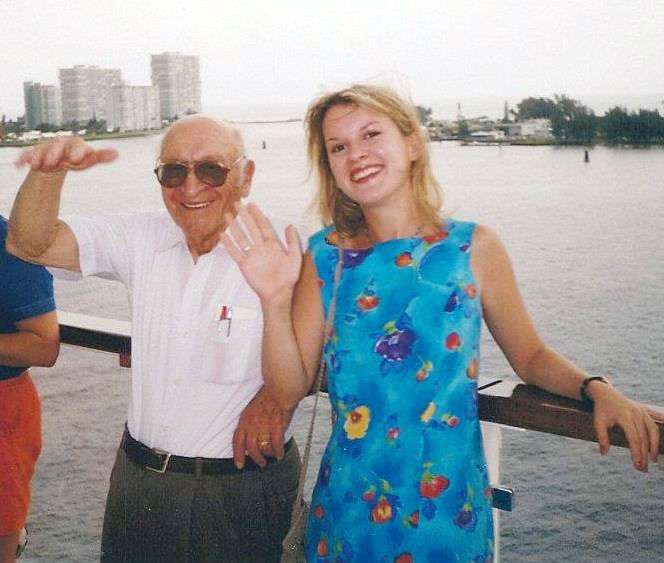 Sara Botkin, 23, and her late grandfather, Gay Banes, 84, wave as they set off from Fort Lauderdale on a Caribbean cruise in 2000. 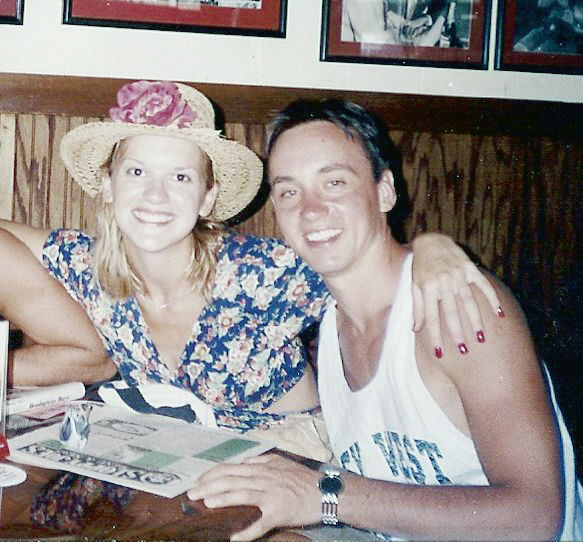 Sara Botkin and Ovi Manciu enjoy their second date on a Caribbean cruise in 2000.

Courtesy of Eugenia B. Photography

Sara Botkin, 23, and her late grandfather, Gay Banes, 84, pose with Ovi Manciu, a waiter on their Caribbean cruise in 2000. Sara and Ovi married a year later and now live in Peters Township.

Ovi Manciu was a waiter on a Caribbean cruise in 2000 when he met Sara Botkin. They were married a year later and now live in Peters Township.

Sara Botkin, 23, and her late grandfather, Gay Banes, 84, wave as they set off from Fort Lauderdale on a Caribbean cruise in 2000.

Sara Botkin and Ovi Manciu enjoy their second date on a Caribbean cruise in 2000.

A 23-year-old Sara Botkin knew she wasn’t embarking on an ordinary Caribbean cruise. It was the beginning of a new millennium, and her travel partner and wingman was her 84-year-old grandfather. She certainly didn’t know the vacation would lead to “happily ever after.”

Sara had never been on a cruise, but she heard how much fun her friends had on one. She had trouble finding someone to go with her, so she asked her grandpa, Gay Banes.

“He said, ‘All right, all right,’” Sara said. “He was always an adventurous person. I just knew he’d be fun to travel with.”

He lived in Pittsburgh, and she lived in New York City, where she was pursuing a singing career. They met up in Fort Lauderdale and set sail on “The Century” Sept. 16, 2000. A party was held the first night, with a dinner at 6 p.m.

“I was a waiter, and Sara and her grandfather were assigned to my table,” said Ovi Manciu.

He was born and raised in Romania, but after college he wanted to “see the world,” he said. He took a job working on the cruise ship and had held the position for five years when he met Sara.

“That first night she came was a Saturday night, and those are the craziest nights for us,” Ovi said. “So it was like running like a chicken without the head, with people coming in and not knowing their tables.”

Ovi remembers that Sara and her grandfather were seated at table 508. Her grandfather, whose parents were from Hungary, started making conversation with Ovi. He saw Ovi’s name tag said that he was from Romania, which borders Hungary. Sara said her grandfather hit it off with Ovi right away, and she also found him to be charming and attractive.

“I remember Ovi coming over and looking so dashing in his tuxedo,” she said. “I could tell he was so nice by the way he talked to my grandpa and was so kind and respectful.”

Ovi, 28 at the time, also noticed Sara, but there were rules about not socializing with passengers. The waitstaff wasn’t allowed to do touristy things with the passengers or access passenger hallways. Getting to know Sara posed a big risk for him – he could have been fired or worse, he said.

“I just felt she was really special,” he said. “That’s why I took the risk.”

And Sara could tell that he liked her.

Cruise rules be damned, he rented a car for them to tour Cozumel, Mexico, one of the stops on the cruise. They visited beaches, ate lunch, talked a lot and shared a first kiss. They spent as much time together as they could after that.

“I ended up abandoning Grandpa pretty quickly for Ovi,” Sara said. “Grandpa and I had all these tours booked together, but when I got to spend days with Ovi, he had to do his tours by himself.”

Sara was in love. As far as she was concerned, Ovi was the only fish in the sea worth catching.

“I never talked to another guy after that,” she said. “I remember at the end of the cruise Ovi said, ‘I think I’m falling in love with you.’”

The last breakfast at Ovi’s table, Sara sobbed, and didn’t stop sobbing the whole way home. She thought she’d never see him again, that it was over.

When his contract ended that November, he visited her in New York. The following month, she visited him and met his family in Romania. He got a transfer to a Manhattan/Bermuda cruise. She would meet his ship every Saturday when it returned to New York.

“I would buy a new dress every week; I would wear some fancy hat, and I would meet the cruise ship every Saturday,” Sara said. “We got really close really fast, like family.”

During the first year they dated, she was living in Brooklyn, but after she was mugged twice, Ovi paid for her to move to a nicer place in Queens.

On Sept. 11, 2001, the day of the terrorist attacks, Sara was waiting for the elevator in the lobby of the South Tower of the World Trade Center, where she worked as a financial analyst at Aon Insurance. She was headed to the 105th floor when the first plane struck the North Tower at 8:46 a.m.

When the building security guards told people to go back to their offices and stay inside the building, Sara, luckily, didn’t listen.

“I remember coming out of the building, looking up, seeing the hole in the building,” she said. “Somebody said it was a plane.”

Having no idea of the enormity of what was happening – the second plane hadn’t struck yet – she took a subway to Grand Central Station, where she used a pay phone to call her family. They were relieved to hear her voice.

“I remember my dad saying, ‘I want you to get out of Manhattan, go to your apartment and stay there,’” she said.

By then, both towers were burning, hundreds were dead, and the entire world was watching live news coverage in disbelief, horror and panic. Ovi was on a cruise ship in Bermuda when an officer on the ship turned on the television to show him the tragedy unfolding in New York.

“I realized,” he said. “I was worried because I knew she was there.”

It took him hours to get through to the U.S. but eventually he talked to her parents. They told him Sara was OK.

“My mom told me that Ovi was really emotional talking to her, because he couldn’t reach me – I didn’t have a cellphone,” Sara said.

Less than two weeks later, he asked Sara to be his wife. She said yes.

“I knew she was the one, and after Sept. 11, I just thought it was a good time,” he said. “My golf guys always joke that I caught her in a weak state of mind.”

“It just made you realize what was important in life,” Sara said.

They decided to move to Pittsburgh, where she got a position singing at Calvary Episcopal Church in Shadyside.

“The first day I had that church job, I ran up to the minister and said, ‘How soon could you marry me?’” Sara said. “I called my mom and said, ‘I’m getting married Saturday – Can you guys come?’”

Ovi and Sara were married Dec. 8, 2001. A year later they had a more traditional wedding, which Ovi’s family was able to attend.

Ovi had been living in the U.S. on a tourist visa, but when they were married, he received a work permit. After a year, he was able to apply for a green card, and in 2005, became an American citizen during a ceremony at the courthouse in downtown Pittsburgh.

“It was really a beautiful, meaningful service,” Sara said. “I remember Ovi taking his vow of loyalty to the United States.”

“It was really something, really special,” Ovi said.

Her grandfather attended that ceremony and their wedding. The couple remained very close to him until his death in 2008.

The couple now lives in North Strabane with their three children, Henry, 9, Alex, 6, and Charlotte, 1. Sara is president of her family’s business, Botkin Family Wealth Management, in Peters Township, and Ovi is a real estate agent for Howard Hanna.

“Even now when we go on a cruise, the formal dinners are one of the highlights,” Ovi said. “The guys wear tuxedos and the ladies wear pretty dresses. It’s very fancy.”

Next month they plan to take a trip to Italy, just the two of them. This year, they’ll celebrate their 19th wedding anniversary, and 20 years since that magical cruise. They have a 23-foot boat and named it “The Century,” after the cruise ship on which they met.

“I’m just so proud of Ovi,” Sara said. “He came to a totally new country and is such a beloved member of my family. He’s the best dad, the best husband. My dad always says I hit the jackpot.”