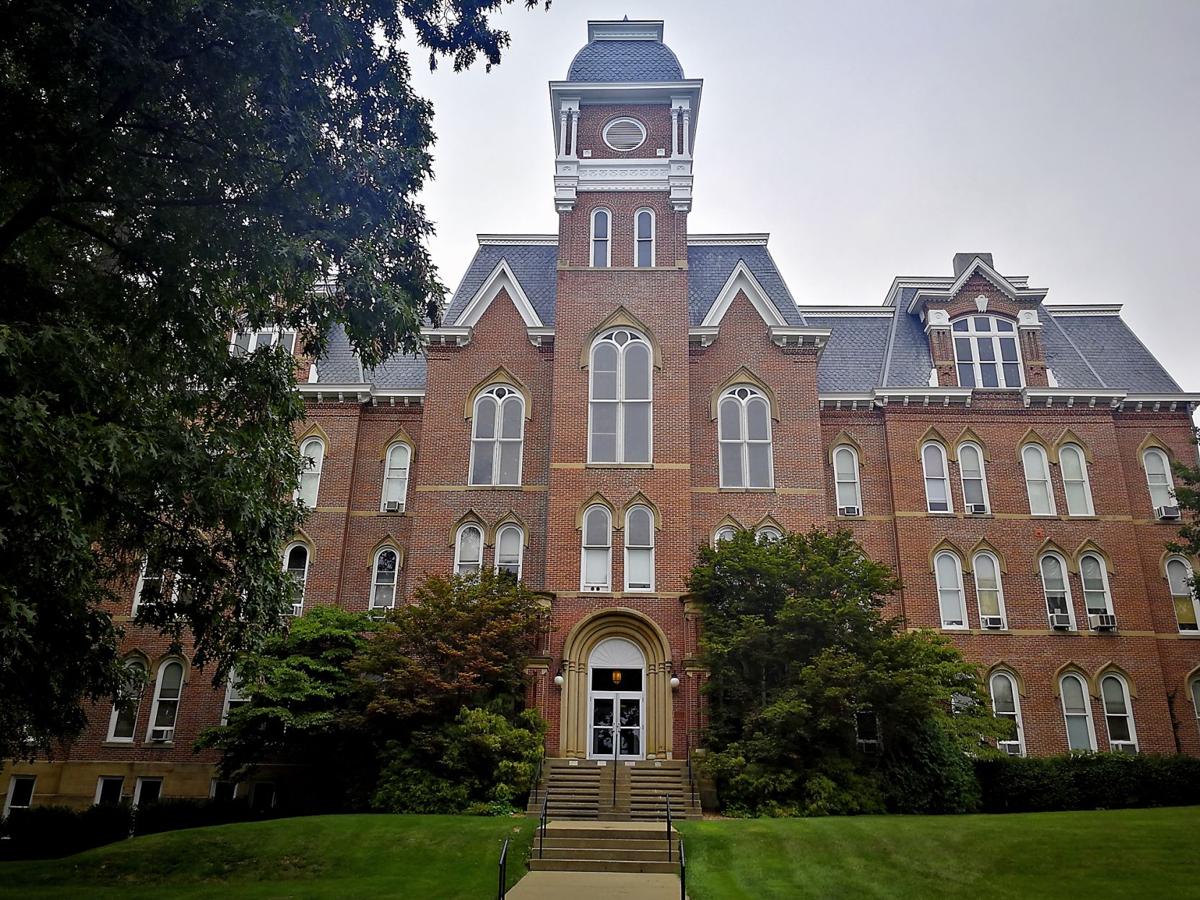 Miller Hall, on the campus of Waynesburg University, houses the Paul R. Stewart Museum, whose collection includes a significant number of pieces of Greensboro Pottery. 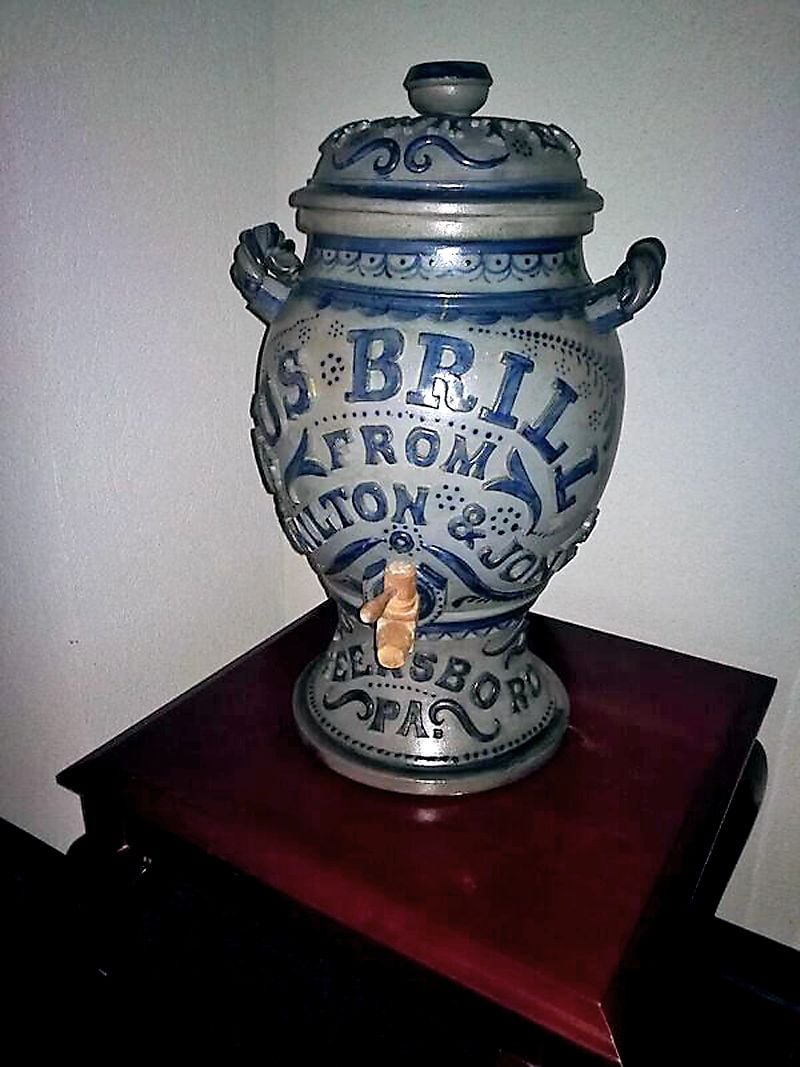 A bar-top water cooler is among the pieces on display at the Paul R. Stewart Museum. 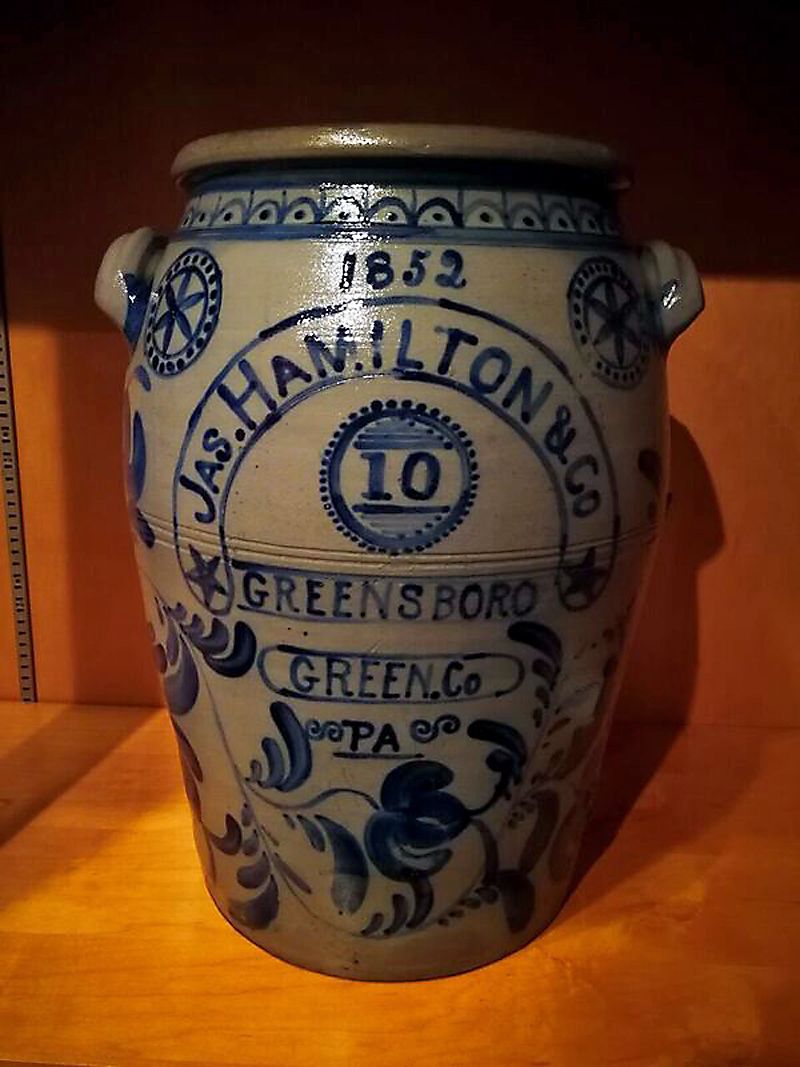 Jas. Hamilton & Company crock on display at the university musuem 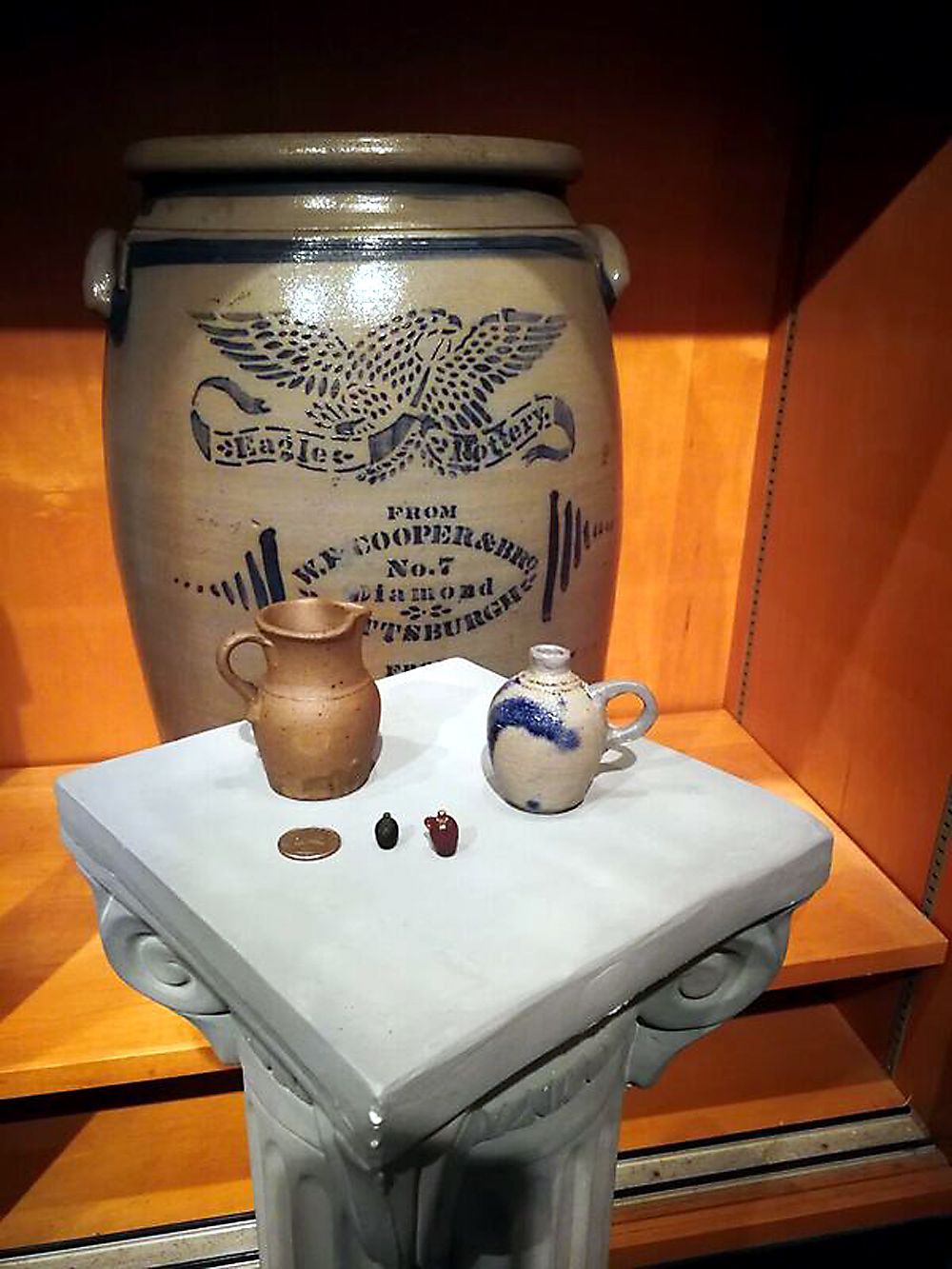 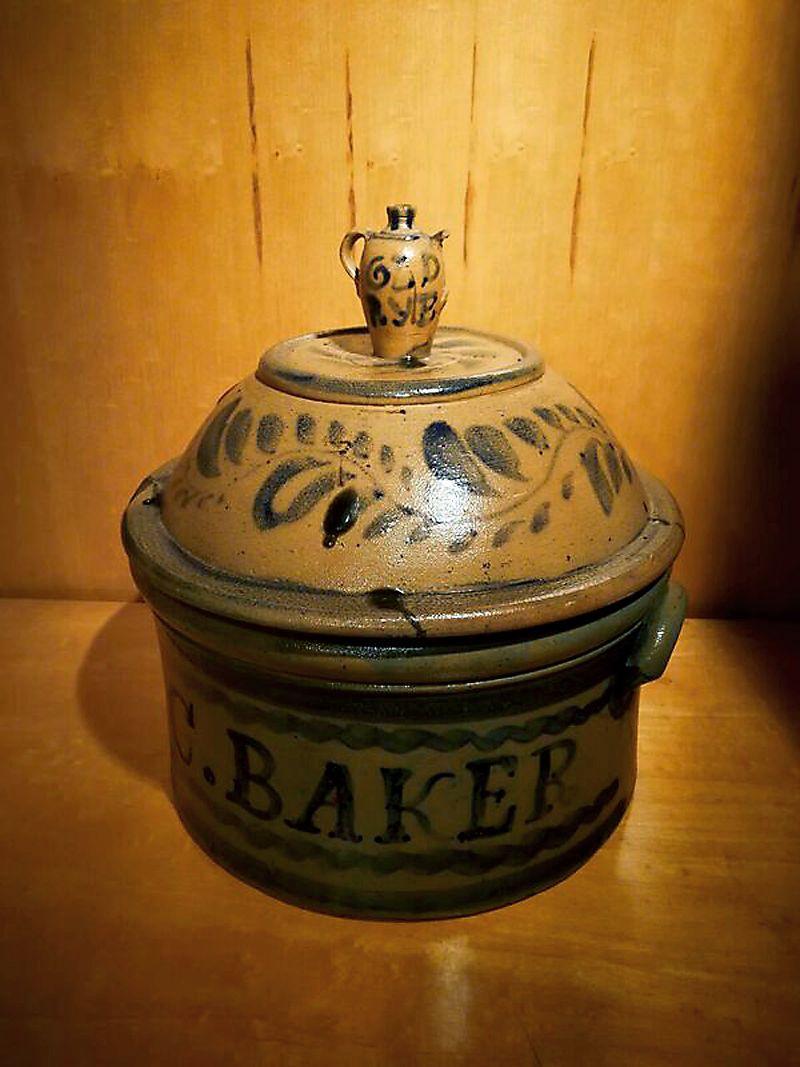 This C. Baker Cake Crock is part of the locally made pottery collection on display at Waynesburg University. 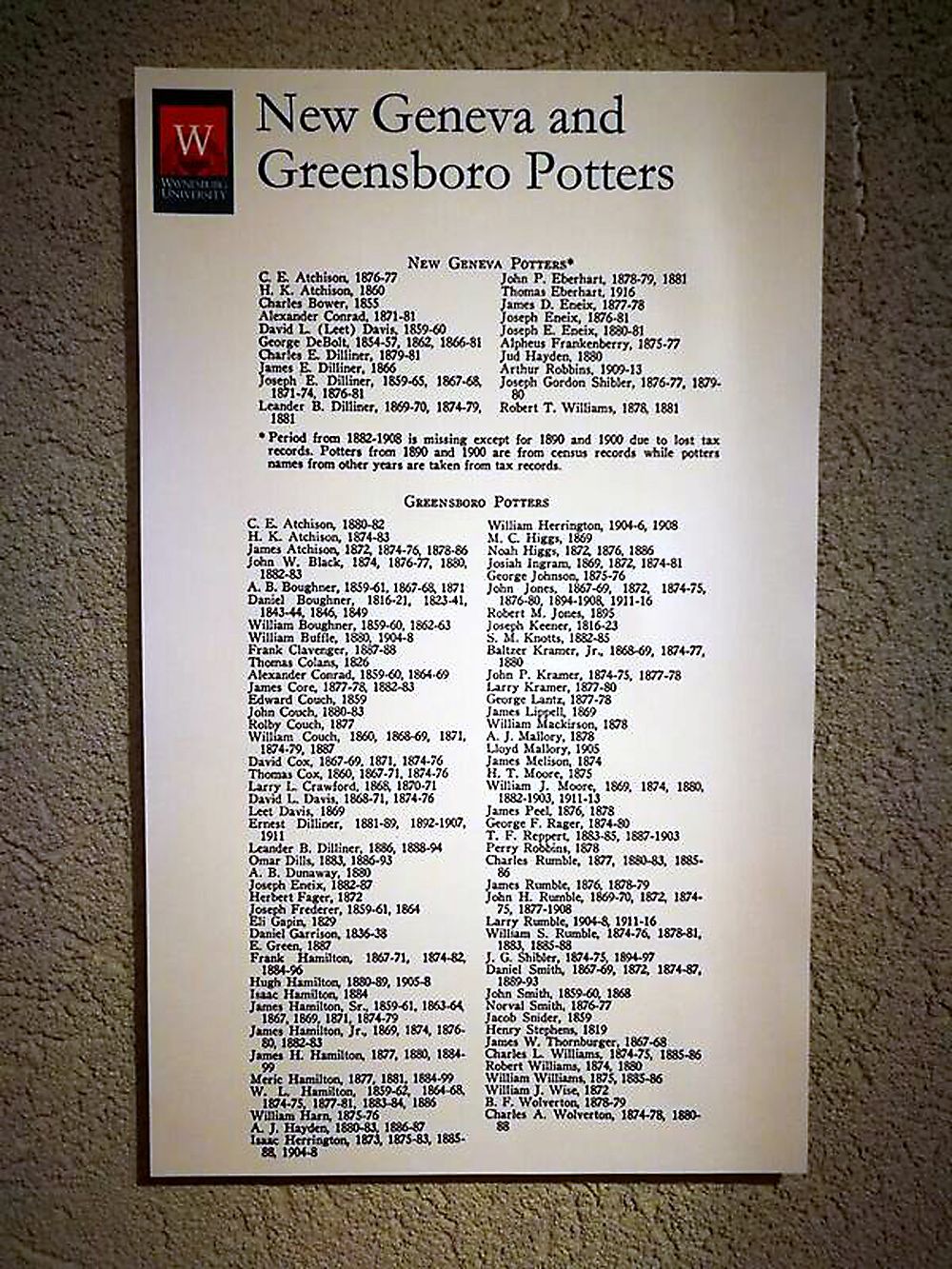 Miller Hall, on the campus of Waynesburg University, houses the Paul R. Stewart Museum, whose collection includes a significant number of pieces of Greensboro Pottery.

A bar-top water cooler is among the pieces on display at the Paul R. Stewart Museum.

Jas. Hamilton & Company crock on display at the university musuem

This C. Baker Cake Crock is part of the locally made pottery collection on display at Waynesburg University.

When you walk into the ground-floor entrance of Miller Hall on the campus of Waynesburg University, you’ll notice very quickly you are not walking into just any university hall. Besides being on the National Register of Historic Places, Miller Hall also houses the Paul R. Stewart Museum – named for Paul R. “Prexy” Stewart who was president of Waynesburg College from 1921 to 1963.

Founded in the 1880s, the museum contains a vast and varied collection. Its holdings include mineral specimens, fossils, Native American artifacts, fine and folk art, and pottery and glass. It is also a repository for objects and documents that tell not only the history of the university itself, but also the Southwestern Pennsylvania region.

Arguably, one of the most impressive collections in the museum’s holdings is the pottery and glass, which features pieces from the New Geneva Glass Works, often referred to as Gallatin Glass, and a significant number of pieces of Greensboro Pottery.

Greensboro is in southern Greene County on the banks of the Monongahela River. It was only a short distance from a large source of clay that was suitable for the production of stoneware and redware. It was this proximity to a large clay source that first attracted brothers Alexander and James Vance to the region.

In the early 1800s they settled in Greensboro and started a small pottery operation. Others were attracted to the trade and soon there were several potters practicing in Greensboro. Joseph Keener began operations in 1816, and Henry Stephens followed in 1819. That same year, the Vance brothers relocated to Ohio and their business was taken over by Daniel Boughner, who they had brought in as an apprentice. By the mid-1830s, there was even more competition in the market as Thomas Colans, Eli Gapin, and Daniel Garrison had all opened business as potters.

By the 1860s more than two dozen potters were working in Greensboro, and with items such as jugs, mugs, bowls, plates, crocks and pots being produced daily, the town became the center for pottery west of the Alleghenies. According to Courtney Dennis, associate director of the Paul R. Stewart Museum, “The pottery and glass industries, unique to the Greensboro and New Geneva areas due to their geographic position, initially served a utilitarian need. In the process, many artisans were attracted to the area, which played a role in establishing the community’s legacy as a center for arts and culture. Today, Greensboro pottery and New Geneva glass are highly prized by folk art collectors.”

Of all the names associated with Greensboro Pottery, none may have been as prevalent as that of Hamilton. There were no fewer than eight members of the Hamilton family involved with the pottery business. James and Leet Hamilton came to the area sometime around 1850. They were already experienced potters and opened a business under the name “James Hamilton and Company.”

Leet Hamilton would sell out to his son and son-in-law in the mid-1860s, and they opened a competing business on the other side of town named “Hamilton and Jones.” The business would also, at different times, be called Star Pottery and then Union Works. The two Hamilton companies produced large crocks that were used to transport food stuffs. The Hamiltons remained in the pottery business until the end of the century. In 1899, James H. Hamilton sold out to Thomas Reppert, bringing an end to nearly 50 years of the Hamilton family leading pottery production in Greensboro.

It may be that the Hamiltons realized that the heyday of Greensboro Pottery was coming to an end.

“Several theories have been posited as to the reason for the decline of the pottery industry in Greensboro – one being the large amount of competition with so many potteries in operation. Another is the increased distribution and use of the glass canning jar, which lessened the need for stoneware counterparts. It is generally accepted that by the beginning of World War I all significant pottery production in the area had ended, and 1916 typically marks the end of stoneware manufacturing in Greensboro,” says Dennis.

The history of this significant time in Greene County is preserved at the Paul R. Stewart Museum. Boasting a collection of nearly 400 pieces of pottery, visitors to the museum can view a broad sampling of pieces. The large crocks, many of which are almost three feet tall, are impressive not only for their size, but for the beauty of their design. There are also smaller salesman samples that can be viewed.

Also on display are several small jugs from the “Smallest Jug Contest,” held in Greensboro in 1880. These jugs, the size of a quarter, are actually functional. One stipulation of the contest was that the jug must be made to hold liquid and could not be solid. The winner of the contest was Frank Cleavenger, with Eliza Green taking runner-up honors. The most interesting piece in the collection is the Gus Brill tavern water cooler, made by the Hamilton and Jones Co. The piece measures just under three feet in height and has blue rings and a scalloped front band. The handles are lug nut in shape with a twisted-rope style. It is also heavily decorated with applied pie-crust lettering, which, according to Dennis, is one of the features that makes the piece so unique. She went on to say, “It is probably one of the rarest pieces in not only the museum’s pottery collection, but the collection as a whole.”

To see this amazing collection, contact the Paul R. Stewart Museum between 8:30 and 4:30 p.m. Monday through Friday to schedule a tour.