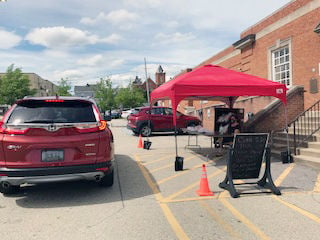 Patrons wait in their cars outside of Citizen’s Library in Washington. 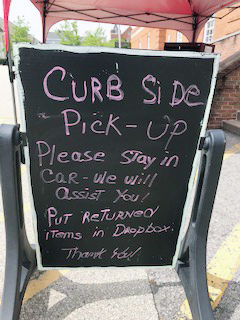 A sign stands in the parking lot of Citizen’s Library informing patrons of its new curbside policies.

Patrons wait their turn to be served in the parking lot of Citizen’s Library in Washington.

Patrons wait in their cars outside of Citizen’s Library in Washington.

A sign stands in the parking lot of Citizen’s Library informing patrons of its new curbside policies.

Patrons wait their turn to be served in the parking lot of Citizen’s Library in Washington.

Except for online services, libraries have been in an induced coma since the coronavirus lockdowns started in March.

Items that patrons checked out before then have been languishing in their homes, since library doors have been locked. Even outdoor boxes where books, DVDs, compact discs and other items could be returned have been closed tight.

But, as Washington and Greene counties are now in the yellow phase of reopening, and the green phase is perhaps not too far over the horizon, libraries have started to stir from their slumber.

Some libraries in both counties started curbside, by-appointment service on Tuesday, and others will be following suit in the days ahead. Other libraries are looking to reopen, but with restrictions designed to assure that patrons don’t linger.

At the Flenniken Public Library in Carmichaels, for instance, only 10 patrons will be allowed into the building at a time. Those who do come into the building will have to sign in at the front desk in case library officials need to carry out contact tracing. All patrons will have to wear masks, a 30-minute time limit will be placed on computer use, and the computer and surrounding areas will be disinfected after each use.

Wednesdays between 9 a.m. and 10 a.m. have been set aside for patrons at high risk.

Restrooms will be closed to the public, and social gatherings will not be allowed. The Flenniken Public Library offers fingerprinting services for job seekers and people who need them in order to get their licenses renewed for certain occupations, and individuals who want to be fingerprinted will have to come into the building, sign in, and then wait outside. They will be called back into the building when they are ready to be fingerprinted.

The library only has a staff of six people, said Nicole Mitchell, the library’s director, and “we have a pretty good plan in order here,” she said. “I know we’re going to be super busy with fingerprinting.”

Libraries are reopening under framework that’s been offered by the Office of Commonwealth Libraries. With curbside service, patrons will be able to contact individual libraries or place holds on material in that library’s collection. Personnel from the library will then contact patrons to determine when they can pick it up. Patrons are asked to wear masks and practice social distancing when picking up items.

When items are returned, they will be quarantined for three days. Any items that were checked out before the coronavirus lockdowns will be due June 30.

Online programming will continue at all the libraries.

The response of patrons to curbside service has been “absolutely fantastic,” according to Diane Ambrose, director of Citizens Library. When it started on Tuesday, about 20 cars came into the library’s lot within an hour, and they had 50 to 60 bags worth of material ready to give patrons.

Curbside service has been greeted with similar enthusiasm at Peters Township Library, according to Myra Oleynik, its director. Patrons have been pulling in to four designated parking spots, and they can pop the trunk on their vehicles and the items can be placed in the car without any contact with library staffers, she said.