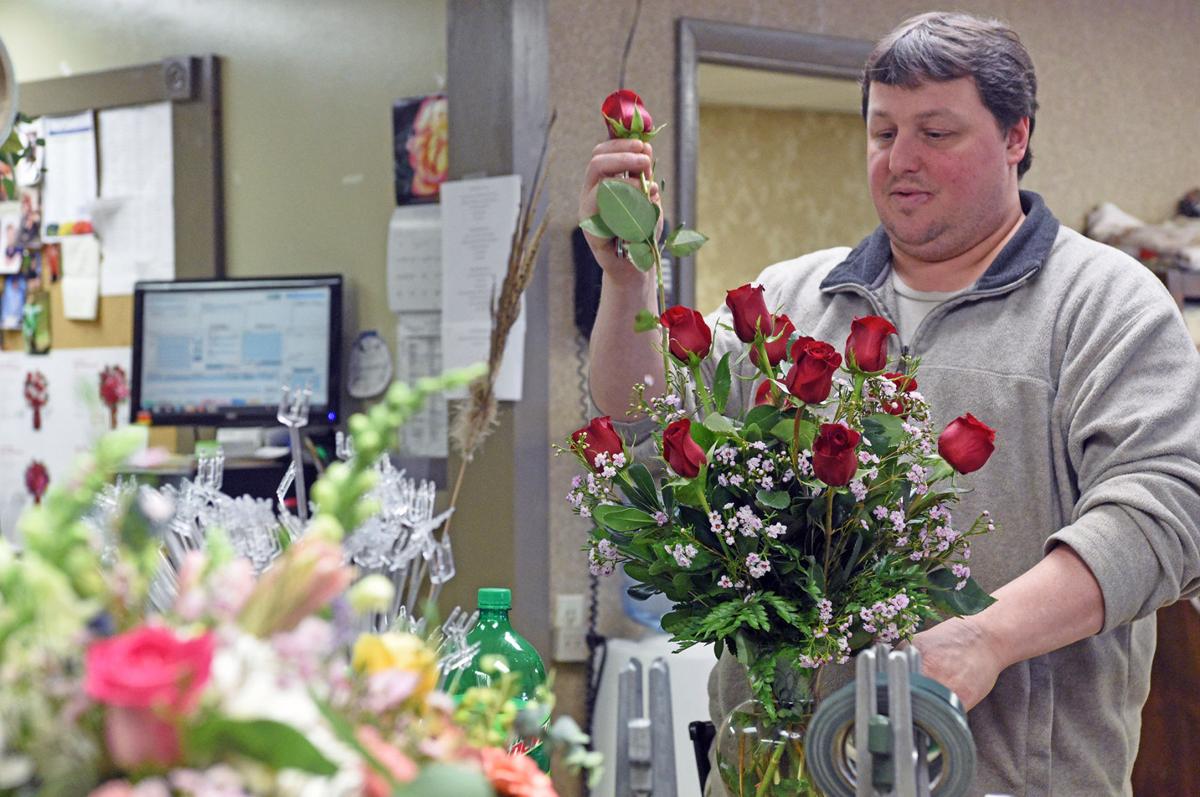 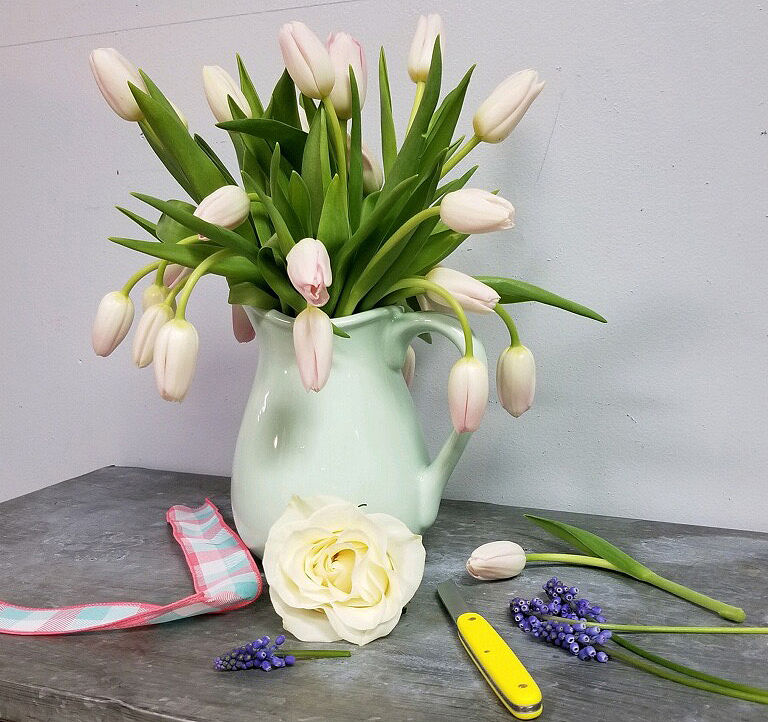 An arrangement from Ivy Green 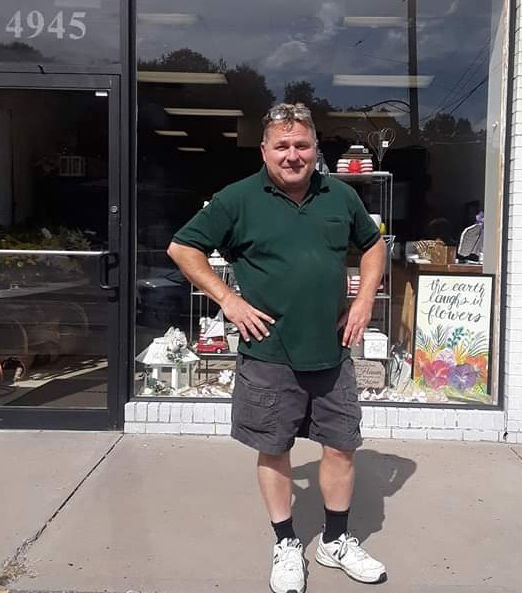 John Wallace stands outside his storefront, which is currently shuttered because of the coronavirus crisis.

An arrangement from Ivy Green

John Wallace stands outside his storefront, which is currently shuttered because of the coronavirus crisis.

Where have all the flowers gone?

Apparently, they’re missing because of COVID-19.

According to Melissa Mega, owner of The Ivy Green on South Main Street in Washington, the coronavirus has disrupted the chain of supply for florists because major wholesalers are almost all closed.

In fact, she said some of her major suppliers are from the east coast must go through New York and Miami, two of the hotspots were the disease rages.

“It’s sad to see,” said Mega as she checked her social media feed, “flowers being destroyed.”

While blooms lay dying on docks, Mega and other area entrepreneurs refuse to let the pandemic kill their businesses.

Though physical buildings are closed to the public for walk-up sales and orders because the business has been deemed as nonessential, the industry has been thrown a lifeline.

On March 31, a clarification from the office of Gov. Tom Wolf was received by florists in Pennsylvania. The release said if a florist conducts online sales only and offers no-contact delivery, it is permitted. Storefronts, however, must remain locked.

Most owners are hopeful to fill orders for Mother’s Day, which is one of the industry’s biggest holidays along with Valentine’s Day and Christmas.

“(COVID-19) has devastated out business,” said Chris Wallace, who has owned Wallace Flowers in Bethel Park with her husband, John, for 30 years.

John’s father previously owned the shop, which is celebrating its 75th anniversary.

“We are trying to figure out the healthiest and best way to do it for Mother’s Day because I actually think it’s our No. 1 holiday. You marry your wife, but can’t forget your mom,” Wallace surmised.

“If we don’t do Mother’s Day,” added Larry Jones, “it will be detrimental to our industry.”

Jones has owned Washington Square Florist for five years. Prior to that, the Washington resident worked at that store for 25 years.

According to Mega, florists have already suffered because “the early spring season is huge” and leads into Easter.

“A typically strong spring season is very much in doubt,” she said.

Because most churches have canceled services, Wallace Flowers and Washington Square Florist have lost the bulk of their Easter orders.

For Palm Sunday alone, Jones said he typically supplies palm to 40-50 worship sites. He already had a handful of cancellations for tulips, hyacinths and daffodils for Easter services.

Though she noted the grocery stores have eaten into the Easter profits, Wallace said she is usually sold out for the holiest Christian holiday. She provides arrangements for 12 churches, but only delivered palm and flowers to one during Holy Week and Easter because it televised Mass on those weekends.

“We are usually sold out for Easter. We got 700 plants, lilies, hydrangeas, daffodils and hyacinths,” said Wallace.”Because we have a huge church business, we took a major hit.”

Because Assistant’s Day is another floral event in April, Wallace estimated the company’s losses for the month alone would be between $55,000 to $60,000. In May, Wallace Flowers typically fills 300-400 orders the four days prior to Mother’s Day.

Currently, Wallace Flowers has $3,000 worth of inventory sitting in its refrigerated coolers.

On March 13, the store donated 49 centerpieces created for a charity event that was canceled to a nearby nursing home. The company also bundled up 300 roses and delivered them to the Residence at Bethel Park or had them handed to customers picking up take-out orders from Pasta Too.

Wallace noted the flowers were misted with disinfectant and not wrapped in cellophane as the coronavirus can live on such surfaces for up to three days.

“We don’t want to get anybody sick,” Wallace said. “Instead of watching these flowers rot away, this was a way to brighten up people’s day or pick up their spirits. Everybody needs some cheer.”

Come May 1, when Wolf’s stay-at-home nationwide mandate may be lifted, flower shop owners hope they can brighten the lives of teenage girls and brides heading into the prom and wedding season.

Washington Square Florist handles at least 150 prom orders from Trinity as well as Wash High. From May through October, he usually averages at least two weddings weekly.

While Jones noted he has had no cancellations yet, he anticipates the closer the wedding dates come, the more likely there will be postponements.

As far as proms, he added, “There’s a good chance they may not have them.”

“There’s uncertainty, We don’t know the state of (proms). I’m concerned that they would be canceled,” she said.

Mega is more hopeful regarding her “larger” wedding business as well as her online sales and phone orders. To date, she has had 10 events, including showers, postponed.

“We are fortunate they are only that. Postponements and not cancellations,” Mega said.

She said, however, the every-day business has come to “quite a halt” because of the coronavirus. She said 10-15% of her business is walk-ins and with the doors shuttered there is none of that.

Currently, Mega is working with Chicco Baccello, the coffee shop and deli on South Main Street in Washington, and The Marketplace at Emerald Valley, LLC to provide tulips to generate revenue. Ivy Green is also accepting online or phone orders and processing them with no-contact delivery.

“I’m just happy to be able to take care of my customers,” said Mega, who lives in Lone Pine. “Any little bit helps. I have reason to be encouraged. This is my livelihood.”

Revenue from arrangements for funerals have all but withered. Because visitation hours have been reduced and gatherings are limited to groups of 10 or less, people are not ordering flowers to be send to funeral homes.

“Even family members aren’t ordering them for the caskets,” said Jones. “All seem to be indicating memorials will be held later. But, it’s also an uneasy time for people, especially those concerned about spending money in these uncertain economic times and losing jobs.”

Wallace Flowers saw the decline coming. From the second week of January through the second week of February, it was inundated with floral arrangement requests from as many as 11 different funeral homes. During that time frame, it filled 142 orders alone for the Jefferson Memorial Cemetery, Funeral Home and Crematory in Pleasant Hills.

“Funerals are our bread and butter, 70% of our business,” said Wallace, who has had seven wedding cancellations so far. “Our biggest time is December through May and we have lost all that but we knew something was going on because we were extremely busy early in the year. It could either have been the flu or COVID-19 and it had me wonder if it was misdiagnosed. We saw this a couple of years ago with the opioid epidemic. Florists see what’s happening before it makes the news.”

Not since 9/11 or the Great Recession have florists seen or experienced such a downturn in their industry. Wallace laid off its eight-person workforce, which included one 76-year-old employee, something it did not have to do in 2001. The business also took a $40,000 hit financially.

“We are too old to take out a debt like that now,” said Wallace.

Mega admits to similar apprehension. See noted that the economy was “terrible” in 2008 but this is worse. “I have never experienced anything like this where we are almost completely closed. No one knows what’s going to happen.

“I could be emotional and have anxiety because I am concerned about my livelihood and craft but I’m hopeful,” Mega said. “My best hope is florists will be okay if we can do business for Mother’s Day.”

“People, especially those who use us a lot, want to help,” said Jones. “Buying a gift card helps with the cash flow. It may help us get through this now.”

Jones, who is updating his website, added though that with the unease surrounding people worried about retaining their own jobs and other working from home, “they are not thinking about flowers.”

Yet, they do shed sunshine in these otherwise grey, uncertain times.

“Flowers provide an element of surprise sometimes. The color,” said Jones. “The joy they give to people. The personal card message also can bring such joy to someone.”