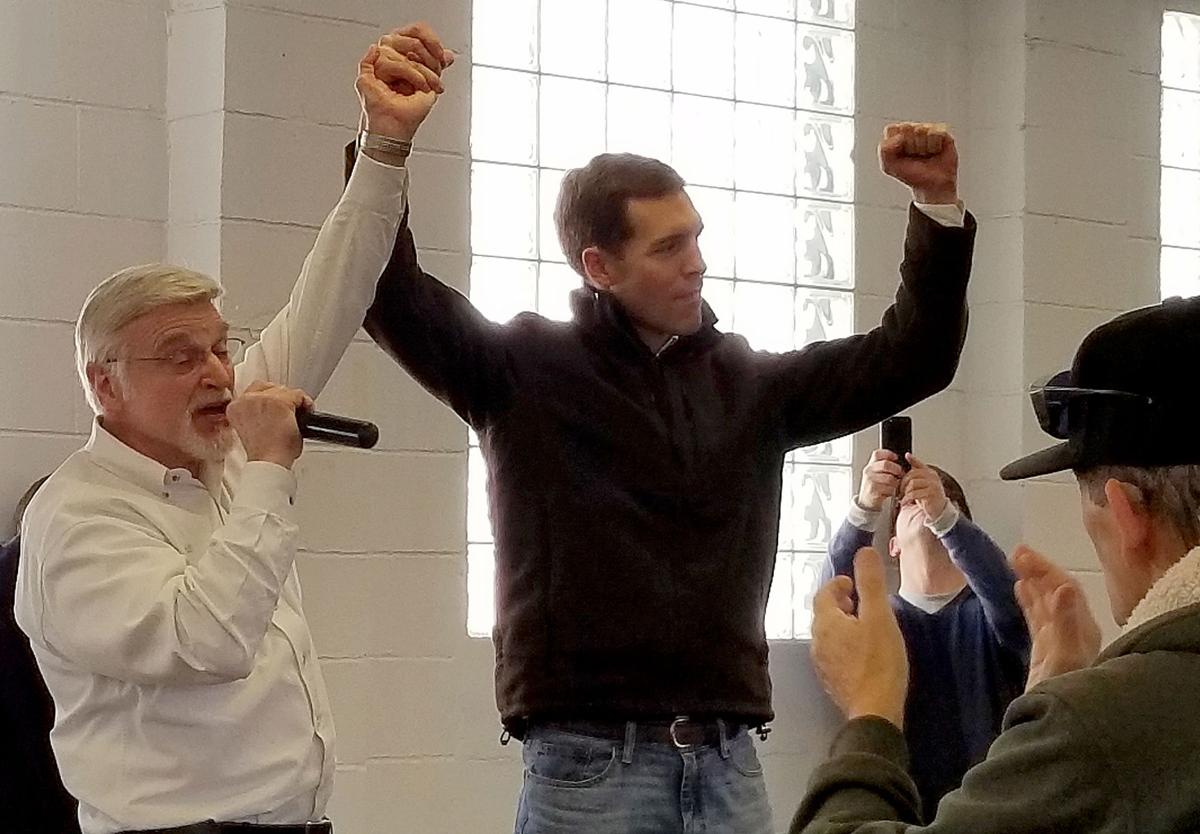 Conor Lamb, a Democrat running in Tuesday’s special election for the 18th Congressional District, received a fiery endorsement from United Mine Workers President Cecil Roberts during a rally Sunday afternoon at the Greene County Fairgrounds near Waynesburg. 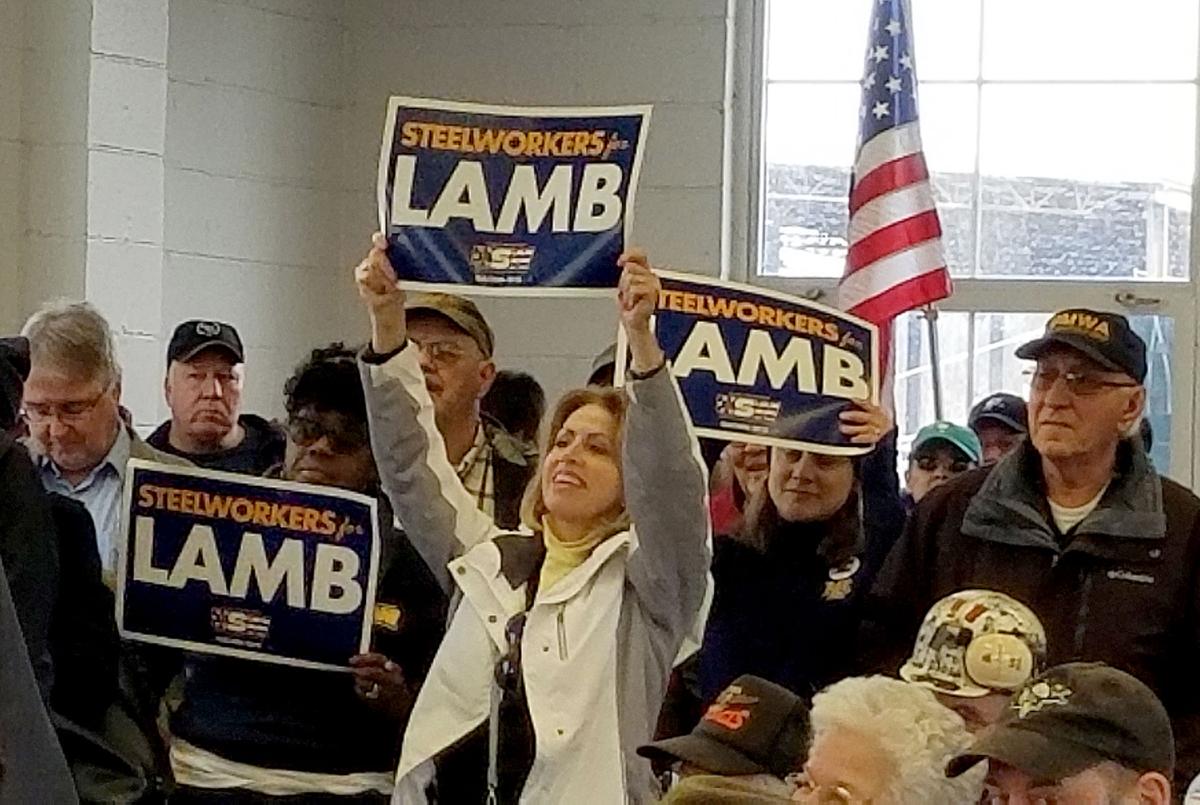 Lynda Nathenson of South Fayette holds up a United Steelworkers sign in support of Conor Lamb while at a rally Sunday at the Greene County Fairgrounds near Waynesburg. 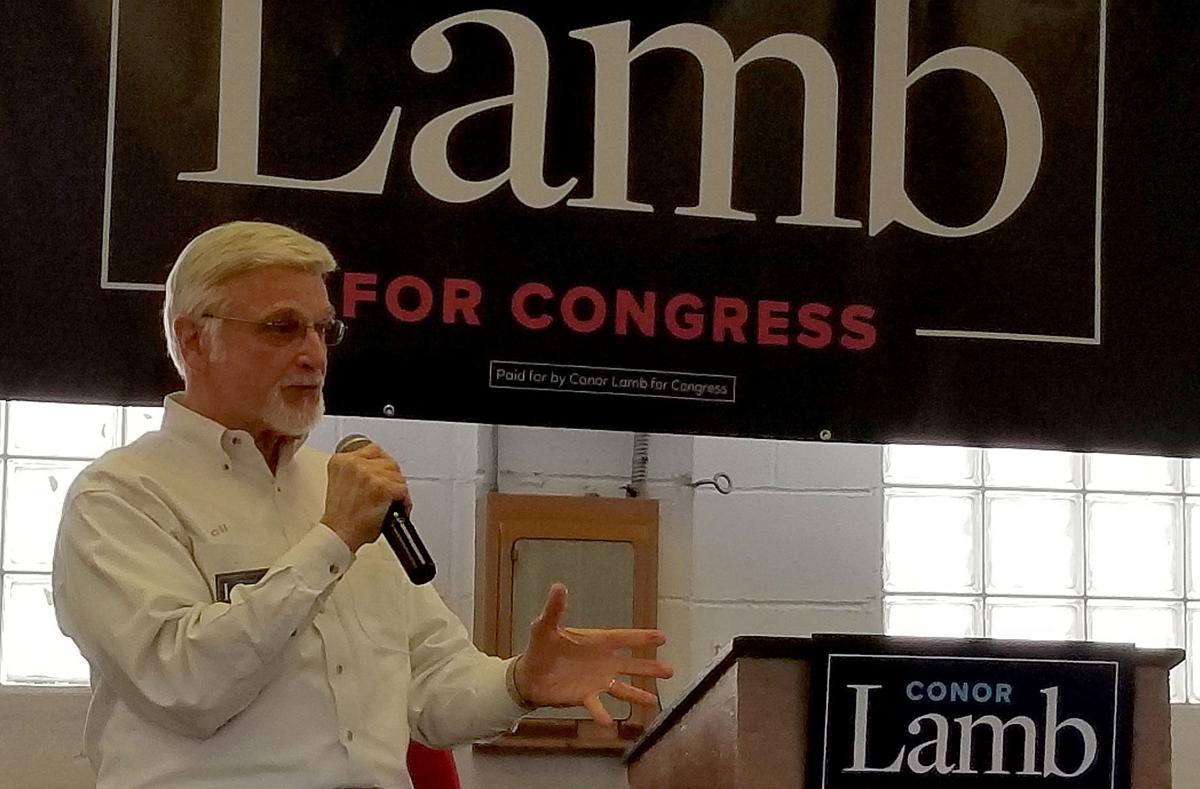 A throng of national reporters swarms Conor Lamb after his Sunday rally with the United Mine Workers at the Greene County Fairgrounds.

WAYNESBURG – The president of the United Mine Workers of America delivered a fiery endorsement Sunday in Greene County of Conor Lamb in the race for the Pennsylvania U.S. House’s 18th District, saying the Democrat will work to protect Social Security, Medicare and coal miner pensions.

Cecil Roberts, speaking like a fire and brimstone minister, urged a standing-room-only crowd in a Greene County Fairgrounds exhibition barn to ask their friends, relatives and neighbors to vote for Lamb, 33, of Mt. Lebanon as a way “to fight back for middle-class America.”

“Treat this as a movement,” Roberts said at an event that attracted national and international media covering a closely watched race that is seen as a test of President Trump’s support in Southwestern Pennsylvania.

A day earlier, the president made his second trip to the Pittsburgh area to lend his support to Lamb’s challenger, state Rep. Rick Saccone, 58, during a private rally in an airplane hangar in Moon Township. Trump also campaigned for Saccone, R-Elizabeth, in January while touring H. & K. Equipment in Coraopolis.

State Rep. Pam Snyder hosted the event for Lamb as the hours count down before Tuesday’s special election to fill a seat in the House that became available in October when former U.S. Rep. Tim Murphy of Upper St. Clair resigned amid a scandal.

“He’s proud to say he supports the unions,” said Snyder as she introduced Lamb, drawing a standing ovation and chants of “Conor, Conor, Conor.”

Earlier, Central Greene kindergarten teacher Missy Brant said the Southwestern Pennsylvania State Education Association has also endorsed Lamb because he is considered to be a supporter of increasing funds for public education.

Brant said Saccone has a voting history in Harrisburg of voting to lower state funding for education.

“This is the last thing we need is another rubber stamp for the wealthy few,” she said.

“You have a fighter here who respects that in Conor Lamb,” Fitzgerald said, referring to the protection of coal miner’s pensions.

Lamb took his turn at the podium and he paraphrased Franklin D. Roosevelt when that president spoke in October 1936 at Madison Square Garden about Americans having the sense that Washington, D.C., had turned its back on their struggles.

“Americans need to know that the government walks on their side of the street,” Lamb said.

He said the country made a promise to coal miners to guarantee their pensions from bankrupt corporations. He also said he does not support cuts to Social Security or Medicare.

“I do not believe as (House Speaker) Paul Ryan does that these are entitlements,” Lamb said. “We will secure your rights to these benefits that you have worked hard for all of your lives.”

Roberts then delivered a rousing speech after noting that everyone in the room has some connection to the veterans who built this country.

“We’re the most patriotic people on Earth here in the coalfields,” Roberts said. “We’ve proven that we are patriotic.”

He said the UMW doesn’t need to lobby in Washington, D.C., when “working people stand up and fight back.”

“(Lamb) believes in us folks in the coalfields. When workers are united, they will never be defeated,” Roberts said.

“We need one of our own in the United States Congress,” he said before reminding the audience that Republican Political Action Committees have spent heavily on Saccone’s campaign.

After the rally ended, retired coal miner Lou Brova of Scenery Hill, Washington County, said he came to Waynesburg to see Roberts speak and pledged to vote Tuesday for Lamb.