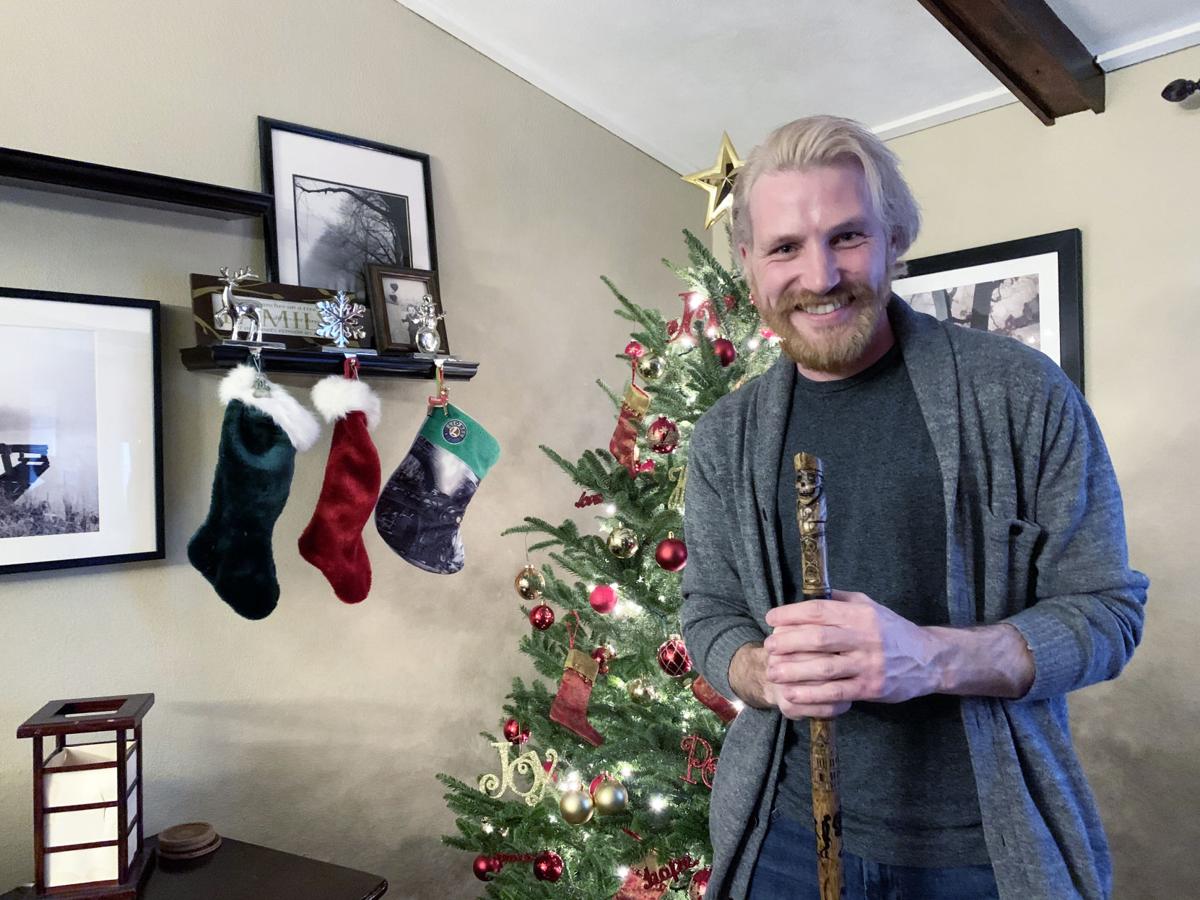 Chartiers-Houston art teacher Michael Fulton is shown with a walking staff he carved for Lord of the Rings actor Sean Astin. Fulton has presented wands and staffs to cast members of the Lord of the Rings and Harry Potter movie series. Additionally, Fulton donates most of the money he earns selling wands to Lumos, a charity launched by J.K. Rowling. 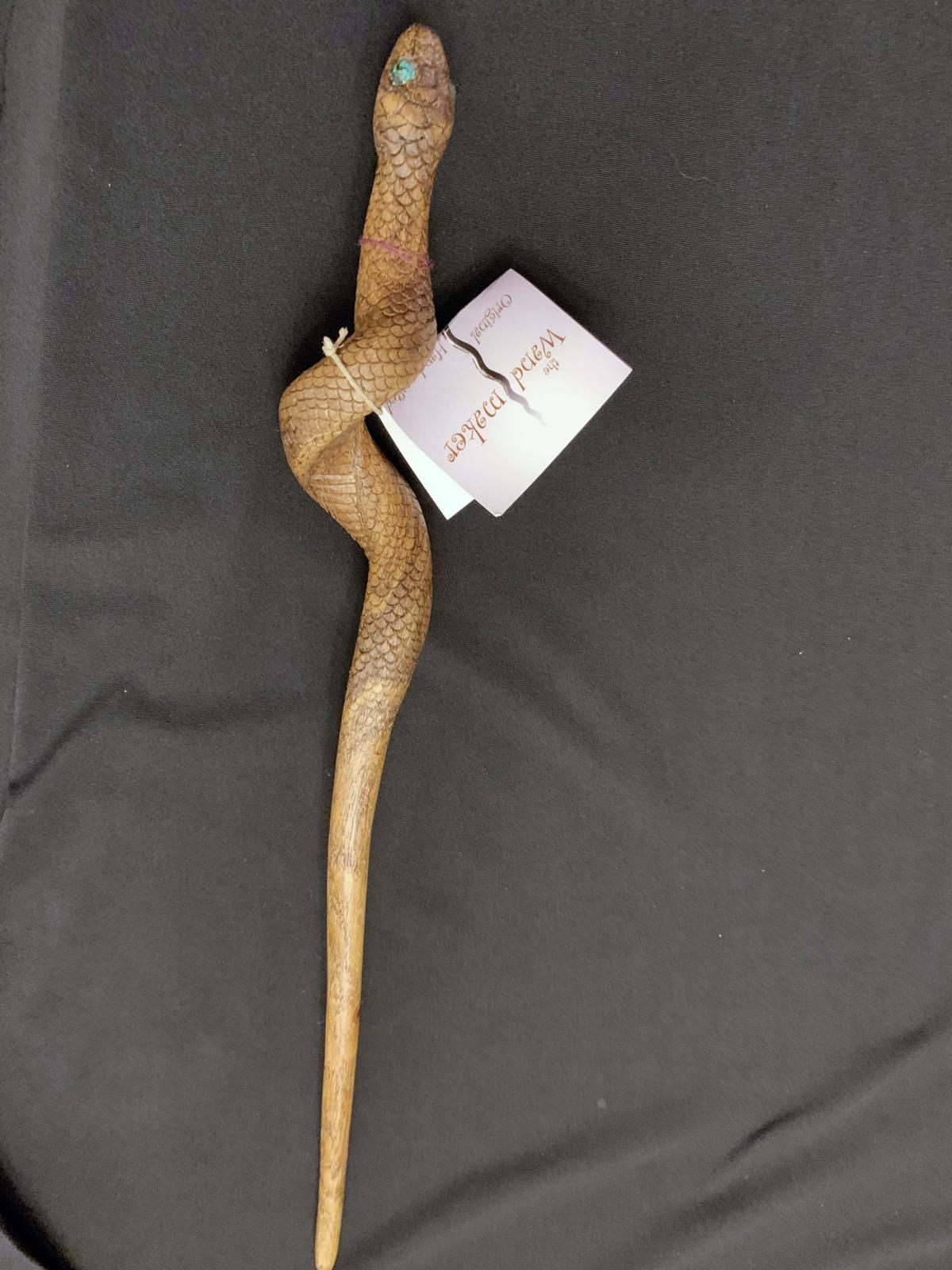 Artist Michael Fulton began making wands about seven years ago. One of his more recent is a serpent wand. 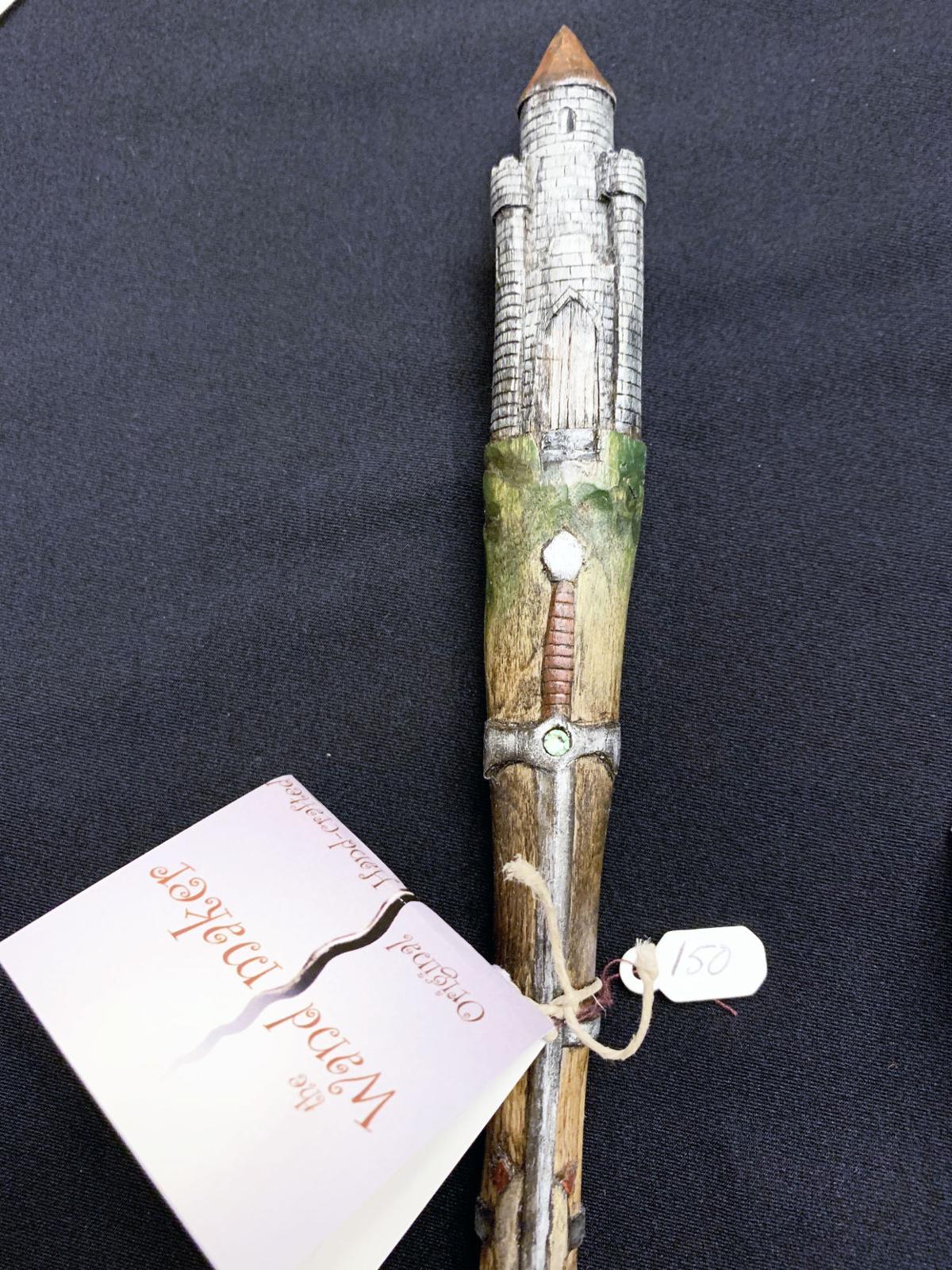 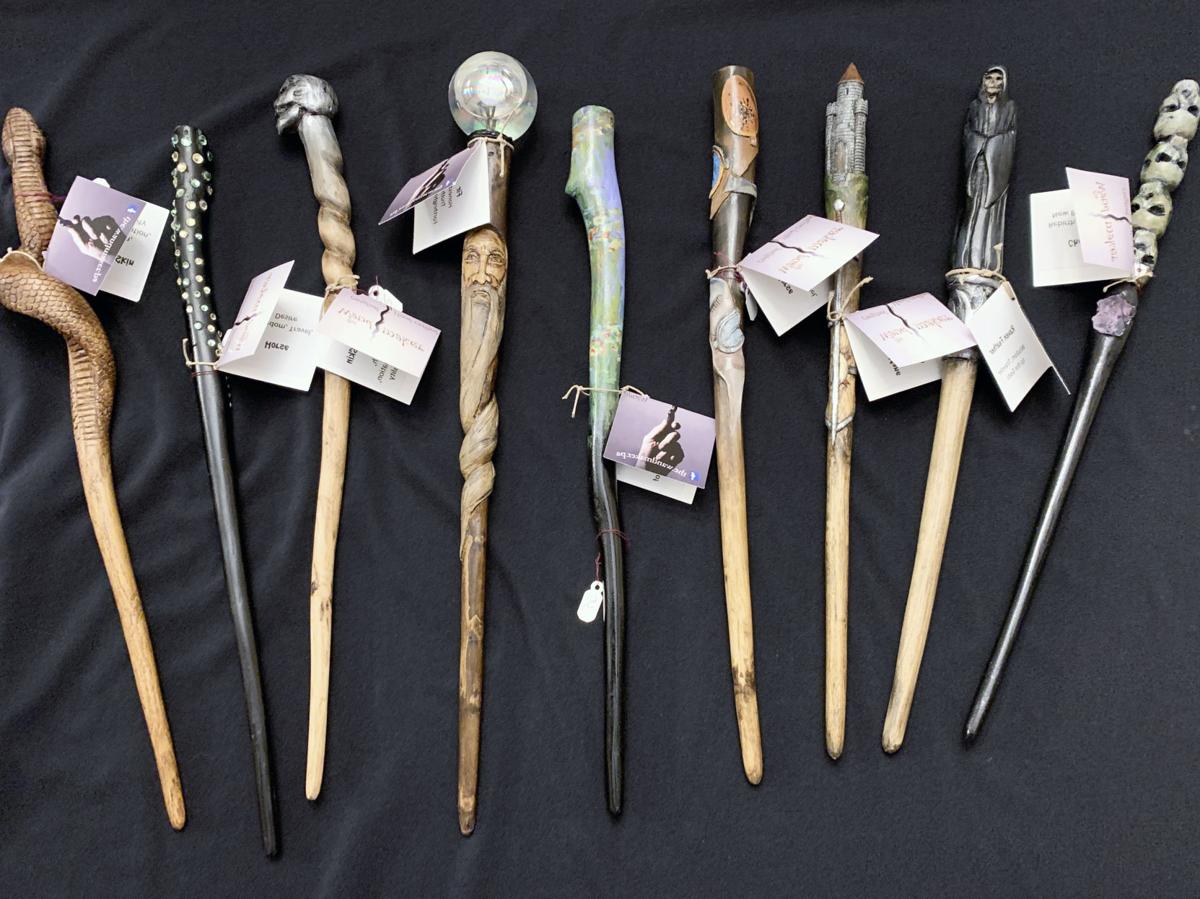 Some of the hand-crafted wands made by artist Michael Fulton.

Chartiers-Houston art teacher Michael Fulton is shown with a walking staff he carved for Lord of the Rings actor Sean Astin. Fulton has presented wands and staffs to cast members of the Lord of the Rings and Harry Potter movie series. Additionally, Fulton donates most of the money he earns selling wands to Lumos, a charity launched by J.K. Rowling.

Artist Michael Fulton began making wands about seven years ago. One of his more recent is a serpent wand.

Some of the hand-crafted wands made by artist Michael Fulton.

Michael Fulton doesn’t have any magical powers. But the Chartiers-Houston High School art teacher, aka “The Wand Maker,” is skilled in the craft of wand making.

A longtime vendor at Steel City Con, Fulton has presented his hand-carved wands and walking staffs to actors including Jason Isaacs, who played Lucius Malfoy in Harry Potter; Billy Boyd, best known as Pippin in “The Lord of the Rings,” and Oliver and James Phelps, who play George and Fred Weasley in the Harry Potter films.

“It’s my way of saying thank you to them,” said Fulton. “It’s my way of expressing how much I’ve enjoyed watching them in films, and acknowledging their work.”

Fulton’s wand-making venture began quite by accident about seven years ago, when he was supervising a student teacher who was instructing his art class.

Not used to sitting idly, Fulton picked up a piece of wood and began carving.

“It progressed from there,” said Fulton. “I do it whenever I get a chance. I don’t watch TV, so I’ll sit in my workshop for hours.”

Fulton whittles his wands out of several woods – cherry, maple, pine, elm – and carves unique patterns and designs into some. Others, he embellishes with gems, stones, and leather.

“Sometimes I have an idea in mind, sometimes I just start carving. There is only so much space on the wood. I carve what I want to, but I think about what people would like, too. A lot of people like skulls and evil things,” Fulton said jokingly.

Three times a year, Fulton travels to the Pittsburgh Comicon, where, dressed as a character from a fantasy adventure film (most recently, he donned a Newt Scamander costume from “Fantastic Beasts and Where to Find Them”), he sells his wands.

Fulton donates a majority of the proceeds from his sales to Lumos, a nonprofit organization founded by Harry Potter author J.K. Rowling to help children in orphanages return to their families or to be placed in a loving family.

“For me, this is a hobby. My livelihood isn’t bound by Comicon. So, to me, it’s almost like, I’m getting money for something I’d do anyway,” said Fulton. “I’m happy to be able to donate to a worthwhile cause.”

He also makes simple wands that he gives away to children at the event.

In November, Fulton met Boyd. For Boyd’s walking staff, Fulton carved an intricate interpretation of “The Last Goodbye,” a song Boyd sings in the final “The Hobbit” movie.

He also carved a walking staff for actor Sean Astin, which included highlights from the Lord of the Rings star’s career – “Rudy,” “Stranger Things,” “The Goonies,” and “50 First Dates.” (Astin canceled his Comicon appearance, but will attend an upcoming expo.)

Fulton graduated from Trinity High School and, after he realized the heavy metal band he played in “wasn’t going to make it big,” he said laughing, enrolled in California University of Pennsylvania, where he majored in art.

He became hooked on fantasy films in college, when he watched Peter Jackson’s “The Fellowship of the Rings.”

He has read and watched fantasy adventure books and films since.

Fulton has taught art at Chartiers-Houston for the past 13 years.

“He’s very creative, he’s good with the kids, he does a great job for us,” said principal Phil Mary. “He has a study hall first period, and I’ll occasionally see him whittling away, cutting (wands) and making them.”

Twice a year, Fulton camps out at Camp Allegheny, a Christian summer camp in the Laurel Highlands that his father, a minister, helped start, “where I put up a tent, sit in front of a fire and whittle away.”

The favorite wand he carved was for Isaacs, who, like many of the Harry Potter actors, is a Lumos ambassador.

“It was my baby,” said Fulton, describing the wand, with a skull carved at the top and a skeleton spine and rib cage carved along the length of the wand. “I spent three weeks solid carving it, and I didn’t want to part with it, but I said if (Isaacs) ever came to Con, I’d give it to him.”

Initially, Fulton was surprised at the popularity of his wands, but he understands the appeal.

“It’s a physical thing. I can do a painting of skulls for example, and it’s nice, but essentially it’s a painting and people see it, look at it. But a wand has three dimensions; it’s something they can pick up, examine the details, they can hold it,” said Fulton. “It’s satisfying because they can see the amount of time you put into it.”