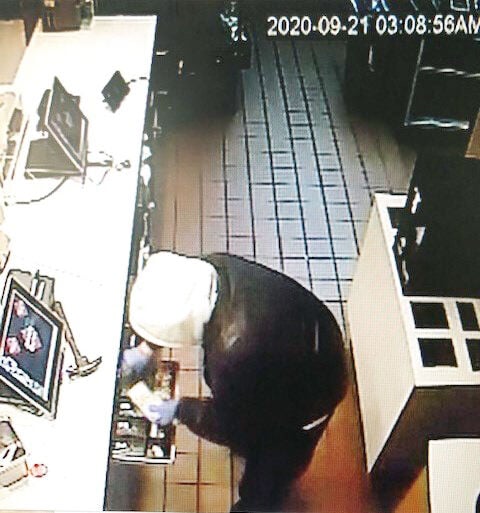 An image from a surveillance camera in the Washington Taco Bell shows money being removed from the cash register.

An image from a surveillance camera in the Washington Taco Bell shows money being removed from the cash register.

An Ohio man who made national news last year for burglarizing more than 30 Taco Bell restaurants in three states was at it again last month in Washington and Allegheny counties, according to local police.

Joshua James Logue, 30, of Columbus, is facing multiple felony charges in South Strabane Township, where is accused of burglarizing the Taco Bell on Route 19. South Strabane also filed charges against him on behalf of Scott Township and the city of Pittsburgh, sites of other Taco Bell burglaries.

In his affidavit, South Strabane detective Ken Torboli wrote that his investigation began Sept. 21, when township police were dispatched to Taco Bell, 460 Washington Road, for a burglary that happened overnight.

Torboli said video surveillance showed Logue using “what appears to be an air rifle to shatter the glass door” before entering the building just after 3 a.m. A hammer was used to break open three cash registers. About $300 was taken.

Logue was allegedly wearing a dark leather jacket over a white hoodie and a face covering when he fled in a pickup truck with an Ohio registration. Torboli tracked the registration to Logue.

That’s when he discovered Logue’s criminal history with Taco Bell. In 2019, he was arrested in more than 30 cases resulting in both convictions and pending charges of very similar Taco Bell burglaries in Kentucky, West Virginia and Ohio.

“Further investigation and a cooperative effort with the Scott Township and Pittsburgh Police Departments in Allegheny County revealed that Logue had also burglarized a Taco Bell in each of their jurisdictions on this same early morning,” South Strabane Township police Chief Drew Hilk said in a news release.

The South Strabane restaurant was the third one broken into that night, according to the complaint. Logue was wearing the same clothing when he burglarized and stole cash from the Taco Bell on Freeport Road in Pittsburgh at 11:30 p.m. Sept. 20, and on Cochran Road in Scott Township at 1:54 a.m. Sept. 21., according to Torboli.

Video surveillance at all three locations “confirm that the same actor, using the same truck, was responsible for all three of these burglaries,” Torboli wrote in the complaint.

According to court documents, Logue stole about $900 in cash from all three locations and caused about $7,695 worth of damage to the three restaurants. He was charged by South Strabane police with three counts each of burglary, criminal mischief and theft.

A warrant was issued Tuesday for Logue’s arrest; however, he’s incarcerated in Adams County, Indiana, according to Hilk and Torboli. He was arrested by the Decatur Police Department Sept 24 following an early morning burglary of a Taco Bell in Decatur, Hilk said in a news release.

Logue allegedly used the same methods to break into the Indiana Taco Bell, but this time activated an alarm, and was arrested at the scene. Torboli said Logue was wearing the same clothing during the Indiana burglary.