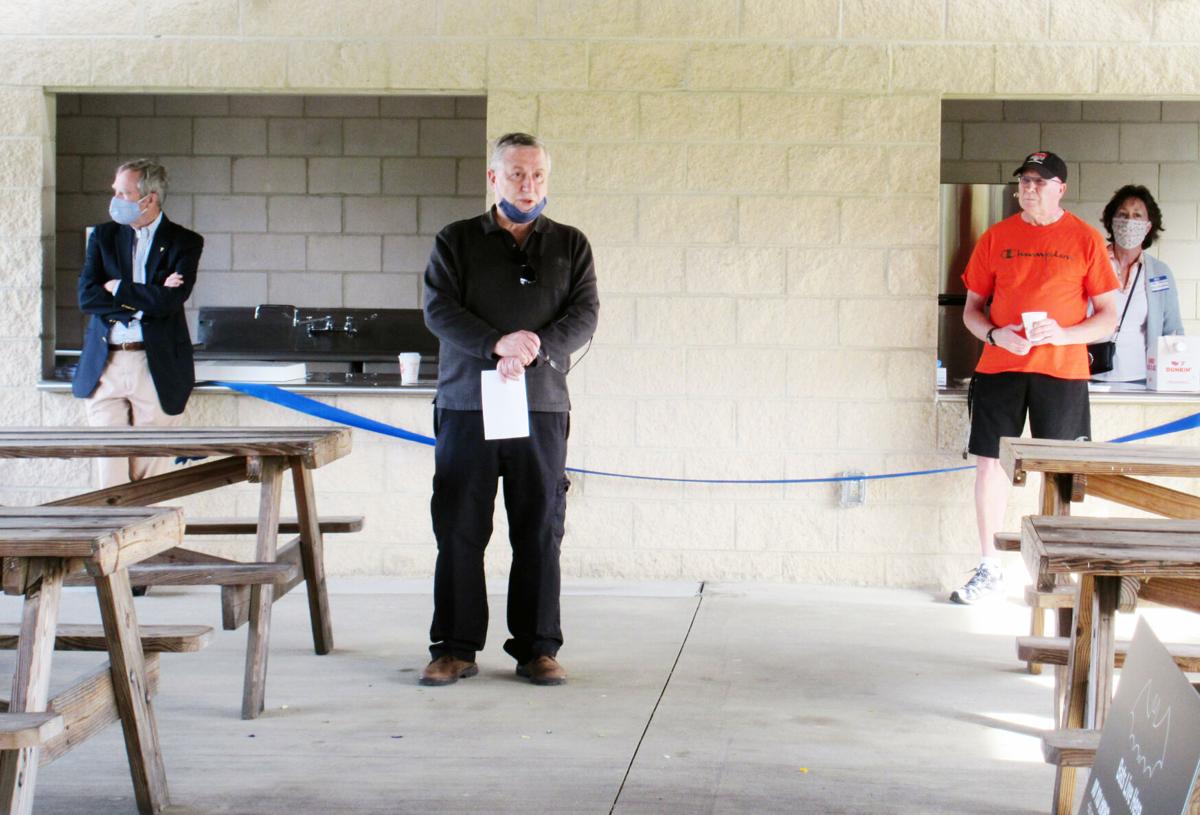 At center, South Strabane Supervisor Bob Weber thanks residents during a ribbon-cutting ceremony Friday for the opening of a new kitchen and restrooms facility in Community Park. 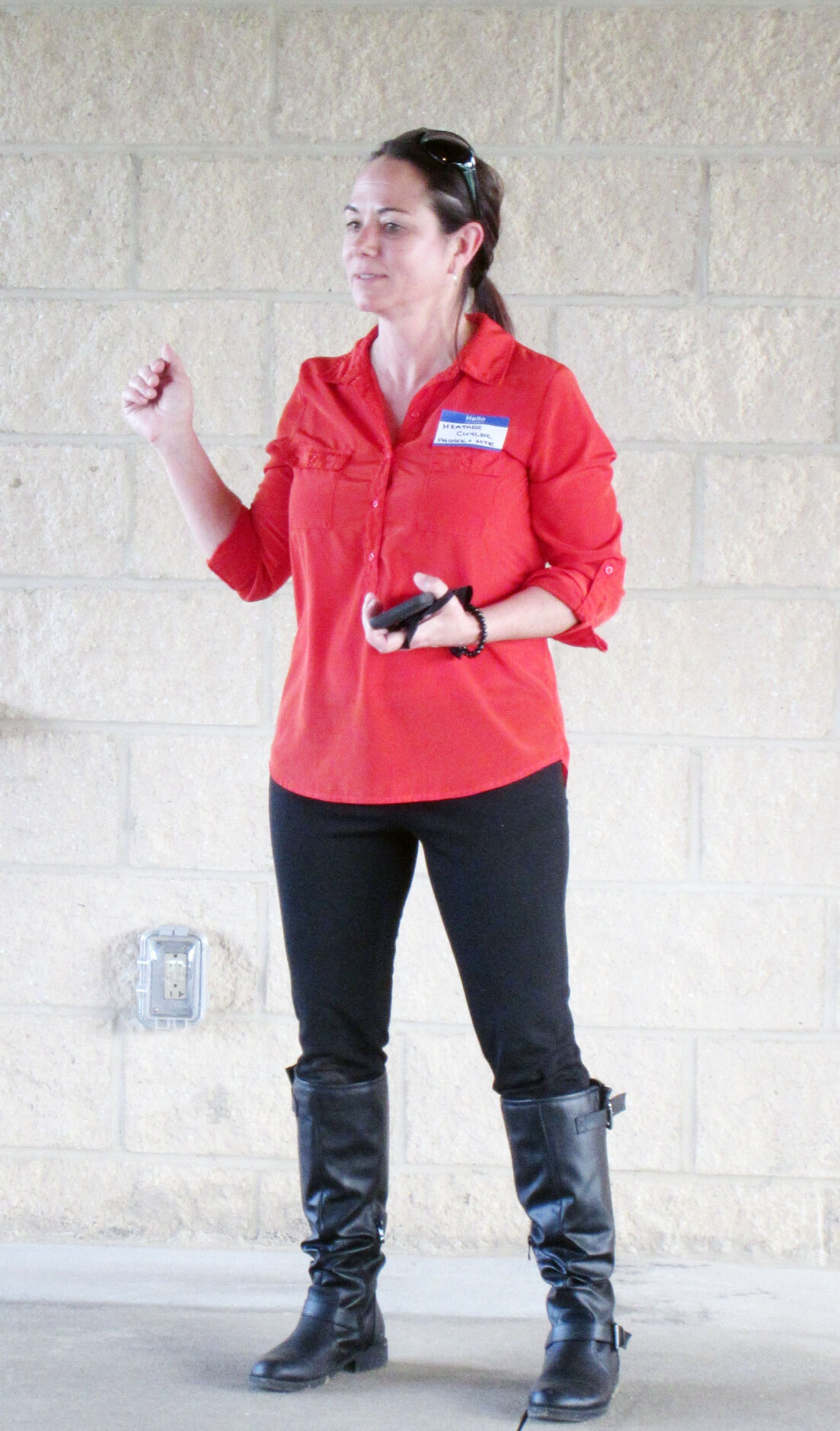 Heather Cuyler, a recreation planner at Pashek + MTR, asks residents to speak up about what they'd like to see in South Strabane's Community Park during an open house Friday evening.

At center, South Strabane Supervisor Bob Weber thanks residents during a ribbon-cutting ceremony Friday for the opening of a new kitchen and restrooms facility in Community Park.

Heather Cuyler, a recreation planner at Pashek + MTR, asks residents to speak up about what they'd like to see in South Strabane's Community Park during an open house Friday evening.

On Friday, the township held an open house forum for park users to offer ideas on what they’d like to see in the park. The evening event also included a ribbon-cutting ceremony for the new bathroom and kitchen facility built at the main pavilion in the park.

“We have had a pretty good response overall,” said Heather Cuyler, a recreation planner at Pashek + MTR, which is the landscape planning firm the township contracted to develop the master plan. “It was nice there were a lot of young families, so we were able to get feedback from some of the youth in the township.”

Cuyler said planned community events are rising to the top of the list of things residents want to see more of in the park, including outdoor movies, summer camps and farmers markets.

“Throughout COVID, parks and recreation has become the forefront in a lot of people’s lives because they were quarantined and this was an outlet for their families,” Cuyler said. “People are starting to see the value in their community parks. For some people, who maybe took it for granted before the pandemic, this is a new appreciation.”

After collecting input from the open house, Cuyler said folks seem to be concerned about overdevelopment. People like the idea of additional trail and environmental activities, but they don’t want “too many ballfields” or too much development, she said. Some residents on Floral Hill Drive voiced concerns that too much development could lead to larger amounts and faster traffic on their street.

“Anything developed needs to be developed in a sustainable way,” Cuyler said.

As far as new amenities, Cuyler said residents are interested in a dog park.

“The township has visited that amenity before, so they have a preliminary plan for a dog park,” she said. “It would be fenced in with a double gate, so you don’t have dogs running in and out.”

One space the township is considering for a dog park is near the smaller pavilion above the multipurpose field. If a dog park were to be located there, it would need accessible parking and possibly another restroom facility with access to water for the dogs, Cuyler said.

Another amenity mentioned is a potential amphitheater near the public works facility, which would be used for movies, concerts and environmental education programs, Cuyler said.

Other ideas included spaces or programs that promote health and wellness, Cuyler said, such as “some additional outdoor activities like yoga in the park or sensory gardens that allow people to decompress if they need.”

The park mast plan is meant to guide decision makers over the next five to 10 years. Any new developments would need to be approved and budgeted, Cuyler said.

“It takes time to secure funding through grants and foundations,” she said.

Overall, park users want it to remain and improve upon inclusivity– they want to make it “a place for everybody,” Cuyler said.

The park survey will be on the township website until April 23, Cuyler said. Anyone interested in becoming more involved in the process or in the township’s parks and recreation programs can reach out to the township or to Cuyler via her email, hcuyler@pashekmtr.com.

“It takes a team, a village, to make things happen,” she said.