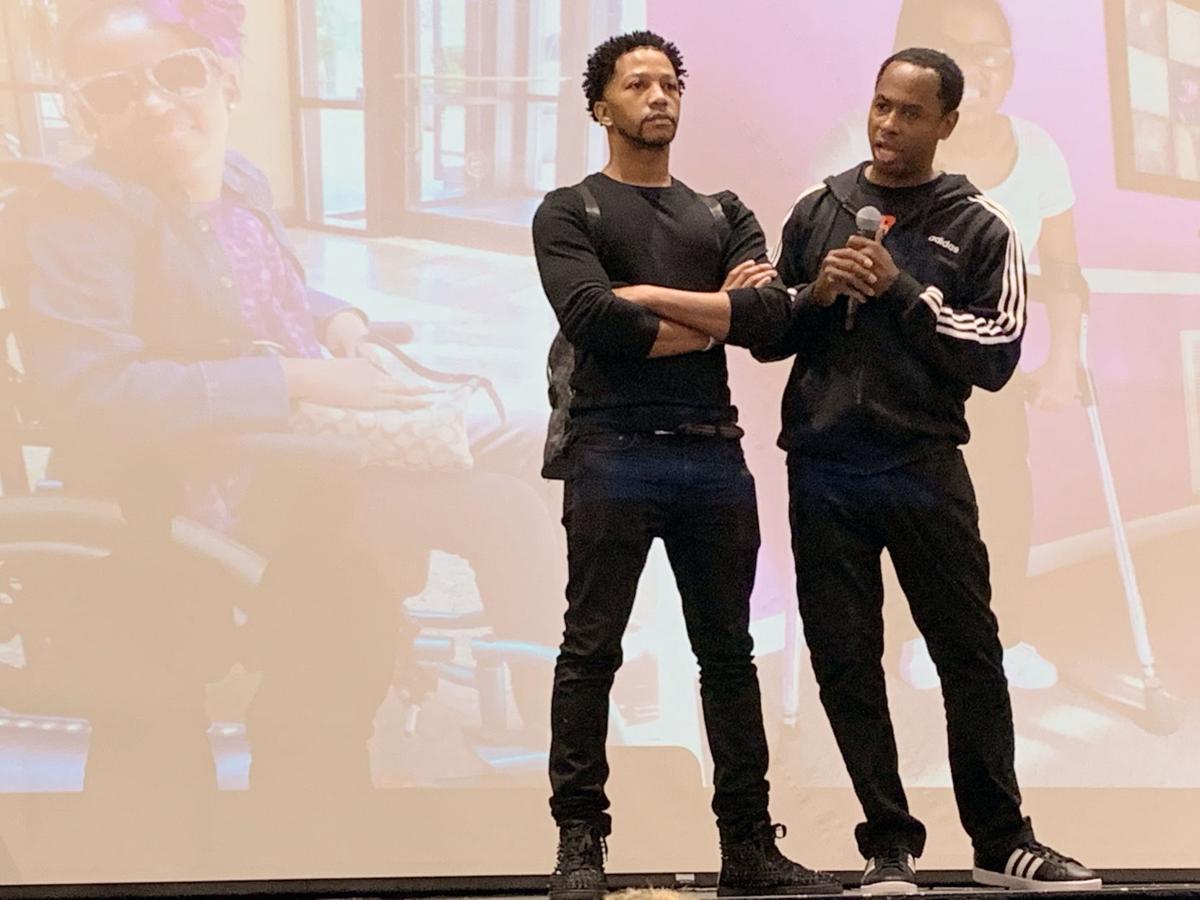 Jahzeel Mumford, left, and Dr. Adolph Brown, right, talked about Mumford's childhood as the son of a crack-addicted mother who was raised by his grandmother and mentored by Brown, whose mother was friend's with Mumford's grandmother. Mumford, a singer, dancer and actor who has performed background vocals for artists including Mariah Carey and Pharrell Williams, encouraged students to pursue their interests and dreams and disregard bullies. 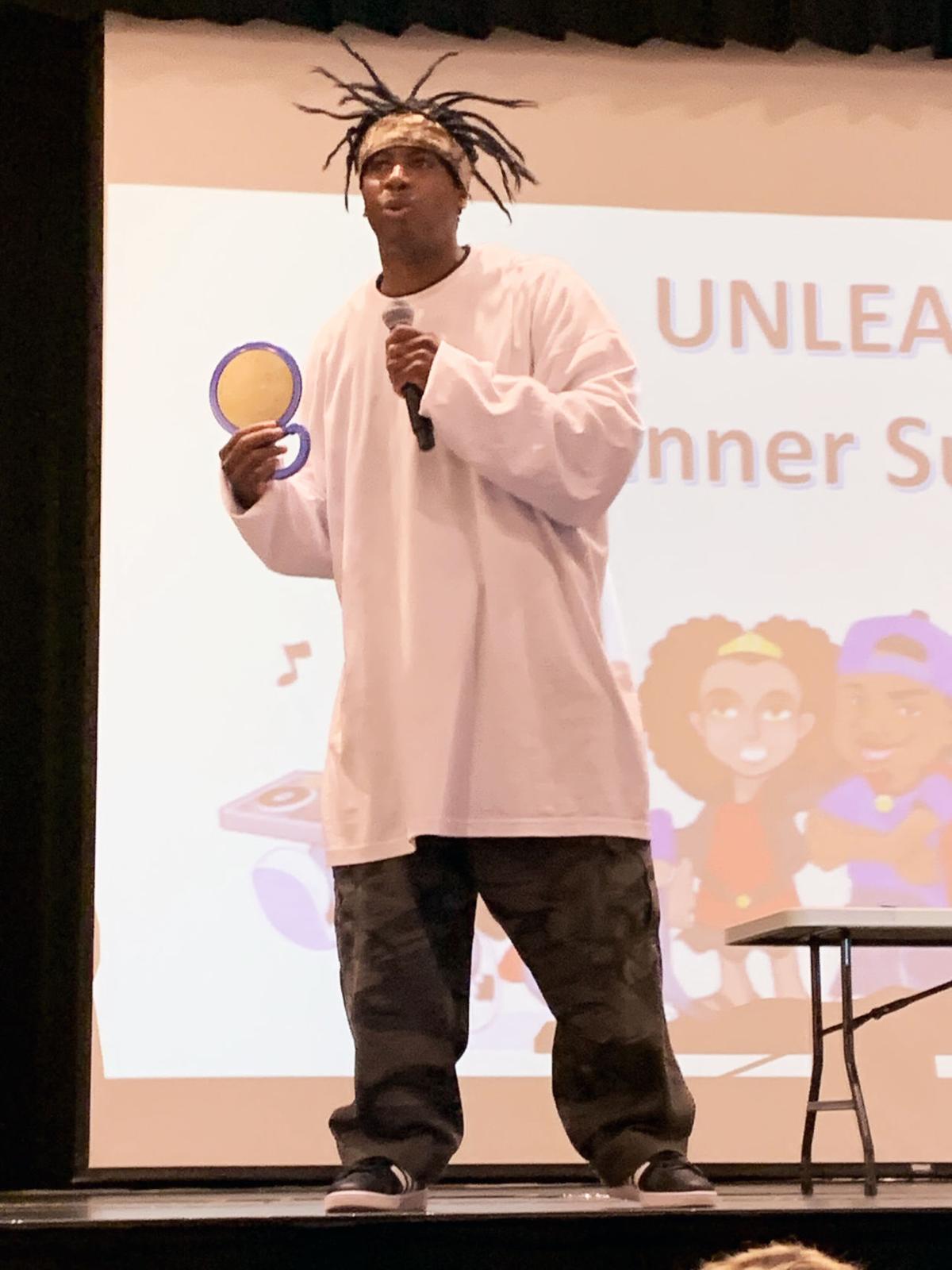 Dr. Adolph Brown, a clinical and educational psychologist, author and humorist, asked students to "look in the mirror" at Canon-McMillan High School Thursday during an assembly about diversity and inclusion. The school district is implementing long-term plans to address racism following the Mid-October release of videos in which students use racial slurs. Brown wore the wardrobe as an example of stereotypes. 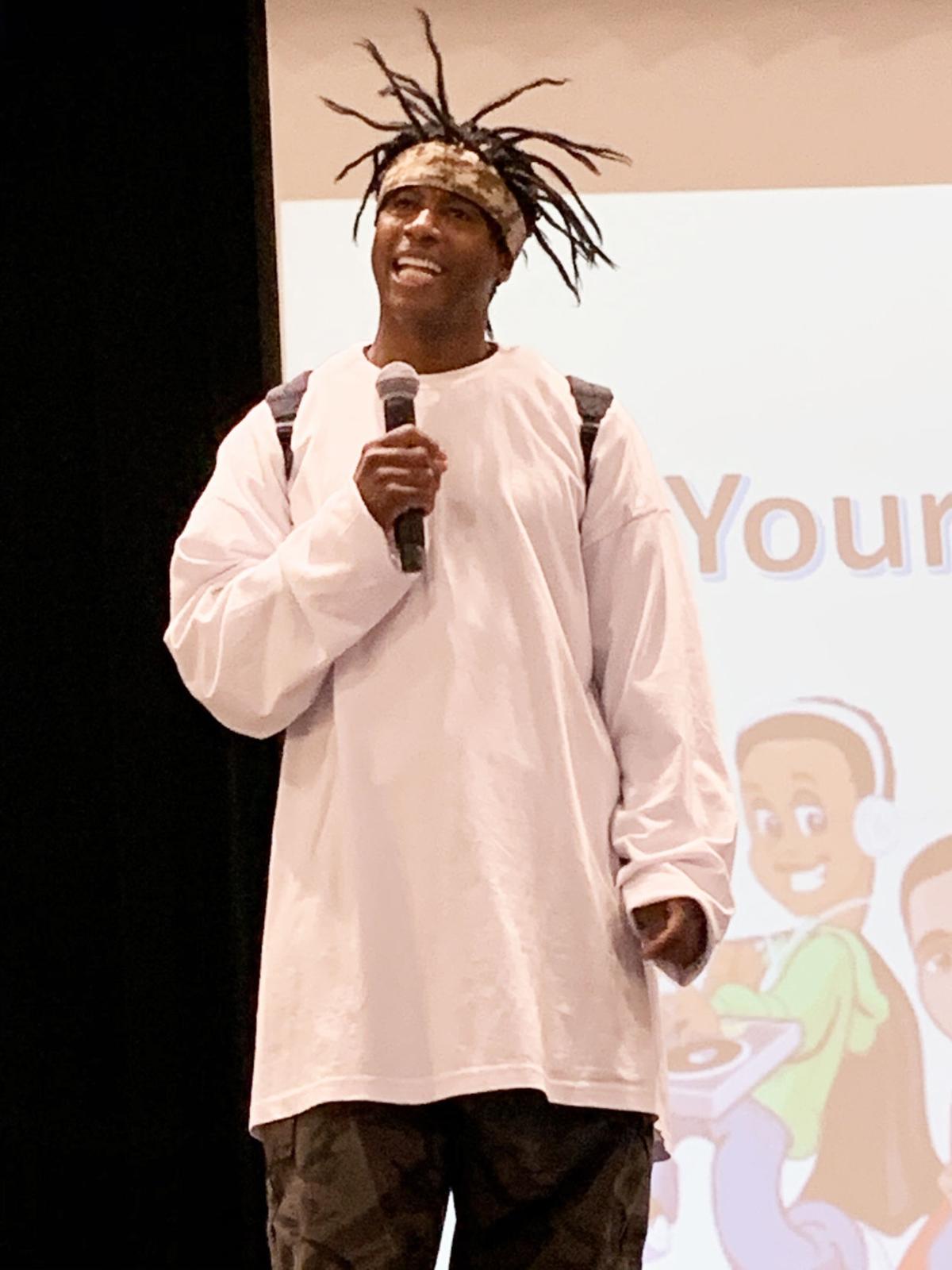 Dr. Adolph Brown talked to Canon-McMillan High School students Thursday about how words matter, and encouraged them to "protect your mouth from your brain." Brown's message encouraged kindness an inclusion and discouraged stereotyping people. 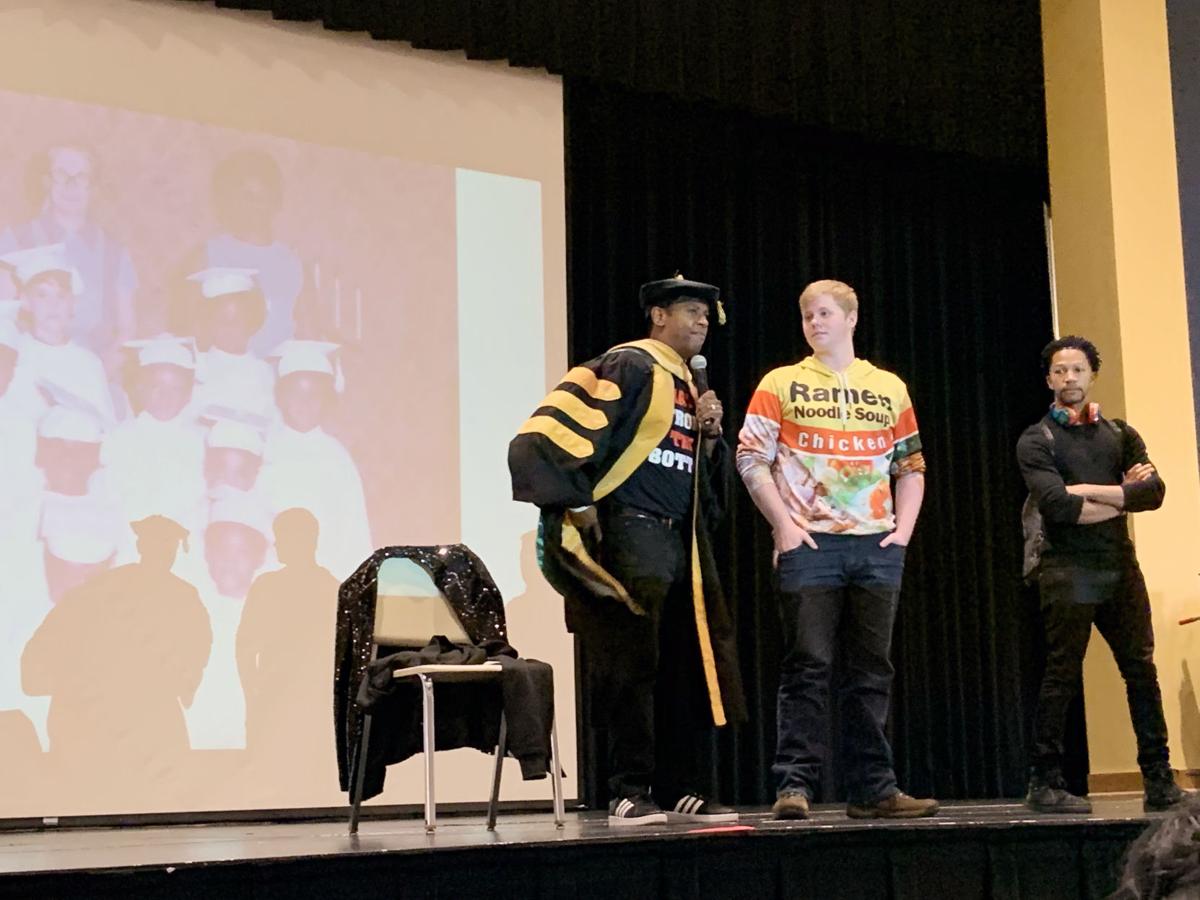 Dr. Adolph Brown, left, talks with Canon-McMillan High School student Ben Black during an assembly on Thursday. Brown conducted a demonstration in which he crumpled up and stepped on a twenty-dollar bill, and asked if anyone in the audience still wanted the cash. They did because, he noted, even though it had been damaged, the bill still held value, like people do, despite going through adversity. Brown gave Black the money. Far right is Jahzeel Mumford, a singer, dancer and actor who has appeared on Vampire Diaries. Mumford is Brown's godson and occasionally tours with him.

Jahzeel Mumford, left, and Dr. Adolph Brown, right, talked about Mumford's childhood as the son of a crack-addicted mother who was raised by his grandmother and mentored by Brown, whose mother was friend's with Mumford's grandmother. Mumford, a singer, dancer and actor who has performed background vocals for artists including Mariah Carey and Pharrell Williams, encouraged students to pursue their interests and dreams and disregard bullies.

Dr. Adolph Brown talked to Canon-McMillan High School students Thursday about how words matter, and encouraged them to "protect your mouth from your brain." Brown's message encouraged kindness an inclusion and discouraged stereotyping people.

As he mingled with students in the hallway and cafeteria at Canon-McMillan High School Thursday morning - dressed in a white, hooded sweatshirt, baggy pants and Adidas shoes, with braided hair sprouting up from a headband - Dr. Adolph Brown was mistaken by many as a new student.

But when Brown was introduced during a morning assembly - by singer, dancer and Vampire Diaries actor Jahzeel Mumford, no less - students quickly realized the "teenager" they had talked with was not a new classmate.

Brown, a master teacher, author, humorist, clinical and educational psychologist, and happily married father of eight, was invited by the school district to talk about diversity, inclusion and educational equity, following the release of a video in mid-October in which a Canon-Mac student repeatedly used a racial slur.

Brown delivered a message that words matter, and said "we have to do a better job of protecting our mouths from our brains."

"We all say stupid stuff," said Brown. "But just because you mess up doesn't mean you have to give up."

Brown explained to the students that he began to dress "like a bad rapper"  following the murder of his older brother, Oscar, a high school state wrestling champion, when Brown was 11 years old.

His brother's death, which came nine years after his father left the family, caused Brown to withdraw, and he felt people wouldn't bother him if he dressed that way.

But, despite growing up poor, Brown said people in his life - a strong mother, teachers and his grandfather among them - provided encouragement and cheered for him to succeed.

And their support helped him transform and let go of his baggage.

To the students' delight, Brown "transformed" on stage. With Michael Jackson's "Man in the Mirror" playing, Brown shed his baggy clothing and ripped off his wig to reveal a trim, muscular, neatly coiffed man.

He wore a black T-shirt that said, "I started from the bottom, but I didn't stay there."

"Are you ready to look in your mirror and get rid of anything that's keeping you from being the best person that you can be?" he asked. "Are you ready to stop doing what I call 'lazy thinking' -  letting television, music and other people tell you what to believe?"

He encouraged students to "challenge what you think because you might believe things that are wrong."

Brown presented students with what he called the "three ups," rules to help them live their best lives: show up, lift someone up, and level up - which he described as "being your best self."

He also directed students to be kind, something his grandfather, who was his role model, encouraged.

"My grandfather said the most important thing is being good people," said Brown. "When I was younger, I didn't know what I wanted to be, but I did know I was going to be a good person, a kind person, that I would try to uplift, that I'd try to make whatever place I was in better. I'm most proud that I have eight very kind children."

Brown noted a difference between niceness and kindness. Nice, he said, is reactive, so if someone is nice to you, you are nice to them.

Kindness is proactive, an "unconditional positive human regard, just because."

He also encouraged students to talk to people in order to get to know them, instead of lumping them into stereotypes.

While still dressed in his baggy clothing, Brown asked a student wearing a camouflage sweatshirt to stand beside him.

"You might look at us and we look like we're from different worlds. But I've been a hunter all my life," said Brown. "If we were on TV, we'd be on two different stations. But listen to this: sticks and stones may break my bones, but stereotypes will kill me. We have to do our best not to stereotype people."

Brown held up a red, paper heart and tore it into pieces.

During the assembly, Brown called up freshman Logan Blue, whom he acknowledged for listening intently, and while Drake's "Started from the Bottom" played, he wrapped her in his graduation cap and gown.

Said Blue, "It meant a lot. I felt like crying up there. I took a lot out of this, and I'll use a lot of what he said to us in and out of school. It's a moment I will never forget."

Mumford, whose resume includes singing background vocals for Mariah Carey, Jennifer Lopez and Pharrell Williams, also delivered a message to students about individuality and acceptance: "Always do you, boo."

Mumford's mother was addicted to crack and used it while she was pregnant with him. He was raised by his grandmother, who was close friends with Brown's mother.

Mumford told students he was bullied while growing up, and encouraged students not to let bullying discourage them from pursuing their interests.

Brown and Mumford also told students not to be the bully.

"I try to treat people better than they treat me," said Brown, who asked the students to repeat after him the word "humankind."