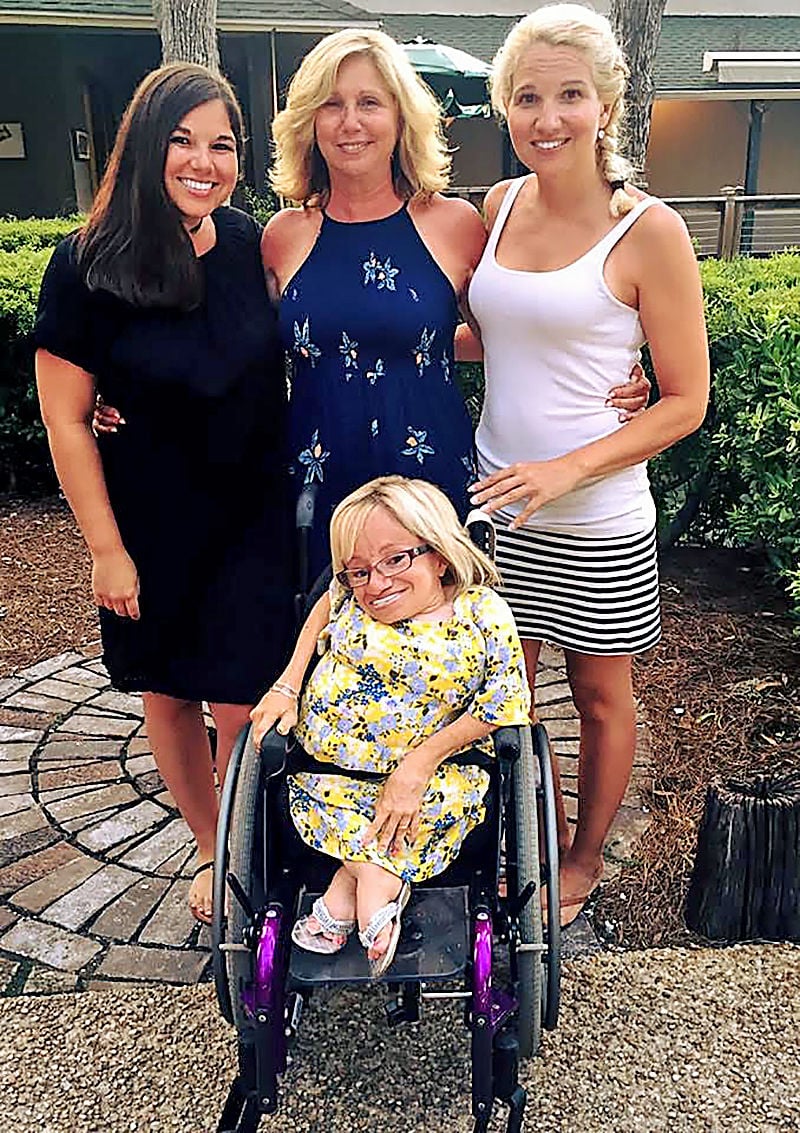 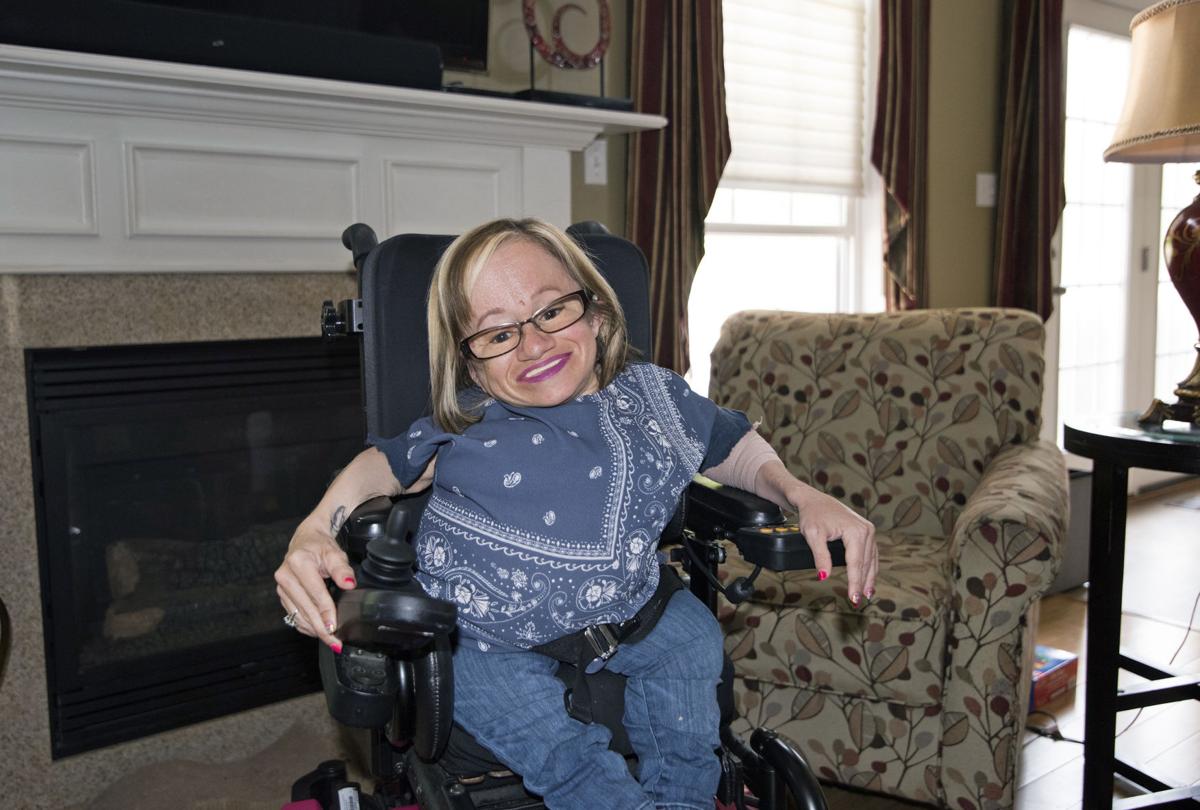 Sara Simpson at her home in McDonald 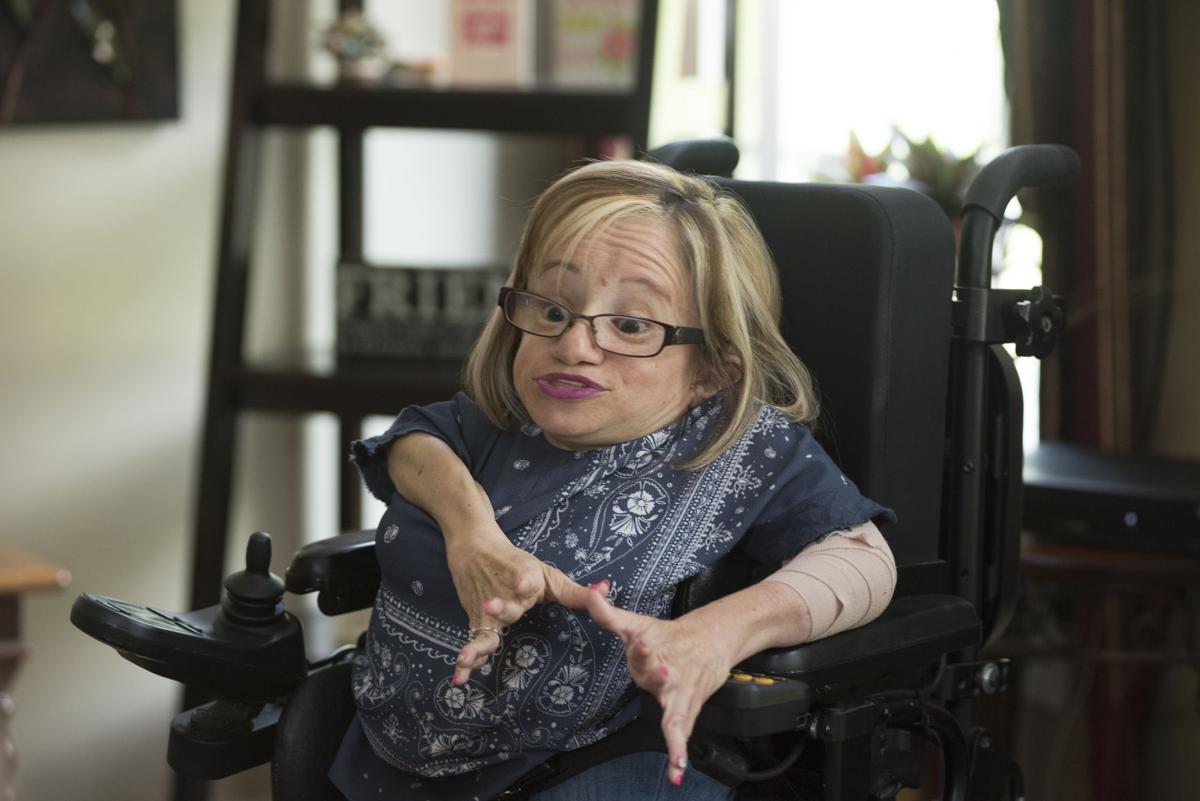 Sara Simpson talks about living with a brittle bone disease at her home in McDonald.

Sara Simpson at her home in McDonald

Sara Simpson talks about living with a brittle bone disease at her home in McDonald.

Sara Simpson missed her first day of kindergarten in 1986 because she broke her arm the day before.

But Simpson showed up the following day, and the 5-year-old confidently explained to her classmates why her arm was in a cast and why she was using a wheelchair.

The bones in her 35-pound, 2½-foot-tall body break easily. Her spirit, however, is unbreakable.

“I always stress to others to never take no for an answer, to always push yourself to be better than you were yesterday,” said Simpson. “That’s the way I’ve always lived my life.”

Simpson estimates she has broken bones in her body about 200 times.

Her ribs have snapped from coughing or turning a certain way, and when she was a little girl, Simpson broke an arm when she and her sister tugged opposite ends of a licorice stick to break it in half.

But her irrepressible optimism and tenacity have helped Simpson deal with the challenges she faces from osteogenesis imperfecta.

Simpson was the first student to graduate from Chartiers Valley School District who attended kindergarten through 12th grade in a wheelchair.

She attended Parkway West Technical School, where she earned certification in airline travel and tourism, and when she graduated in 1999, Simpson accepted a job with U.S. Airways in the reservations department.

In 2005, when the airline cut reservation and maintenance-related jobs, Simpson accepted a job at FedEx, where she has worked for the past 14 years.

“My philosophy is, design a life that you love. That’s my motto. I have designed a life that I love,” said Simpson. “It’s just really important for people to play the hand they’re dealt. You know, my cards may have been crappy at times, but I’ve always played the hand, and I think I’ve played it well.”

There is no cure for osteogenesis imperfecta. The Osteogenesis Imperfecta Foundation estimates 25,000 to 50,000 people in the United States have brittle bone disease, which is caused by a defect in the gene that produces collagen, a protein necessary to create bones.

Simpson suffers from type 3, one of the most severe types of OI. She also has hearing loss and mitrovalve prolapse, and arthritis is starting to deteriorate her joints.

She recalled a time when Simpson asked to go to school after breaking her legs, and how Simpson enthusiastically cheered on her sisters and her friends at school activities.

“She never envied her sisters for what they were able to do. She was their biggest fan,” said Lisa, her voice breaking. “With her girlfriends, too, she was so supportive. Never, ever did you hear her say, ‘Why me?’ or ‘Why can’t I do that?’ Never in a million years, which I think makes me the proudest of her.”

Simpson was born April 3, 1981, with multiple fractures, including her ribs, clavicle, arm and skull.

Those broken bones led a pediatrician who examined Simpson at St. Clair Hospital shortly after delivery to the rare diagnosis.

Simpson spent the first month of her life at Children’s Hospital in Pittsburgh.

Since then, she has undergone several surgeries in which doctors inserted rods in her bones in an effort to help her limbs grow straight.

Because of Simpson’s diminutive size and the rarity of her condition, she still undergoes treatment at Children’s Hospital, where her orthopedic doctor and interdisciplinary team have played a vital role in her journey.

Simpson credits her mother and her father, Bruce, who died in 2015 from Parkinson’s disease, for encouraging her to be independent and to always work hard.

“I am who I am because of them,” said Simpson. “My parents had the same expectations for me as they did my sisters. When I was 16, I got a job at a travel agency because my parents said, ‘Your sister worked when she turned 16.’ I got disciplined when I needed disciplined.”

Simpson, upbeat and outgoing, is surrounded by close-knit family and a wide circle of friends.

Simpson shares a home with her mother, and spends time with her sisters, Juliana Meehan and Kelly Fritz, and seven nieces and nephews (the younger ones jump on the back of her hot pink wheelchair for rides).

She enjoys dining out with friends and shopping, but traveling with family and friends is Simpson’s passion.

She flew frequently with friends when she worked for U.S. Airways, with few modifications, and still flies to visit friends across the country.

Every summer, Simpson’s family takes a beach vacation – her mother, sisters, brothers-in-law and nieces and nephews rent a beach house, a long-standing tradition.

“Even if I have a cast on or an injury, I still make the most of it,” said Simpson.

Simpson has always made friends easily, but Sara Beerhalter of McDonald has been her best friend since the two met in kindergarten.

Friends call them “Big Sara” and “Little Sara” (at 5-feet 8-inches tall, Beerhalter towers over Simpson), and Simpson is godmother to Beerhalter’s 5- and 7-year-old sons.

“She’s like a sister to me,” said Beerhalter. “I don’t see Sara as a person with a physical disability. She’s just my friend who I’ve had for a very long time. (OI) has always been a part of her, and I don’t think twice about it.”

Beerhalter marvels at how Simpson has never allowed OI or setbacks to slow her.

She shared an anecdote about Simpson’s toughness.

“I met her at the hospital once after she had broken another bone. And she kept saying to me, ‘Don’t let them cut my jeans off, these are my favorite pair,’” recalled Beerhalter, laughing.

The past few years have been physically challenging and frustrating for Simpson. A rod in her left arm, which she broke in 2007, dislodged, causing excruciating pain. In 2016, she underwent surgery to have a plate inserted, and has since undergone multiple surgeries to remove the plate, insert a rod and then replace the rod. Now, the rod is loose again.

In January, she fractured her pelvis.

“Physically, it’s been a rough go lately,” said Simpson. “As I get older, I’m taking more hits. I have such a high pain tolerance, but I get sore. I persevere.”

Simpson occasionally delivers motivational speeches at schools and corporate events, sharing her story and encouraging students and adults to live their best lives.

“Having a physical disability gives me more drive and more motivation, maybe, than some. I don’t ever think there’s anything I can’t do,” said Simpson. “Just because you have limitations doesn’t mean you can’t lead a fulfilling life.”