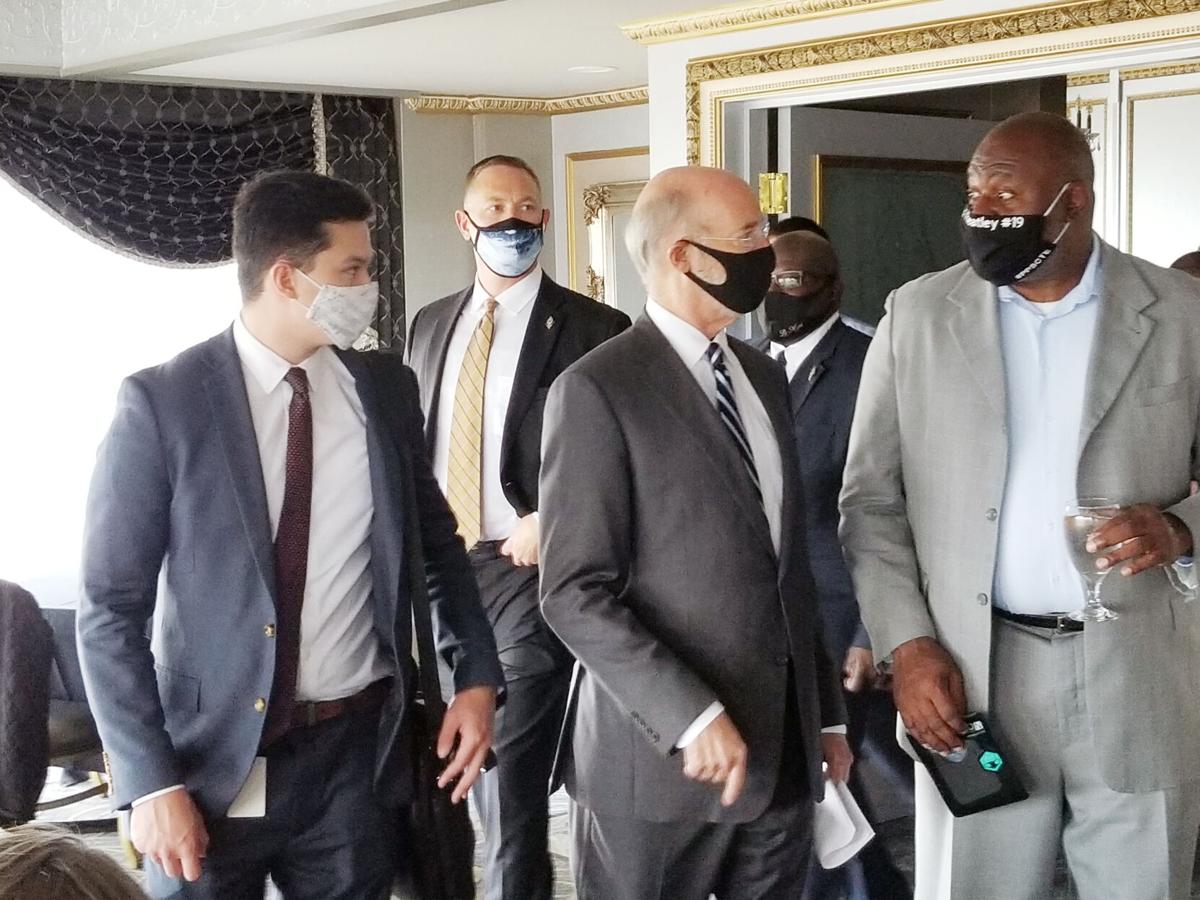 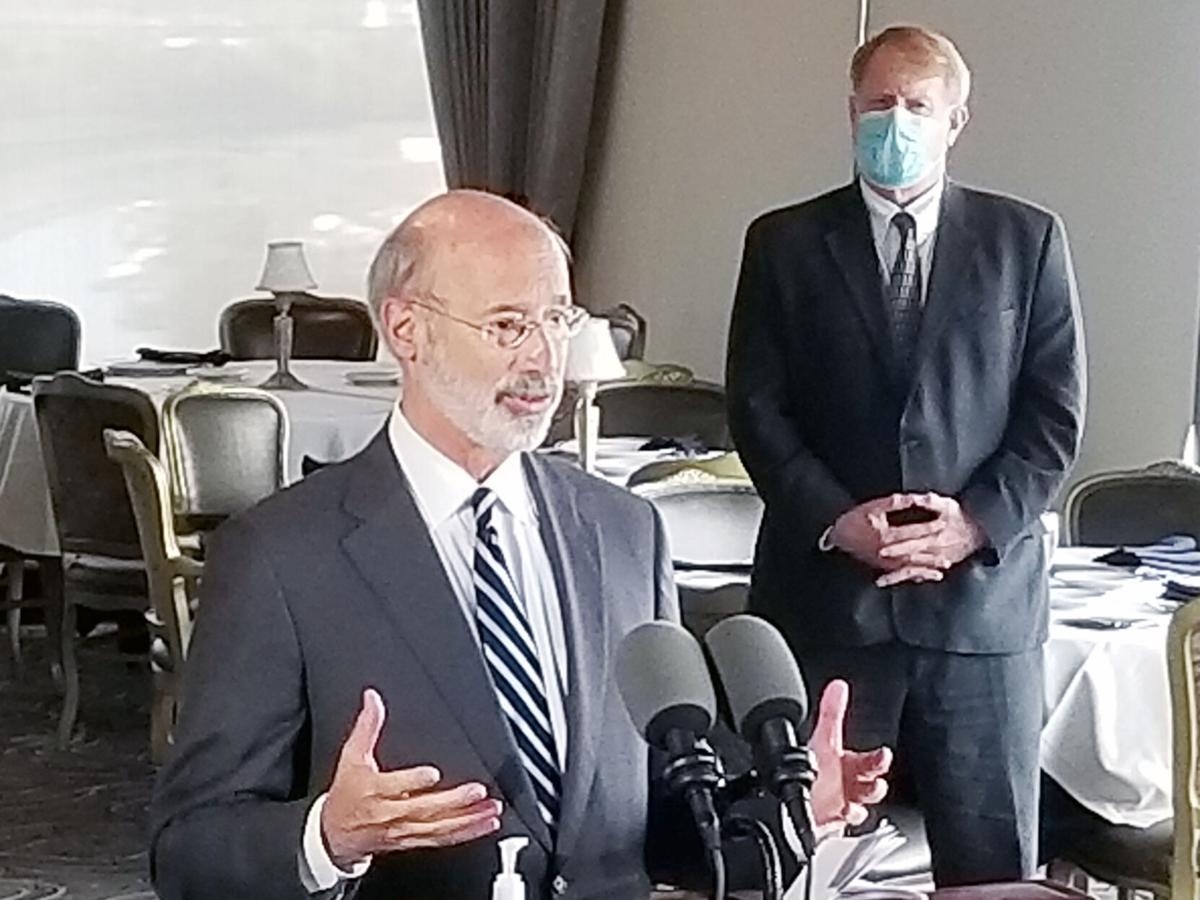 Gov. Tom Wolf speaks Thursday in the LeMont Restaurant ballroom in Pittsburgh while Allegheny County Executive Rich Fitzgerald listens to the proposal to waive next year’s liquor license fee for restaurants and bars. 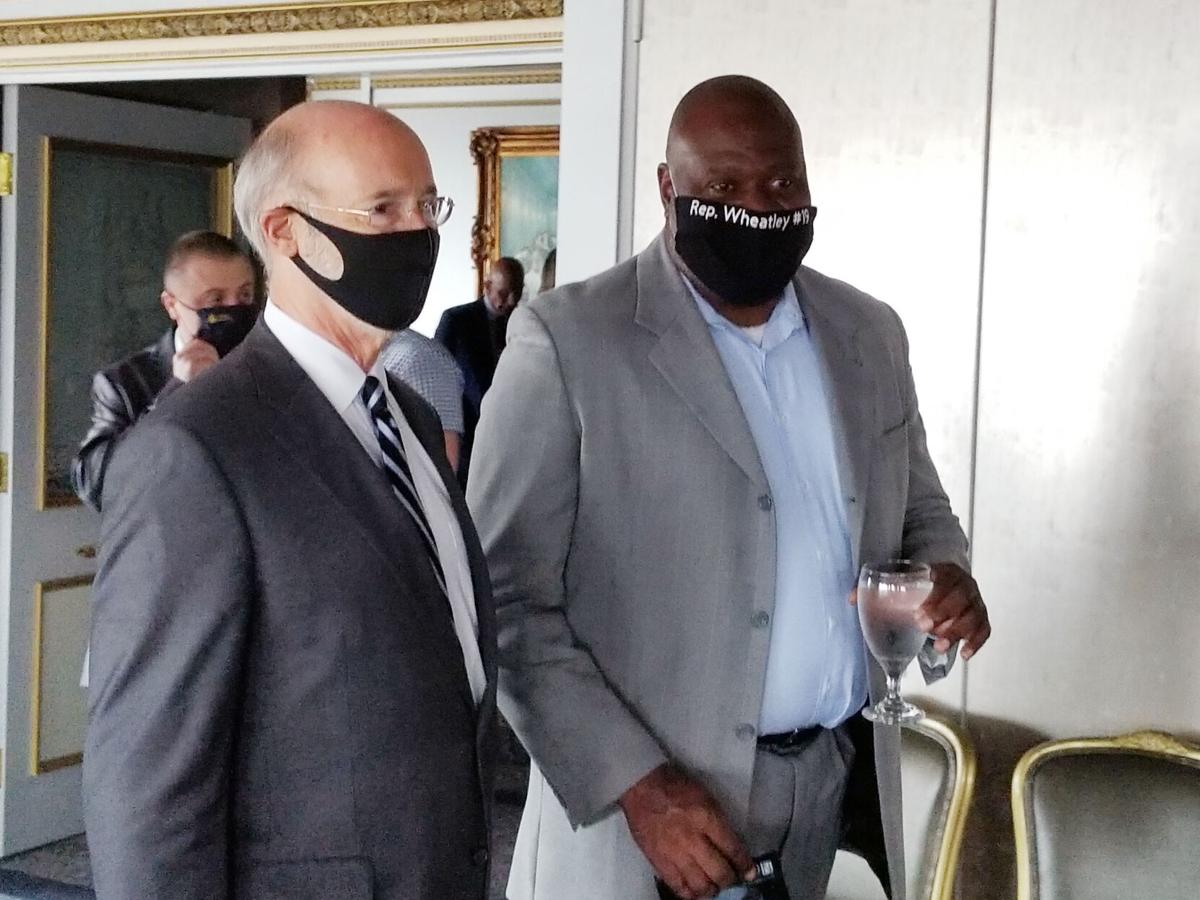 PITTSBURGH – A proposal from Gov. Tom Wolf to waive next year’s liquor license fee and direct more federal stimulus money to restaurants and bars is being viewed as a “lifeline” by some operators, while others say it falls well short of what is needed to keep them afloat during the pandemic.

Flanked by Democratic county and state officials in the LeMont Restaurant ballroom overlooking downtown Pittsburgh, Wolf said the waiver of the Pennsylvania Liquor Control Board’s annual fee would save the hospitality industry about $20 million.

Wolf also hoped to funnel some of the $1 billion in unspent CARES Act funds to restaurants and bars before a Dec. 31 deadline for its expenditure, although he did not elaborate on how he thought the money should be spent.

Wolf said “good food and good company” is central to how people live, which has taken a toll on many during the pandemic.

“It’s not a secret that the biggest challenge has been faced by the hospitality industry,” Wolf said during the Thursday afternoon press conference. “But it’s hit all of us really hard. We all like to get together for meals, and restaurants are central to that.”

But he added that the act of gathering without masks – a requirement to eat or drink inside a restaurant – easily spreads the coronavirus.

“It’s not their fault,” Wolf said. “That’s why they should not bear this (financial) pain alone.”

Wolf reiterated his support for the temporary cancellation of the state tax on alcohol, allowing alcohol to be purchased from the state “at cost” and millions of dollars in small business assistance.

The waiver of the liquor license fee would first have to be approved the PLCB, which is meeting soon to discuss the matter. The fee itself is relatively small – the LeMont on Mt. Washington pays $1,920 – but any financial assistance would help, according to Dani Fingers, the restaurant’s general manager.

“At this point, every little bit helps,” Fingers said. “We’re appreciative for that. We’ll take anything at this point.”

But Rod Ambrogi, who owns Al’s Café in Bethel Park, was upset after watching the governor’s press conference that was live-streamed on the internet. He was hoping Wolf would ease the COVID-19 restrictions that limit capacity and don’t permit people to sit at the bar.

“He’s giving us a break on something we’re never going to get,” Ambrogi said. “They have no idea what they’re doing to the restaurant industry.”

Ambrogi, who launched the Southwestern Pennsylvania Restaurant and Tavern Association over the summer to enlist other local eateries to fight the state’s restrictions, said the $1,800 waiver for his liquor license would only cover his annual garbage hauling bill. He also scoffed at the notion that CARES Act money would help the industry.

“By the time we get CARES money, we’ll be out of business,” he said.

Chuck Moran, the executive director of the Pennsylvania Licensed Beverage and Tavern Association lobbying group, agreed that the proposals did not go far enough. He hoped all licensing fees would be waived across the board and that the burdensome restrictions would be eased or lifted entirely.

“It is counterproductive to set up a system to protect people from COVID-19 if the system being built drives people to unsafe locations,” Moran said. “Because of current orders, Pennsylvanians are flocking to private parties with a false sense of safety because they are amongst people they know.”

John Longstreet, president and CEO of the Pennsylvania Restaurant & Lodging Association lobbying group, noted that the average license fee is only about $1,500 and doesn’t go far enough to cover lost revenue from the pandemic. He asked Wolf to negotiate with legislative leaders to make changes to his COVID-19 guidelines.

“If the restaurant industry is the backbone of Pennsylvania’s economy, then our governor needs to understand our backs are broken,” Longstreet said.

But not all restaurateurs were unhappy about Wolf’s plan.

Benjamin Venick, who owns Rizz’s restaurant in Uniontown, called the roughly $1,000 liquor license fee waiver a “lifeline” that could pay for a week of food orders.

“That’s huge,” Venick said when he learned about the proposal. “That just made me smile.”

The ability to continue selling alcohol is keeping his business alive, although he would also like to see alcohol taxes waived, as well.

“It would keep me afloat,” Venick said. “We’re getting by with the skin of our teeth.”

Wolf was hopeful the restrictions would eventually ease after a vaccine is circulated, and did not think the state will have to go into a more restrictive quarantine like in the spring.

“This area has done a phenomenal job with this COVID-19 crisis,” Wolf said. “No one has ever faced anything like this, and we’re doing the best we can. … We’re definitely in uncharted waters.”

Meanwhile, Ed Dunlap, an Upper St. Clair resident who owns the LeMont, said this year has been tough, but they’re looking forward to getting through the coronavirus pandemic and having a strong 2021.

“Next year, brother, we’re going to blow the roof off,” he said.