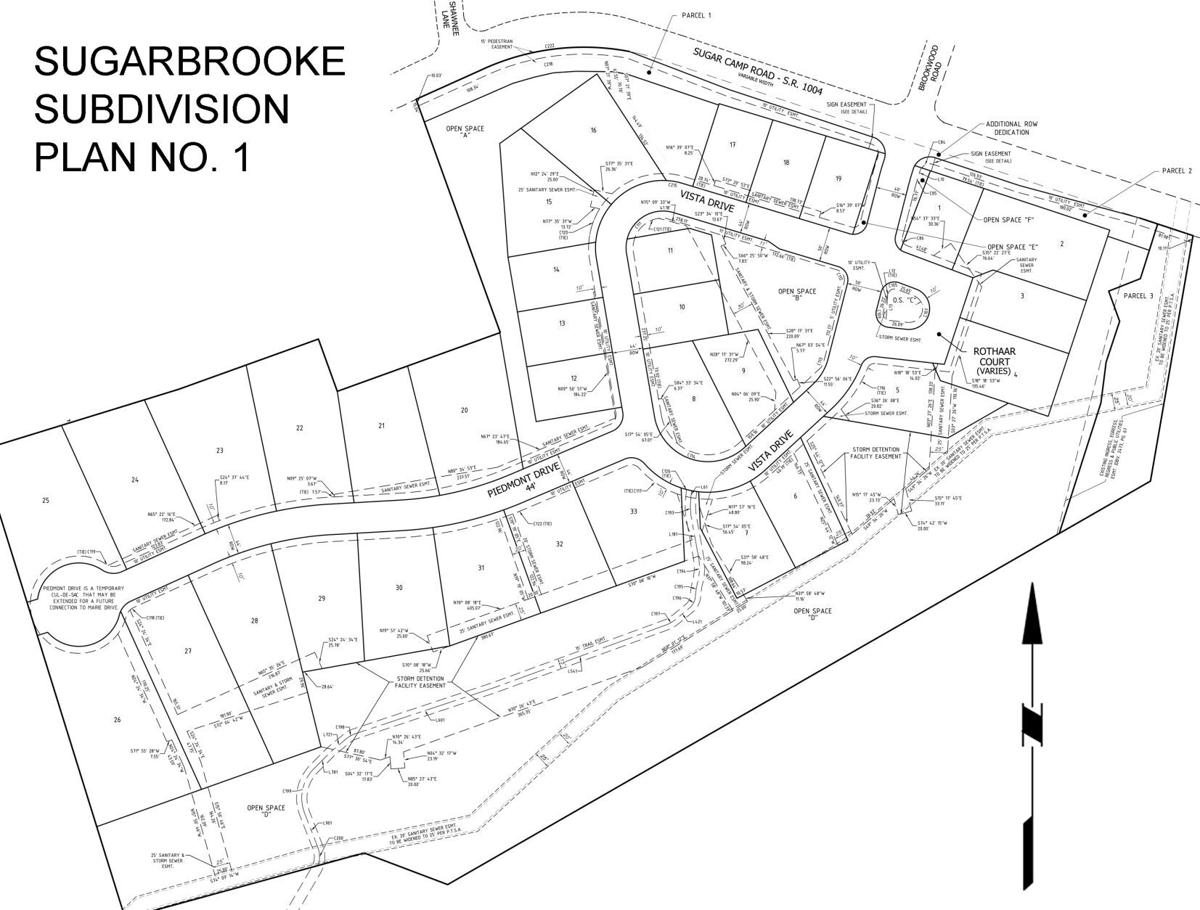 From left are the styles of homes to be constructed within Sugarbrooke: 90-foot estate, 75-foot single-family and villa.

A new residential development featuring homes starting at half a million dollars is in the works for Peters Township.

On Monday, township council unanimously approved the final plan for Sugarbrooke, to be built on a 28.6-acre parcel off Sugar Camp Road. The entrance to the development will be located directly across from Sugar Camp’s intersection with Brookwood Road.

According to information submitted to council by assistant planning director Seth Koons, developer Kinsale Land Partners LLC intends to construct 33 homes, standard single-family residences, to be priced from $700,000, and “patio homes” mostly on lots of 10,000 square feet or less, selling for $500,000-plus.

Three new roads are included in the development, Koons said, two of which are loops within the plan, and the third is a temporary cul-de-sac at the western end of the property, designed to connect eventually with the existing Marie Drive.

Paul Lauer, township manager, said Monday the roads are on a 44-foot right of way with an 18-foot paved cartway.

“This is that narrow street, that specification that we’re going to be changing,” he said. “But they’re developing it under the current regulations, which they are permitted to do.”

Council member Monica Merrell expressed concern about visiting motorists parking on the streets and the impact on vehicles navigating them safely.

Along with increasing the minimum street width, township staff members also are working on addressing the parking issue.

“We’re going to look at changing the ordinance and requiring a guest-parking ratio for these types of developments,” planning director Ed Zuk said.

Kinsale Land Partners, which has a contract for purchase of the property, plans to give to the township a strip along Sugar Camp Road, to provide additional right of way for a possible Pennsylvania Department of Transportation project to build turning lanes to accommodate Brookwood Road traffic.

Indicated on plans for Sugarbrooke is a trail connection through the township property linking Sugar Camp to an interior recreational path.

“I’m going to suggest to you that we ought not show an easement on this tract of land,” Lauer told council. “I think it may complicate things later, if and when PennDOT does a project on Sugar Camp Road.”

Plans also call for the Sugarbrooke trail to link with the township-owned Arrowhead Trail at Peterswood Park.

“It needs to go through an additional piece of property,” Lauer said about a future connection, “and at some point in time, that’s going to come back to council.”

Council members pointed out Sugarbrooke is proposed for one of the least topographically challenged parts of the township, and the relative flatness would appear to be an advantage with regard to financial outlay.

“It isn’t what it costs to develop it,” Lauer said. “It’s what you can afford to sell it for and have a product that people want. And I think they’re in a price range that has been demonstrated over and over again in Peters Township, people are willing to pay.”