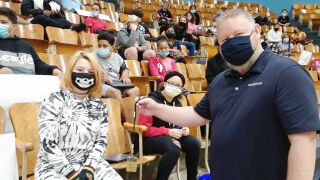 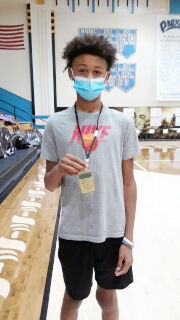 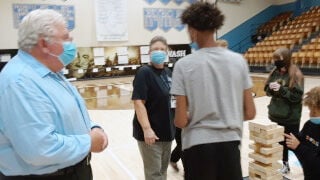 Eighth grader Tristan Reed receives one of the first reward tickets as the PBIS kicked off in late September.

Eighth grader Tristan Reed receives one of the first reward tickets as the PBIS kicked off in late September.

In 2019, the junior high received a $10,000 grant from Budd Baer Subaru as part of the Subaru Loves Learning and Adoptaclassroom partnership. The grant helps recipient schools implement the Positive Behavior Intervention Support program, which teaches positive behavior and decision-making.

The program was scheduled to start last year but, because learning moved online during the pandemic, Washington School District waited for a return to the classroom before kicking off PBIS.

The concepts of PBIS – how to interact with and include others and how to make good choices – can be geared toward students K-12. Washington School District is debuting the program to its seventh- and eight graders – with a Prexie twist.

The program began officially Sept. 28 with an assembly attended by Mark Baer and his son-in-law, collision manager Greg McVicker.

Students played Jenga and competed in relay races while Baer and McVicker cheered them on. Trivia was also on the schedule, and the school’s guests handed out tickets to students modeling PBIS behavior.

“Prexie Pride” serves as the basis of the program, developed by Intermediate Unit 1. The school’s tagline teaches students how to be prepared, responsible, inclusive, danger-free and engaged.

Devon Strimel, who teaches at the junior high school, said in a news release PBIS will bridge the social and emotional gap between elementary and high school and hopes students come away from the program with more awareness of their surroundings.

One of the benefits of PBIS is that “kids get a chance to grow and learn from their mistakes and to make better choices,” said Diana Fronzaglio, who is teaching the program alongside Strimel.

Both teachers view PBIS as an extension of superintendent Dr. James Konrad’s initiative to incorporate social and emotional learning into the curriculum.

The school will host Budd Baer Subaru for future events and to monitor the effectiveness of the grant to the district.