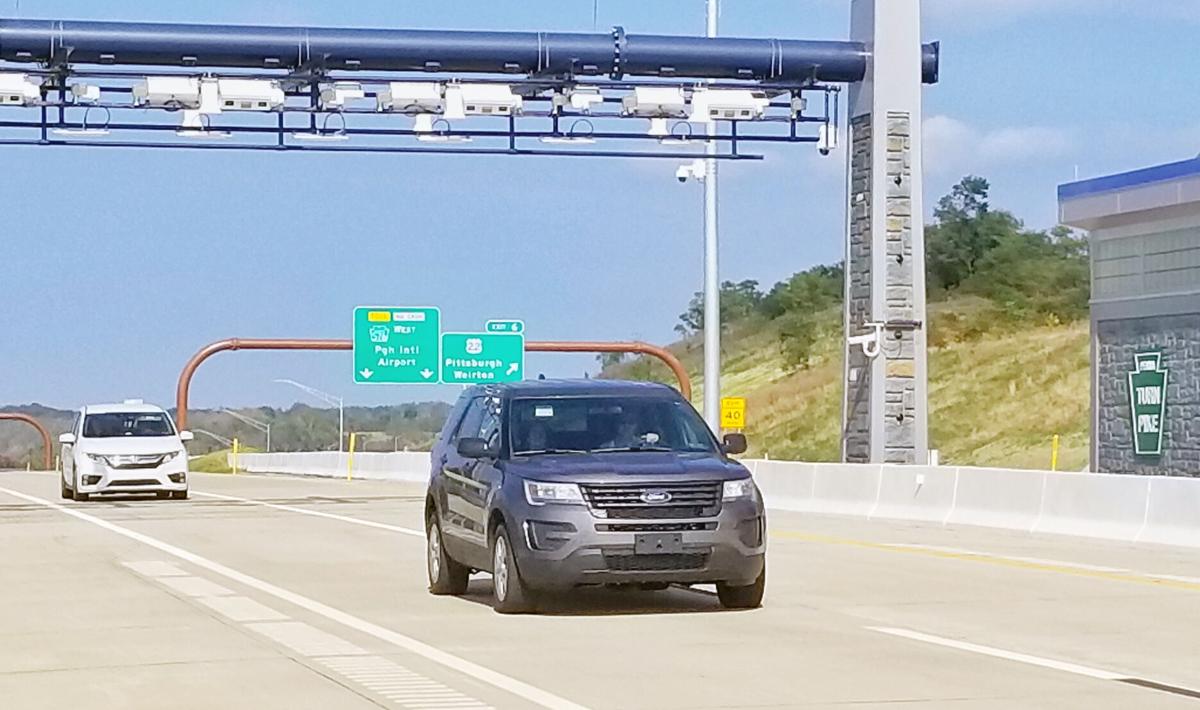 Vehicles pass through a tolling gantry on the new Southern Beltway in Robinson Township. 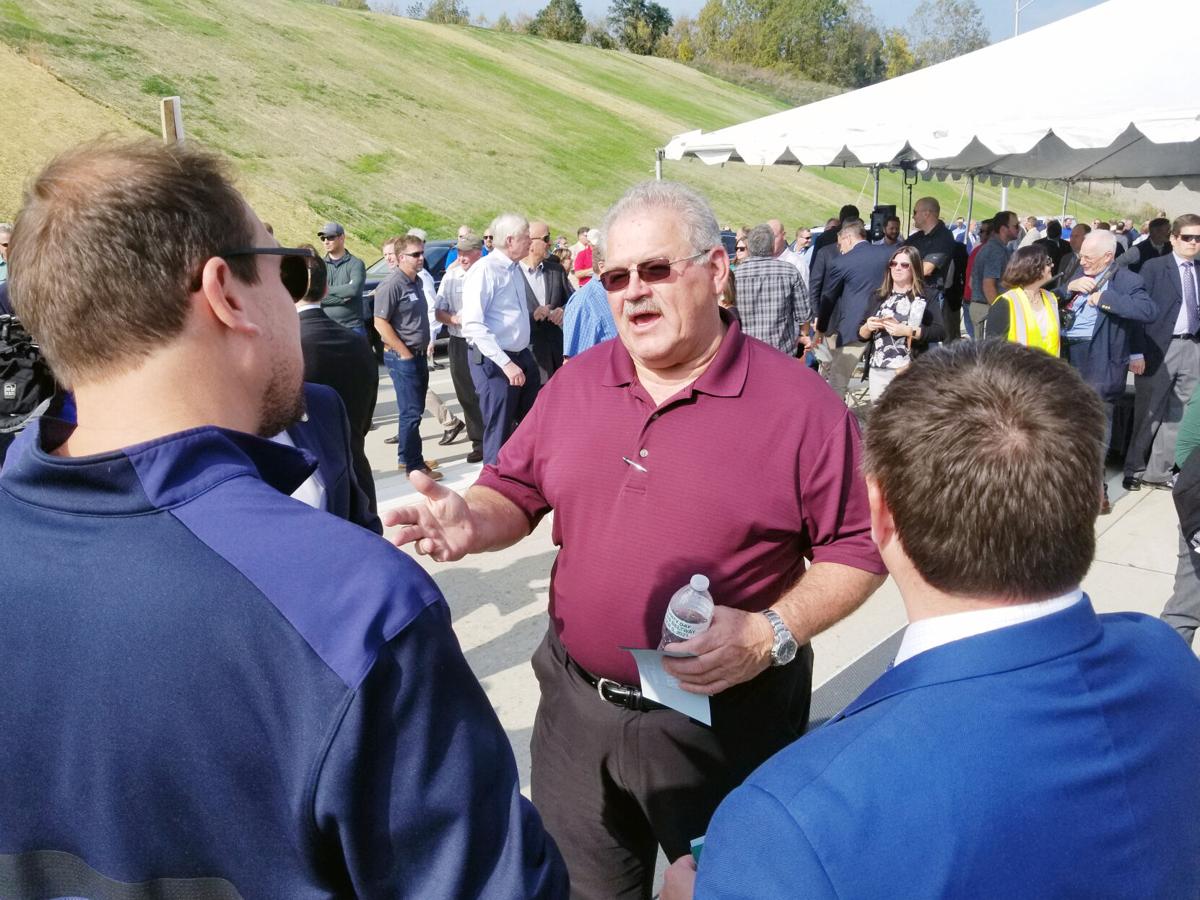 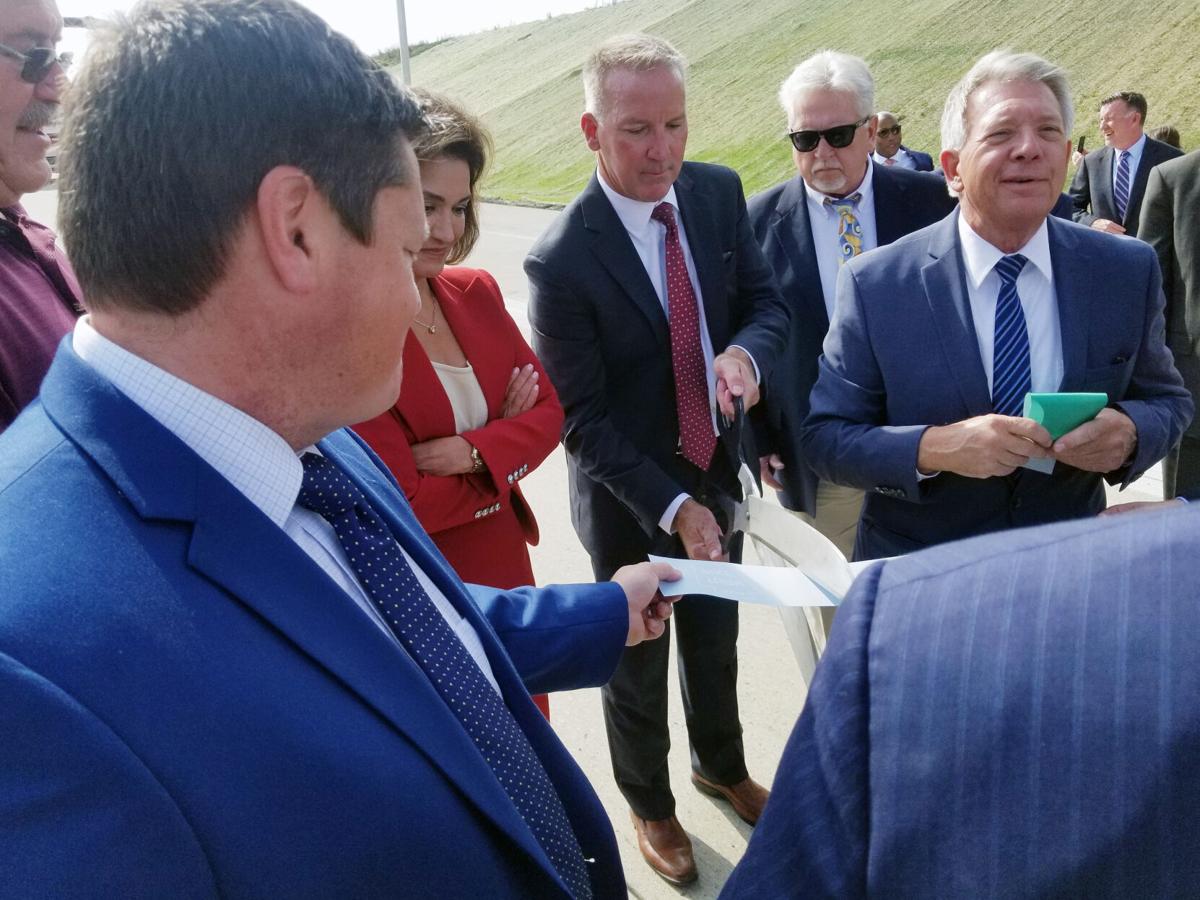 Vehicles pass through a tolling gantry on the new Southern Beltway in Robinson Township.

The Southern Beltway, a highway project decades in the making, just couldn’t wait any longer to open.

As Pennsylvania Turnpike CEO Mark Compton was detailing the lengthy history to build the toll road during Thursday’s ribbon-cutting ceremony, a gust of wind blew over the stanchions holding the green fabric behind him, severing the ribbon prematurely.

“Hey, the ribbon’s cut!” a guest in the audience shouted.

“It was ahead of schedule!” another guest responded about the project’s long-awaited opening.

The 13-mile highway will open to traffic later this afternoon with all exits accessible except for two ramps at the interchange with Interstate 79. The highway will take traffic from near the Southpointe exit to the six-mile Findlay Connectors that leads directly to Pittsburgh International Airport. Traffic traveling north on I-79 from Canonsburg toward the Southern Beltway and vehicles traveling east on the toll road merging south onto the interstate will be able to use the ramps, while the other ramps on the north will be ready by Memorial Day.

The new toll road and Findlay Connector will merge onto the Beaver Valley Expressway along Interstate 376, offering a 72-mile highway from I-79 near Southpointe to Interstate 80 in Mercer County.

“Thanks to the Southern Beltway, this corridor is connected,” Compton said.

Compton talked about the numerous obstacles the Turnpike Commission faced not only securing the funding for the $900 million toll road that took seven years to build, but unprecedented obstacles such as flash flooding near work sites and a global pandemic that temporarily halted construction. That was a theme echoed by many speakers at the ceremony held in the eastbound lanes of the highway in Robinson Township near its connection with Route 22.

“This day has been decades in the making,” said state Department of Transportation Secretary Yassmin Gramian, who also chairs the Pennsylvania Turnpike Commission. “We don’t see any brand new highways anymore.”

The long and winding road to build the Southern Beltway goes back to the 1970s when it was considered as part of the overall plan to construct a beltway around Pittsburgh. It was one of several projects included in Act 61 of 1985 passed by the state Legislature mandating the constriction of several toll roads across Pennsylvania. But while other roads were built, the Southern Beltway project languished as only a concept on paper.

That changed in 2013 with the passage of the Act 89 transportation bill that found funding to construct the highway. The Turnpike broke ground in May 2014 with the expectation it would be fully open by 2022.

“Rome wasn’t built in a day, and neither are highways,” said John Wozniak, who is leaving the Turnpike Commission after serving four years on the board.

Wozniak credited the success of the project to the bipartisan support it received in recent years to finally make it a reality. That was evident by the Democratic and Republican state lawmakers and local officials in attendance Thursday.

State Rep. Jason Ortitay, R-Cecil, recalled the numerous meetings and communication he had with his constituents and Turnpike officials about various problems. Ortitay, who took office in 2015 and represents a district that contains the entire Southern Beltway, remembered the tense meetings with McDonald area residents who were upset over water runoff near the construction site that caused flooding.

“This was a very tough project. We always knew that,” Ortitay said. “I think it shows we can get serious things done here.”

But he said the headaches and problems associated with the project will be worth it when the highway spurs economic opportunities in northern Washington County.

“This is going to spark future generation growth,” Ortitay said.

Tim Solobay, a former Democratic state legislator for the area who helped secure the funding to start building the highway, was proud to see the project completed. He also lauded his predecessor, the late Democratic state Sen. J. Barry Stout, who was a fierce proponent of area highway projects before he retired in 2011 and died five years later.

“We knew it would happen,” Solobay said. “You heard about the headaches, but there was a tremendous push.”

Solobay was excited bout the business opportunities the new toll road will afford the nearby rural communities that will be connected by a modern highway.

“It’s more than a quick trip to the airport,” he said.

The Southern Beltway is formally known as Pennsylvania Turnpike 576. The 19-mile ride from I-79 to the airport will cost $3.90 for passenger vehicles that use E-ZPass, and double that price for those vehicles that use the “Toll-By-Plate” option.