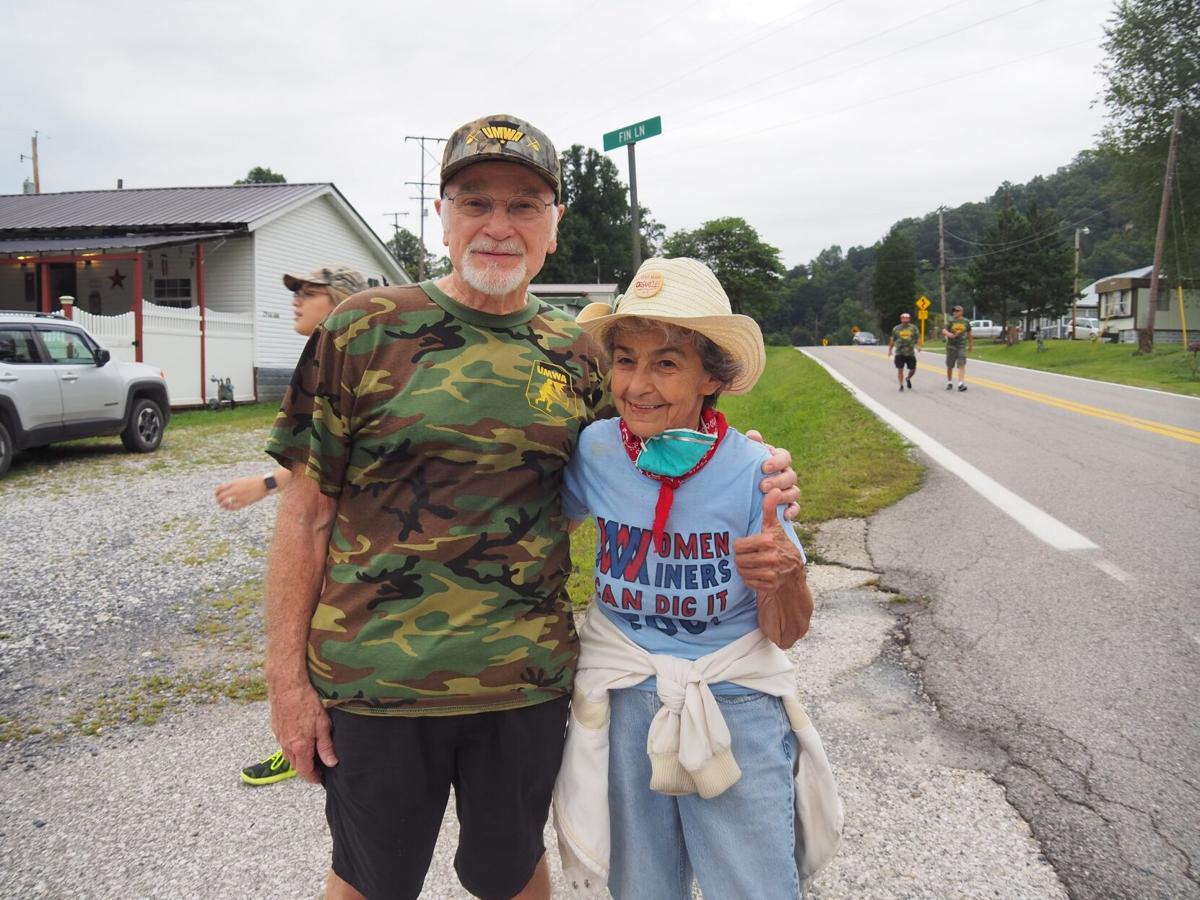 Kipp Dawson, who worked as a coal miner for Bethlehem Mines in Cokeburg, poses with UMWA President Cecil Roberts after a three-day, 38-mile march in southern West Virginia this past weekend to commemorate the 100th anniversary of the Battle of Blair Mountain. 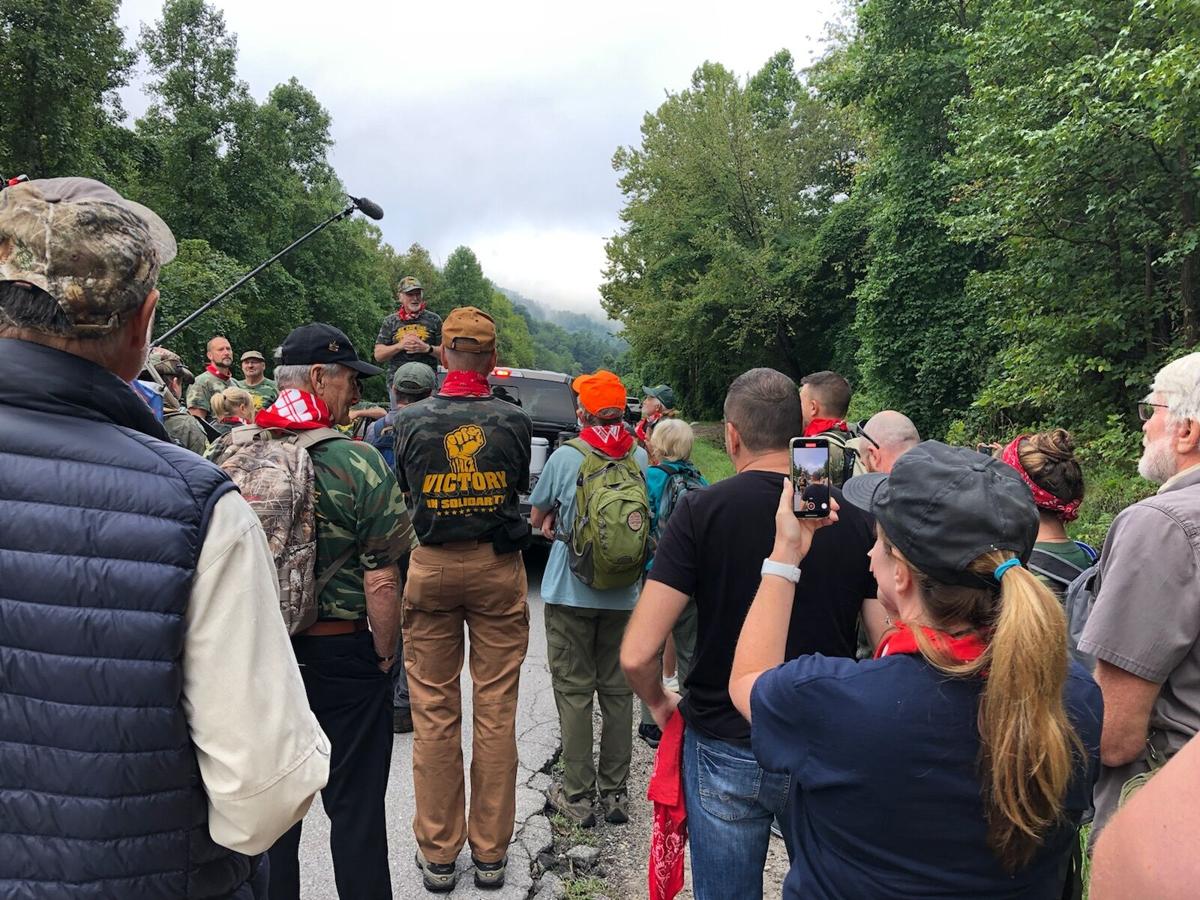 UMWA President Cecil Roberts stands on the bed of a pickup truck to speak during the 38-mile march to commemorate the 100th anniversary of the Battle of Blair Mountain in Logan County, W.Va.

Kipp Dawson, who worked as a coal miner for Bethlehem Mines in Cokeburg, poses with UMWA President Cecil Roberts after a three-day, 38-mile march in southern West Virginia this past weekend to commemorate the 100th anniversary of the Battle of Blair Mountain.

UMWA President Cecil Roberts stands on the bed of a pickup truck to speak during the 38-mile march to commemorate the 100th anniversary of the Battle of Blair Mountain in Logan County, W.Va.

After enduring a three-day march over 38 miles of mountainous terrain in southern West Virginia, Kipp Dawson felt empowered as she and countless other union miners traced the path more than 13,000 miners took a century ago during the Battle of Blair Mountain.

Dawson, 76, who worked in Bethlehem Mines Co.’s Mine 60 in Cokeburg from 1979 to 1992, followed United Mine Workers President Cecil Roberts during the Labor Day weekend event commemorating the centennial anniversary of the “Mine Wars” battle that dealt labor unions an initial blow, but eventually gave workers the strength to organize in the coming decades.

“To walk those same roads and with the same goal in mind to form a union to protect the lives of coal miners, it was almost a spiritual experience,” Dawson said. “They streamed in from different places to take the same road for the same cause.”

The story of the Battle of Blair Mountain is not as widely known, considering its historical significance.

It involved thousands of miners taking up arms in late August and early September 1921 to literally fight for better pay, more freedoms in company towns and safer working conditions. More than a hundred people died in the violence in the southern West Virginia hills, and the U.S. Army eventually was dispatched to quell the uprising. While the miners were defeated, their cause eventually gave way to the explosion in the labor movement in the 1930s amidst the Great Depression.

Dawson marched beside her longtime friend and fellow retired coal miner Libby Lindsay, and the two women thought about those who came before them and the impact of the march.

“For both of us to pick up the spirit of our forebears who made it possible for us to work safely in union mines so many years later, it was moving. It was a thank you. We were determined to keep going,” said Dawson, who left coal mining and later became a teacher in the Pittsburgh Public Schools.

Dawson traveled to the five-day event from her home in Pittsburgh with Lou Martin, an associate professor of history at Chatham University who helped to found the West Virginia Mines Wars Museum in Mingo County. Martin attended a similar event a decade ago after Blair Mountain in Logan County was removed from the National Register of Historic Places and nearly wiped off the map when plans were made for mountaintop removal coal extraction. Blair Mountain was eventually re-listed as a historic place, but Martin said the 100th anniversary celebration this past weekend in several towns from Charleston to Matewan told the story of the “culminating event” of the Mine Wars of the early 20th century.

“It’s an important chapter in West Virginia history, American labor history, and how so many of us enjoy health care, pensions, weekends and other things we take for granted,” Martin said. “We needed to restore it to its rightful place.”

Martin, 49, who grew up near Weirton, W.Va., but now lives in Beaver County, authored the book, “Smokestacks in the Hills,” telling the story about industrial workers in rural West Virginia. Martin said the Battle of Blair Mountain emboldened miners and other industrial workers to organize and take a stand as federal laws in the 1930s helped them to organize in “lightning fast” speed.

“It did end in defeat for the union miners, but it was an amazing display of solidarity across many divides: language, race and ethnicity, geography,” Martin said. “It was an illustration of what miners could do when they came together in a common cause.”

While union membership has diminished in recent decades, the fight for workers still resonates today, Martin said. He pointed to the statewide teachers strike in West Virginia in 2018 and the current push to raise the minimum wage to $15 an hour.

“It’s certainly true that labor laws have changed and undercut a lot of union protections. And it’s true union membership continues to decline overall. But we’re also in a moment over the last few years when there has been more union activity than any time I can remember,” Martin said. “The time is right for a resurgence for a labor movement. It just might not take the same form as it did in the 1930s when the miners were taking the lead.”

Martin saw that firsthand at the various events across several counties that attracted more visitors than he was expecting. Organizers set out about 20 chairs to wait for a walking tour at the Mine Wars museum in Matewan and were amazed when 120 people were standing in line waiting to attend, even attracting one visitor all the way from Alaska.

“I had high hopes and every event exceeded my expectations by a mile,” he said. “It was just an incredible thing for that many people to come to that town for that day.”

Roberts, the UMWA president, was center stage for several of the events and spoke to Dawson during various portions of the march. But Dawson was blown away when Roberts came over to her at the end of the march Sunday and asked if he could get a photograph with her while praising her UMWA Local 1197 and its leadership, calling out Mark Segedi and Gary Bostich by name.

“She comes from a strong local!” Roberts told others about 1197, which is based in Cokeburg.

“This guy is president of the whole union and would remember their names and my local,” Dawson said. “It’s a testimony to the central place that our part of the country has in coal mining history, at least in the mind of the current president.”

Experiencing the celebration surrounding the Battle of Blair Mountain and the march with other miners are memories Dawson said she will cherish forever.

“They fought and they lost some battles and they won some big ones,” Dawson said. “If we have a sense of our own history, we have some hope. Being down there gave that to me, and I’m very grateful for that.”