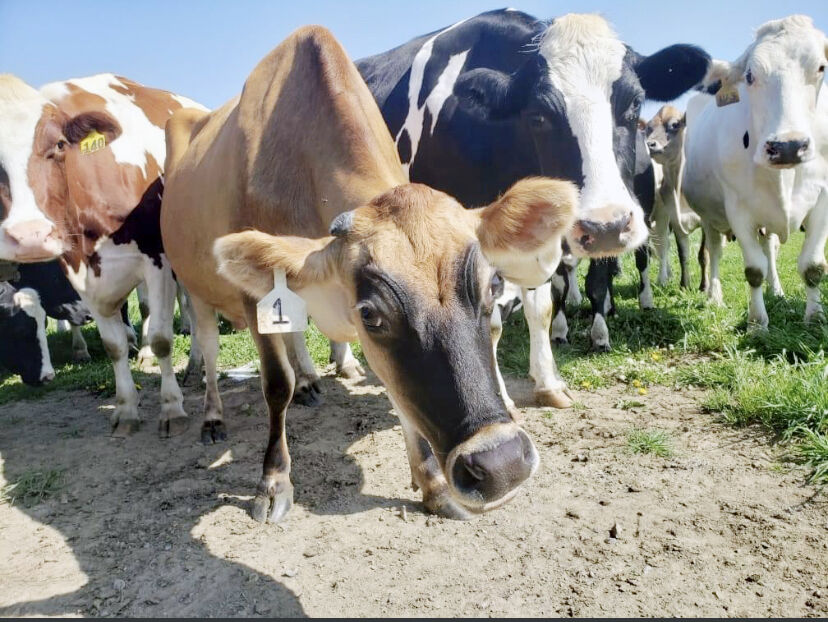 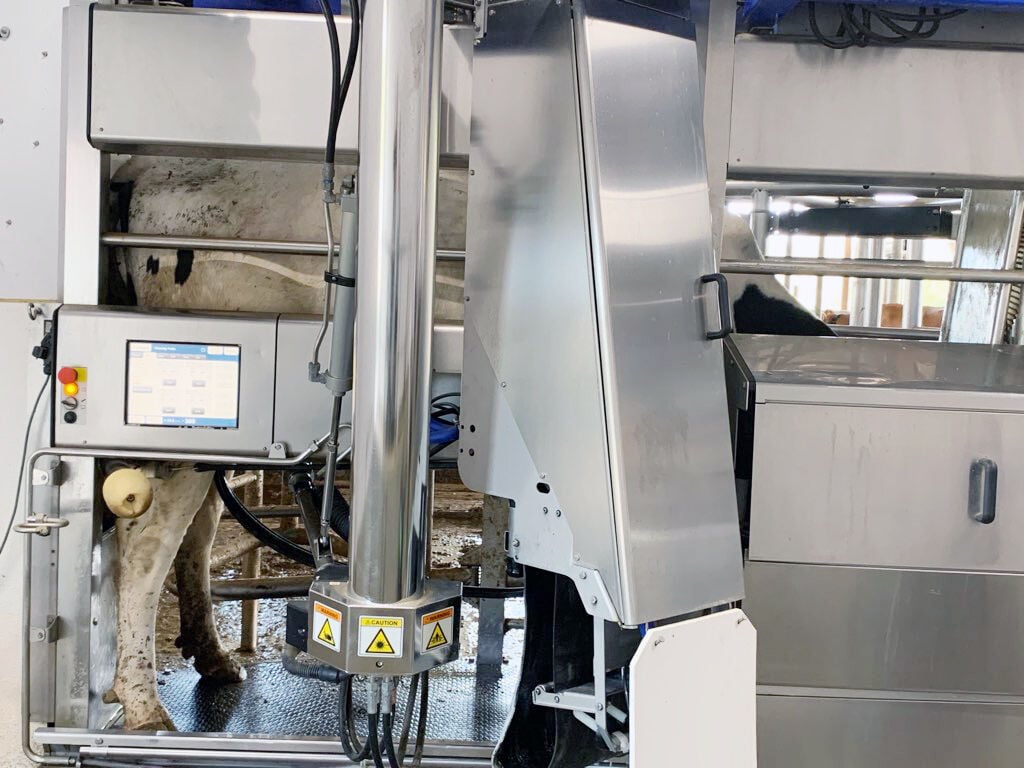 A cow is milked in the robotic milker. 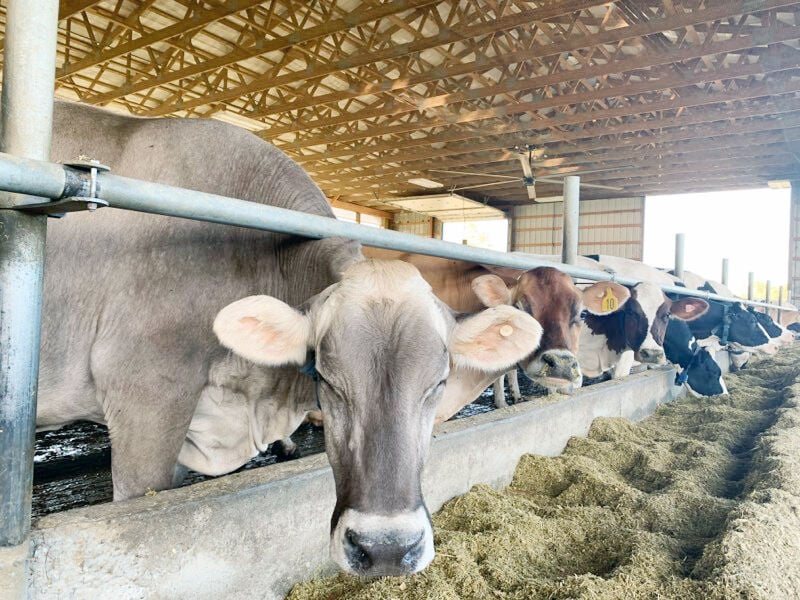 Tula is one of the 125 Jersey, Brown Swiss and Holstein cows on the Martin’s farm. 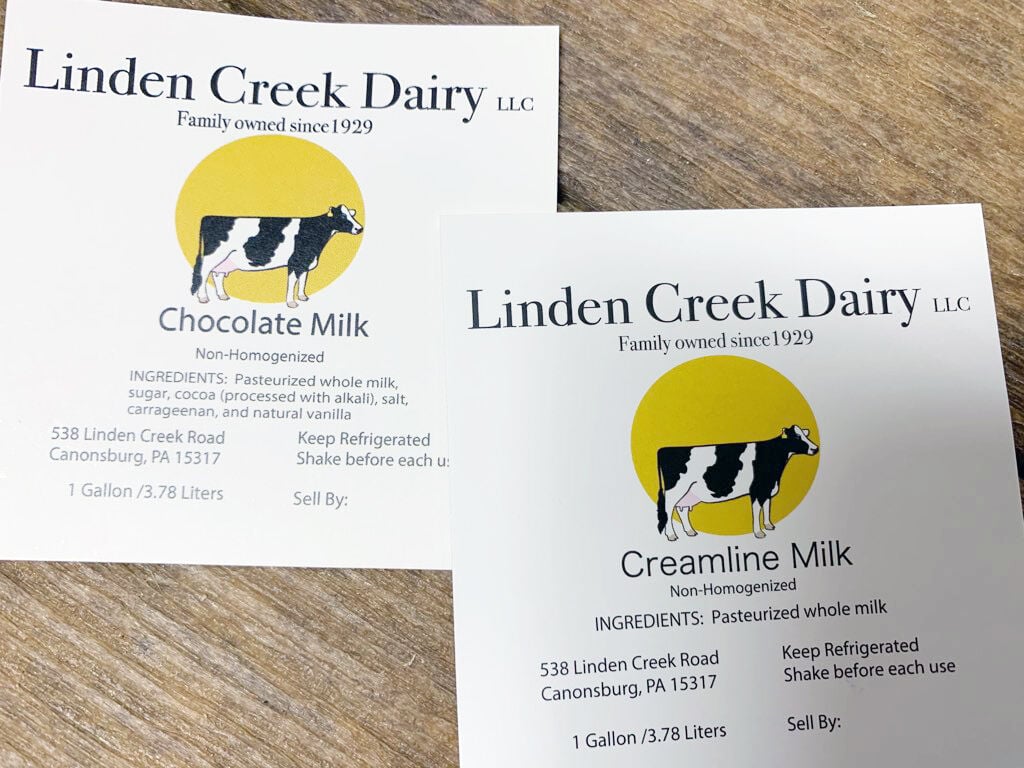 Linden Creek Dairy has been family owned since 1929. 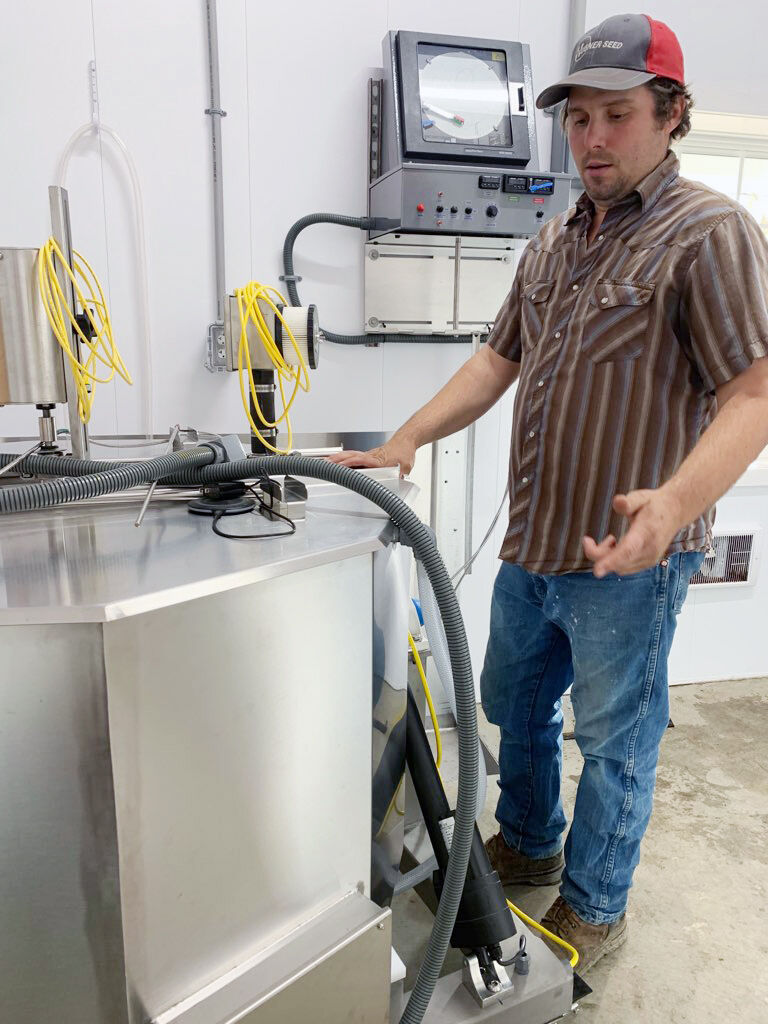 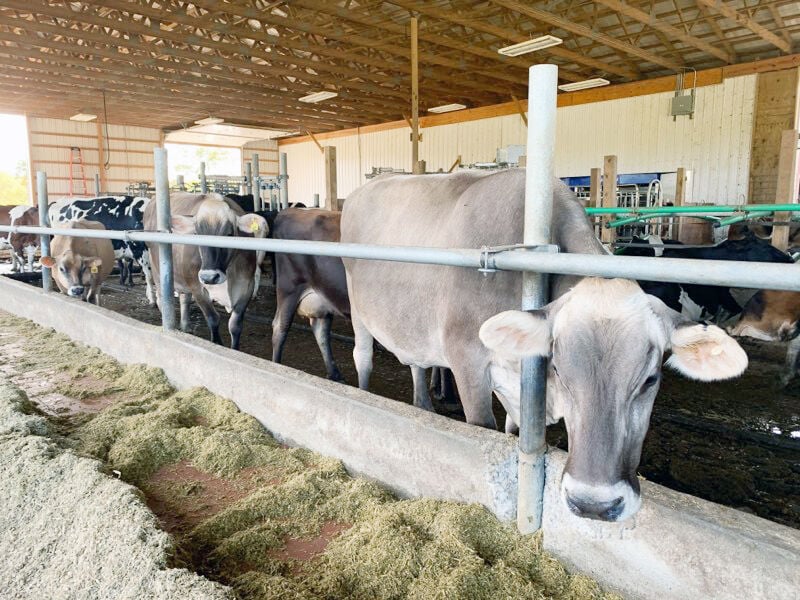 Tula is one of the 125 Jersey, Brown Swiss and Holstein cows on the Martin's farm. 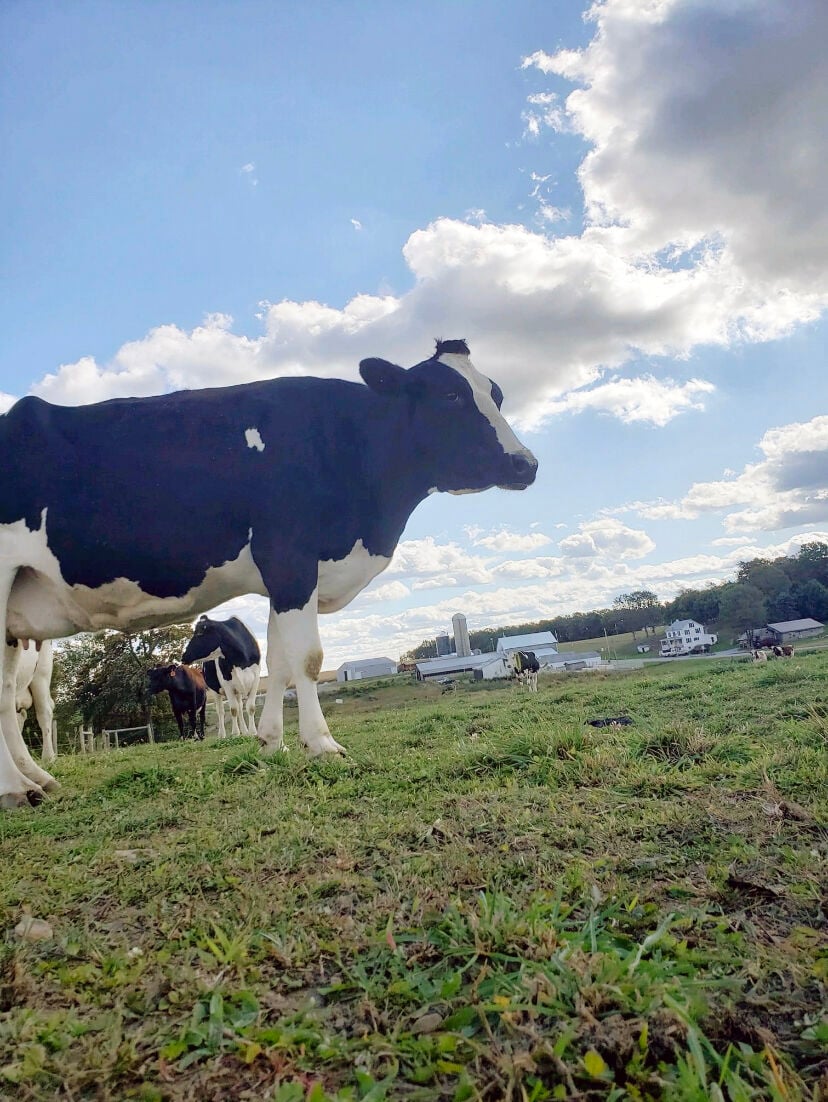 A cow is milked in the robotic milker.

Tula is one of the 125 Jersey, Brown Swiss and Holstein cows on the Martin’s farm.

Linden Creek Dairy has been family owned since 1929.

Tula is one of the 125 Jersey, Brown Swiss and Holstein cows on the Martin's farm.

The Martin Family is “udderly” delighted about the newest venture at its Linden Creek Dairy Farm: bottling and selling creamline milk.

The North Strabane Township dairy farm, owned and operated by the Martin family for nearly 100 years, has undergone a recent expansion that included remodeling the milk facility, installing robotic milkers, and purchasing a new pasteurizer.

But Andrew Martin is excited about selling creamline milk, which will enable Linden Creek to survive during a time when it’s harder than ever for dairy farmers to make any money.

“For us, it’s huge. The milk price has been pretty bad the past four or five years and it was starting to finally come back up a little bit, and then COVID hit and dropped it to levels we haven’t seen since before I was born,” said Martin. “We decided we had to do something to basically keep the farm going, so we looked into bottling and getting something for our product instead of just about giving it away.”

Creamline milk is different from what is sold in the grocery store. The milk is pasteurized – heated to eliminate bacteria – but it’s not homogenized, which means the fat content is not reduced and spread throughout the milk.

The result is a layer of cream atop the milk, so you have to shake it before you drink it.

Martin said the creamline version of milk is sweeter and thicker than homogenized milk.

“You definitely will notice a difference in taste. It’s a little sweeter, and it’s easier for your body to digest. It’s the most natural milk that you can get other than raw milk,” said Martin.

He also pointed out that people can make butter from the cream.

The family started bottling pints, half-gallons and gallons of non-homogenized white milk in plastic jugs, and is finalizing the recipe for chocolate milk. The milk is available for purchase at the farm.

The Martins plan to produce seasonal and specialty flavors, too, including strawberry and chocolate peanut butter.

The Martins pasteurize at a low temperature of 145 degrees for about a half-hour, and then cool and bottle the milk. Its sell-by date is 14 days after the milk is bottled.

Ultra-pasteurized milk, in contrast, can last as long as six months, Martin said.

And while whole milk gets a bad rap, Holly Martin, Andrew’s mother, points out, the nutrients in milk, like protein, calcium and vitamin D, are all healthy and important in a diet.

The farm also gives the Martin family the opportunity to farm together.

The Martins tend to 125 cows on the farm, and they milk about 80 a day. The cows produce about 470 gallons daily.

Andrew and his father, Ed, handle daily operations, while Andrew’s siblings, Michael, a city of Pittsburgh police officer, and Jacob, who is in law school, also work on the farm. Michael’s wife, Rose, is the advertising and marketing coordinator, and Andrew’s wife, handles the calves and heads up the pasteurization and bottling operation.

At Linden Creek Farm, the cows are the stars of the show. Each month, one is selected as “Employee of the Month,” and their homes are clean and comfortable, with plenty of room for fresh air, growth, and social interaction.

Holly Martin said it’s important for consumers to know where their milk is coming from, and the family enjoys giving tours of the farm.

“We’re going on our fifth generation of farming. Our animals are healthy and well-cared for. You can see whose milk you’re drinking, you can see exactly what they ate,” she said. “We happily give our own family this milk.”

The family is planning a Christmas on the Farm on Dec. 5, a socially distanced event that will include Santa Claus, a small petting zoo, farm tours, and a selfie family photo area. Non-homogenized milk samples and cookies will be provided.

The milk produced by Mary Beth Brown’s herd of 60 Holstein and Jersey cows is bottled and sold on the farm, and at local vendors’ shops, including The Country Pie Shoppe in Mount Pleasant and Werry’s Provision in Scottdale.

“It’s definitely richer, thicker, and creamier. When you look at how (the fat) separates, it looks like it did in the ‘50s and ‘60s,” said Brown. “There’s a bit of nostalgia to it.”

The farm just purchased a 100-gallon vat pasteurizer to replace its 45-gallon vat in order to increase production.

Additionally, Brown recently applied for a license to sell raw milk – milk that has not been pasteurized – and is awaiting approval to begin bottling and selling.

The farmers note, too, that almond, oat, soy, and other plant-based alternatives that compete for customers aren’t really milk, even though they are labeled as such.

“It’s not milk. For something to be milk, it has to come from a mammal. The dairy industry has been fighting that. It’s frustrating,” said Holly Martin.

Despite the struggles the dairy industry is facing, and the long days – “There are no days off when you own a dairy farm,” Holly Martin said – she is proud of the farm’s growth and her family’s commitment the farm.

Said Holly, “The kids, led by Andrew and Kelly, have really taken this farm to places Ed and I wouldn’t have or couldn’t have.”