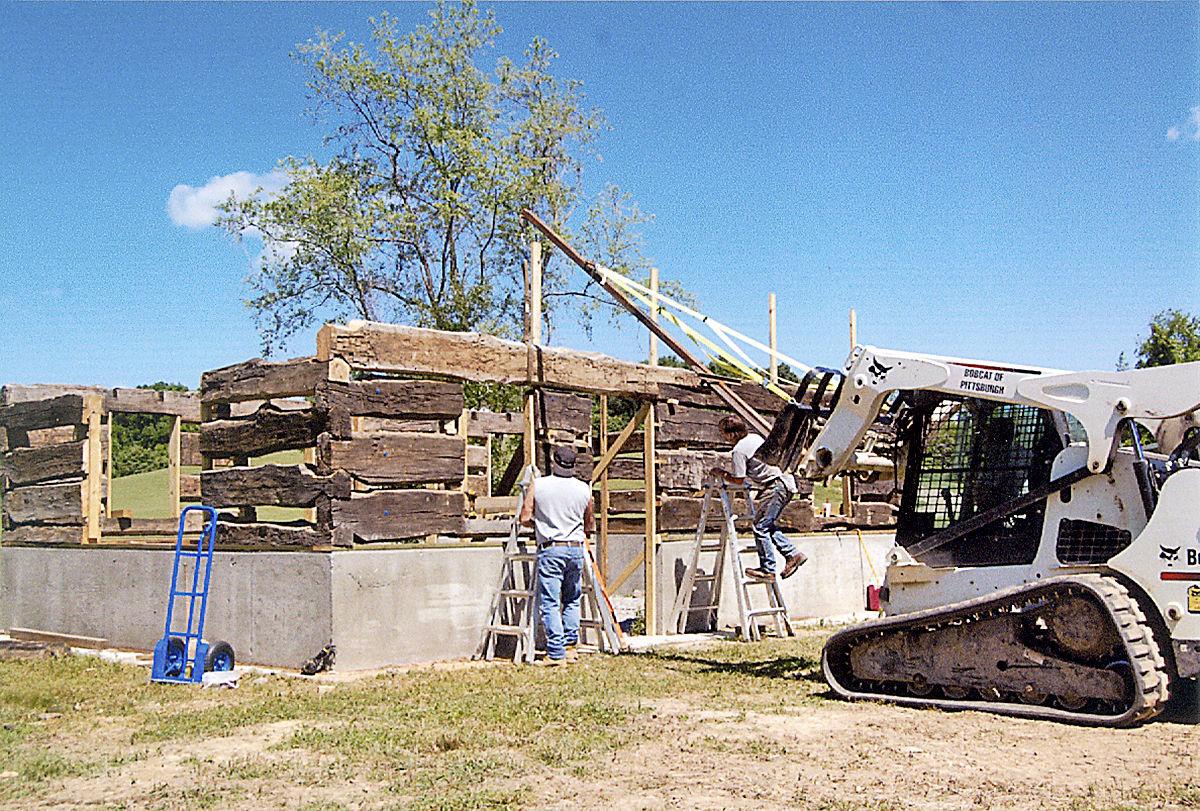 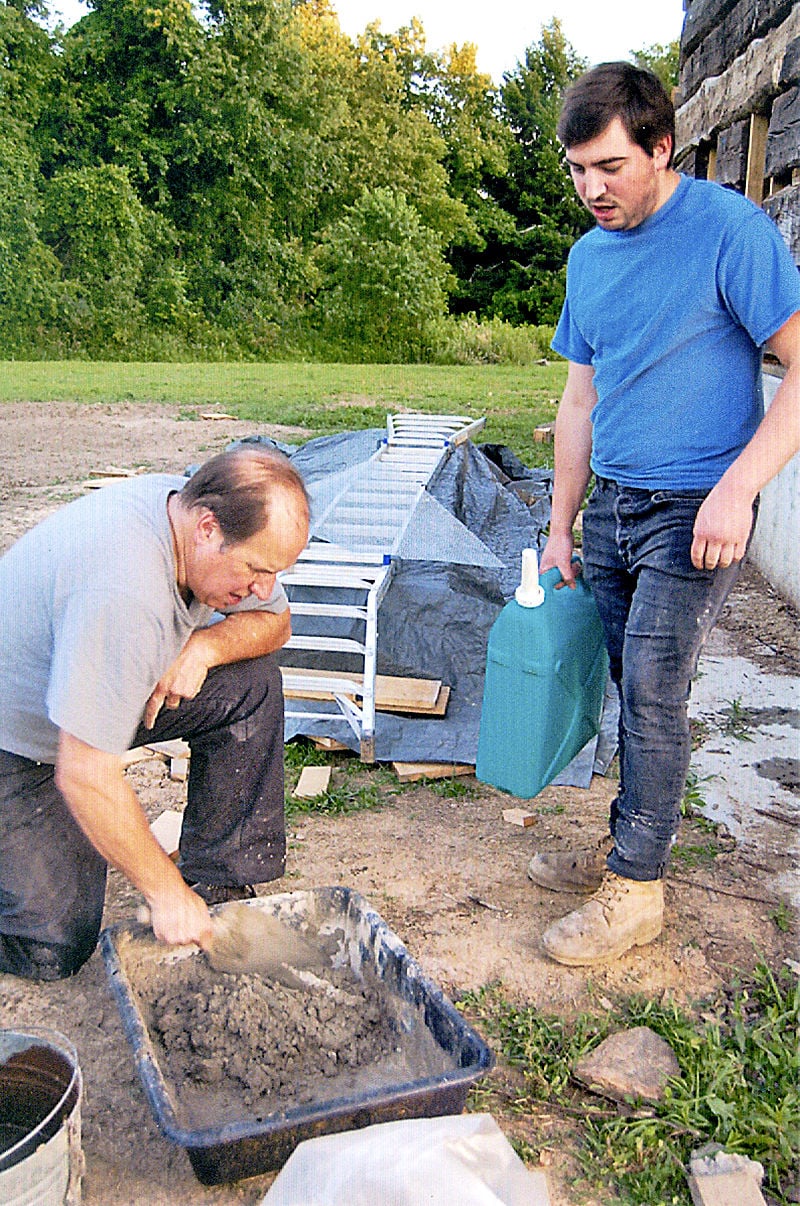 Isaac Pleta holds a water jug while his father, Jeff, mixes grout that goes between the logs of the Sumney log home that is being rebuilt at Mingo Creek County Park. 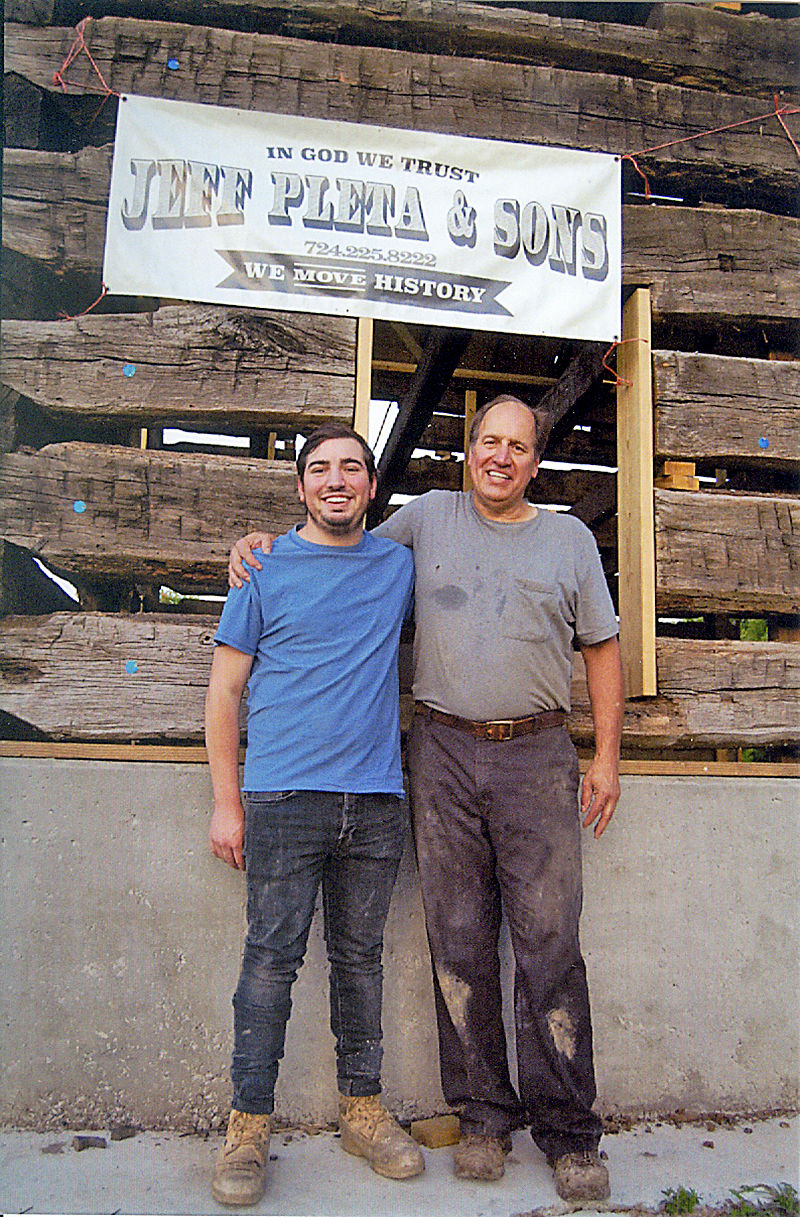 Jeff Pleta and his son, Isaac, are rebuilding the Sumney log home at Mingo Creek County Park. The house was relocated from Nottingham Township. 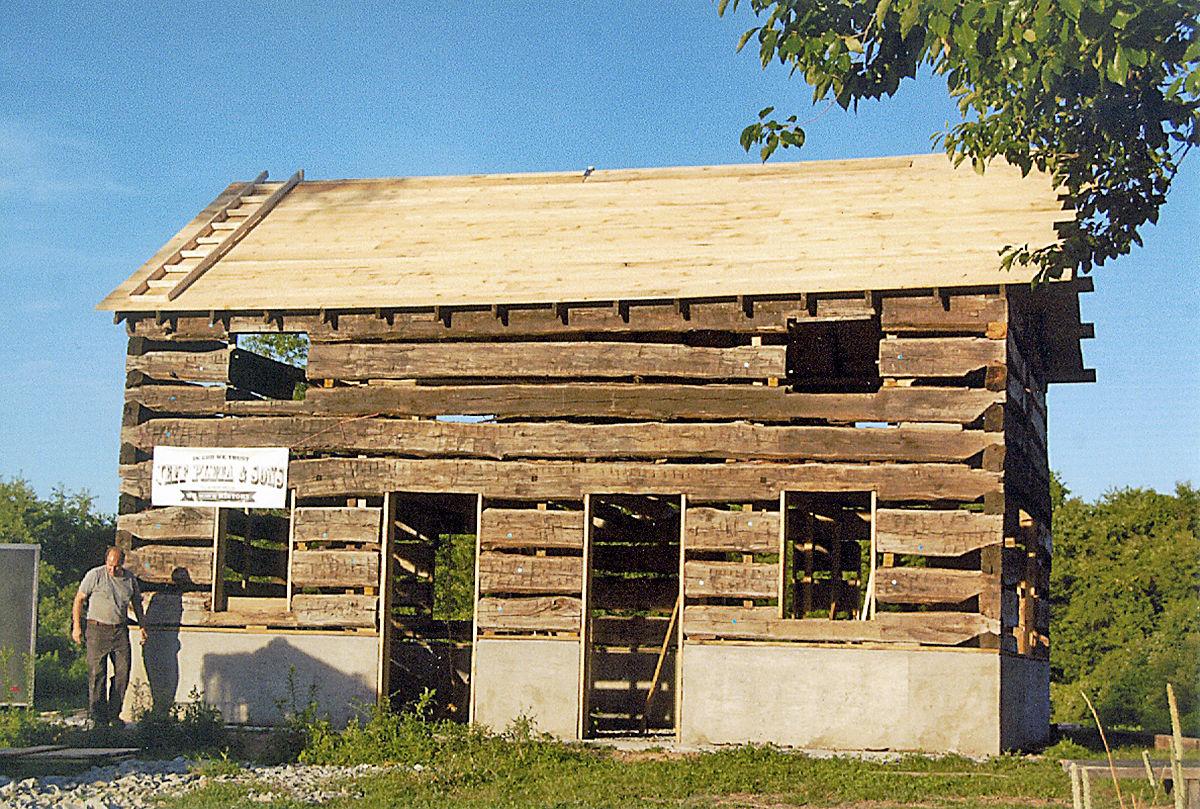 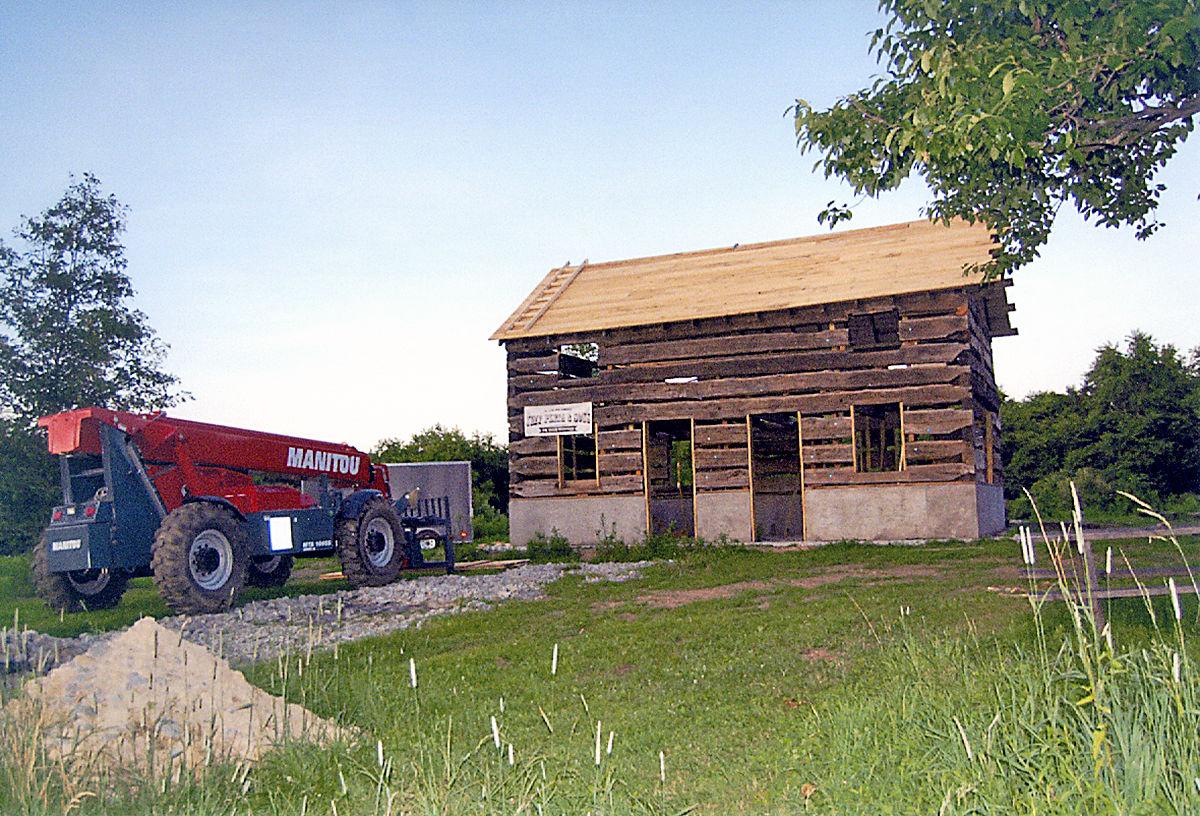 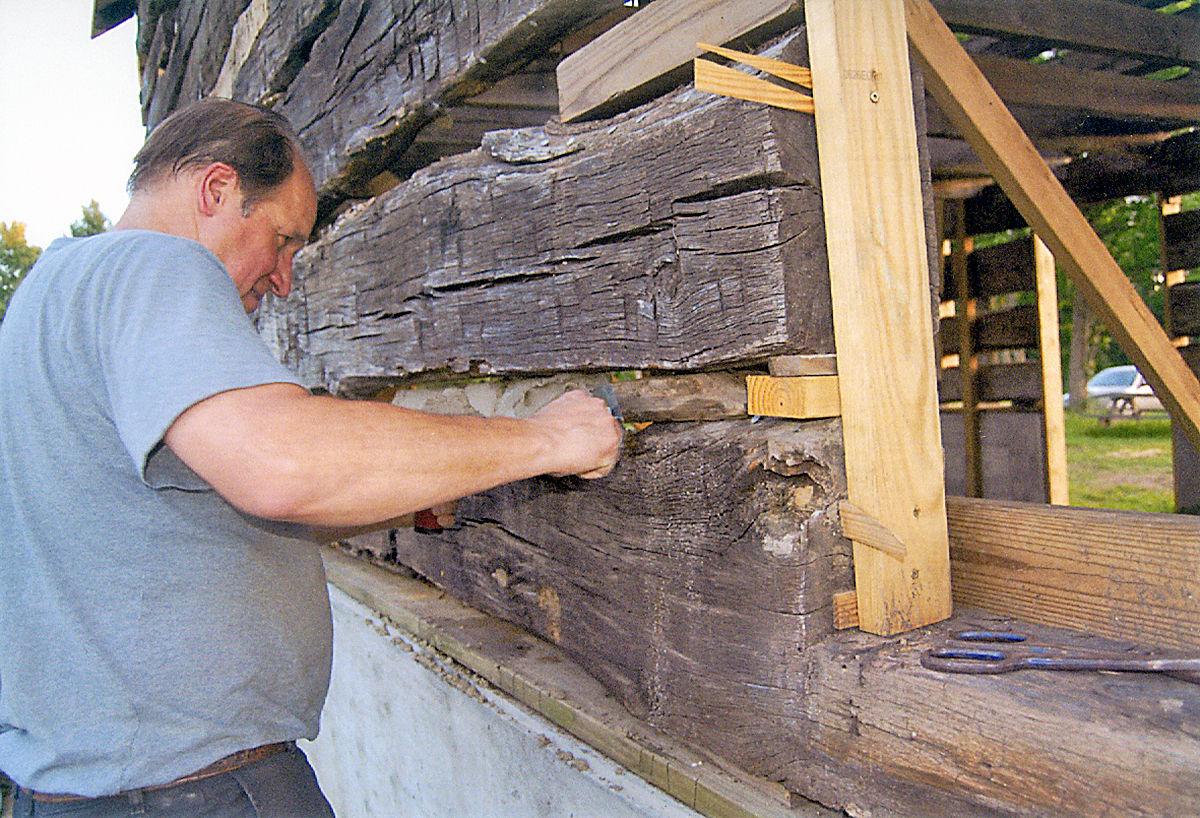 Isaac Pleta holds a water jug while his father, Jeff, mixes grout that goes between the logs of the Sumney log home that is being rebuilt at Mingo Creek County Park.

Jeff Pleta and his son, Isaac, are rebuilding the Sumney log home at Mingo Creek County Park. The house was relocated from Nottingham Township.

Isaac Sumney built a log home early in the 19th century in Nottingham Township near property that would, 150 years or so later, become Mingo Creek County Park.

The last private owners of the Sumney log home, Philip and Kathy Long, donated the building to Washington County after attempts to give it to the township or sell it to a new owner failed to materialize.

After being disassembled log by log with positions noted on tags in 2017 at its Sugar Run Road location, the components went into storage.

This year, the Sumney home has been reconstructed within Mingo Park under an $88,400 contract with the county.

“I’ve moved more historic properties in Washington and Allegheny County than anybody else,” claimed Jeff Pleta, who has been part of the various aspects of the Sumney home project since its inception.

“I just do it as a weekend warrior,” he said recently in a phone interview after a day on the job as a real estate property manager. He also was a construction manager for The Meadows and Wheeling Island casinos.

Even for someone with Pleta’s extensive background, rebuilding a house is no easy task.

He found much of the original wood to be rotten and unusable. He couldn’t just head for the local builders’ supply store and pick up a truckload of house-sized logs. Neither was felling trees and hewing them, as the Sumneys of old had likely done, an option.

So he found a source of spare material in the rafters of a garage in Hickory that was being torn down next to the home of his co-worker John Mahla.

That the timbers were the same size as the ones that needed to be replaced in the Sumney house, Pleta attributed to “divine providence.”

Maybe it was no accident. The motto of Jeff Pleta and Sons is “We move history and in God we trust.”

Pleta called Mahla “a young guy who has the skills of a pioneer. He honed inventory logs to fit.”

Another person who was an integral part of the project was Alex Cowden, a subcontractor who employed carpentry and other skills to aid in the assembly.

Pleta power-washed the logs. He also procured rough-cut hemlock wood from the Amish country that, he said, “looked old.”

“I was able to save all the woodwork for the mantel,” he continued. “(The county) didn’t want to have any fires in there, but we recreate how the fireplace looked using face stone.”

Pleta also said the house before its move had “a beautiful moss-covered roof with patina.” Its new covering will be metal.

Of replacement doors and windows, Pleta said, “Hopefully we can get them to look old.”

The Sumney house actually is a double, with side-by-side structures joined by what was known as a “dogtrot.” A modern term would be breezeway.

Its re-created form will be just the larger of the two parts, and Scout groups will be using the historic home for their activities.

Pleta’s contract with the county has a completion date for month’s end.

Pleta has an archive of news stories about his moving experiences with buildings, going back to 1994 when he and his wife, Marsha, purchased a then-140-year-old, 10-room house from Washington & Jefferson College for $1,500.

“I think I can move that,” Pleta recalled saying about the Mary Vester house on South Wade Avenue, so he called a house-moving company and they said, “No way.”

So it was up to Pleta to figure out how to convert the home into mobile pieces.

“Now you have modular homes,” he said. “This was in reverse. You sectionalize these buildings. I just love doing it.”

The Mary Vester house was hoisted by a crane and onto a truck’s flatbed and hauled to Lockhart Street by Pleta and relative Rick Insana.

In 2005, Pleta worked on a move of the Archer one-room schoolhouse in Prosperity, Morris Township.

And a decade later, Pleta divided the former Wexford trolley station into thirds so the 650-square-foot frame building could be trucked down Interstate 79 to the Pennsylvania Trolley Museum in Arden. A camera on a drone – a device that didn’t exist when the station was built – captured images of its journey from above.

“It seems like there are a lot of hidden treasures out there,” he said. “Instead of putting it in a dump truck, I put it on a flatbed.”