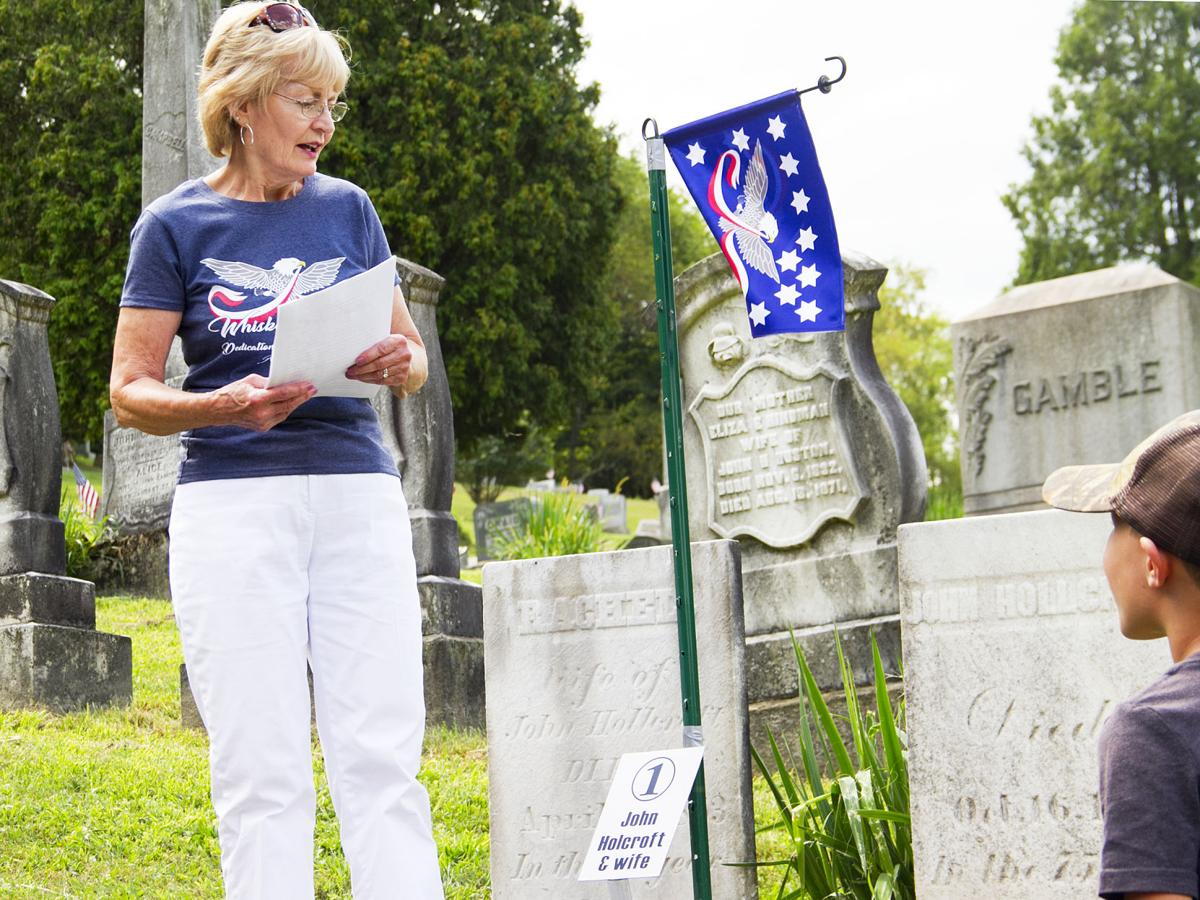 Dorothy Bewick shows the new headstone, marker and banner at the grave of John Hollcroft. 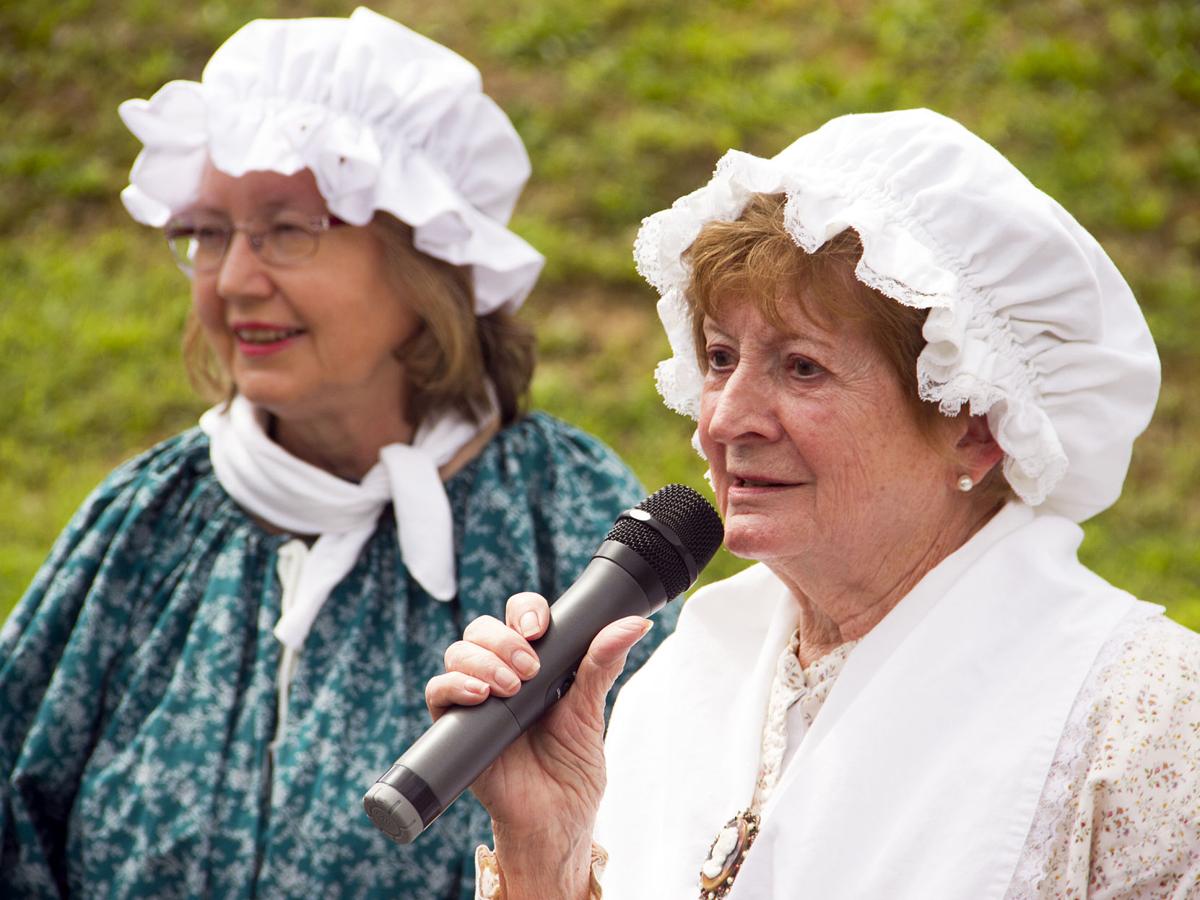 Donna Marraccini, left, and Betty Amato, members of the Peters Creek Historical Society, where among the guests who attended the dedication dressed in 18th-century apparel, explaining what Western Pennsylvanians tended to wear back then. 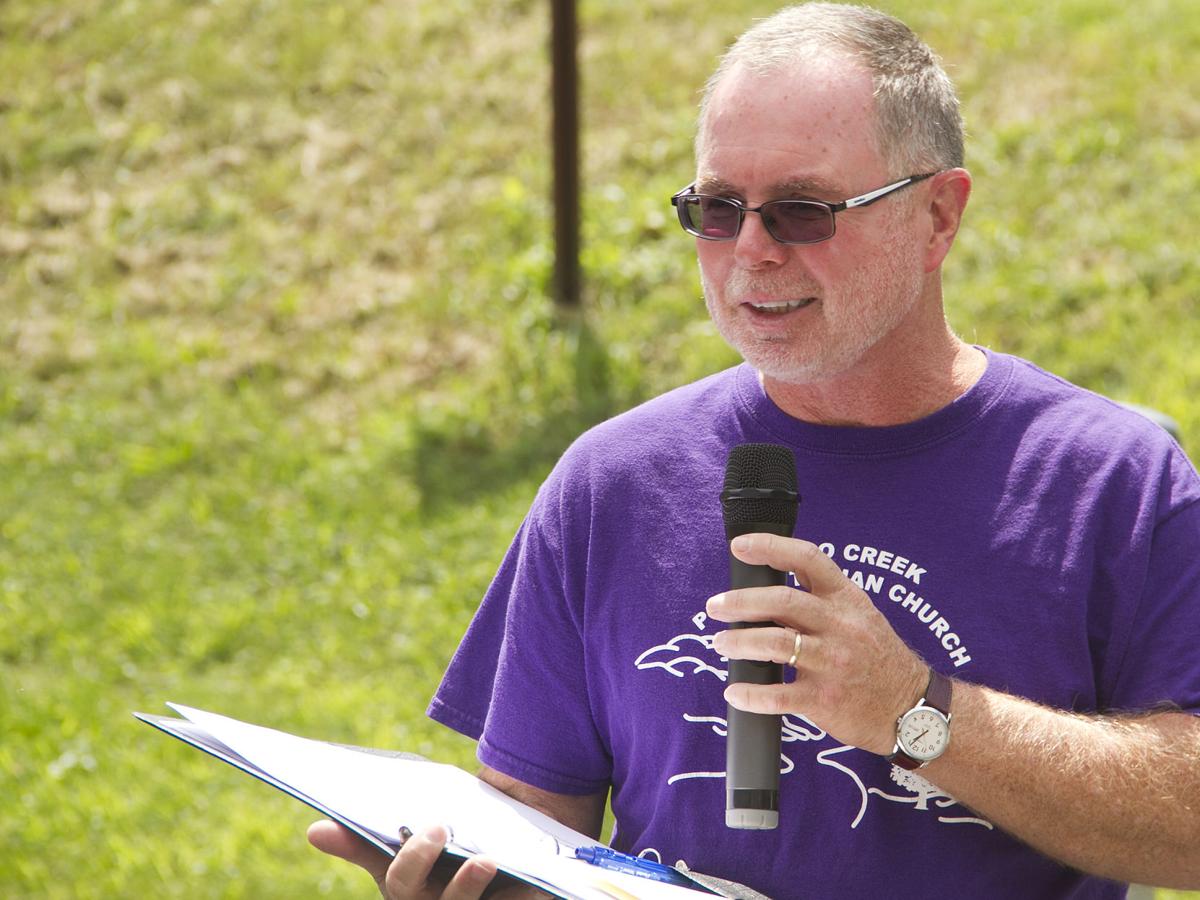 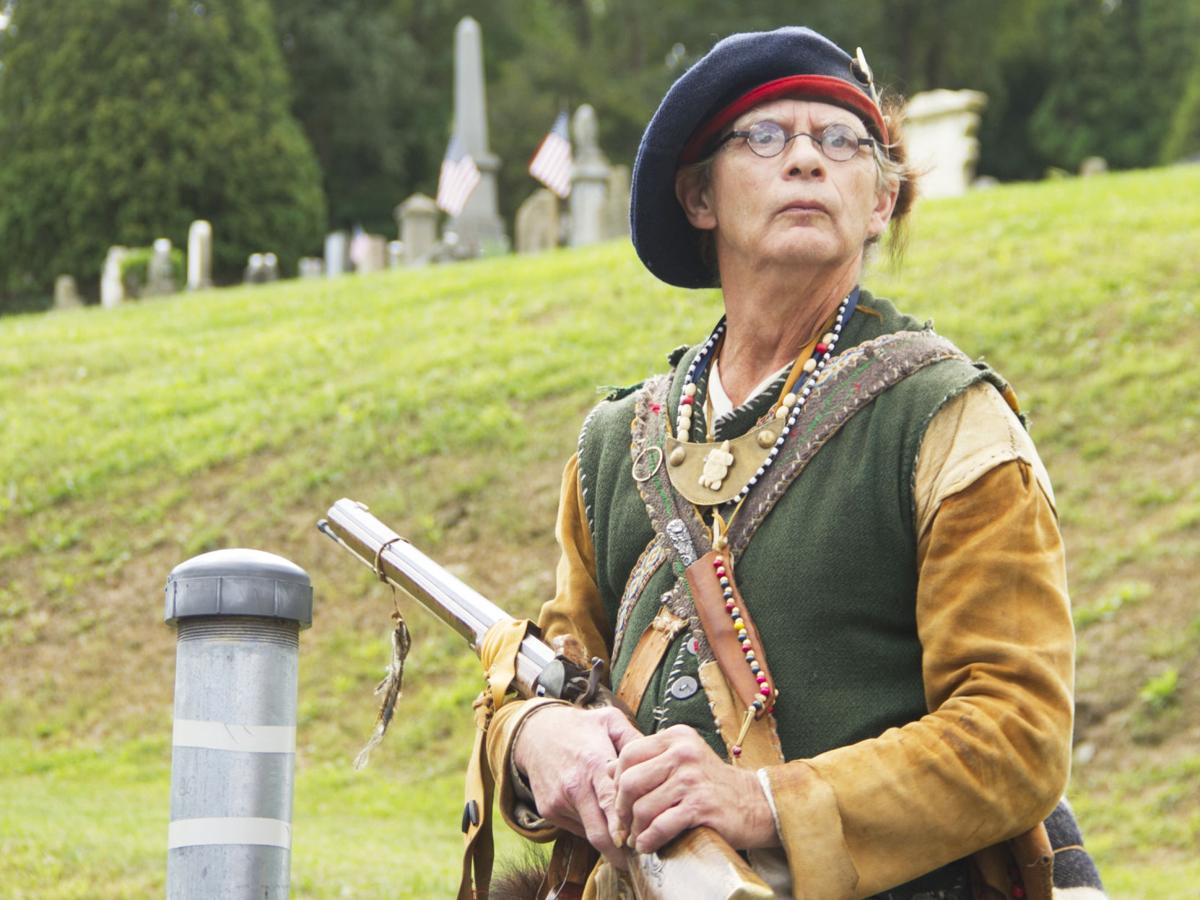 Charles McCormick made the 18th-century-style clothing he is wearing at the dedication. 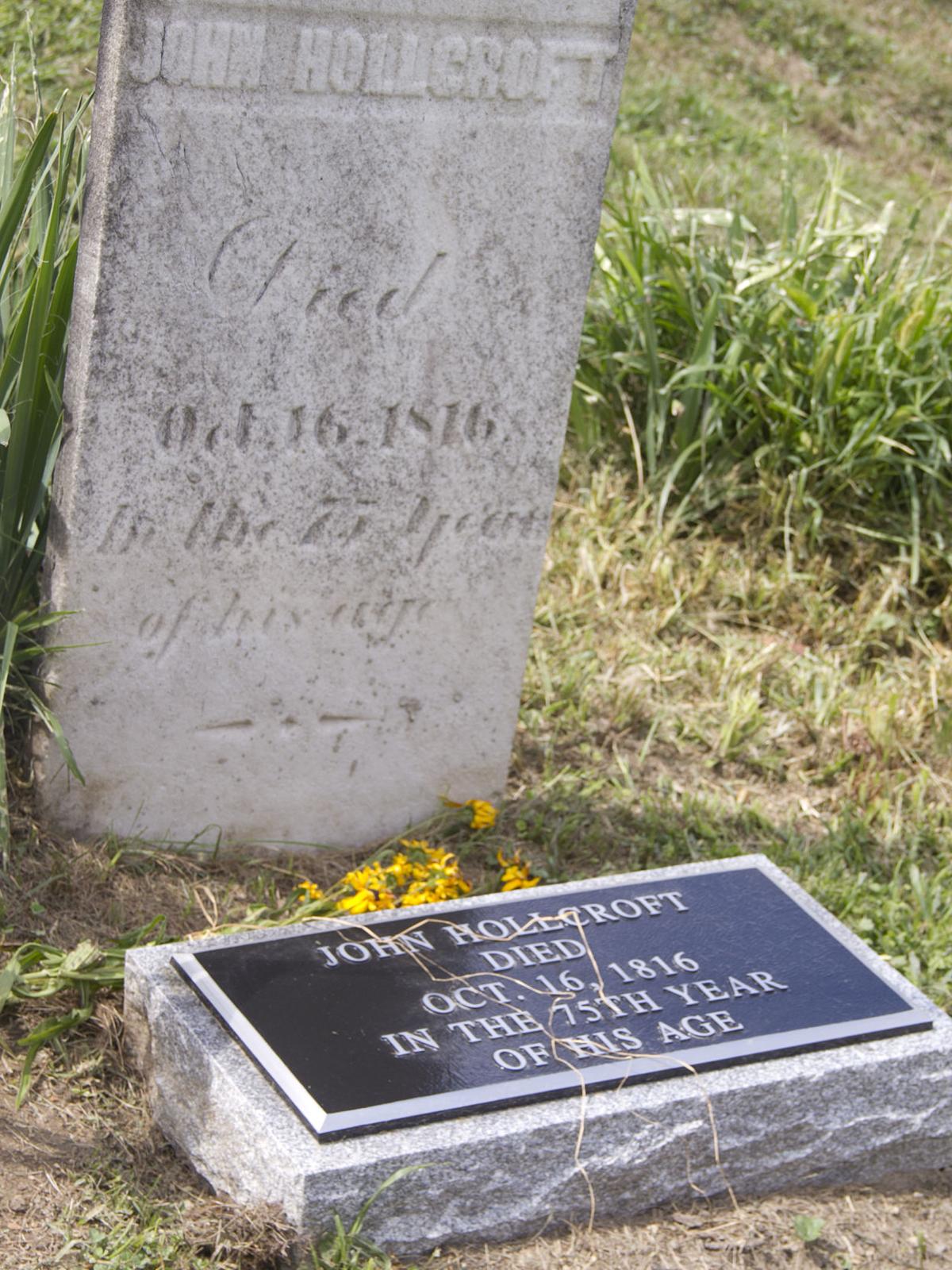 The grave of John Hollcroft 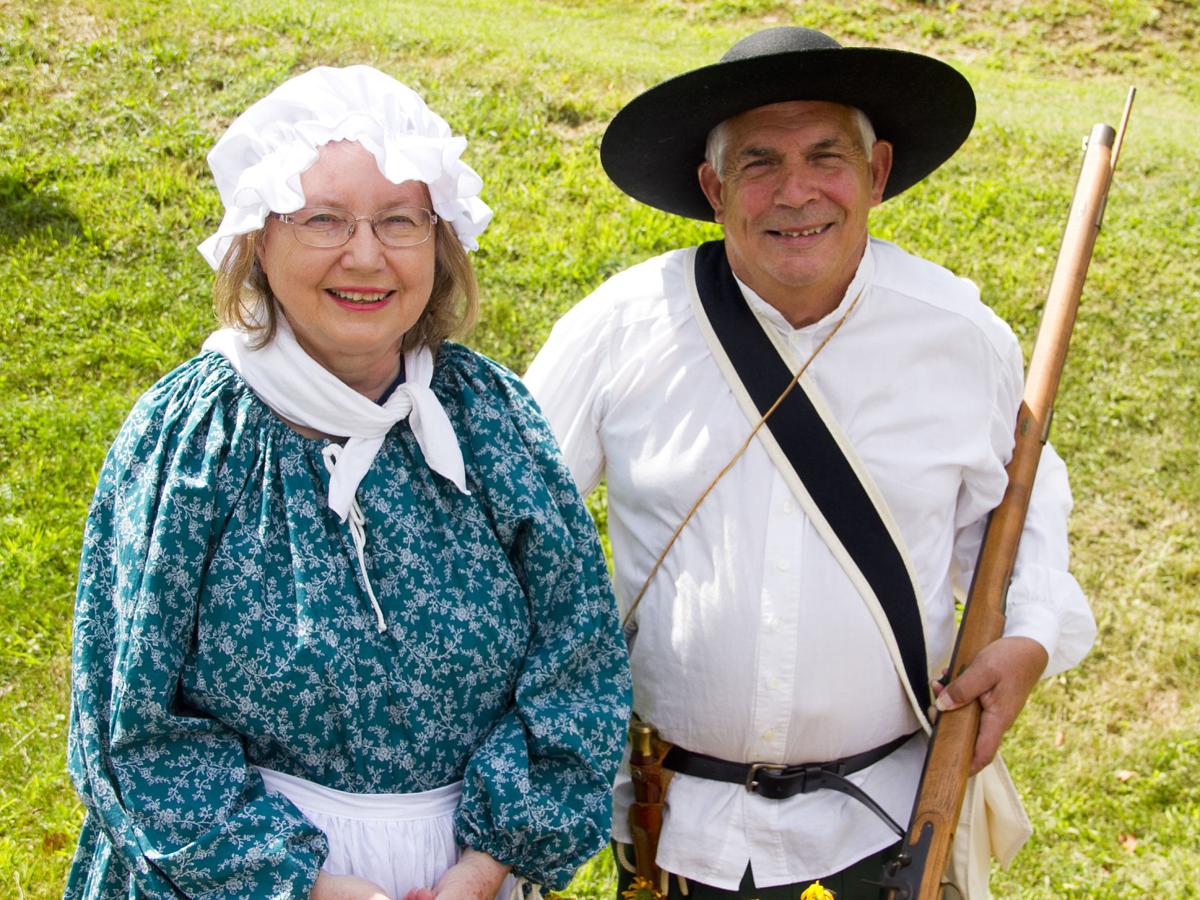 Donna and Len Marraccini, members of the Peters Creek Historical Society, are dressed in what Western Pennsylvanians would have worn in the late 18th century. 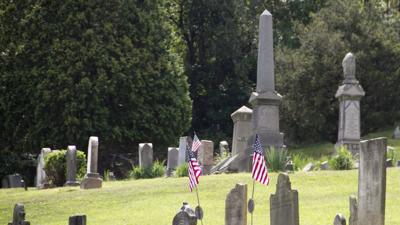 Dorothy Bewick shows the new headstone, marker and banner at the grave of John Hollcroft.

The grave of John Hollcroft

Donna and Len Marraccini, members of the Peters Creek Historical Society, are dressed in what Western Pennsylvanians would have worn in the late 18th century.

In the early years of Washington County, the beverage situation was much different than today.

“Whiskey was consumed by men, women and children. The farmer’s wife set it on the table as a beverage at mealtime,” Dorothy Bewick said, and of course, there was the medicinal aspect. Trade, too: “The farmers could barter with it and sell barrels of it in the East.”

So when the federal government imposed a tax on the spirits and the stills in which they were made, the result was what we know today as the Whiskey Rebellion.

At the epicenter of the protest was the Mingo Meeting House in Union Township, near the present-day Mingo Creek Presbyterian Church and Mingo Cemetery, in which several of the rebels are buried.

Saturday marked the dedication of “Headstones of American History: The Whiskey Rebellion,” a project Bewick spearheaded to place new headstones in front of the originals and metal markers identifying who is buried there, along with Whiskey Rebellion banners. Funding came from a Washington County Community Foundation grant.

Receiving upgrades were the graves of five participants of the rebellion, plus the Rev. Samuel Ralston, the first pastor of Mingo Creek Presbyterian. A new information board at the foot of the cemetery provides a locator map and a sentence or two about each of the men.

• John Hollcroft was an active insurgent who used the name “Tom the Tinker” to threaten farmers who complied with the whiskey tax.

• The Rev. Samuel Ralston was the first pastor of Mingo Creek Presbyterian Church. The Rebels met in Mingo Creek Meeting House to discuss the tax and plan their strategy.

• John Hamilton, colonel of the Mingo Creek Militia and sheriff of Washington County, was accused of helping rioters burn the Neville home at Bower Hill. He and other prisoners were marched by foot to Philadelphia for trial, where he was acquitted.

• Maj. James McFarlane led hundred of militiamen to Bower Hill to force the local tax collector to resign. McFarlane was killed in an exchange of gunfire.

• David Hamilton offered the excise officers his hospitality and drinks of whiskey with Jamaica ginger when they came to seize his still. After the officers fell into a sound sleep, Hamilton and his neighbors rushed the still and whiskey to a place of safety, known as Ginger Hill today.

• John Gaston, a Revolutionary War veteran, delivered “Tom the Tinker” letters to the Pittsburgh Gazette, to be published for all to read and be forewarned.

During the dedication, Bewick acknowledged the many supporters of the project, including two fellow Mingo Cemetery Corp. board members: Ronald Bewick, her husband, who manages the cemetery on a “very limited budget” and installed all the posts, grave markers and flags, and Jim Mocniak, responsible for stabilizing more than 90 old headstones and maintaining the front section of the cemetery.

The Rev. Glenn McClelland, Mingo Creek Presbyterian Church pastor, gave the invocation and added some details about the cemetery, which is across Mingo Creek Road from the church, just off Route 88.

“The early settlers of this area called that God’s Acre, when it was the original cemetery,” he said. “That was the place they had chosen to bury their deceased loved ones in the late 1700s, the beginning of what is now Mingo Cemetery.

Regarding the church’s history:

“As early as 1774, people were gathering here at Mingo to hold services of worship and praise to God. At first, those services took place outdoors in the shade of an old oak tree.”

Along with the Whiskey Rebellion, the now-14-acre cemetery contains the graves of veterans of most American wars, including nine from the American Revolution and 18 from the Civil War. Dorothy Bewick said that the intent is to honor them with further “Headstones of American History” projects, as funding permits.

“Don’t forget me,” she said to guests who could help in that manner. “I have more ideas.”