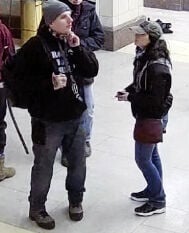 Philip “Flip” Vogel II and Debra J. Maimone are accused of entering the U.S. Capitol during the Jan. 6 insurrection. 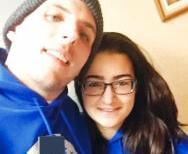 Philip “Flip” Vogel II and Debra J. Maimone are accused of entering the U.S. Capitol during the Jan. 6 insurrection.

A former Washington County man and his fiancée were arrested this week for allegedly participating in the Jan. 6 insurrection in Washington, D.C.

Philip C. Vogel II, 33, and Debra J. Maimone, 27, are accused of entering the U.S. Capitol where they were allegedly seen on surveillance video kicking in an office door and stealing gas masks typically reserved for lawmakers.

Vogel, who goes by the nickname of “Flip,” is originally from Houston, according to court records unrelated to the attack on Congress. The couple now lives in New Castle, according to federal investigators.

In a video posted on a Parler social media page registered to Maimone, the couple walked inside the Crypt area of the U.S. Capitol, gawking at the sight around them, investigators said.

“It’s amazing,” Maimone said as she pulled an American flag bandana down to reveal her face, according to court documents.

“Put your mask on. I don’t want them to see you,” said Vogel, who was allegedly recording the video, according to court documents.

Vogel is seen kicking in an office door while Maimone later put on a gas mask for protection, investigators said. They were also seen rummaging through a bag filled with police gear and taking “escape hood” gas masks that are for federal officials to use during an emergency, investigators said.

A person using Maimone’s Parler account allegedly had conversations with other people on the social media platform.

“I’m saying I was at the government building FULL OF TYRANTS and I WATCHED A TON of patriots that were fed up with being shot at flash banged and gassed for trying to peacefully protest!” the poster wrote. “AND THEY TOOK THE CAPITAL THAT IS THE HOME OF THE PEOPLE AND PAYED (sic) FOR BY THE PEOPLE!”

The two were charged March 12 with theft of property less than $1,000; knowingly entering or remaining in any restricted building or grounds; and violent entry and disorderly conduct on Capitol grounds.

The couple owns and operates Vera General Contracting & Cleaning Services, which was previously based in McKees Rocks, but has since moved to New Castle, where federal investigators said they were arrested this week.