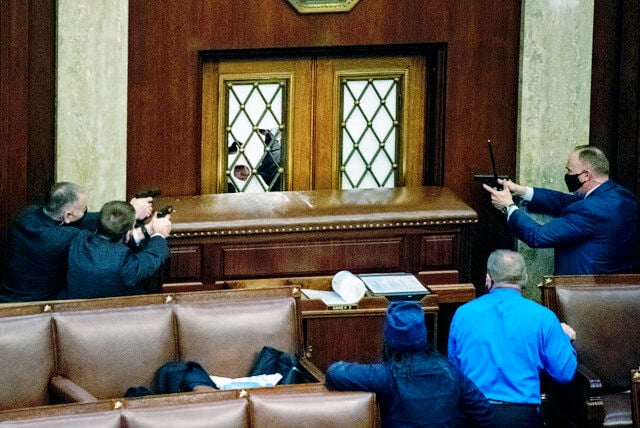 Plainclothes Capitol Police officers point their guns at rioters who had broken the glass of the main door of the House Chamber that was reinforced with a large piece of furniture at the U.S. Capitol in Washington, D.C., Jan. 6. 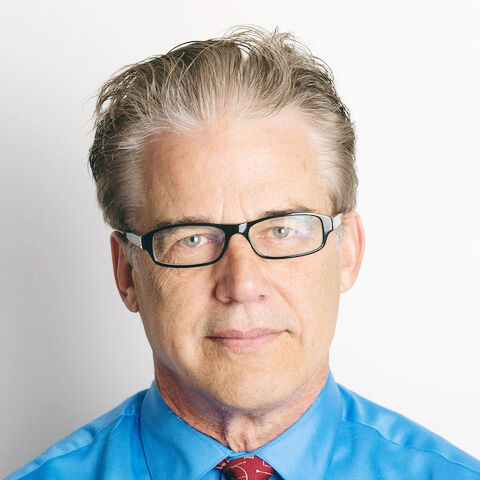 Plainclothes Capitol Police officers point their guns at rioters who had broken the glass of the main door of the House Chamber that was reinforced with a large piece of furniture at the U.S. Capitol in Washington, D.C., Jan. 6.

After snapping photos in the chamber of the U.S. House of Representatives last Wednesday, Pat Benic retired to the press room in the Capitol building, where he and his colleagues were engaged in routine tasks or pondering their lunch options.

The day took a decidedly different turn when Benic was handed a gas mask.

Benic used the word “surreal” a couple of times to describe the events that unfolded last week at the U.S. Capitol, when a mob of supporters of President Trump and his push to overturn the results of the 2020 election sacked the building and brought proceedings in the House and Senate to a halt. It was the latest instance when Benic, a 1970 graduate of Washington & Jefferson College and a photojournalist for United Press International (UPI) was an eyewitness to history.

“It was interesting to say the least,” Benic said.

The director of photography at UPI, Benic had been taking photos inside the House chamber as the process of certifying the electoral votes from last November’s election got underway. Republican members of that chamber raised objections to state votes earmarked for Biden, and the certification was stopped for two hours for a debate among the members.

Some of his fellow photographers “actually left to get something to eat,” Benic said.

It was during that time that the Capitol was breached and the melee began.

“I’m in the safest building in the world, in the House chamber, and they were banging on the door,” Benic recalled.

There were other UPI photographers stationed outside the building and they were able to get a much closer look at the tumult. Benic did take photos in the House Gallery during the evacuation. They show plainclothes officers with guns drawn, positioned behind furniture that was piled at one of the doors.

“It was like something out of an Old West cowboy movie,” he said.

Benic was sheltered back in the press offices for about an hour and 45 minutes as members of Congress were evacuated through tunnels under the Capitol. He was part of the last group to go, and was taken to the Longworth House Office Building, one of three office buildings used by members of Congress.

During his career as a photojournalist, Benic was in Tiananmen Square in Beijing when a nascent pro-democracy movement was crushed, at the Berlin Wall when it fell, and was in the Khyber Pass in neighboring Pakistan when Soviet tanks rolled into Afghanistan. Graduating with a degree in mathematics from W&J, Benic’s career as a photojournalist was “just one of those things.”

A native of Houston, his first big break as a photojournalist happened in 1972 when he was working for the now-defunct Daily Notes newspaper in Canonsburg. The trial of the killers of United Mineworkers reformer Joseph “Jock” Yablonski and his family was happening at the Washington County Courthouse, and the wire services requested some photos.

In the five decades since, Benic has been stationed in Asia and London, and has been in some of the world’s hottest spots, such as El Salvador and the Philippines.

At the Capitol last Wednesday, Benic said his colleagues did their jobs even as some in the throng were threatening them.

“Everybody did their job. You take what’s in front of you.”