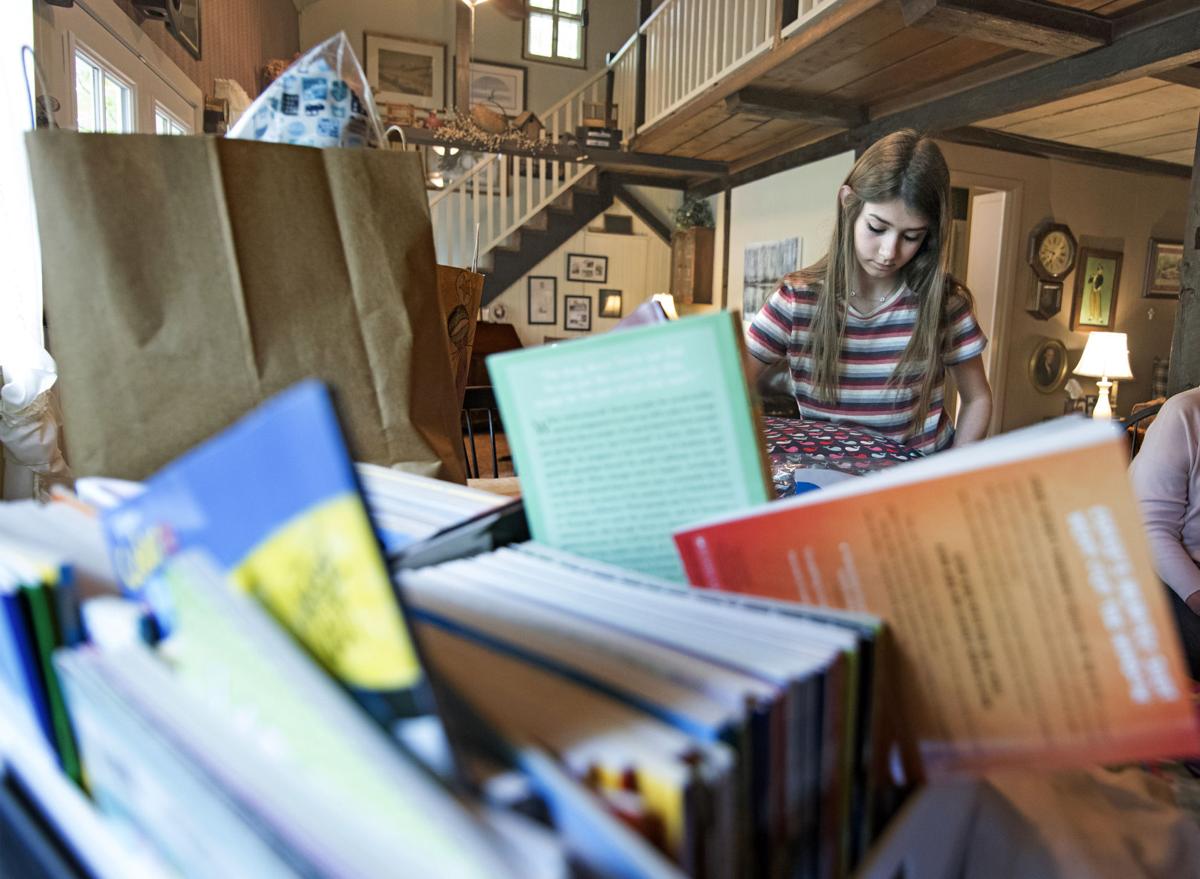 Nina Thompson assembles one of her Pillows for Peace at her home in Scenery Hill. 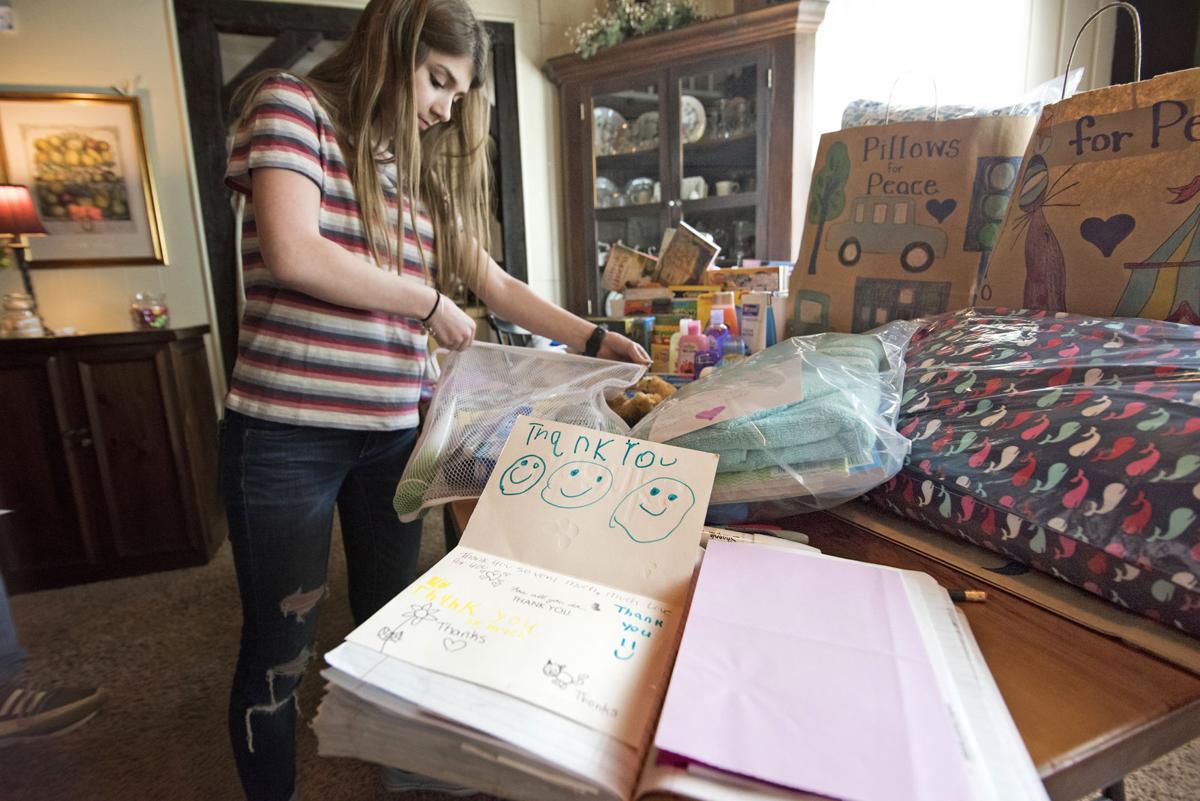 Nina Thompson has donated more than 410 Pillows for Peace to Domestic Violence Services since starting the project 2 ½ years ago. 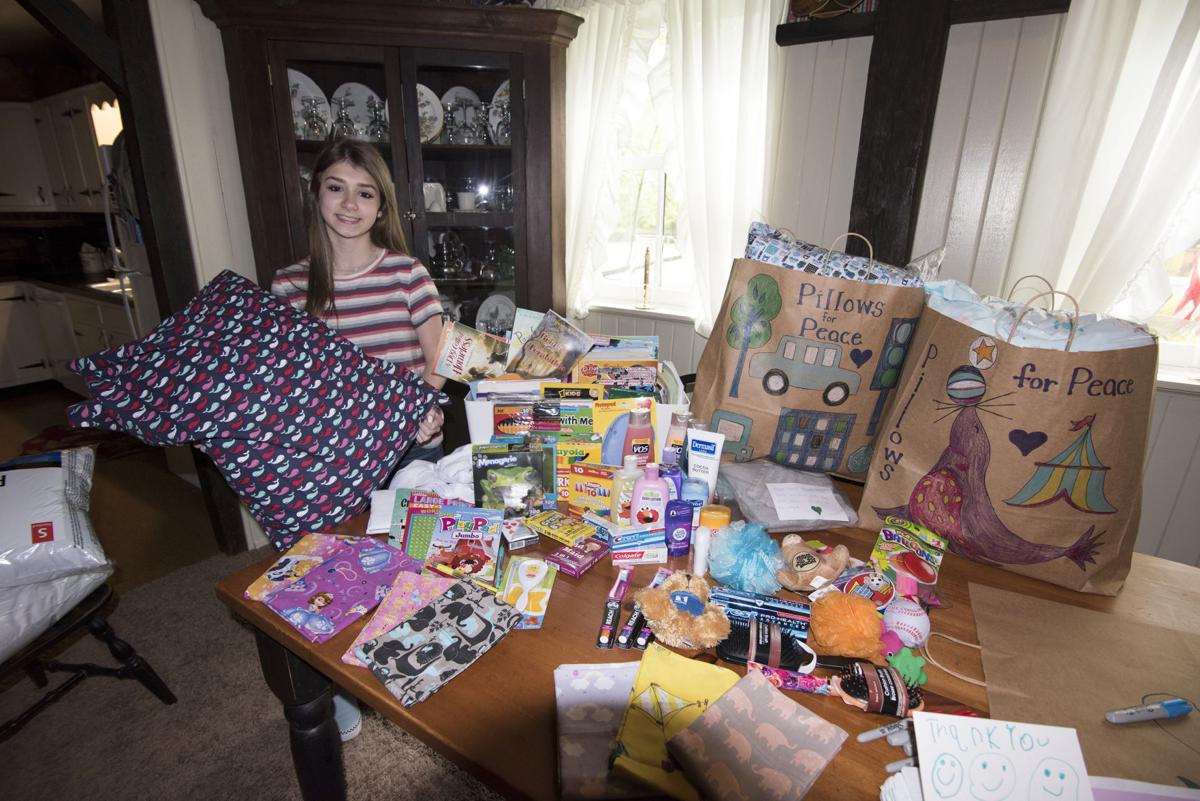 Nina Thompson, 14, with some of the items that she puts in her Pillows for Peace

Nina Thompson assembles one of her Pillows for Peace at her home in Scenery Hill.

Nina Thompson has donated more than 410 Pillows for Peace to Domestic Violence Services since starting the project 2 ½ years ago.

Nina Thompson, 14, with some of the items that she puts in her Pillows for Peace

In December 2016, Nina Thompson, 14, walked into the office of Domestic Violence Services of Southwestern Pennsylvania with her grandmother, Mary, carrying some pillows and care packages she had assembled for the children of women who were staying at the agency’s shelter.

The Bentworth High School ninth-grader didn’t realize at the time the powerful – and lasting – impact her contribution would have on the children at the shelter and in the community.

More than 2 1/2 years later, Thompson’s idea has turned into Pillows for Peace, a charity that has donated more than 410 bags to Domestic Violence Services.

And her generous spirit has inspired individuals, businesses and organizations to help her make the pillowcases and to donate items to fill the large brown paper bags that accompany each pillow.

For her philanthropic project, Thompson has been honored with the Extraordinary People Award for May, which recognizes people who make a positive difference in their communities. The award is sponsored by the Washington Observer-Reporter and Range Resources.

“She is a remarkable young lady. We are thrilled that she’s decided to partner with us,” said Kelly Young, donations and resources coordinator for DVS. “Our women and children in our safe house just love the pillows. It makes the kids feel so special. Often, they’re scared, coming into a new environment, and getting the pillows and the bags helps make them comfortable.”

Thompson, soft-spoken and poised, prefers to give credit to others, though.

“I never thought this many people would be willing to help me do something nice, but they have,” said Thompson, a high-honor student and soccer player.

At first, Thompson and her grandmother purchased all of the pillows, pillowcase covers and the items – toiletries, bath towels, washcloths, books and toys –that they placed in the large brown paper bags with hand-drawn pictures on the front.

But when congregants at Thompson’s church, Davidson United Methodist Church, found out about Nina’s charity, they mobilized. Church members began bringing supplies to church services or dropping them off at Mary Thompson’s Scenery Hill home.

Four women, Jean Belski, Karen Ghrist, Maryanne McCracken and Paula Shaw, have volunteered not only to sew the pillowcases, but also to buy fun material – with animal, sports, floral and cartoon prints, for example – that children like. The women have made more than 300 of the pillowcases for Pillows for Peace.

About twice a month, Nina and her grandmother drive to Domestic Violence Services to drop off the bags.

“A lot of times, kids come in to the shelter with nothing but what they have with them,” explained Thompson. “Most of them come with nothing. So, we put together bags with the pillow and pillowcase, toiletries, activities, books and towels and give it to them so they feel comforted. It’s theirs to keep.”

Washington Women’s Shelter is available 24 hours a day to women and their children who are victims of domestic violence.

“She’s really been invaluable to us,” said Young. “She’s helped bring awareness and helped get our message out there, and she’s helped the agency tremendously. She’s an extraordinary young lady.”

Thompson keeps records of all purchases and donations, and writes thank-you notes for every single monetary donation and for all supplies given to her.

She has a notebook in which she keeps cards and letters from mothers and children whose lives she tried to make more joyful.

Mary is proud of her granddaughter’s selflessness and dedication the project.

Thompson plans to continue Pillows for Peace until she graduates from high school.

“It’s been quite a journey doing this,” said Thompson. “I never thought it would grow to be something this big throughout the community. But it has.”

Winners of the Extraordinary People award are able to make a $500 donation to the charity of their choice, underwritten by Range Resources and the Observer-Reporter. Thompson has chosen to make her donation to Domestic Violence Services of Southwestern Pennsylvania.