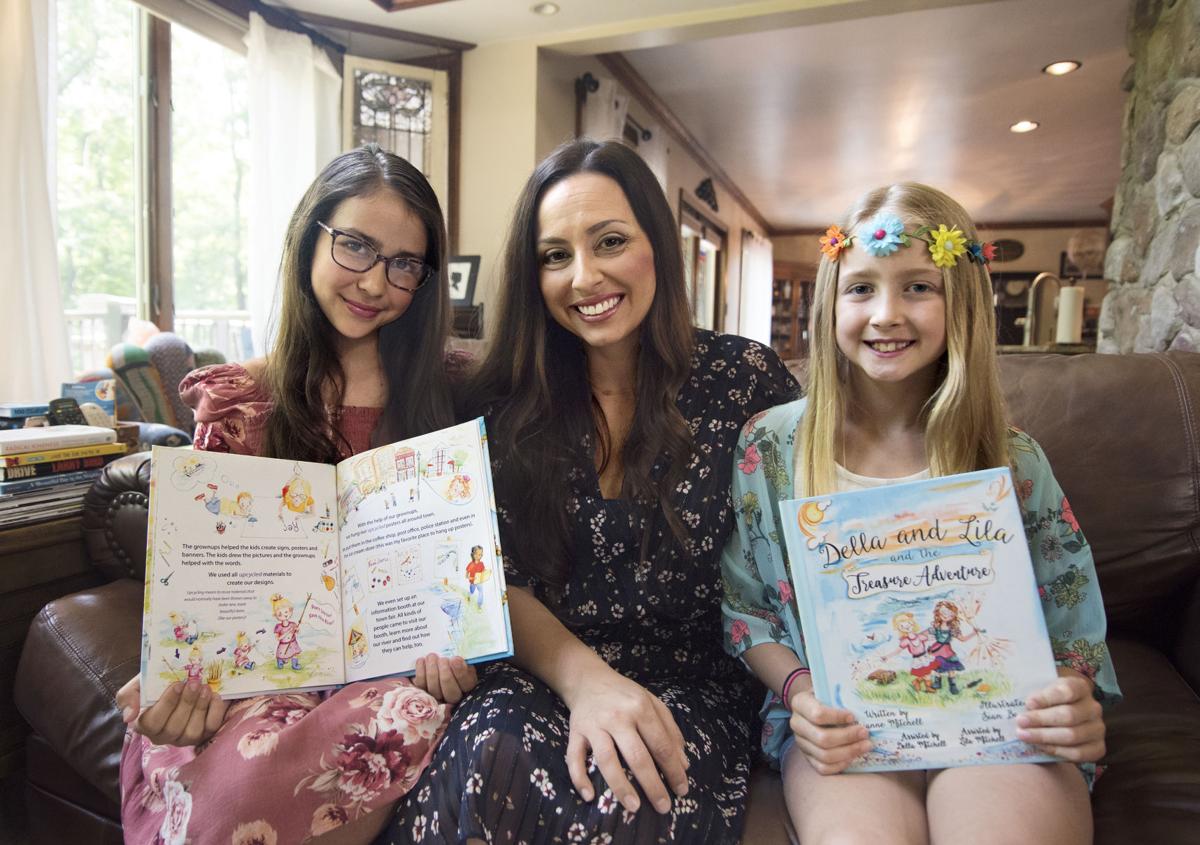 Brianne Mitchell, with her daughters Della and Lila, have written children’s books together, the proceeds of which are donated to local charities. 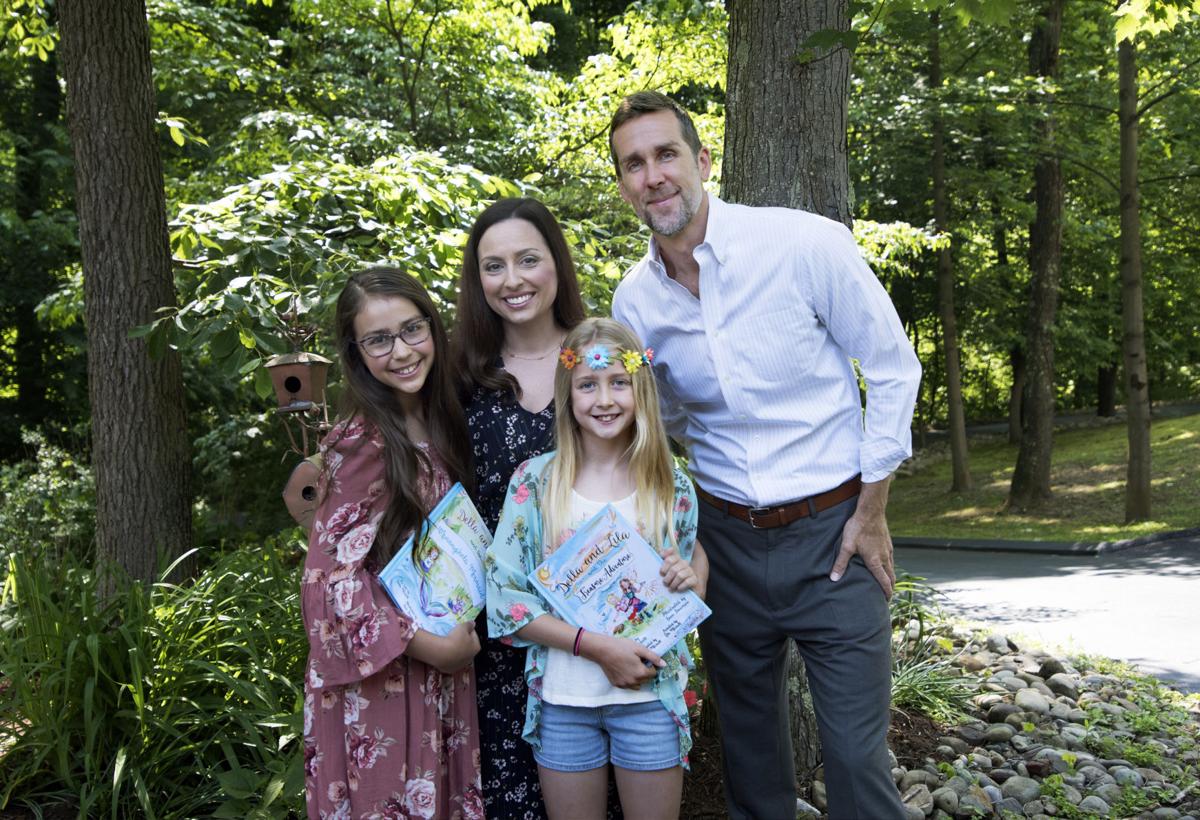 Brianne and Mitch Mitchell with daughters Della, left, and Lila at their home

Brianne Mitchell, with her daughters Della and Lila, have written children’s books together, the proceeds of which are donated to local charities.

Brianne and Mitch Mitchell with daughters Della, left, and Lila at their home

Former college professor and philanthropist Brianne Mitchell has collaborated with her favorite storytellers – daughters Della and Lila – on a charming book series about Southwestern Pennsylvania that has allowed the trio to do something they love: help people.

Mitchell, of West Brownsville, inspired by a story that Della, now 10, told her while they were sitting at the table working on homework five years ago, turned the tale into a book, “Della and Lila meet the Monongahela Mermaid.”

The story centers on Della and Lila’s efforts to help Marina, a mermaid who swims the waters of the Monongahela River, save her home from pollution and ecological damage, and to raise awareness – with the help of friends and family – about pollution in the river.

What Mitchell initially envisioned as a story she would type up and place in Della’s scrap book or give to family at Christmas, though, has garnered several awards and has been featured by Sesame Street and Disney Animation Studios.

Mitchell and her daughters decided to start the River Fund, which donates proceeds from the books each quarter to charities that help children and families in Southwestern Pennsylvania and worldwide, including Zephaniah Women’s Education and Empowerment Foundation in Pakistan, which provides schooling and skills training to children and women; the Washington City Mission; III & Long Foundation, which helps children with sickle cell disease; SD Project, which helps youth sports; and local libraries and school districts.

For her efforts to help her community and nonprofit organizations through the book series and to promote community service, Mitchell has been recognized with the ExtraORdinary People award in June.

Mitchell, an executive business consultant and media analyst, said she always viewed herself as a writer, but not an author.

“Seeing this book project through for the girls, as their mom, is what really gave me permission to step outside of my comfort zone and say we’ll publish this book and distribute this book. We’ll put this out there for the whole world to see, which is really intimidating,” said Mitchell. “But we thought we had a story to tell, at least in our community. And then it grew a little bit, and it grew a little bit more.”

Mitchell said writing the books with her daughters has also empowered the girls and encouraged them to be good citizens through community service.

In addition, the book series has provided an opportunity for other children to know their voices matter. If children can dream it, Mitchell said, they can achieve it.

“It’s been a nice way to teach children by showing them what other children are doing,” said Mitchell. “Children often want to do something good, but they don’t get the opportunity. It’s important for them to know they are heard.”

The Della and Lila book series has enabled the Mitchell family, including Brianne’s husband, Mitch, to meet new people and visit different parts of the world through book signings and book readings.

They have appeared at, among other places, Barnes & Noble stores, the Key West Sunset Celebration, Passages and Prose, a Pittsburgh literary event, WQED, Carnegie Science Center, and Nemacolin Woodlands. The girls were featured on Sesame Street’s nonprofit Yellow Feather Fund.

Mitchell, 38, has struck up a partnership with Welsh illustrator Sian Bowman, whose whimsical, pastel illustrations bring Della’s words to life.

So, the Mitchells traveled to England and Wales for a book tour that took them through London, Bath and Lacock, where Downton Abbey was filmed, and several Welsh villages, including Bowman’s hometown.

Both of the books in the series (the followup to the Monongahela Mermaid is “Della and Lila and the Treasure Adventure”) are set along the Monongahela River, where Mitchell spent much of her time as a child, and where she, Mitch and their daughters often boat, fish and swim.

The book, which includes a history of the Monongahela River, also contains Easter eggs – more than a dozen wildlife creatures native to Southwestern Pennsylvania hidden throughout the pages.

“We worked really hard with Sian to incorporate the flora and fauna and wildlife indigenous to Southwestern Pennsylvania, and we didn’t change the name of the Monongahela River because the Monongahela was Della’s world, it is her town, and we wanted to stay true to that,” said Mitchell.

A third book is nearly completed, and Mitchell said more are in the works.

For the girls, cowriting the books and volunteering with their mother has been rewarding in multiple ways.

The girls and Mitchell organize and participate in several fundraisers and drives (including coat and food drives), and hold an annual Christmas drive, where they collect toys and other items for about 1,000 area children, and then wrap them in a large hall at Washington County Fairgrounds.

Mitchell and her daughters have been recognized for their books and their community service.

Mitchell, who serves on the Washington County Children and Youth Services advisory board and is a 4H leader, has been chosen as one of Pittsburgh Magazine’s 40 Under 40, was selected by Inspiring Lives magazine for the Inspiring Women in Philanthropy Award, and was named a Socially Conscious Fashionista from Real Beauty Real Women Foundation.

Della and Lila, 8, received the Girls of Merit Award from the Girls’ World Expo.

The Della and Lila Book Series was named Best of the ‘Burgh by Pittsburgh Magazine in 2017 and 2018.

Said Mitchell, “It’s important to give back. Right now, we are fortunate. We wrote this book about helping the community, and we thought, ‘Let’s really do it. Let’s make a difference.”

As part of the ExtraORdinary People feature, Brianne Mitchell will receive $500, underwritten by Range Resources and the Observer-Reporter, to donate to the charity of her choice. She has selected Children and Youth Services’ Helping Hands.