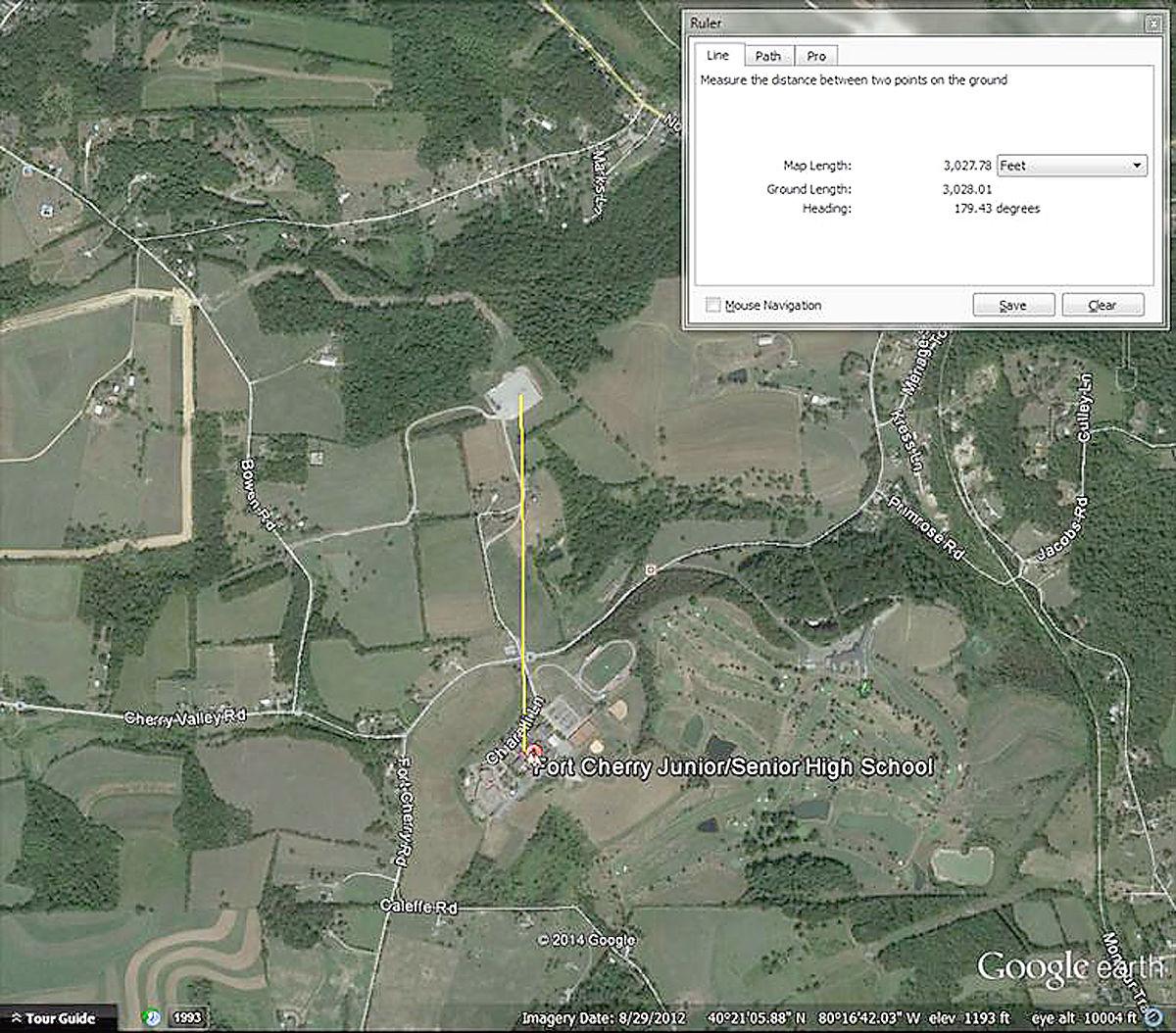 A Google maps image shows the distance - about 30,000 feet - from Fort Cherry schools to the Chiarelli well site. 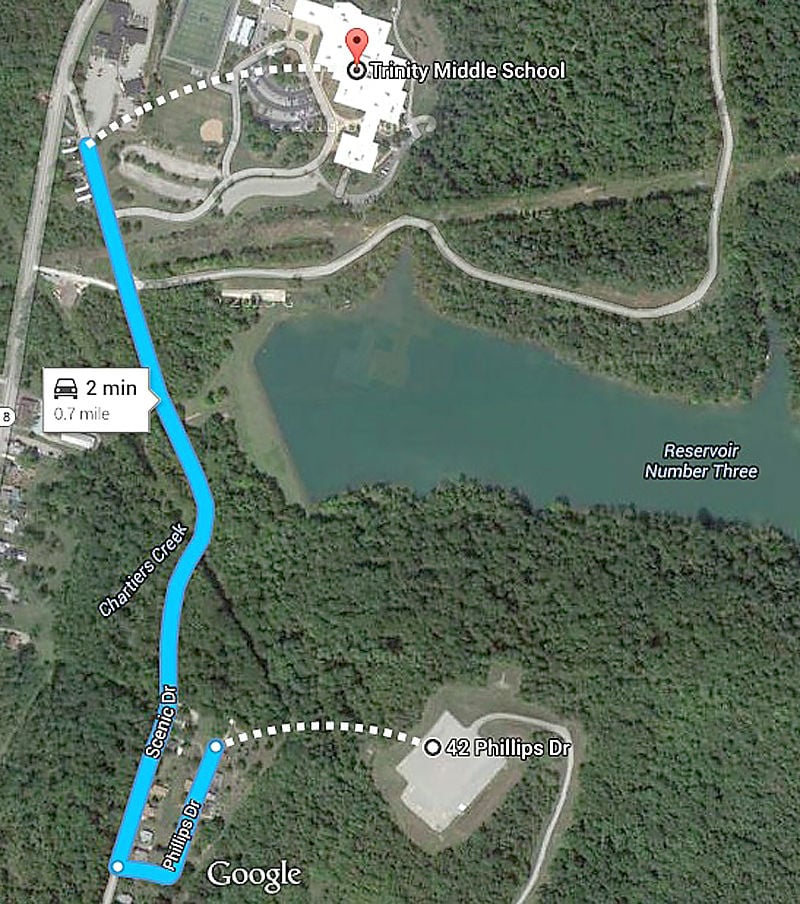 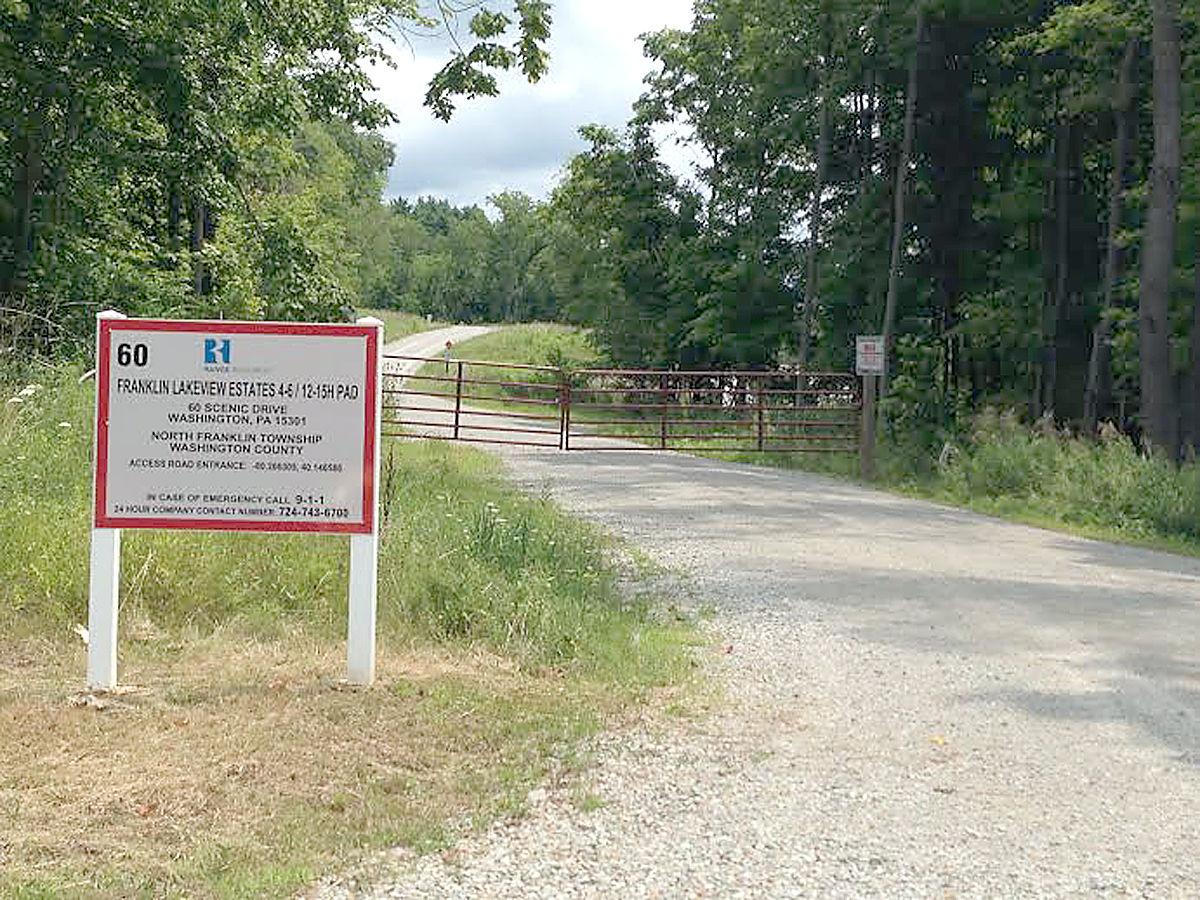 The access road for a Range Resources well pad is close to Trinity Middle School, but the well cannot be seen from the school because it is shielded by trees.

A Google maps image shows the distance - about 30,000 feet - from Fort Cherry schools to the Chiarelli well site.

The access road for a Range Resources well pad is close to Trinity Middle School, but the well cannot be seen from the school because it is shielded by trees.

Looking south from a parking lot at Trinity Middle School, one can see a glint of water through the trees – a reservoir. But not far beyond that, hidden from plain view, is a well extracting natural gas from deep beneath the earth’s surface.

If it weren’t for the royalty checks rolling into the district, administrators might not even know it was there.

Trinity is not an exception, either. Of the 19 public schools in Washington and Greene counties, nine are leaseholders – not including the Western Area Career and Technology Center, which was the first local school to sign on.

During the 2013-14 school year, the four schools whose wells are currently in production received almost $111,000 altogether in royalties. And when it comes to upfront money – bonus payments per acre of leased land – eight schools received nearly $2.2 million after signing leases between 2008 and 2014.

Fort Cherry School District, which has a lease with Range Resources, is touting itself as the latest success story. Royalty checks were trickling in and briefly stopped when a well at the Chiarelli pad went inactive in February, but now all seven wells are operational.

He said that money will likely be used to help offset the deficit and pay for pension and medical care costs for employees.

The Chiarelli well is about 3,000 feet from the school, separated by a hill. Sroka said some residents complained about the well site location, but more residents appreciated the industry’s business.

ChemRisk, a scientific consulting firm, conducted tests of the air quality while wells were being fracked and flared, and results “did not show anything remarkable with respect to chemicals detected in the ambient air.”

While Fort Cherry is on track to receive perhaps the largest royalty payment of any local district, Avella Area School District received the largest share last school year. Laura Shola, business manager, said the $58,227 won’t be set aside for a specific purpose, but “any additional money is helpful.”

Avella signed a lease with Range Resources in May 2011. Shola said there is no surface drilling on school property, but a well on neighboring property extracts gas from beneath the district’s 44.2 acres.

“Most of those leased are currently in units with laterals running under their property,” Range spokesman Matt Pitzarella said in an email.

Range Resources alone has paid almost $2 million to six of the schools it has leases with – Avella, WACTC, Burgettstown, Fort Cherry, Trinity and McGuffey – in both bonus payments and royalties since the districts became leaseholders. With the recent addition of Canon-McMillan, Range now holds leases with seven districts.

Pitzarella said constructing wells near schools typically requires more engagement because there are more parties involved in the lease. He said it’s common for Range to make site-specific enhancements based on leaseholder requests, host tours and open houses, and attend meetings to answer questions.

Several school administrators said natural gas royalties are especially helpful during a time when public education funding is on the decline.

Scott Martin, superintendent of Bentworth School District, said the board was considering drastic measures to cut costs for the 2011-12 school year, but a bonus payment of more than $200,000 from Range helped the district get back on its feet.

“Bentworth has been very fortunate. We have not had to furlough any teachers throughout all these cuts,” Martin said, adding that if the lease hadn’t been signed, the district “definitely would have looked at furlough, raising taxes – all of the above.”

Likewise, California Area School District was able to avoid furloughs in 2011 due to a $437,500 upfront payment it received from Rice Energy.

“It helped us at the time because of the number of cuts that were taking place in the state budget,” said Superintendent Brian Jackson.

However, Rice has not yet drilled the well, and the lease expires in June 2016.

Ringgold School District also had a lease with Chesapeake Energy, but it expired in December because a well was never drilled and the lease was not renewed. Business manager Randy Skrinjorich said the district is in talks with another drilling company for a potential lease.

This summer, Canon-McMillan became the most recent school to sign a lease with Range for nearly 27 acres of Wylandville Elementary School property, but the school has not yet received its bonus payment of $133,825. Business manager Joni Mansmann said Range has until Sept. 25 to execute the lease.

Canonsburg-based WACTC, which offers career training programs to high school students and adults, became the first local school to sign a lease with a drilling company in 2008.

Former school Director Joseph Iannetti, who has since retired, said fracking seemed like “science fiction” when a company started drilling a well on a neighboring farm six years ago. He said school administrators walked right up to site workers and asked how they could get involved, too.

After getting approval from the nine school districts served by WACTC, the school had a lease with Range Resources for 25 acres of school property.

“We jumped on it,” said Iannetti, but added that the school’s relationship with the industry “went way beyond monthly payments.”

Range donated materials to the school’s welding programs, and most recently helped fund a new welding facility – set to open soon – through its royalty payments.

“The bottom line is the kids benefitted from all of this,” he said.

But Range Resources isn’t the only player in the Marcellus Shale. Charleroi Area School District signed a lease in February with EQT for 81 acres of land and received a $283,850 upfront payment.

Board Secretary Becky Kline said the district intends to use the money to upgrade computer software and update the curriculum to align with state core standards.

West Greene School District is the only school in Greene County that holds a lease. The district signed with Vantage Energy for nearly 75 acres, but the well is not yet in production.

For a subject that can often turn into a heated debate between drilling supporters and activists, it may come as a surprise that most schools faced little, if any, opposition when they approved leases.

“Even though you think (our bonus payment of) $578,000 sounds like a lot of money, there are a lot of landowners in Washington County that have a lot more land than we do … It’s a nice help, but it’s just a one-time shot,” Burchill said. “The steady income over a long period of time would be beneficial, especially because the state funding of schools has been decreasing over the last several years.”