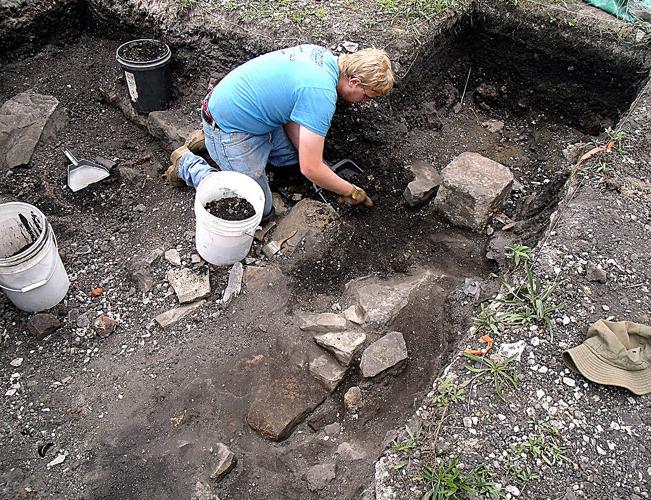 Volunteer Sean Rothaar cleans part of a foundation uncovered last year at the site of the old Snowden Iron Works in Brownsville. 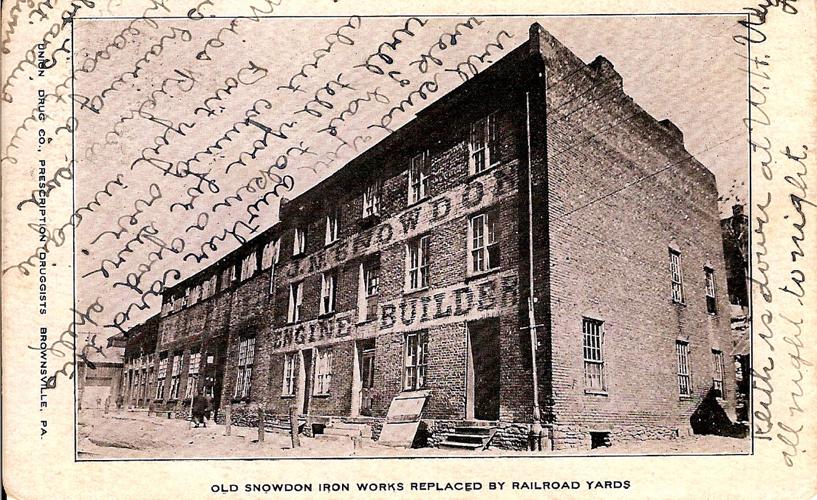 An old postcard shows Snowden Iron Works before it was razed to pave the way for Monongahela Railway in Brownsville in the early 1900s.

Volunteer Sean Rothaar cleans part of a foundation uncovered last year at the site of the old Snowden Iron Works in Brownsville.

An old postcard shows Snowden Iron Works before it was razed to pave the way for Monongahela Railway in Brownsville in the early 1900s.

BROWNSVILLE – Volunteer archaeologists looking for clues about workers who built the nation’s first cast iron bridge, along with steamboats used during the Civil War, may have to call off a dig at the site of the foundry in Brownsville.

Marc Henshaw, lead archaeologist at the former John Snowdon Vulcan Iron & Machine Works, said he needs to raise about $1,000 to purchase liability insurance for the job or Fayette County, which owns the property, won’t led him continue to work at the site.

“The preservation is really excellent,” Henshaw said. “We’d like to get a sample of the whole complex.”

Armed with volunteers, some from nearby California University of Pennsylvania, Henshaw began excavating the property behind the Flatiron Building on Market Street last May and uncovered part of a building’s foundation three feet under the surface. The foundation will serve as a starting point to assist in locating other buildings on the property alongside the Monongahela River.

The site is significant to U.S. history because it is where Snowdon cast Dunlap’s Creek Bridge in downtown Brownsville between 1836 and 1839, a span along an older section of the National Road that is still traveled to this day.

The foundry, which employed 110 workers, also created half of the mile markers along the National Road.

Bridge enthusiasts from across the country are drawn to the 80-foot-long span because it is a national landmark recognized as a breakthrough in technology by the American Society of Materials International, a distinction it also bestowed on the Statue of Liberty and Eiffel Tower.

Henshaw planned to spread the archaeology project over several years until the liability issue was raised. He also wants to raise another $500 for supplies through the website Kickstarter, a program that has experienced much success in funding mostly technology-related projects.

The dig has been challenging because workers need to chisel through stone and grit covering the property, remnants from the years it served as Monongahela Railways’ headquarters, beginning in the early 1900s.

The plant closed in 1889, and part of it later reopened as a tenement building for immigrant coal miners.

Henshaw is in Arizona finishing his doctoral degree and hopes to begin work again in Brownsville after he returns in May to teach an introduction to anthropology course at Cal U.

He said the dig would help to attract people to downtown Brownsville and serve to educate the public, hands on, about the region’s rich industrial heritage.

He also wants to create a mobile photograph and artifact exhibit on Snowdon to take to area historical societies to provide a broader awareness of local history.

For more information about the project, visit http://www.kickstarter.com/projects/casearchaeology/brownsville-archaeology-festival