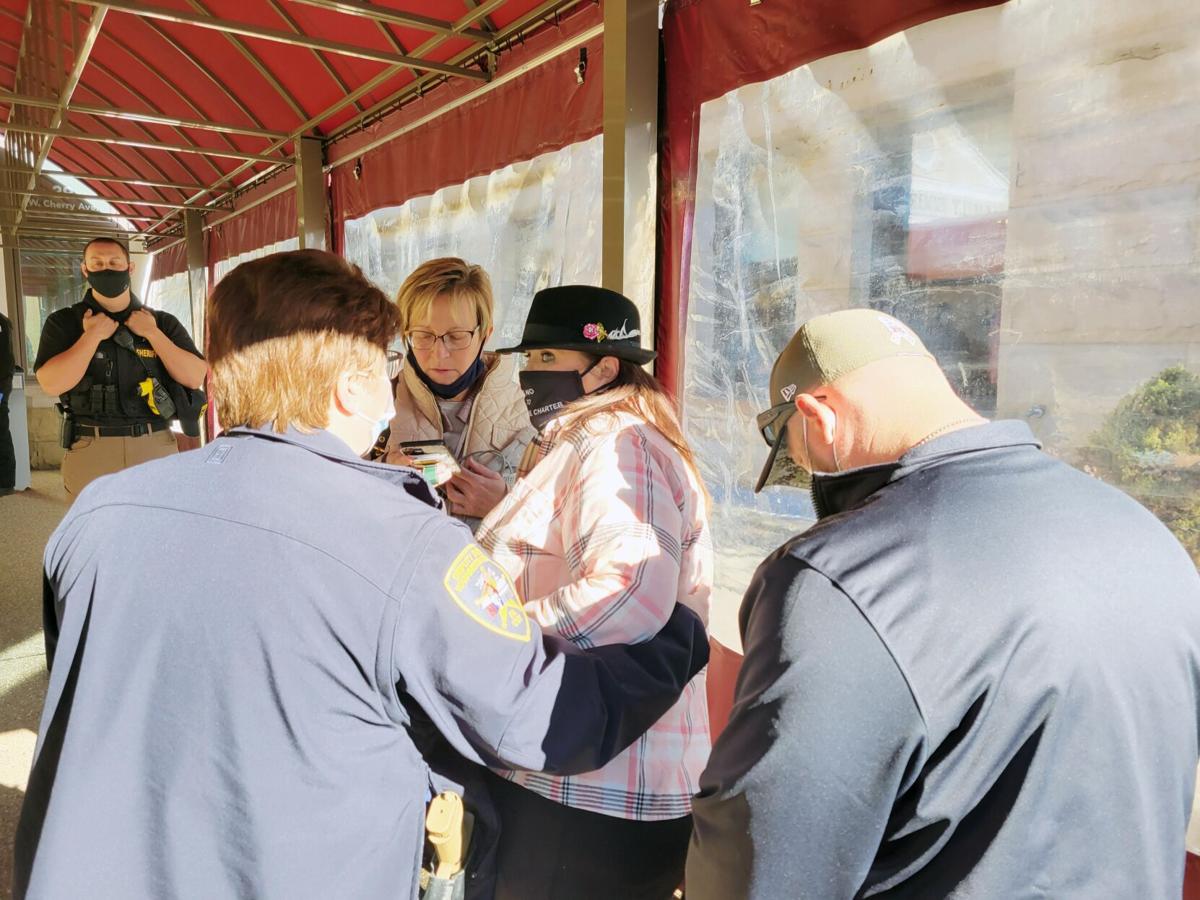 In this file photo taken Wednesday, Washington County Clerk of Courts Brenda Davis is detained by sheriff’s deputies outside the courthouse after refusing a court order to transfer juvenile case documents. She was later released, but purportedly went to an area hospital for treatment on an unspecified injury after being handcuffed by deputies. 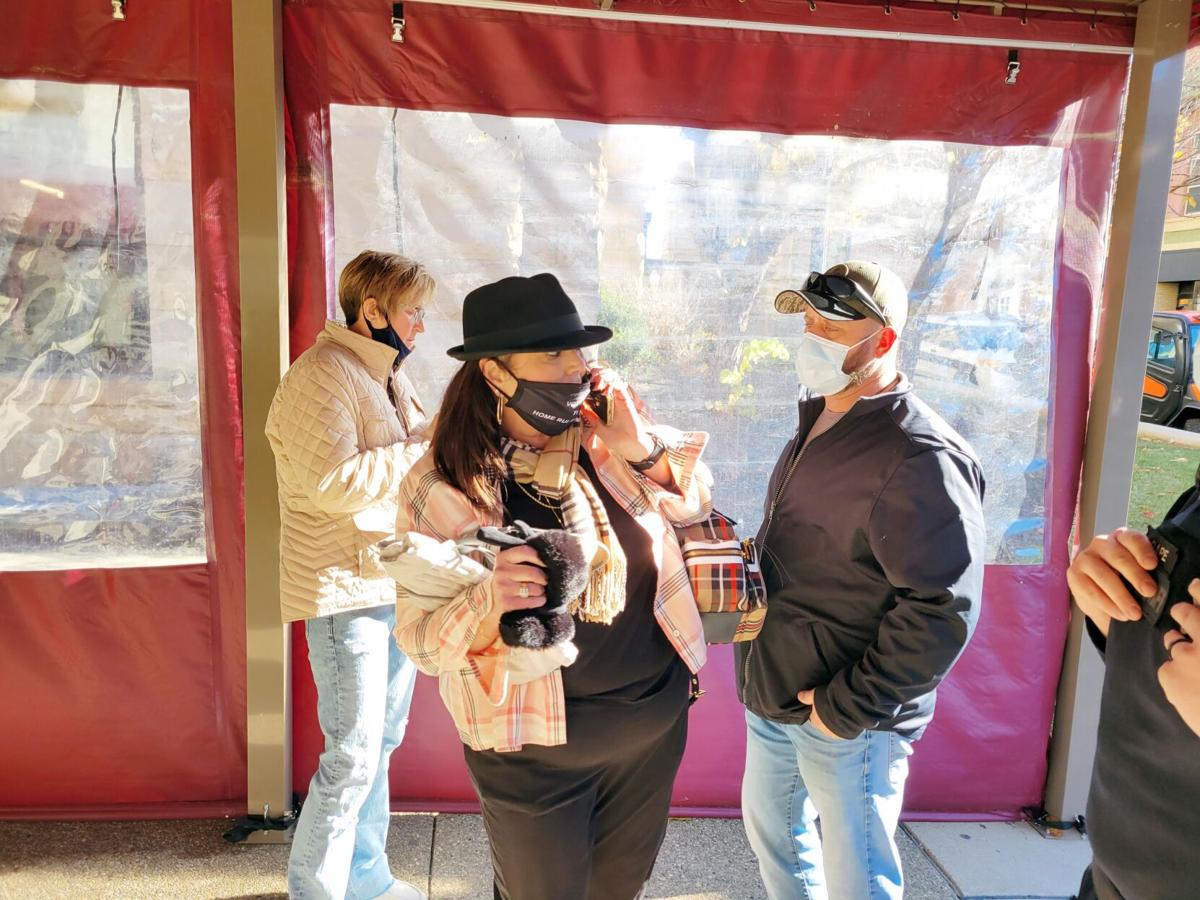 Washington County Clerk of Courts Brenda Davis talks on her cellphone Nov. 24 after refusing a court order to transfer documents from her office. She purportedly went to an area hospital for treatment of an unspecified injury after being handcuffed by deputies in the courthouse, although she was later released.

In this file photo taken Wednesday, Washington County Clerk of Courts Brenda Davis is detained by sheriff’s deputies outside the courthouse after refusing a court order to transfer juvenile case documents. She was later released, but purportedly went to an area hospital for treatment on an unspecified injury after being handcuffed by deputies.

Washington County Clerk of Courts Brenda Davis talks on her cellphone Nov. 24 after refusing a court order to transfer documents from her office. She purportedly went to an area hospital for treatment of an unspecified injury after being handcuffed by deputies in the courthouse, although she was later released.

Washington County Clerk of Courts Brenda Davis was placed in handcuffs by sheriff’s deputies Wednesday morning when she refused a court order to hand over juvenile case filings stored in her courthouse office.

Davis was later released after complaining of a back injury she allegedly sustained during the brief encounter.

President Judge John DiSalle filed an order earlier in the morning requiring Davis to allow the county’s Juvenile Probation Office to take custody of all juvenile delinquency and dependency cases from her office after she had waived many of those duties last month.

But when two sheriff’s deputies, a juvenile probation officer and Court Administrator Patrick Grimm went to the clerk of courts office about 9:30 a.m. in an attempt to serve the order, Davis refused to comply and went to the vault where the files are stored and closed and locked the door.

The two deputies then placed her in handcuffs, but they removed them when she complained of back pain. They then escorted her to DiSalle’s courtroom for a hearing, but she refused to go inside and eventually went back downstairs. Medics were called to the courthouse and checked her for injuries before releasing her.

Sheriff’s deputies then briefly detained Davis outside the courthouse’s side entrance on West Cherry Avenue, but they eventually allowed her to leave. She could be seen limping while walking on the sidewalk, and was purportedly taken in a private vehicle to an area hospital for unspecified treatment.

Davis declined to comment as she left the courthouse, but Prothonotary Lauren Hough, who witnessed part of the encounter, said deputies “manhandled” her while trying to serve the order.

“The sheriff’s deputies were pretty physical with her,” Hough said.

DiSalle called a hearing at about 11 a.m. to place on the record how the events transpired, although Davis was not in attendance.

Grimm testified they tried to serve DiSalle’s order, which stated sheriff’s deputies should “detain” Davis or any member of her staff for immediate contempt proceedings if they refused to comply. Grimm testified Davis began recording video of the encounter with her cell phone and told them she was an elected official and that she would not comply with the order. Hough then arrived to the office, Grimm said.

But Davis “argued” with deputies and then ran over to the vault door and slammed it shut before turning the lock, he said. The deputies then went over to place handcuffs on her as the argument escalated, Grimm said.

“She appeared to resist at one point,” Grimm said.

Sheriff’s Cpl. Edwin Schell testified she became “very argumentative” with them during the encounter, while Deputy Paul Rock said Davis continued to refuse to follow their instructions.

“She walked away from us numerous times,” Rock said.

After they removed the handcuffs upon her complaints of back pain, they attempted to bring her to DiSalle’s courtroom for apparent contempt proceedings. She refused to go inside and went downstairs before requesting to be checked by medics.

Attorney Sean Logue testified he was asked by DiSalle to “mediate or help in any way” with the transfer of juvenile documents, although he added he does not represent Davis or her office. Logue said he saw 20 juvenile probation officers walking down the hallway, presumably to carry the boxes of documents, but he felt they were intimidating. He added that Davis complained of heart palpitations and arm pain, prompting the medical attention.

“It was never suggested we interfere with the medical (care)?” DiSalle asked Logue rhetorically. “That was our primary concern.”

Grimm said this has been a long, drawn-out process with Davis ever since she waived numerous duties of her office in June after several of her workers were transferred to adult probation. More workers were transferred out earlier this month after she waived additional duties involving juvenile filings in October, prompting an argument between her and Commission Chairwoman Diana Irey Vaughan at the Nov. 4 commissioners meeting over the decision. Irey Vaughan requested sheriff’s deputies to come into that meeting to maintain order, although Davis was permitted to stay.

Davis tried to appeal the decision and return some of the duties to the office, but DiSalle’s order took precedent over her requests.

“It wasn’t as if we just showed up today and she had no idea why we’re doing this,” Grimm said.

At the end of Wednesday’s hearing, DiSalle ordered Deputy Clerk of Courts Regina Lindley to facilitate the transfer of the juvenile case files in Davis’ absence. Lindley said she would, although she was concerned about what would happen if Davis returned and continued to block the transfer. It was not known if Davis ever returned to the courthouse Wednesday.

“I’m going to send you down with a couple of deputies to make sure this gets done,” DiSalle told Lindley.

It was not known what would happen next in the long-simmering dispute between Davis, DiSalle and the county commissioners that finally boiled over Wednesday. DiSalle declined to say whether he would begin contempt proceedings against Davis next week when the courthouse reopens after a four-day weekend for the Thanksgiving holiday.