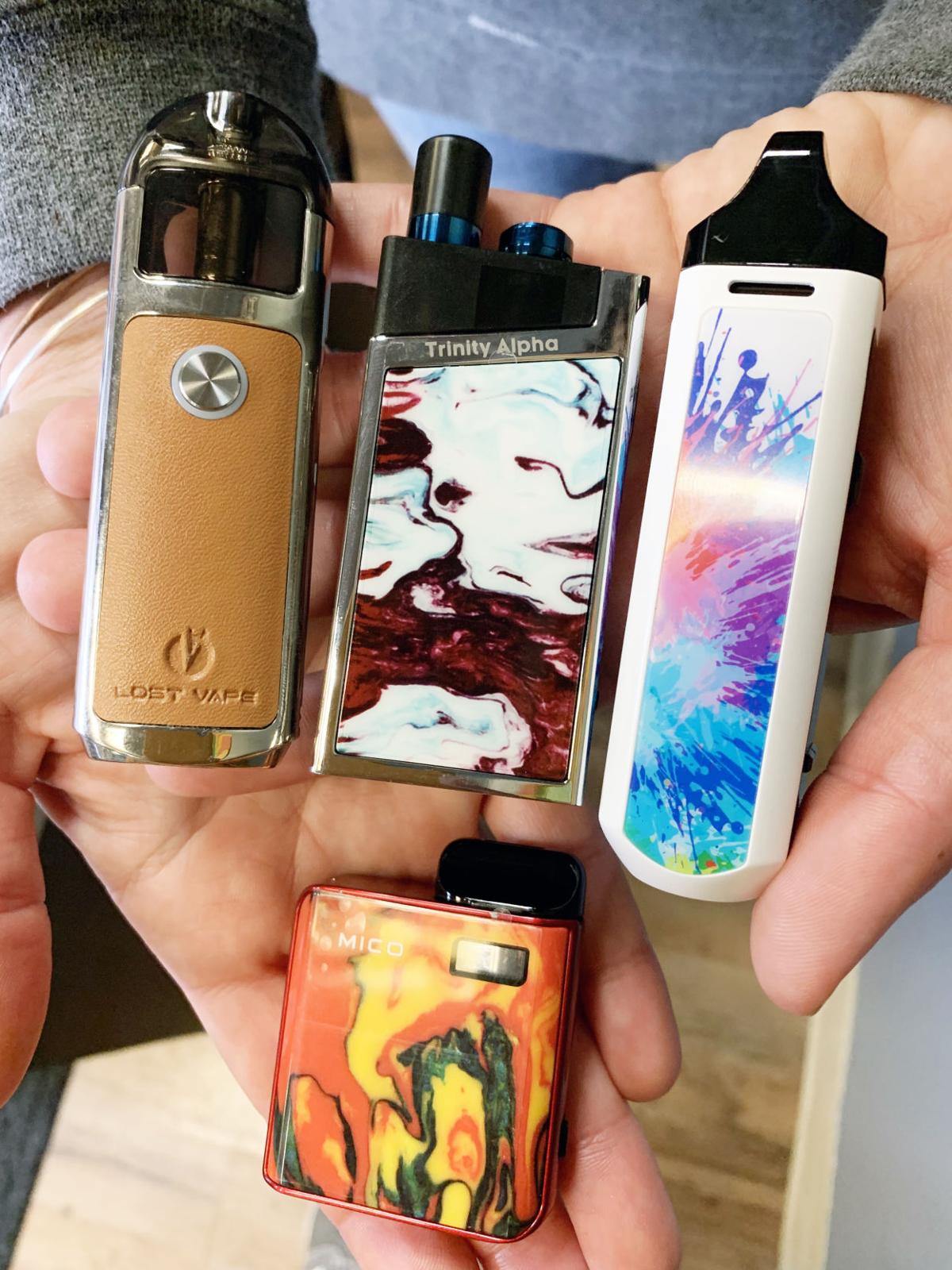 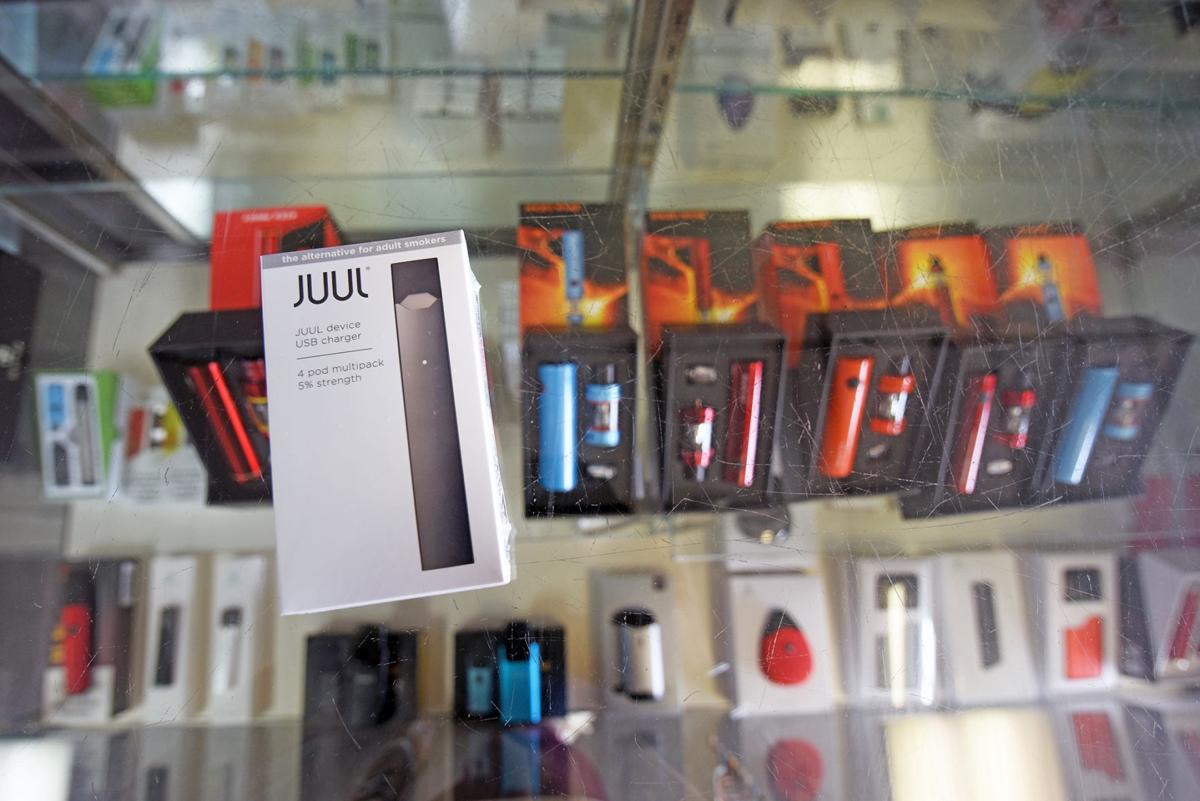 Juul is a popular device among high school students. 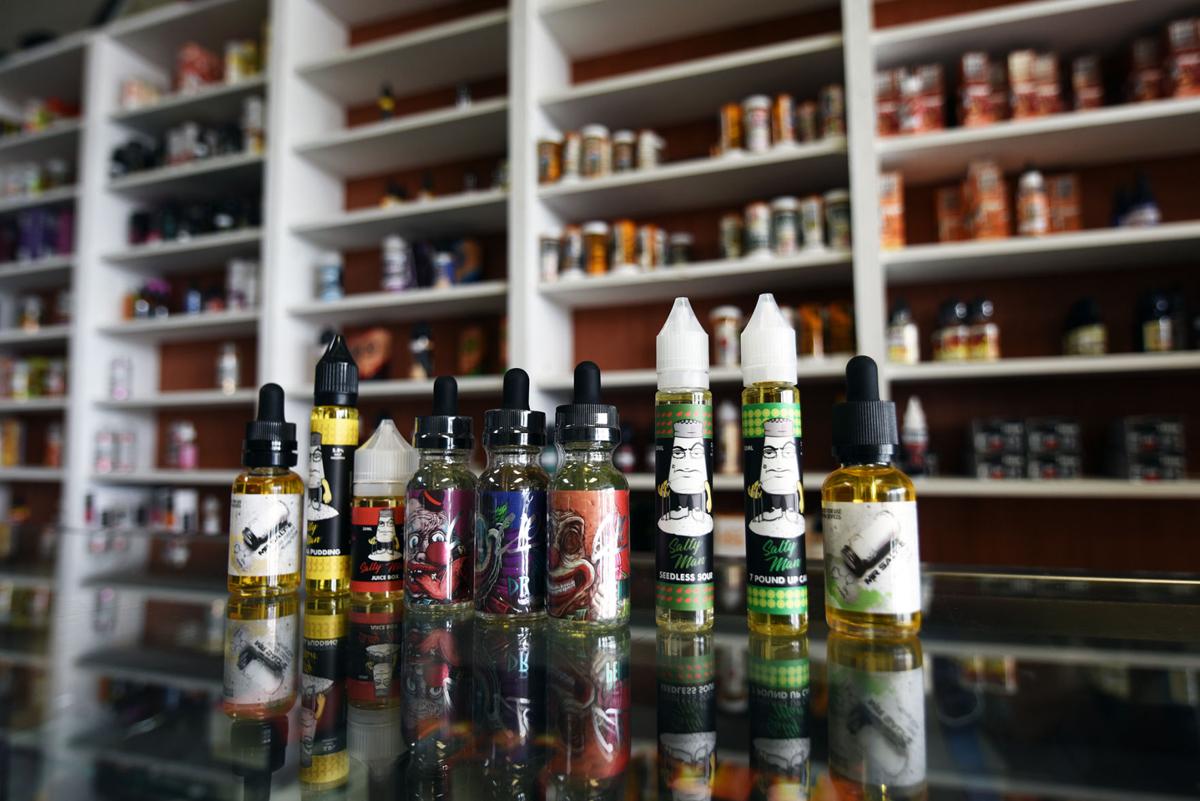 Nicotine salt ejuice, according to vaping.com, is easier to inhale because it is less harsh on the throat than regular ejuice. It also allows the user to inhale more nicotine per puff. It is the type most commonly found in pod-mod-style devices.

Juul is a popular device among high school students.

Nicotine salt ejuice, according to vaping.com, is easier to inhale because it is less harsh on the throat than regular ejuice. It also allows the user to inhale more nicotine per puff. It is the type most commonly found in pod-mod-style devices.

On a recent Thursday night, a young man sat in a chair at Washington Crown Center and took a hit from a vape pen.

The outbreak of lung illnesses and deaths associated with vaping concerns him, he said, but not enough to make him stop vaping.

“I feel people are getting sick from the ones they buy offline, not the ones they get from reputable stores,” he said. “Yeah, it’s a concern, but we’re all gonna die sometime.”

The number of people suffering from severe lung illnesses related to vaping reached 1,479 this week, with cases being reported in almost every state.

The U.S. Centers for Disease Control and Prevention reported Thursday 33 deaths have been confirmed in 24 states.

The state Health Department is investigating more than 63 other cases.

“What we are seeing is truly a public health emergency in Pennsylvania,” Secretary of Health Rachel Levine said earlier this month.

Doctors are concerned about growing number of severe pulmonary disease associated with vaping.

“It’s a very serious thing. People should pay attention to it and not take it lightly,” said Dr. Tariq Cheema, a pulmonologist with Allegheny Health Network. “You can have completely normal lungs and end up on a ventilator.”

Cheema said he and his colleagues at AHN have seen an increase in asthma and asthma-related problems among teens who vape. The hospital also had a pneumonia case he suspects was related to vaping.

The CDC and other investigators have not yet identified a specific product or ingredient to link the cases.

However, the CDC says most of the people who suffered lung injuries from vaping were using products containing THC, particularly those obtained off the street.

In a statement posted Thursday on its website, the CDC said, “We recommend that you should not use e-cigarette, or vaping products that contain THC.”

It further warned, “Since the specific cause or causes of lung injury are not yet know, the only way to assure that you are not at risk while the investigation continues is to consider refraining from use of all e-cigarette, or vaping products.”

Nate Moore, manager of House of Vapes, a vaporizer store in Washington Crown Center, said the recent reports of illnesses have impacted business, and more customers are asking questions about the products before purchasing.

“People shouldn’t get anything off the street or anything made on the black market,” said Moore. “People are also taking different products and mixing them with THC.”

He believes small businesses like House of Vape, that sell vaporizers and vaping fluids as a substitute for smoking, are “taking the blame for products that are sold illegally on the black market.”

Cheema said when e-cigarettes were introduced, physicians viewed it as a viable alternative to quitting cigarettes.

“But what has happened is the market has really exploded, and so many small places opened up and because it’s not FDA-regulated, we have no clue what chemicals they put in there,” said Cheema. “You cannot trust what’s in these products.”

School districts have seen an increase in the use of e-cigarettes and vape pens among high school students, and have taken steps to educate teachers, parents and students about the dangers associated with the products.

School districts also have updated drug and alcohol policies to keep the devices off school grounds.

Canon-McMillan School District Superintendent Michael Daniels said the district’s policy prohibits the use of e-cigarettes and devices in and around all school facilities.

“We are learning the importance of vape device users to be aware of the documented harmful effects of vaping,” said Daniels, citing the CDC statistics regarding e-cigarette and vaping-related illnesses and deaths. “This is a very real problem, and users are encouraged to understand the releveance of the research and the documented harmful, negative, life-ending effects.”