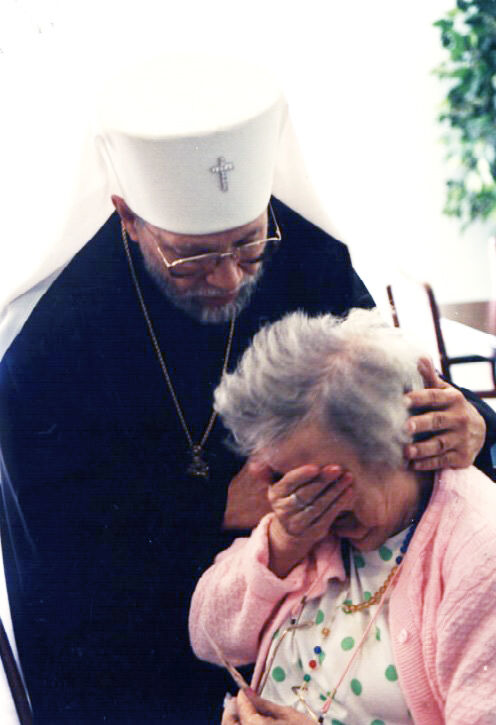 Met. (Lazor) Theodosius comforts a grieving woman. Met. Theodosius, who was born in Canonsburg, went on to serve as Primate of the Orthodox Church in America, the highest position in the church. 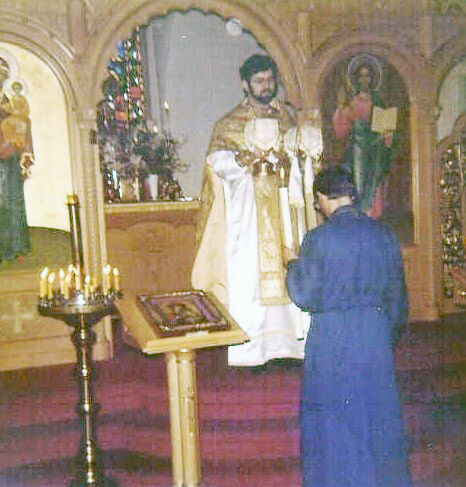 In this photo, Met. (Lazor) Theodosius served as altar boy to Fr. Alexander Federoff of Holy Virgin Orthodox Church in Carnegie the day after he ordained Fr. Federoff. Fr. Alex served his first Liturgy alone, in order to practice, and it was a display of humbleness for the head of the Orthodox Church in America to serve as an altar boy. 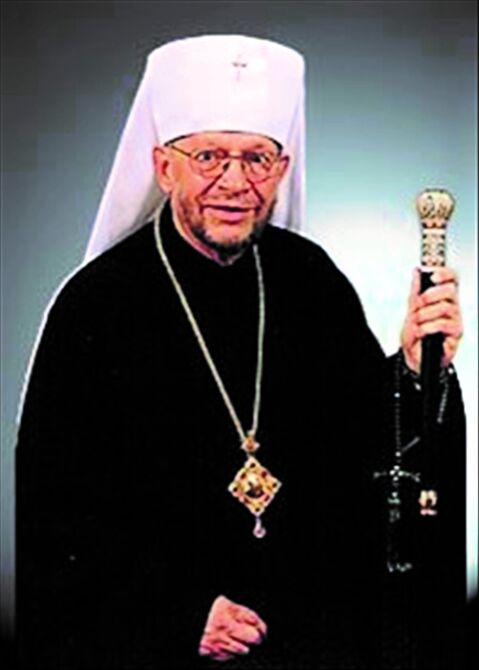 Met. (Lazor) Theodosius comforts a grieving woman. Met. Theodosius, who was born in Canonsburg, went on to serve as Primate of the Orthodox Church in America, the highest position in the church.

In this photo, Met. (Lazor) Theodosius served as altar boy to Fr. Alexander Federoff of Holy Virgin Orthodox Church in Carnegie the day after he ordained Fr. Federoff. Fr. Alex served his first Liturgy alone, in order to practice, and it was a display of humbleness for the head of the Orthodox Church in America to serve as an altar boy.

In his hometown of Canonsburg – and across the United States – people are mourning the loss of Metropolitan (Lazor) Theodosius and pausing to remember a man who championed kindness, love and respect for all.

Met. Theodosius, whose health declined after a series of strokes he suffered in 2000 and 2001, died on Monday at the age of 86.

Met. Theodosius, who was born Frank Lazor, served as Primate of the Orthodox Church in America – the church’s equivalent of the Catholic pope – for 25 years, and became one of the towering religious figures of his time.

He served as a religious adviser for former presidents Bill Clinton and George H.W. Bush, who sought his advice on religious and political issues in various parts of the world.

During the crisis in Kosovo, he spoke in defense of the rights for all people in the region and called for Clinton to end the NATO air campaign.

Met. Theodosius also met with other national and foreign political and religious leaders across the world, including three popes.

But, said Protodeacon John Oleynik, of St. John the Baptist Orthodox Church in Canonsburg, where Met. Theodosius spent his youth, his passion for his vocation was matched by his love for life and for people.

“He made everyone he met feel special,” said Oleynik. “He had a penchant for names and faces, and everyone that I know commented on the fact that if he met you one time, he’d remember your name. He made everyone feel loved.”

“He radiated joy. He had a wonderful sense of humor. He was probably the most personable bishop I have ever met,” said Oleynik. “He was full of life, and he enjoyed life.”

Among the things that delighted him were peanut M&Ms and roller coasters.

The Rev. Andrew Nelko of St. John the Baptist Church in Campbell, Pa., recalled an encounter with Met. Theodosius at the All American Council in Florida in 2002, after Met. Theodosius had retired.

“He was very animated and excited, and he said, ‘I just rode a roller coaster at Disneyland,” recalled Nelko. “He just had an aura about him, and it was a pleasure to know him.”

Met. Theodosius took a deep interest in everybody.

He sent cards prolifically, for birthdays, anniversaries, deaths and graduations, and he enjoyed sending flowers to friends and family, sometimes for no special occasion.

Parishioner Richard Blaha, who knew Met. Theodosius for about 35 years and who, along with his wife, Sonia, developed a deep friendship with, said Met. Theodosius was one of the most gentle and humble men he ever met.

Blaha recalled that the first time he met Met. Theodosius, he was surprised to see the highest-ranking member of the church sitting in a pew in a monk’s robe.

Met. Theodosius received near universal respect and admiration from the people he encountered.

Among the places Met. Theodosius served was Alaska, where he was the diocesan Bishop of Sitka and Alaska from 1967 until 1972. During his tenure, he oversaw the rebuilding of the historic Archangel Michael Cathedral in Sitka, which had been destroyed in a fire.

While serving as Bishop of Alaska, the Alaskan people adopted him into an indigenous clan as a sign of admiration for his service.

Met. Theodosius was the son of John and Mary Lazor, who immigrated to Canonsburg from Galicia, now the southeastern corner of Poland.

He served as altar server at St. John the Baptist Orthodox Church. Met. Theodosius’s cousin, Fr. Paul Lazor, served at the church with him, and went on to serve at St. Vladimir Theological Seminary.

Olga Rusinko, a lifelong friend of Met. Theodosius, attended church and youth group meetings with him when they were growing up, and they graduated together from Canonsburg High School in 1952.

“He was always there for everyone. He had so many friends,” said Rusinko. “He was a people person. He was very, very friendly and outgoing,” she said. “He was very devoted to the church, but he was very down to earth. He was just one of us. He meant an awful lot to us all.”

Dolores Schinosi of Canonsburg grew up with Met. Theodosius and, like everyone in the neighborhood, called him Frankie.

She also was friends with his siblings, and recalls how they often traded comic books at Met. Theodosius’s brother’s house.

“I was truly saddened by the passing of Met. Theodosius. Growing up, I was always in his presence in church or around his family, and I found him to be full of energy, kind, and friendly. Most of all, he had a great sense of humor,” said Schinosi. “I felt it was an honor and privilege to have him return to Canonsburg after his retirement to spend his last years with old friends and family.”

Met. Theodosius graduated from Washington & Jefferson College, and worked throughout college to earn money for tuition. After graduation, he enrolled in St. Vladimir’s Orthodox Theological Seminary, and was awarded a master of divinity degree in 1960.

“He didn’t come from means. His first job was as a dishwasher at Jimmy’s Restaurant, and he enjoyed that,” said Oleynik. “He was a hard worker.”

Blaha said Met. Theodosius believed that there was no task beneath him, including sweeping the church.

Despite his humility, Met. Theodosius “had a presence,” said Archbishop Joseph Oleynik. “He became the face of the Orthodox Church in America, and he represented the church throughout the world,” he said.

In July 2002, Met. Theodosius retired from the office of Metropolitan of All America and Canada, citing the responsibilities of the office too demanding as he dealt with health issues caused by his strokes.

He returned to Washington County, where he attended services at his hometown church and deepened his relationships with the people in his community.

As his health continued to fail, clergy and parishioners cared for him while he continued to live in his home. He finally moved to an assisted living facility, and later a nursing facility in the last years of his life.

But he never complained.

“No matter how sick he was, he was the first to offer you a blessing and ask how you were doing,” said Blaha.

Met. Theodosius never lost his quick wit, but Blaha said it was difficult for the clergyman, because of COVID-19, to have limited access to family and friends.

Met. Theodosius’ death set in motion a series of rituals in preparation for his burial. On Wednesday, visitation and Panikhida were held at the church, and on Thursday, visitation was offered before the Office of the Burial for a Hierarch.

On Friday, Met. Theodosius will be laid to rest at the Monastery of the Holy Transfiguration in Ellwood City, which he had supported for decades and where he wished to be interred.

“He’ll be sorely missed,” said Blaha. “He had that demeanor that he wanted to listen and talk to all people. For him, it was all about being kind to others and having respect for everyone.”