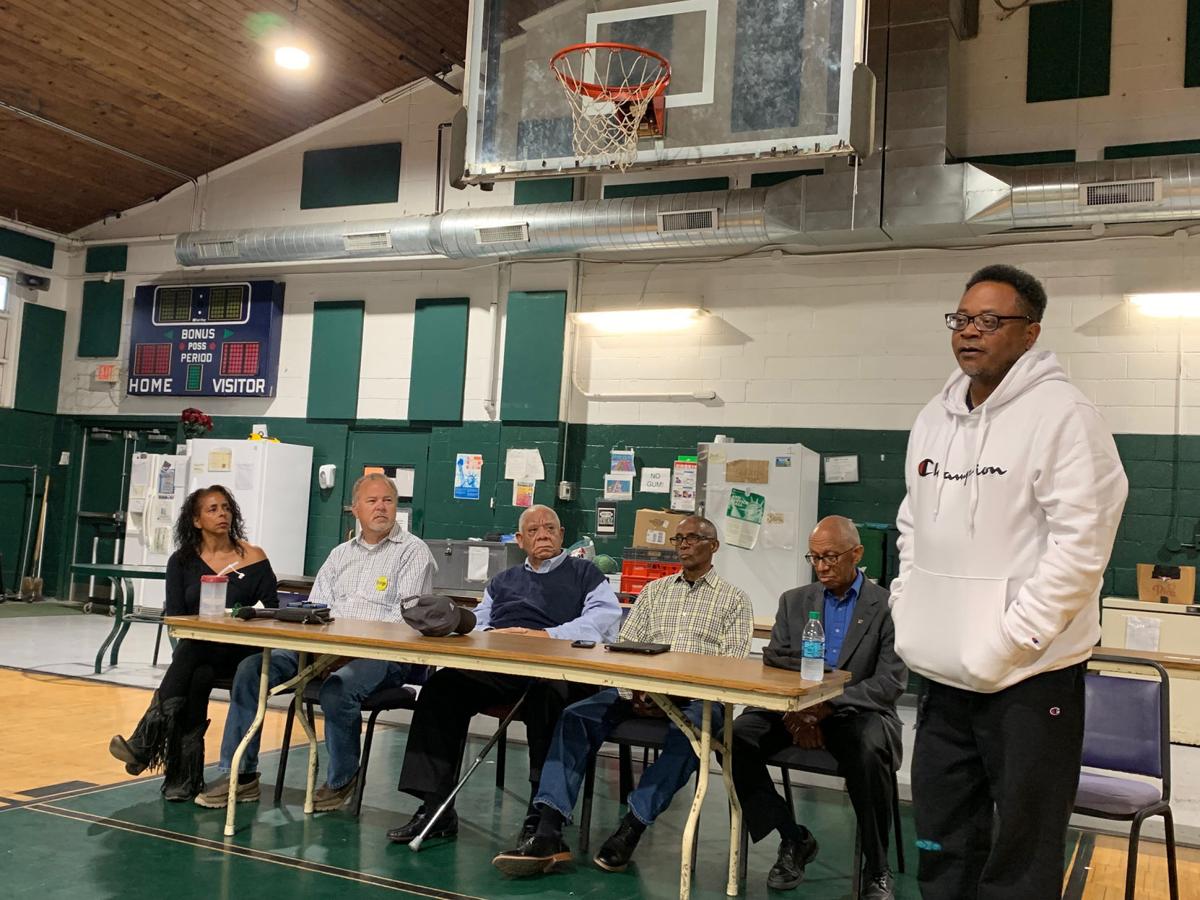 Don Ward, right, an employee of LeMoyne community center, discussed his September encounter with police, who he said detained him while he was walking on and near the grounds at night. The community center organized a meeting Wednesday to discuss relations between city police and community members. From left are Tom Flickinger, James "Cookie" McDonald, Dean Ellis and current NAACP president Dr. Andrew Goudy. 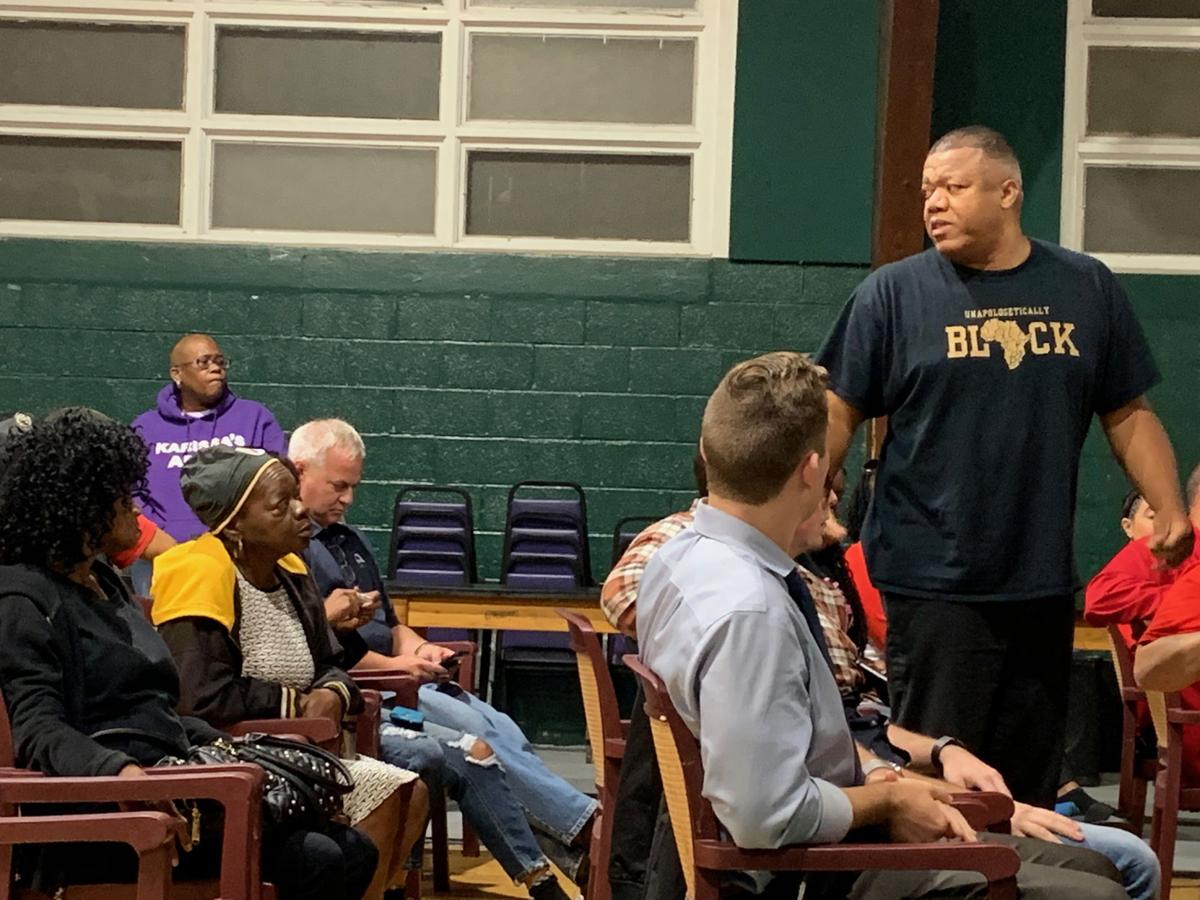 Residents discussed the relationship between the African-American community and city police Wednesday during a meeting at LeMoyne community center.

Don Ward, right, an employee of LeMoyne community center, discussed his September encounter with police, who he said detained him while he was walking on and near the grounds at night. The community center organized a meeting Wednesday to discuss relations between city police and community members. From left are Tom Flickinger, James "Cookie" McDonald, Dean Ellis and current NAACP president Dr. Andrew Goudy.

Residents discussed the relationship between the African-American community and city police Wednesday during a meeting at LeMoyne community center.

Members of the city's African-American community who gathered Wednesday night to discuss a police encounter with a LeMoyne Community Center employee that he described as "aggressive" said they want real changes in the police department's relationship with minorities.

The meeting, held at the community center, was called by the center's executive director, Joyce Ellis, in the wake of a formal complaint filed with the police department by Don Ward, the groundskeeper, who claims an officer acted aggressively toward him Sept. 27 while he was walking outside the center.

Washington Mayor Scott Putnam did attend the meeting, but he said he did not direct police Chief Robert Wilson or police officers on the force to appear.

"This is important. Police officers from the city of Washington needed to be here to hear this, to hear our concerns," said resident Linda Harris, a retired deputy superintendent at SCI Fayette.

A panel including current NAACP Washington Branch President Dr. Andrew Goudy and former NAACP presidents James McDonald, Robert Griffin and Dean Ellis talked about their personal experiences with police officers, the distrust between the black community and police, and the need to improve the broken community-police relations.

Griffin, the father of three sons, age 22, 19 and 15, admitted, "There are times that I worry about them when they walk out the door."

"Depending on how they comport themselves, they could put themselves in a bad situation to be injured, maybe even killed. Maybe that's an unhealthy fear, but that's my reality," said Griffin. "So I've had to explain to them how to conduct themselves if they interact with law enforcement - to be respectful, to speak clearly, to behave properly - because I fear for their safety if they don't comply with instructions. I don't feel like I should have to have the conversation with my kids just because of the color of my skin, but that to me is a fear, it's reality. I don't know any person of color, black men, that at some time in their lives have not been profiled or looked upon differently because of the color of their skin."

Don Ward, 54, a military veteran and former corrections officer who helps with after-school programs at the center, said he had returned to the center that night, around 9:30 p.m., to turn off a light that had been left on in the kitchen.

Ward, who participated in the meeting, said he was locking the gate to the playground when he noticed a group of people near the back of the property, so he went to investigate and "to show my presence."

He said a police officer spotted him as he was walking between two Lincoln Terrace apartment buildings across the street from the community center and shouted "Can I help you?" in an aggressive voice.

Ward said two or three police cars arrived and after a tense exchange, police told him he was being detained and needed to provide his driver's license.

Community members pointed to a disproportionately small number of African-American officers, noting only one black officer serves on the city police department.

Putnam said during the last round of civil service testing, only one of the 31 candidates was black.

Those at the meeting also asked for police to have more frequent positive interactions with neighborhood residents.

Putnam said that's encouraged, but because of minimum staffing, it doesn't happen as often as it should.

Those who attended also noted the gulf between how black America and white America experience police is wide, and they fear police do not defend the rights of African-Americans as vigorously.

"Let's not just talk about it, let's be about it," said Ellis. "We can't just leave tonight without anything coming out of it."