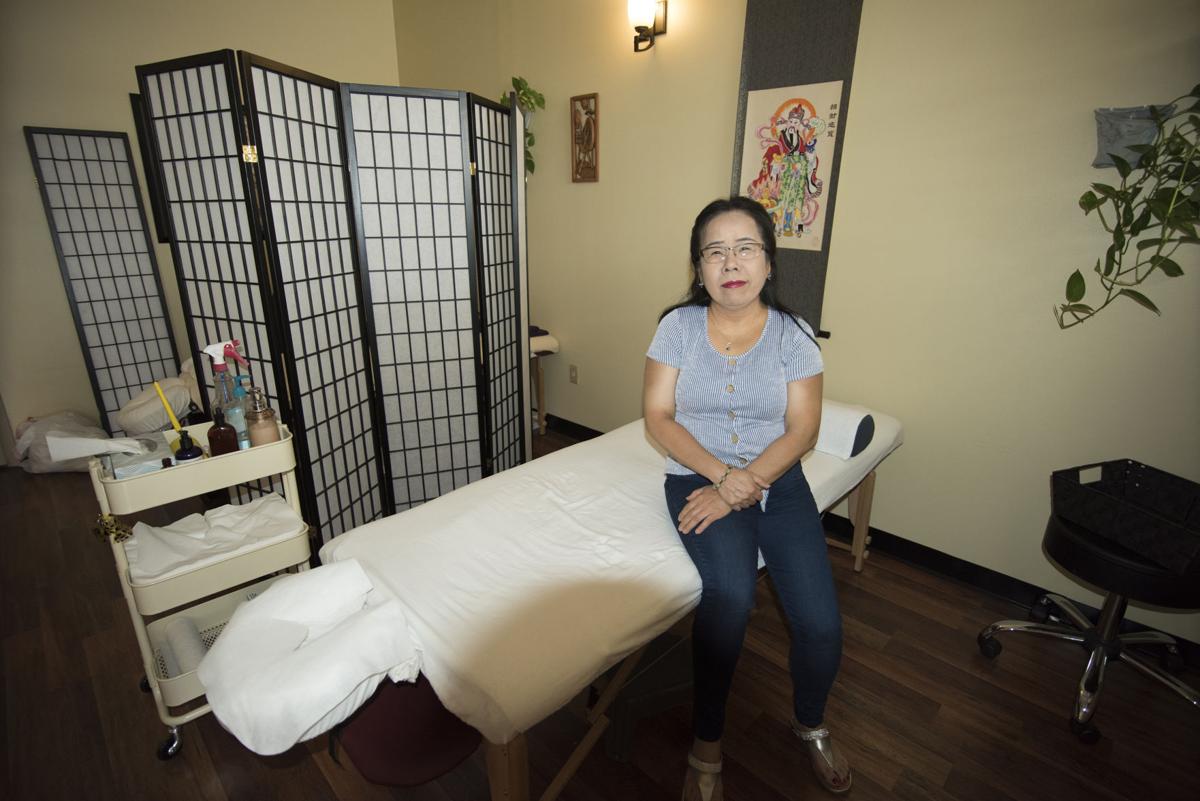 Guihua (Nancy) Zhang at her business, Acupressure Reflexology Works in Washington, on Wednesday 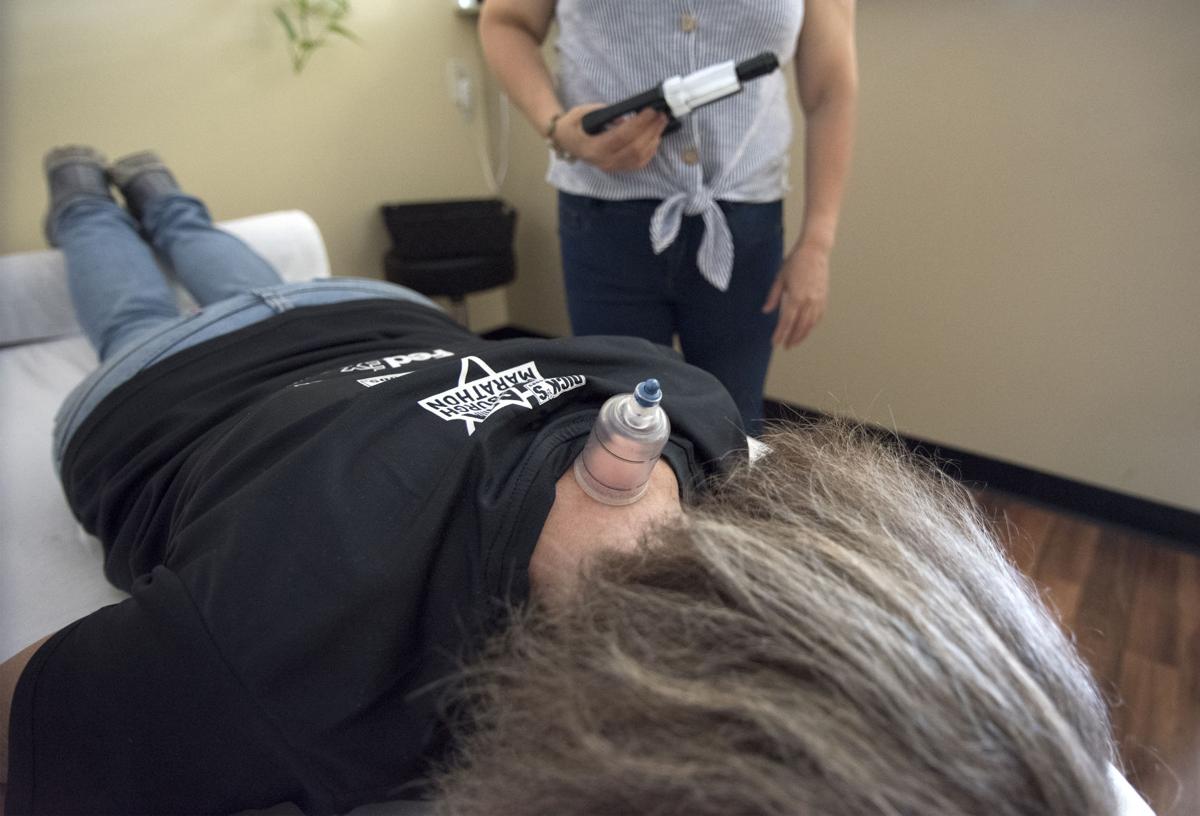 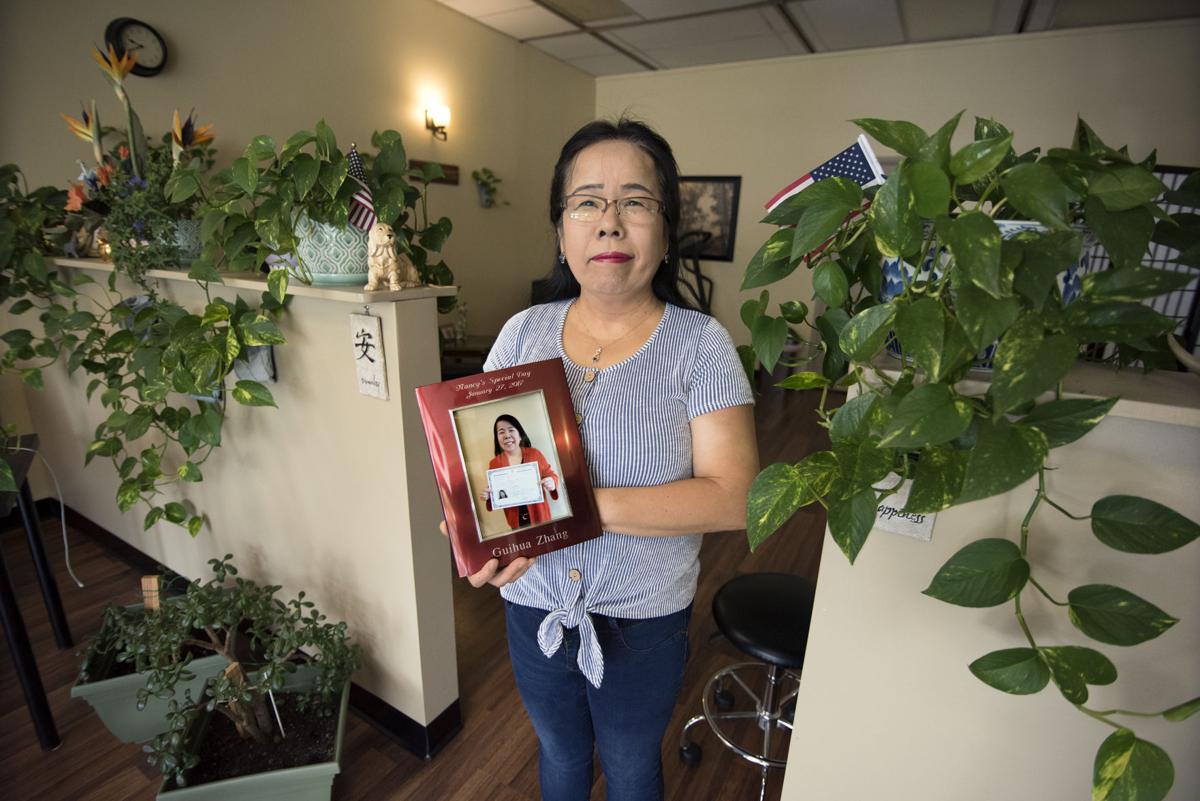 Guihua (Nancy) Zhang holds a photo of herself when she became a U.S. citizen. 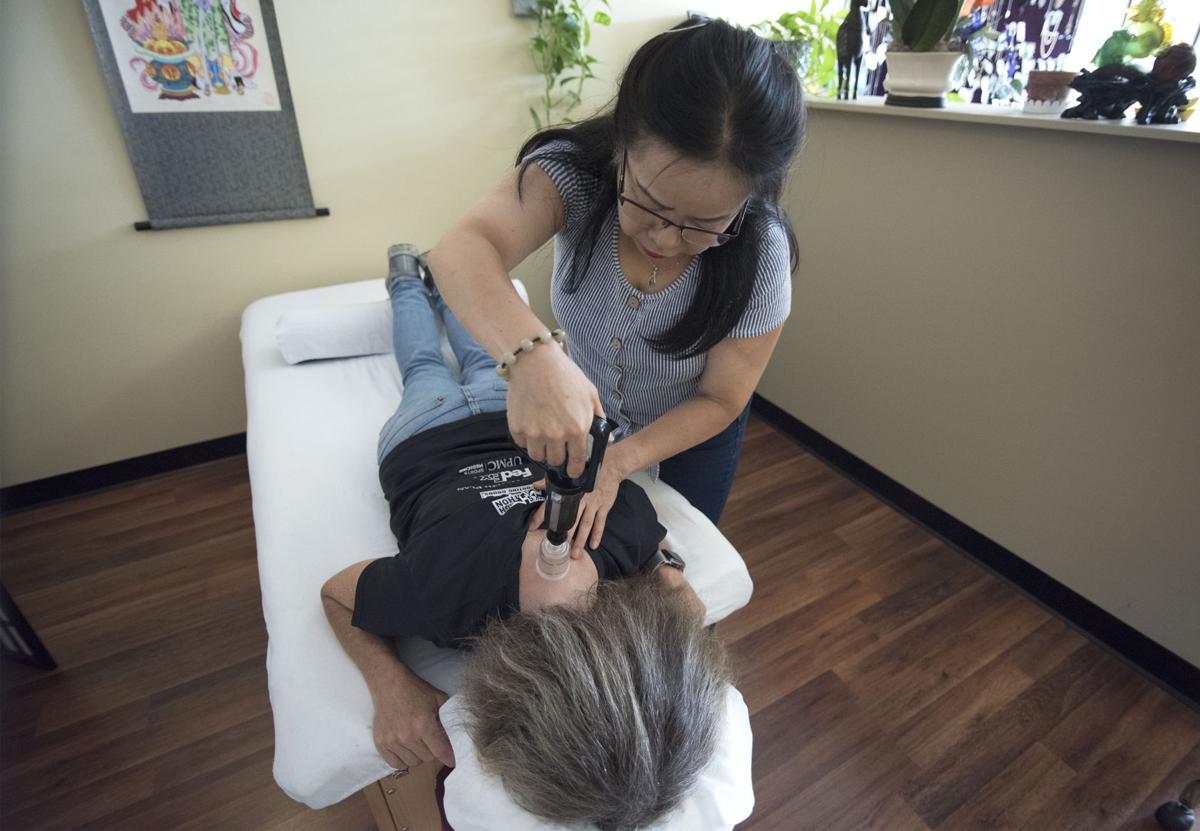 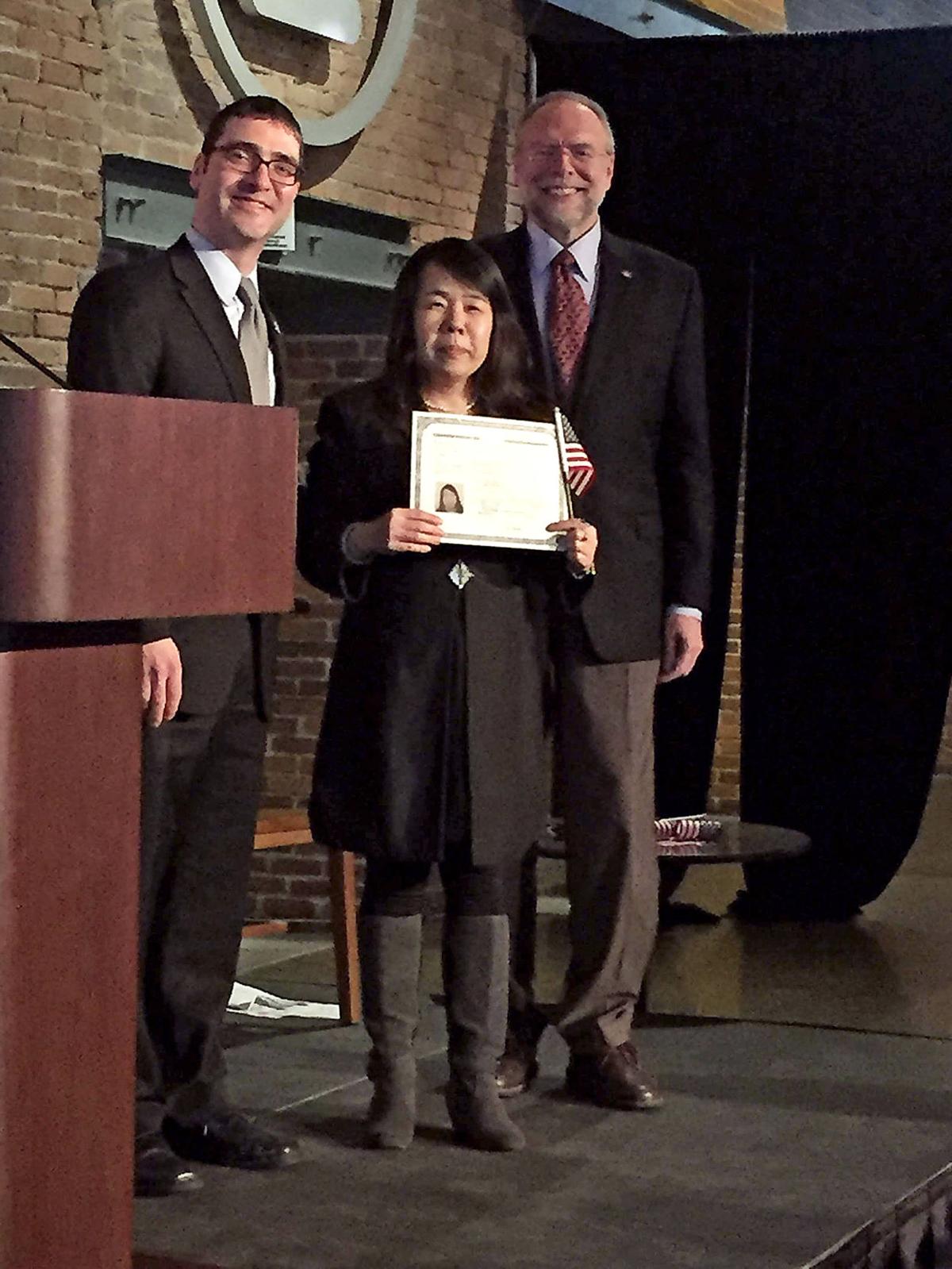 Guihua (Nancy) Zhang on the day she became an American citizen 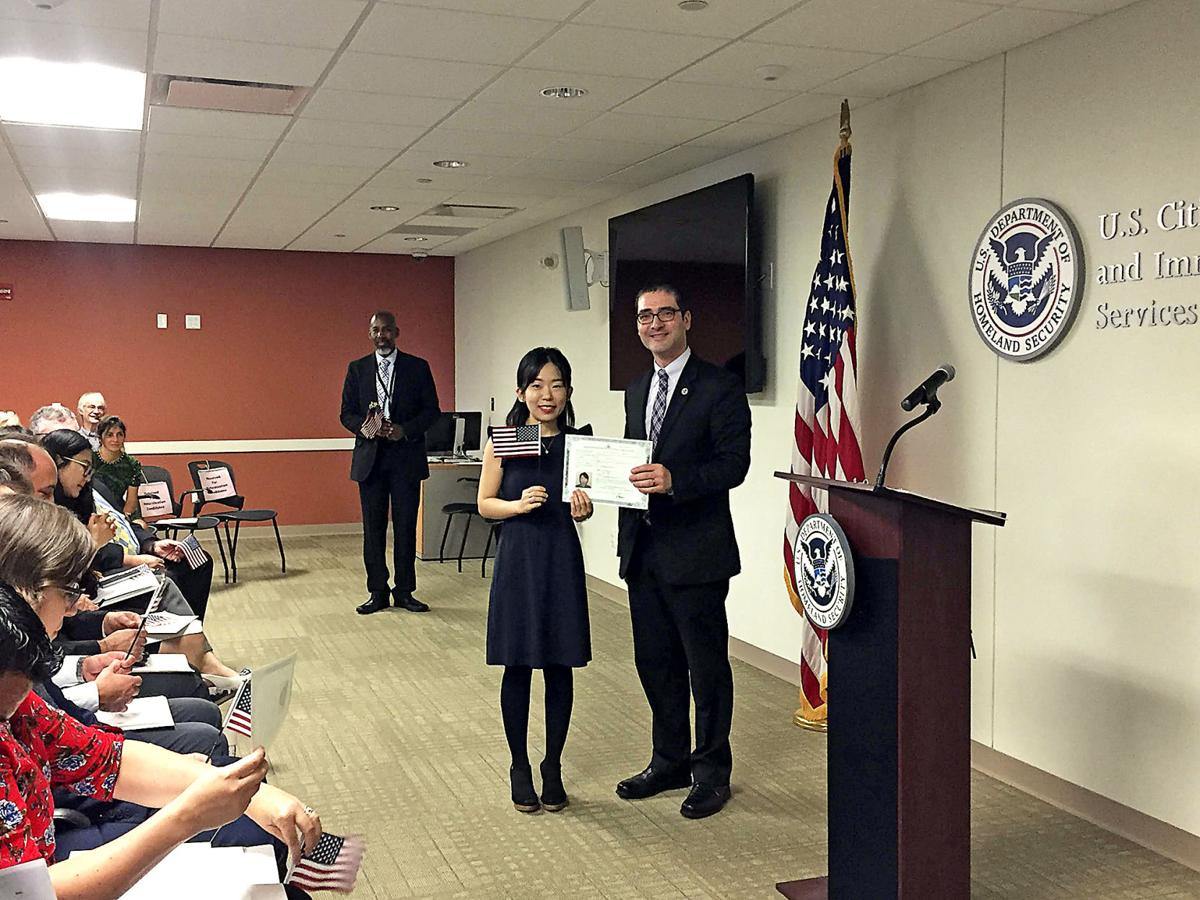 A photo of Guihua (Nancy) Zhang’s daughter, Amy, when she became a U.S. citizen.

Guihua (Nancy) Zhang at her business, Acupressure Reflexology Works in Washington, on Wednesday

Guihua (Nancy) Zhang holds a photo of herself when she became a U.S. citizen.

Guihua (Nancy) Zhang on the day she became an American citizen

A photo of Guihua (Nancy) Zhang’s daughter, Amy, when she became a U.S. citizen.

This is one in a series of stories about immigrants in our area.

Guihua Zhang is the owner of Accupressure Reflexology Works, an alternative medicine shop at Jefferson Court Plaza in the city of Washington.

Since the shop opened in 2013, Zhang, also known as Nancy, has established a large following of loyal clients.

Her success would be an achievement for anyone, but it is especially rewarding for the 56-year-old Zhang, an immigrant businesswoman who came to the United States carrying a suitcase and $1,000.

But her journey has been a test of persistence and determination. When Nancy came to America, she didn’t know a single person and she didn’t speak English.

The day after Nancy arrived in the United States, she got a job busing tables at a Chinese restaurant in Minneapolis.

Nancy worked for seven years at various Chinese restaurants and massage shops – often seven days a week – and sold jewelry and accessories in Minneapolis, Chicago and California to earn money.

At one point, she lived with five other women in a one-room hotel room with bunk beds. She lived frugally and bought only necessary essentials.

Nancy recalled waking up one night in the shared room with a cockroach under her leg.

But Nancy kept working and saving money. She taught herself English by listening to and talking with customers.

“I learned something new everywhere,” said Nancy, a petite and energetic woman who had worked as an accountant in China. “I’ve always worked hard. I never give up.”

In 2012, Nancy attended Chinese massage school in Los Angeles and became a reflexologist. She owned a massage shop in Orange County in California for three years, and she worked at reflexology and massage spas in Columbus, Ohio, Alabama and Tennessee before she moved to Southwestern Pennsylvania for a job at a reflexology shop at South Hills Village.

Until she left China, Nancy spent her entire life in Tianjin. The fourth of five children, Nancy’s father died when she was 7, leaving her mother to raise a family on $6 a month.

Her three older sisters went to work, and only Nancy and her younger brother graduated from high school.

But Nancy yearned for different opportunities, and knew she wouldn’t get them in China.

“I wanted to come to the United States for a long time. In China, I felt like my life would never change,” said Nancy. “The Chinese government always tells you how bad it is everywhere except China, so we never get a chance to know the world outside of China. And if my daughter stayed there, it would be almost the same for her.”

One of Nancy’s happiest days was Jan. 27, 2017, when she became a U.S. citizen at a naturalization ceremony in Pittsburgh.

She spent a year studying for her citizenship test and enlisted her clients to help her prepare. While Nancy was massaging their feet, her clients would quiz her on the test questions.

“I never knew I could be really, really happy like this,” said Nancy. “It is a very good memory.”

She also attended classes at the Literacy Council of Southwestern Pennsylvania to improve her English.

There, Nancy met Kris Drach, board director and volunteer tutor for the literacy council, with whom she struck up a friendship.

“When she came to the literacy council, her English was full of mistakes, but I’ve never seen anyone work so hard to fix it. She’s inquisitive, and she threw herself into English lessons,” said Drach. “She’s one of the most wonderful people I’ve met in my life. I don’t know anyone with that level of kindness and generosity. She has no fear. She knew what a better life looked like and she wasn’t afraid to go for it. And she is the hardest-working human being I have ever met.”

Nancy (who chose an American name to make it easier for clients) is grateful to the tutors and staff there.

“They helped me a lot and my English has gotten better. I love to learn and I always worked on my English on my own. I need language to talk to my clients. If I can’t speak with them, I cannot make my clients feel comfortable,” said Nancy.

Danielle Kowcheck has been visiting Nancy’s shop weekly for the past year for treatment for a lower back problem. Kowcheck, a hairdresser, owns South Main Style, so she knows the challenges of being a female business owner.

“I give her a ton of credit. She’s built a wonderful business,” said Kowcheck. “Besides giving awesome massages, she’s a really great person. She’s a very giving person, very thoughtful. She makes a connection with customers.”

Nancy wanted to come to America sooner, but she worried that if she left, it might be the last time she would ever see her mother, who was old and in poor health.

The year after her mother died, Nancy came to the United States on a student visa, and then received a work visa. She got her green card and applied for green cards for her husband (from whom she is now divorced) and daughter.

She said she has accomplished many of her goals, but one dream remains: owning a house.

She credits her success to tenacity and the helping hand she received from people, including a benefactor, a female business owner who was a client at the South Hills Village shop.

The woman helped Nancy remodel the space she currently occupies, which is nicely appointed with Chinese decor and plants that have thrived, thanks to Nancy’s green thumb.

A local chiropractor also began directing his clients to Nancy’s shop, which helped grow her business.

“I don’t have a lot of money, but I feel I am rich. Why?” asked Nancy. “Because I’ve learned a lot from my friends, but the most important thing is I’ve learned how to give. People have helped me and been good to me. I try to give something back every day. Even if people are sad and you give them a smile, it is a gift. I want to be a better person.”