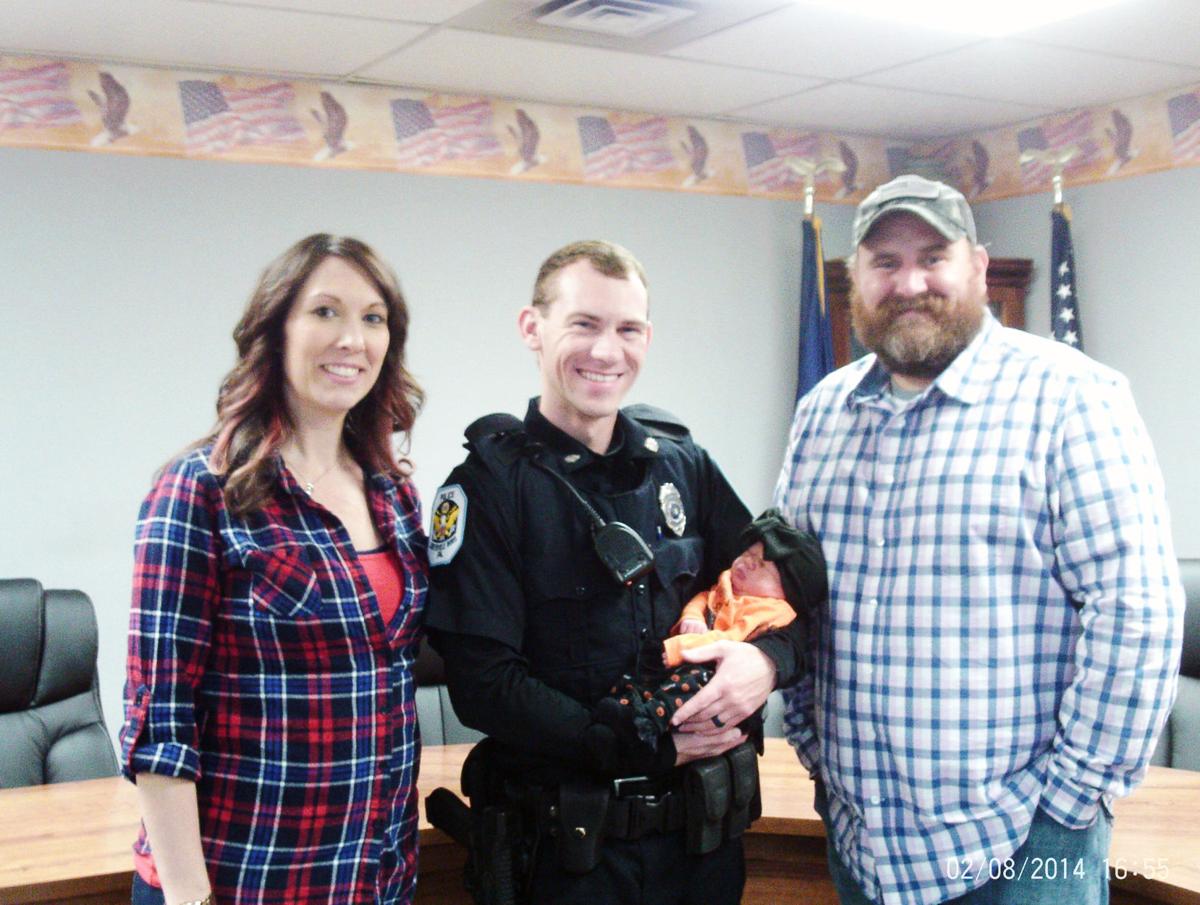 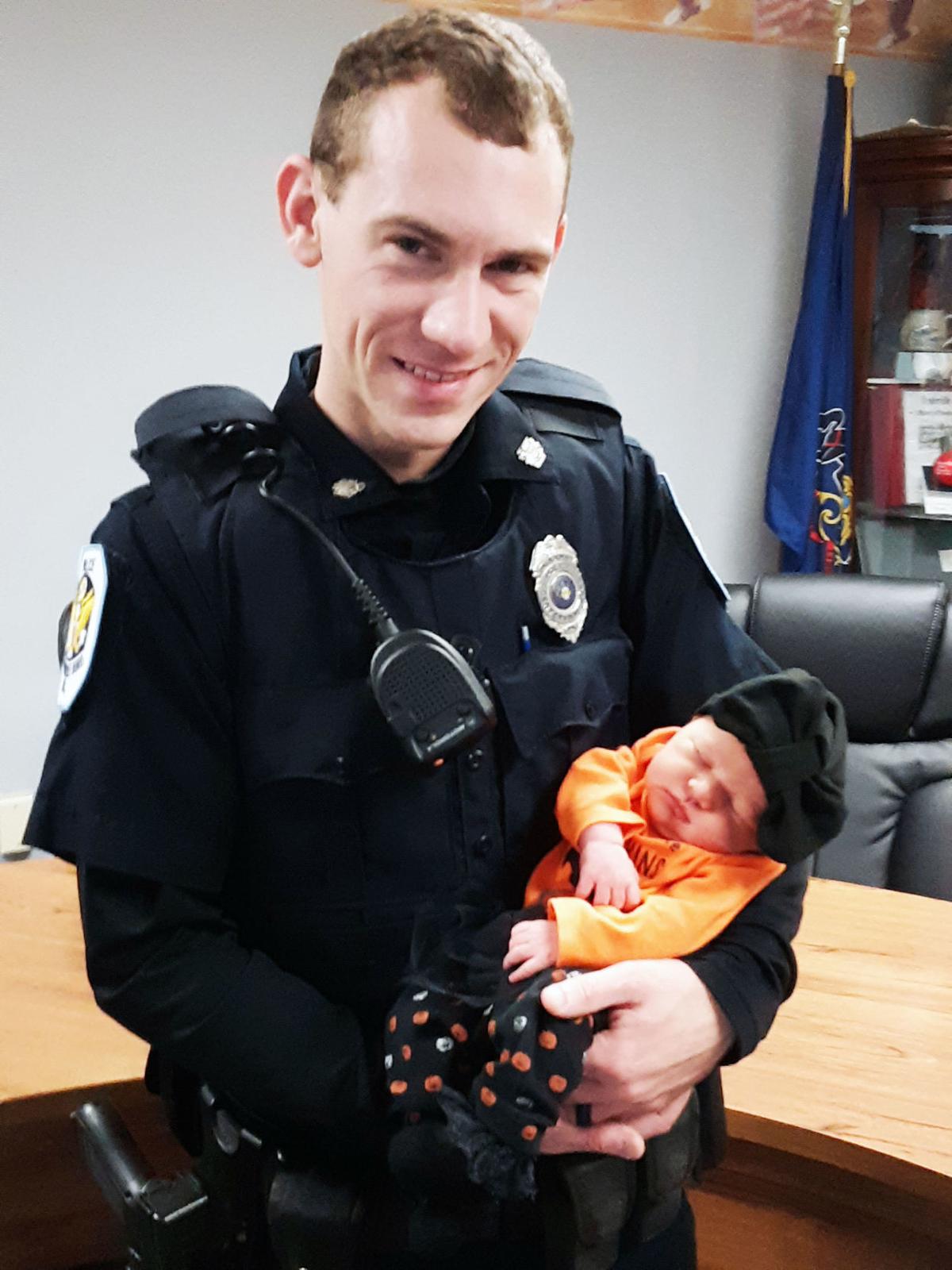 Jessica and Matthew Vojacek thought they knew what to expect with the birth of their third child.

But Poppy couldn’t wait for the hospital.

While driving on Route 40 through Centerville Oct. 29, Jessica knew they weren’t going to make it to Jefferson Hospital. Jessica said she and Matthew noticed a borough police officer was following behind them.

“We pulled over. My husband jumped out of the car and tried to flag him down. I already had my feet above the dash. Her head is coming out,” Jessica said.

Driving the patrol car was Carl Talbert, a 27-year-old officer, who has been with the Centerville Borough Police Department since September.

“I was on my normal patrol for my shift, and I was about to turn onto (Route 40) off of one of the side roads in the borough,” Talbert said. “I observed a vehicle following closely to another vehicle. Just out of curiosity, I turned onto 40 to follow the vehicle. About a half mile up the road, it had pulled off the right-hand side of the road on the shoulder.”

When Matthew told Talbert the situation, he called for an ambulance, grabbed a pair of latex gloves and a clean t-shirt, and delivered the Vojaceks’ newborn daughter.

“You only see that stuff in the movies,” Jessica said. “She was not waiting to come out.”

Jessica and Matthew reside in Deemston Borough, along with Poppy’s two older siblings – Lillian, 11, and Altin, 4.

Jessica, 38, works as a preschool teacher.

“That day I went to work as usual. Nothing was really happening any different,” she said.

Around 3:45 p.m., Jessica said her water broke. The contractions started shortly after and were getting closer together.

“It was maybe 5:30 or so ... I was going to Jefferson. I called them and said my contractions are like three minutes apart now. I think I might have her in the car,” Jessica said.

Matthew, 42, drove his wife to her mother’s house, who lives nearby, to get everything they needed before going to the hospital.

“For a split second, I thought we should stay here and call the ambulance,” Jessica said.

When it was clear they were not going to make it to the hospital, the Vojaceks were grateful for Talbert’s quick action.

“Officer Talbert was phenomenal. He took charge and he knew what to do. We were very thankful he was behind us,” Jessica said.

“He handled the situation with utmost professionalism,” added Matthew.

“You just hope that you’ve been trained appropriately. I luckily have two little kids. I could still remember what happened in the hospital. It gave me a little insight,” Talbert said. “I just went off my life experience to make sure I took care of the situation appropriately.”

After Poppy was born, Jessica and Matthew went the rest of the way to the hospital where their new daughter was kept for two days, a precaution for babies not born in the hospital.

Poppy’s middle name, Catherine, was given to her in honor of both of her grandmothers, Nancy Catherine Zamiska and Virginia Catherine Vojacek.

The first name, Poppy, is in honor of her grandfather, Albert Zamiska, who passed away in June.

“He always got the poppies from the American Legion,” Jessica said. “Growing up, he always had those in the vehicle.”

After they got home from the hospital last Friday, Jessica and Matthew took Poppy to Centerville police station to meet Talbert.

“They wanted to say thank you again for the assistance,” Talbert said.