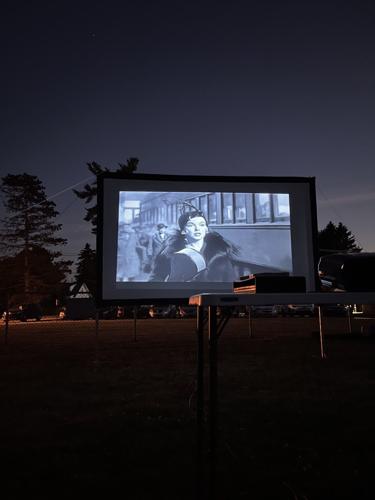 The classic comedy “Some Like It Hot” is shown in Cook School Park in Bridgeville. It was screened there recently by the Pittsburgh Classic Movie Club. 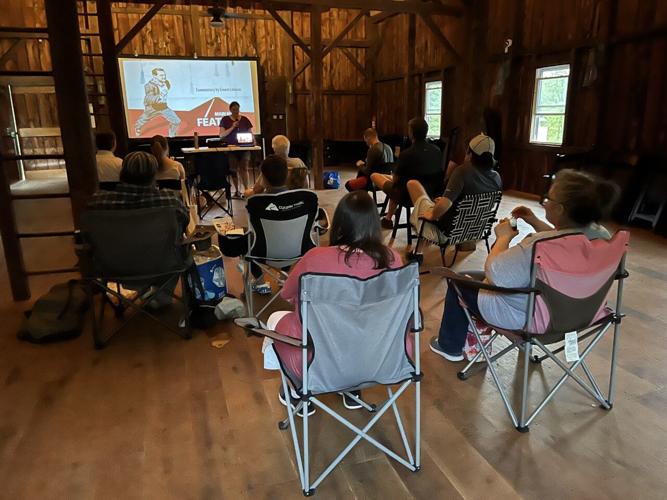 Moviegoers watch a film at Elias Fry Barn in Knob Hill Community Park in Marshall Township. The Pittsburgh Classic Movie Club has also been showing free movies there this summer. 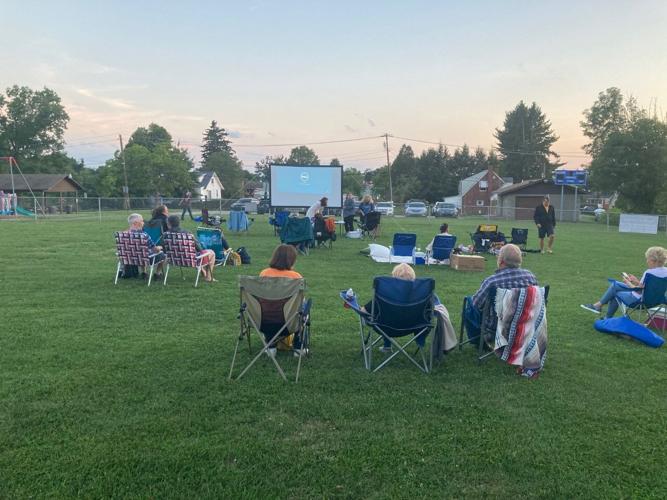 Movie fans get ready to watch “To Catch a Thief” in Bridgeville’s Cook School Park.

The classic comedy “Some Like It Hot” is shown in Cook School Park in Bridgeville. It was screened there recently by the Pittsburgh Classic Movie Club.

Moviegoers watch a film at Elias Fry Barn in Knob Hill Community Park in Marshall Township. The Pittsburgh Classic Movie Club has also been showing free movies there this summer.

Movie fans get ready to watch “To Catch a Thief” in Bridgeville’s Cook School Park.

The sun was just about gone and the moon was just starting to glow as Bridgeville resident Hannah Duttenhoeffer sat in Cook School Park munching popcorn she had brought with her.

Popcorn is a movie-watching must for a lot of people, and Duttenhoeffer was one of about 30 people who had assembled in the park at dusk on a recent Friday night to watch “To Catch a Thief.” The 1955 romantic thriller directed by Alfred Hitchcock and starring an impossibly debonair Cary Grant and impeccably beautiful Grace Kelly was going to be shown on a screen set up by a fence at the end of a grassy field, a Blu-ray projector placed before it.

“To Catch a Thief” is one of those movies that turns up on Turner Classic Movies (TCM) periodically, is available on multiple streaming services and can readily be found on DVD or Blu-ray on Amazon or even at many public libraries. Nevertheless, members of the Pittsburgh Classic Movie Club, which was putting on the screening, are betting that moviegoers will want to see enduring favorites of yesteryear in the great outdoors and away from the isolation of their living rooms or dens.

Even if bug spray is a necessity.

“It’s sort of like a drive-in without your car,” said Wendy Whittick, the organization’s president. “It’s the idea of being outside and being freed up.”

The Pittsburgh Classic Movie Club came into being after some of its early members met up at TCM Big Screen Classics showings around the region. Soon enough, the organization was having monthly meetings and launched a Facebook group. Its goal, according to its website, is to “bring back awareness of the great classic movies – the silent era movies, the screwball comedies, the unforgettable musicals, the brilliant dramas, epics and Westerns that make up the genre.”

Last summer, the group first showed movies in a Pittsburgh-area park, settling into Weisenhaus Park in Spring Hill. This summer, they opted to show movies at both the Elias Fry Barn in Marshall Township’s Knob Hill Community Park, located outside Wexford, and at Cook School Park. They settled on Bridgeville because, according to Whittick, they thought there would be “great interest.”

“They have a lot of community spirit there,” she said.

Cook School Park also has an advantage of having an abundance of space so the screen and audience can be situated far enough from nearby homes. Because licensing fees are attached to public screenings of many movies, the club sought sponsorships from several Bridgeville businesses. Those attending have to bring their own blankets, lawn chairs, food or beverages. No smoking is allowed and neither are big dogs.

There’s a broad range of movies the Pittsburgh Classic Movie Club can choose from, but they do stick to some basic criteria: go with popular, beloved favorites; avoid epics that are long, such as “Lawrence of Arabia” or “Gone With the Wind”; sidestep explicit sex and gore; and avoid anything that would rankle current sensibilities – Whittick cited the 1942 musical “Yankee Doodle Dandy,” as an example, since it has performers in it who wear blackface makeup.

The club also places an emphasis on beloved stars like Grant, John Wayne or Marilyn Monroe, or recognizable auteurs like Hitchcock – they don’t stray “off the beaten path,” in Whittick’s words. So far this summer, “Casablanca,” “Some Like It Hot” and “McLintock!” have been shown in Bridgeville along with “To Catch a Thief.” On Friday, Aug. 12, “The Wizard of Oz” will be shown, followed by “On the Waterfront” on Friday, Aug. 26. Next month, “The Philadelphia Story” is scheduled for Friday, Sept. 9, and the season will close out with “It Happened One Night” on Friday, Sept. 23.

“We put a lot of thought into it,” Whittick said.

Meanwhile, in Marshall Township, “North by Northwest” and “The Third Man” have been shown so far this summer, and “The Man Who Shot Liberty Valance” is scheduled for Friday, Aug. 19, and “The VIPs” for Friday, Sept. 16.

Will the Pittsburgh Classic Movie Club be back in Bridgeville next year?

“I’m hopeful,” Whittick said. “I feel like we’re having a good experience in the Bridgeville community.”

All screenings are free. For additional information go online to pghclassicmoviegrp.wixsite.com.

A note on comments

Our current commenting system, The World Table, is shutting down effective July 31. Ahead of then, we'll be transitioning to a new commenting system that will only require your subscriber credentials to log in. We'll be testing and deploying this new system in the coming days. Please email webmaster@observer-reporter.com or call 724-222-2200 ext. 2421 with any questions or concerns. Thanks for reading and commenting!