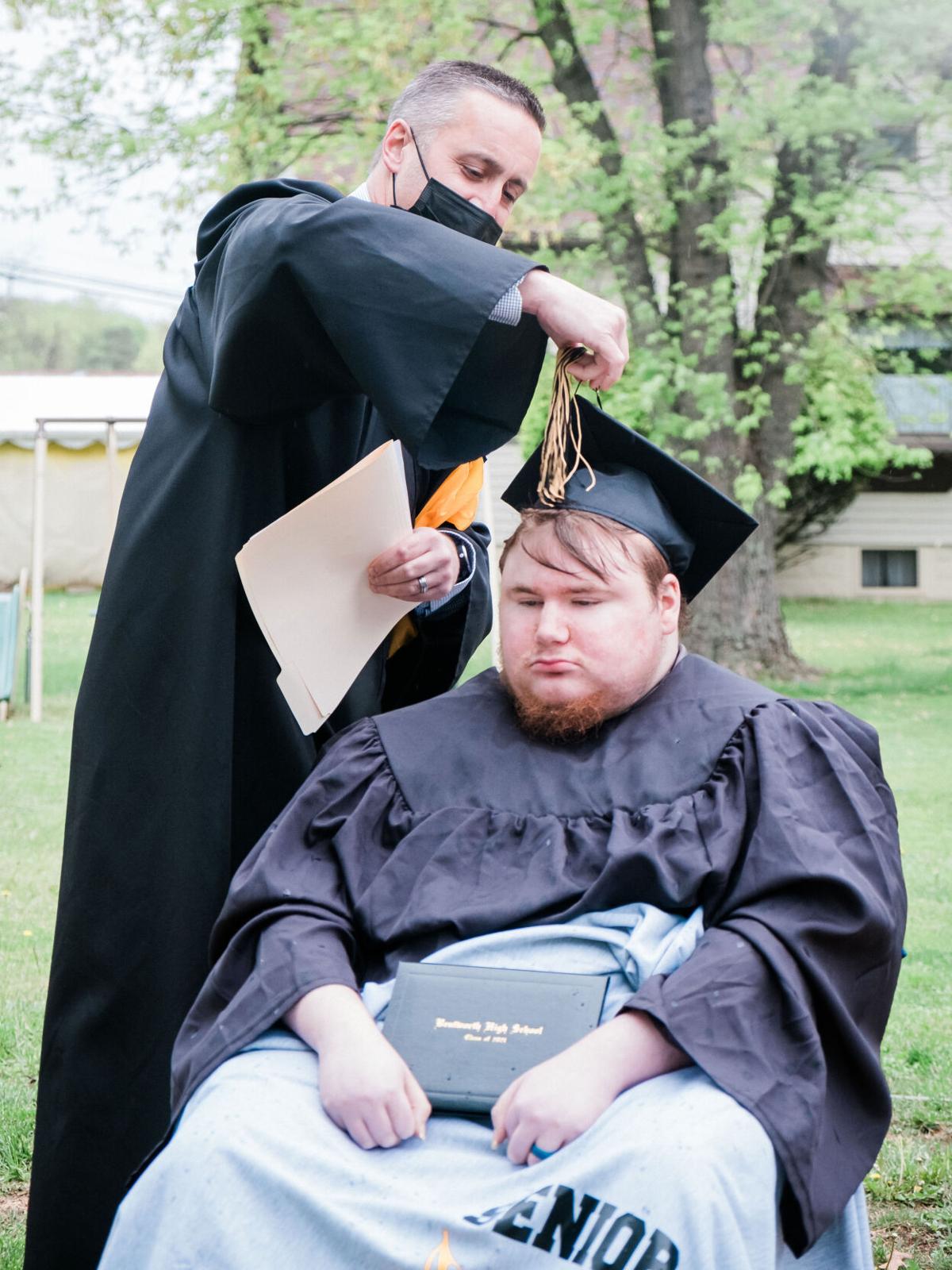 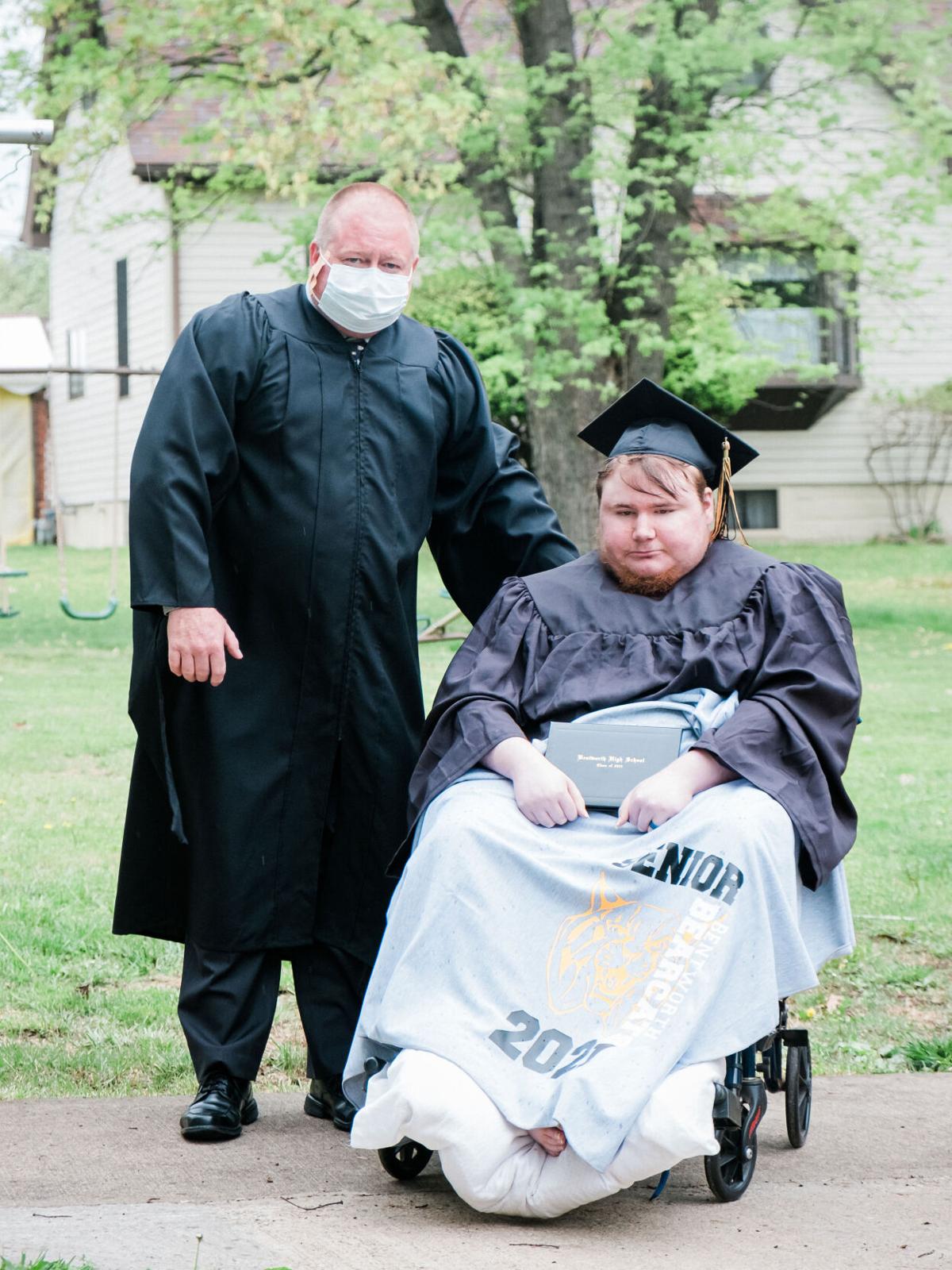 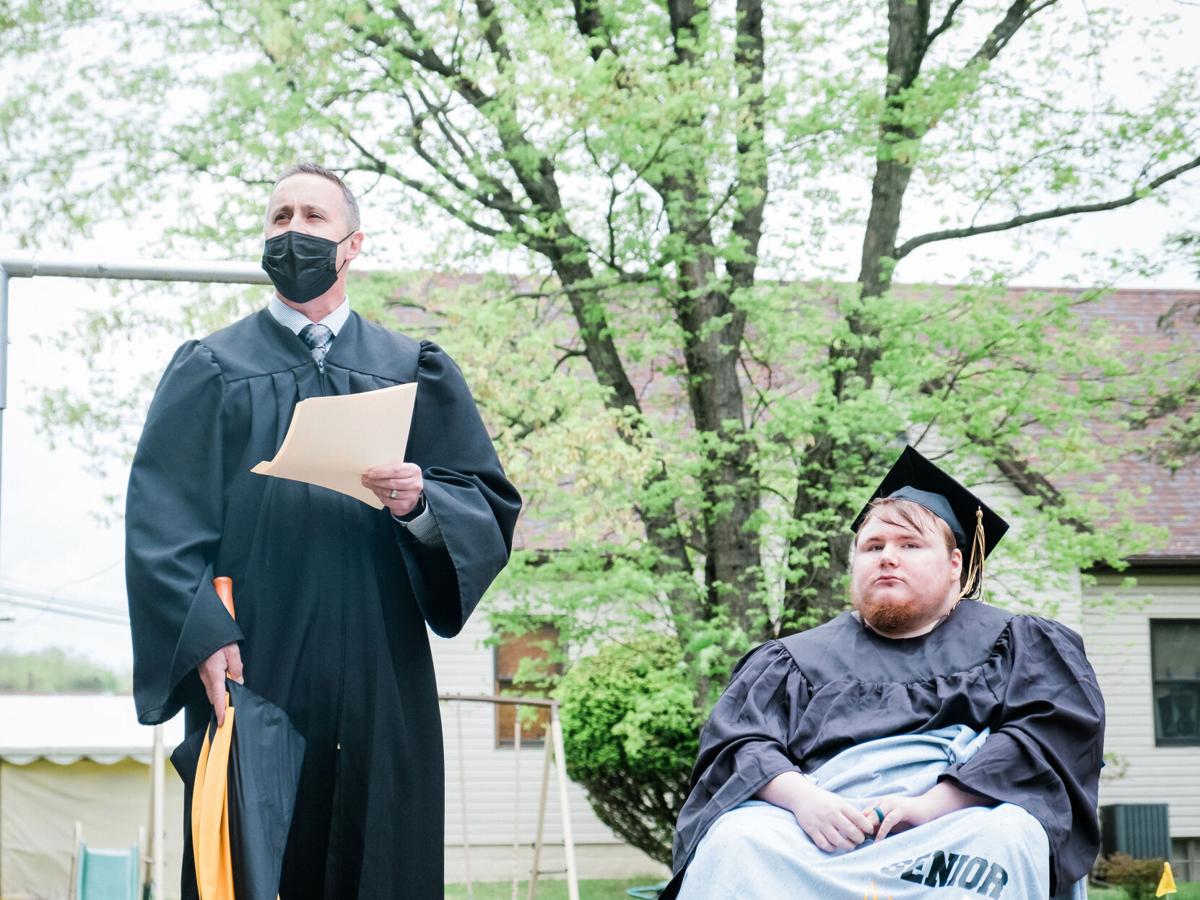 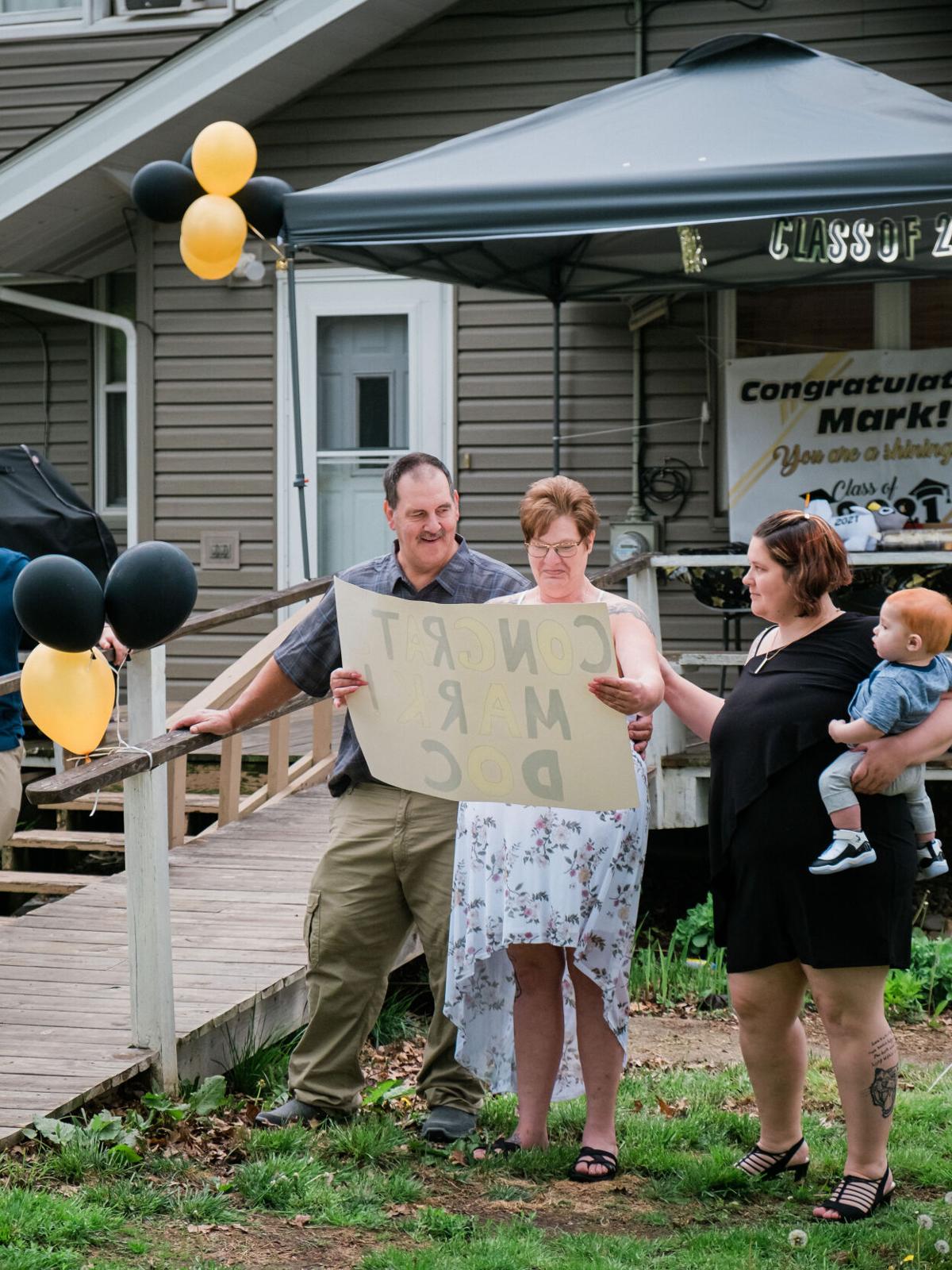 Mark Shrader’s mother, Deana, surrounded by Mark’s family members, look at a sign a student made for Mark’s high school graduation, which took place at their home in the Bentworth School District. 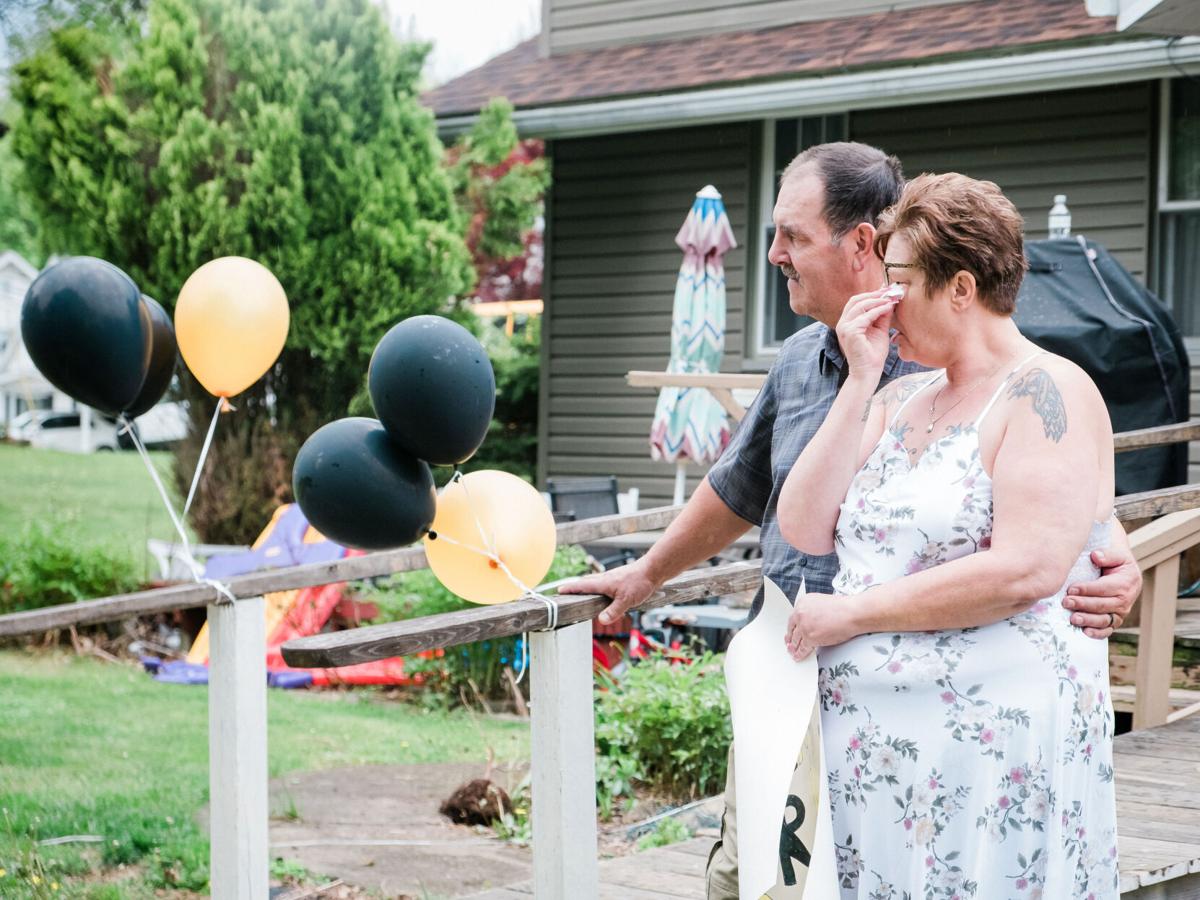 Deana Shrader, Mark Shrader’s mother, wipes away a tear as her fiance, Steven Steele, comforts her during the special graduation ceremony held at their home on Tuesday, where Mark received his high school diploma. 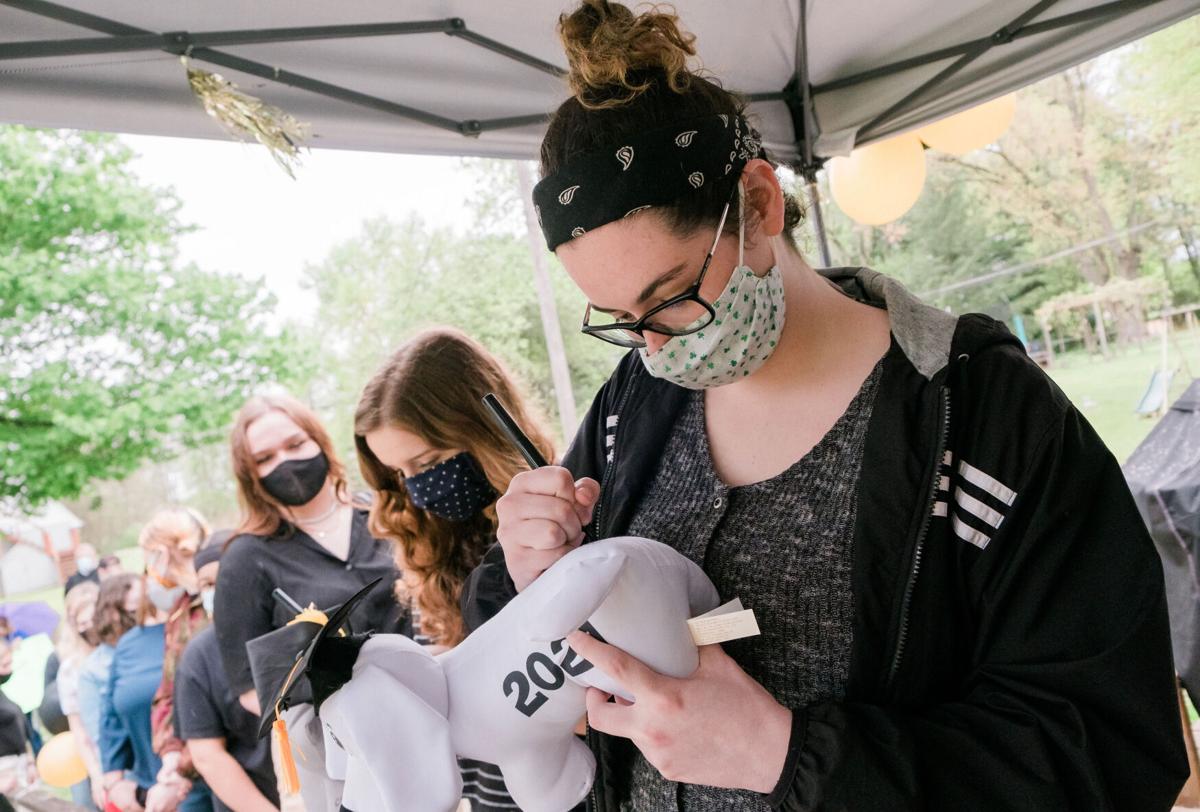 Mark Shrader’s mother, Deana, surrounded by Mark’s family members, look at a sign a student made for Mark’s high school graduation, which took place at their home in the Bentworth School District.

Deana Shrader, Mark Shrader’s mother, wipes away a tear as her fiance, Steven Steele, comforts her during the special graduation ceremony held at their home on Tuesday, where Mark received his high school diploma.

Bentworth High School’s commencement is slated to take place on June 10 in the high school gymnasium.

But on Tuesday, the high school brought the graduation ceremony to the home of senior Mark Shrader, who is battling the most severe form of muscular dystrophy.

Shrader officially became the first graduate of the Bentworth Class of 2021.

Dressed in a cap and gown, and surrounded by his family, friends, classmates and teachers, Shrader fought back tears as he received his diploma from Assistant Superintendent George Lammay.

“We don’t know if Marky will make it to graduation, so this means a lot to him, and to me and our family,” said Shrader’s mother, Deana, who expressed her appreciation for the school district’s kind gesture. “Marky’s tickled about it. Nobody’s ever done anything like this for him before.”

Dr. William Law, a child psychiatrist with Bentworth’s Partial Hospitalization Program who has been with Shrader for 13 years, said during the ceremony that he wanted those in the graduating class to learn three things from Shrader: his determination, courage and attitude.

“This boy has more courage than any boy I’ve ever met,” said Law, who commended Shrader for facing his medical condition “with more guts than I have.

Law rolled up the sleeve of his dress shirt to show Shrader a tattoo he got in his honor. It reads, “Relentless forward progress” and includes the first letter of Mark’s name.

“That means I felt that strongly about how good of a kid Mark was that I felt that should be on my arm. You deserve every bit of graduation,” Law told Shrader.

Shrader was diagnosed at age 8 with Duchenne muscular dystrophy, a genetic disorder that causes progressive muscle degeneration. Boys with DMD often only live to reach their teens or early 20s.

“We don’t know from day to day what’s going to happen. The last time he was in Children’s (Hospital), they said he possibly had a couple of months,” she said.

Shrader also received a certificate of recognition from the Mon Valley Career and Technology Center for his accomplishments in computer classes at the ceremony.

Shrader has fulfilled every requirement to graduate.

But his health has deteriorated, and Superintendent Scott Martin, realizing the severity of the teen’s medical situation, contacted Deana about holding a commencement ceremony for him.

“Mr. Martin didn’t want Marky to miss out on graduation and he actually approached me about doing this,” said Deana.

Two busloads full of classmates, many carrying homemade signs, along with teachers and administrators, participated in the graduation exercise.

Afterward, classmates, teachers and administrators congratulated Shrader and took pictures with him, ate cupcakes donated by Giant Eagle in Bentleyville, and autographed stuffed animals and a Bentworth banner.

Shrader’s best friends, juniors Shane Troy-Caton and Ayden Bochter, were among the students who made the trek.

“We’re a trio. I met Mark when I was in eighth grade, and he’s been a big part of my life,” said Bochter. “We play Xbox all the time, and we’ve made a lot of memories. Both of us were looking forward to being here for him today.”

For Shrader, the ceremony was a special moment, but he is bed-bound much of the time and grew increasingly uncomfortable during the event. Later, in a brief phone conversation, he thanked everyone for coming.

Deana said she was grateful for the celebration.

She said she, too, admires her son’s courage amid a life filled with challenges.

“He has not given up. He has his times when he says he’s tired, but he’s fighting with all of his willpower,” said Deana, noting that Shrader has talked about becoming a lawyer. “He says, ‘Mom, I’m strong like you and I’m going to fight hard.’”

In addition to playing Xbox with his friends, Shrader enjoys reading, doing crossword puzzles, and spending time with his 6-year-old and 2-week-old nephews.

He also loves his rescue dog, Zima – a pit bull mix who Deana described as “a nanny who checks on him at night and lies beside him whenever nurses are here” – and his bearded dragon and cats.

Until the COVID-19 pandemic struck, Shrader attended school every day unless he was sick. Because of the risks, though, he has attended remotely.

Deana said it has been hard for Shrader to be away from classmates and teachers during his senior year.

She thanked the district for helping Shrader reach his graduation day.

“Bentworth has been marvelous. Since he was diagnosed, they’ve always gone out of their way to help him. Since middle school they’ve seen him go from walking, to using a cane, to a walker, to a manual wheelchair, to an electric wheelchair, and they’ve been proactive every step of the way,” said Deana. “I couldn’t have asked for a better school for my son to go to with his condition. Today was an amazing day.”

Editor’s note: Deana has organized a gofundme page, “Mark’s Dream,” to raise money for a new laptop with a wireless keyboard and mouse so that Mark can play Xbox with his friends, since he is mostly bed-bound. Any donations would be appreciated. Visit https://gofundme/.Of6ac825.