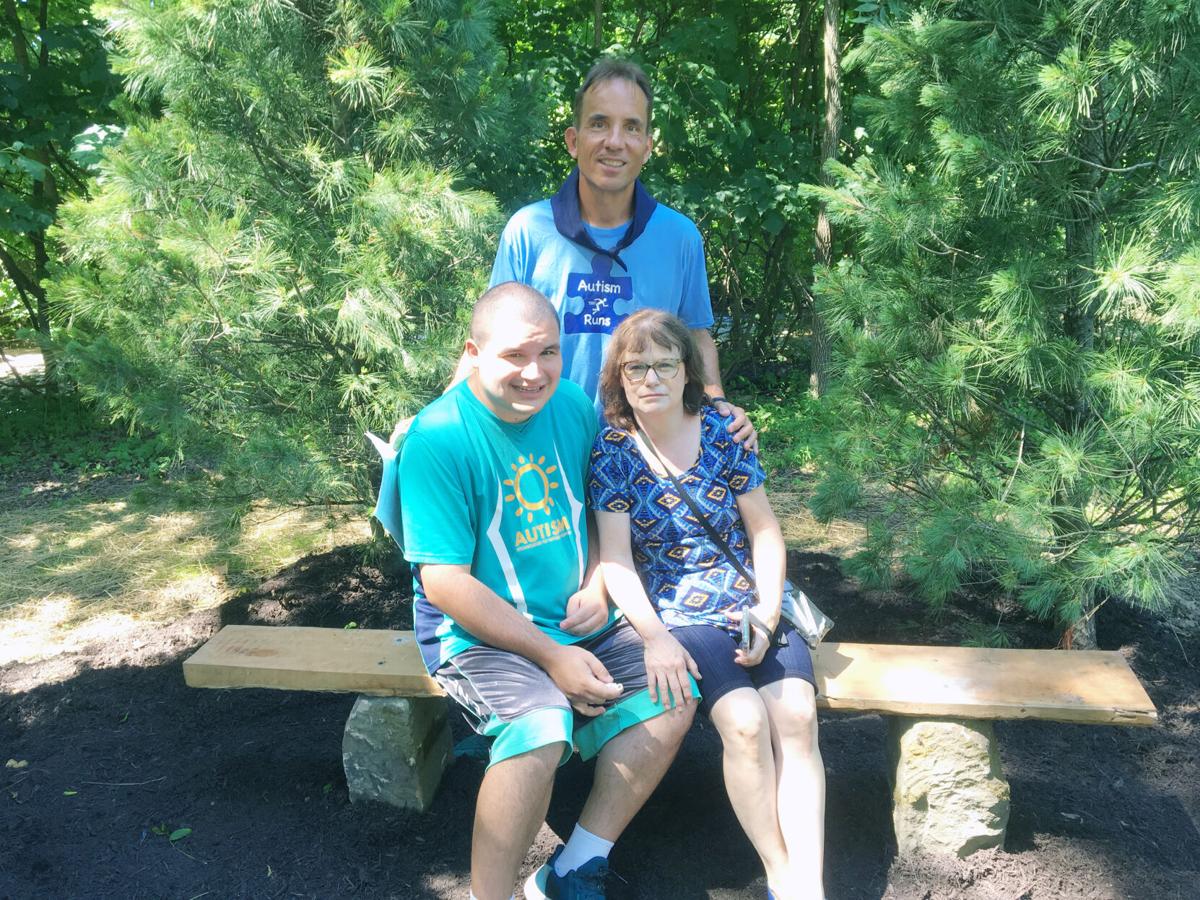 Christopher Buckley stands behind son, Timmy, and wife, Ruth, who are seated in “Timmy’s Grove.” 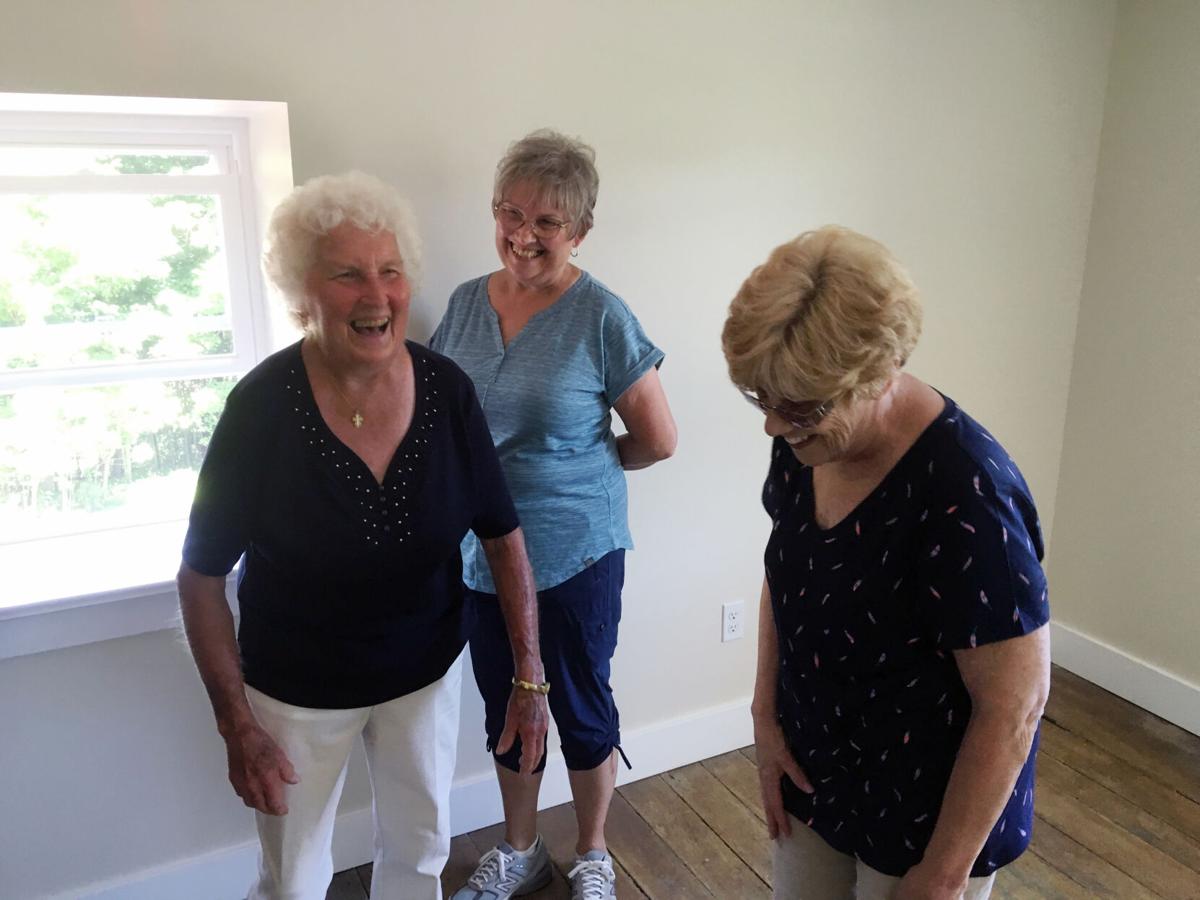 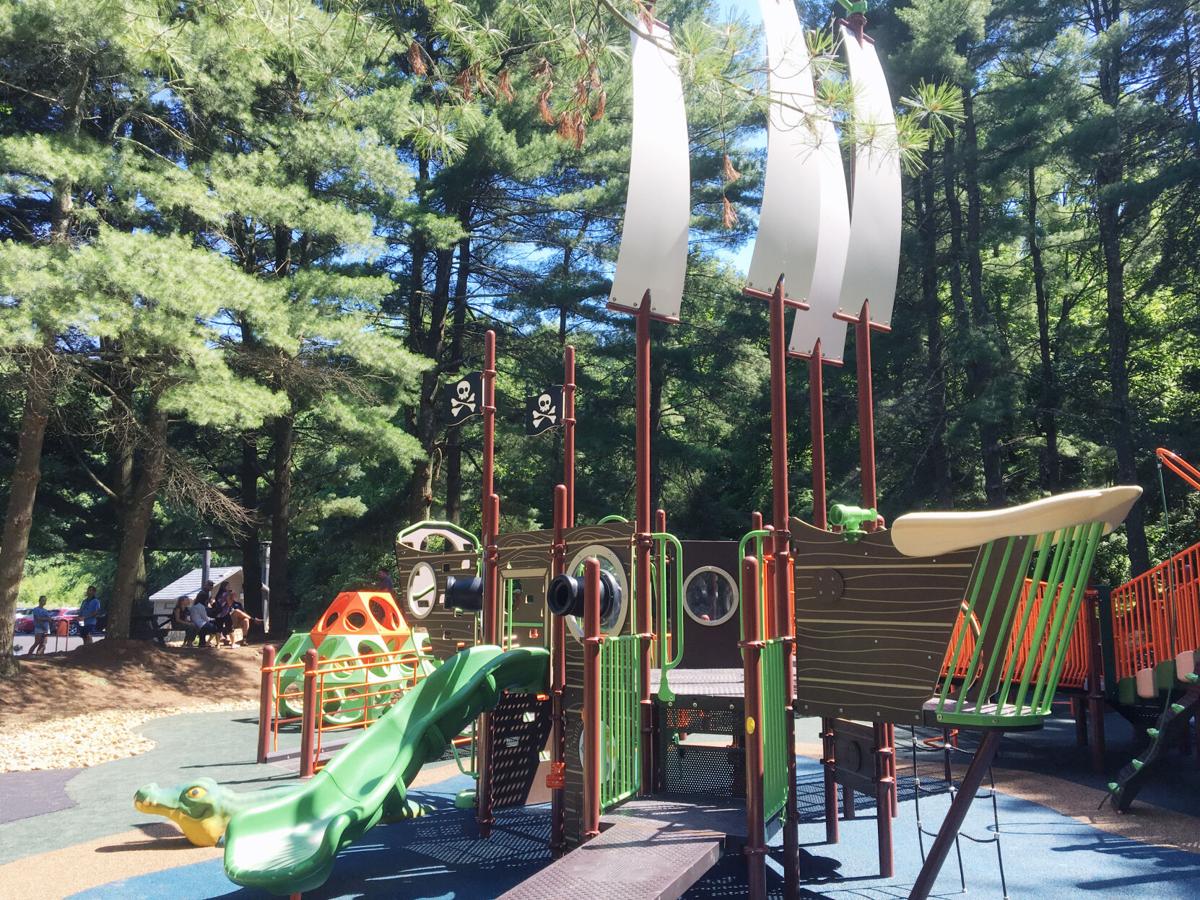 Avast, mateys. A pirate ship has made landfall in a Mingo park playground. 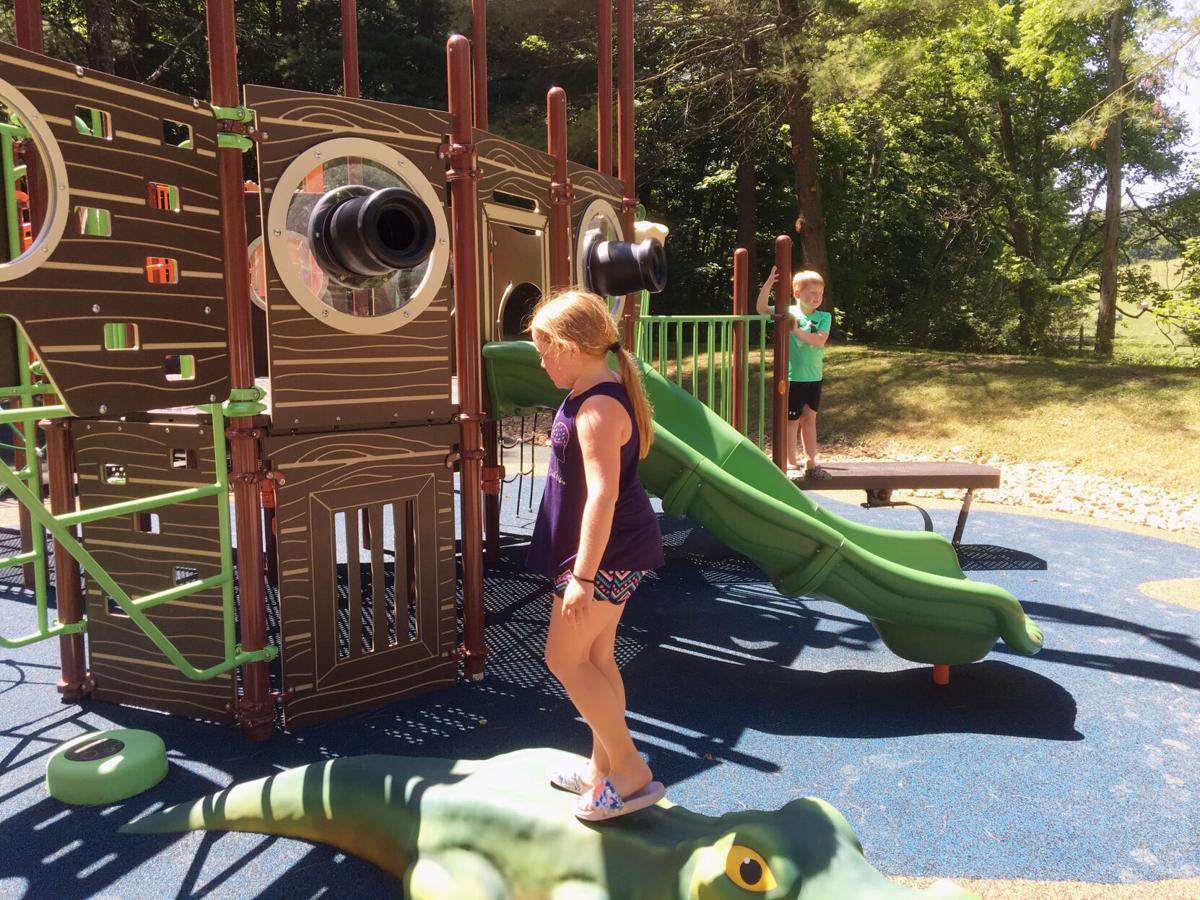 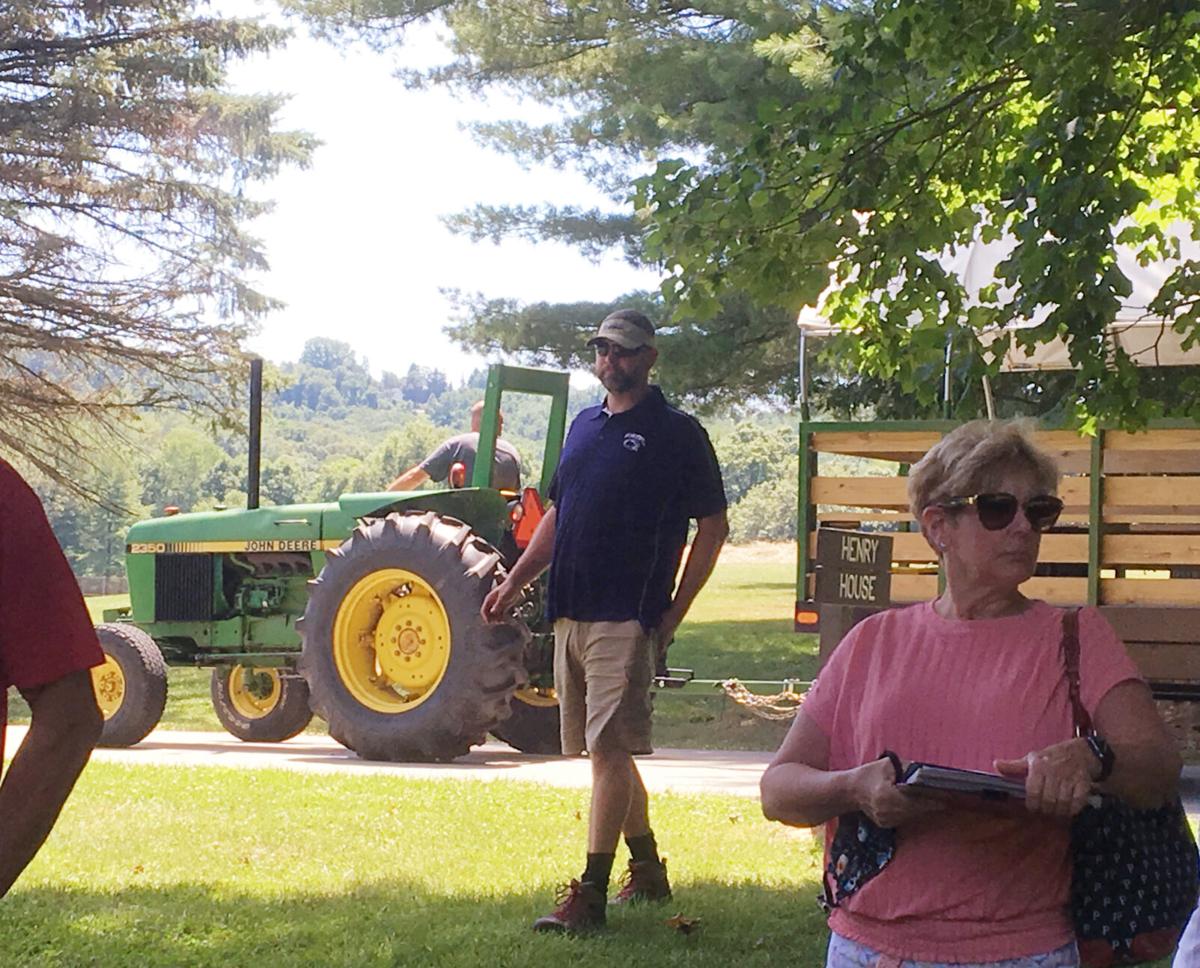 Kim Sumney Saporito, right, was among those who toured new Mingo park features via hay wagon pulled by a farm tractor.

Christopher Buckley stands behind son, Timmy, and wife, Ruth, who are seated in “Timmy’s Grove.”

Avast, mateys. A pirate ship has made landfall in a Mingo park playground.

Kim Sumney Saporito, right, was among those who toured new Mingo park features via hay wagon pulled by a farm tractor.

Many a family reunion has been held at Mingo Creek County Park, but none quite like the ones that took place Wednesday.

Eighty-four-year-old Ann Henry Ballein, like the generations that spanned 150 years, grew up in the stone house that bears her maiden name. The matriarch, nieces, a nephew and a great-niece joined her there to see the Washington County commissioners dedicate the manse for use by the public.

“I came when they were working on it,” she said as those who took part in the tour of new park amenities streamed into the parlor and mounted the narrow, curving staircase.

It was 1960 when the last member of the Henry family lived in the place destined to become part of a county park. William Anderson Henry died that year, and a later owner transacted with the county when it began acquiring land for recreational purposes.

Ballein again visited her former home as part of a dedication of $1.4 million worth of improvements at the park marked this week.

In the general vicinity is another historic home with whom a member of another family became reacquainted.

Kim Sumney Saporito is a transplant to North Strabane Township, having moved from Scott Township in Allegheny County a dozen years ago.

She, too, had a chance Wednesday to reunite with part of her family’s heritage, the century-and-a-half-old landmark Sumney home that was taken apart log by log, transported to Mingo park, and painstakingly rebuilt to benefit park visitors.

“The last time I saw it was on Sugar Run Road,” Saporito said. She described the structure’s condition at that time as “dilapidated” while a hay wagon ride trundled visitors from place to place within the park during the afternoon ceremonies in 90-degree heat and blazing sun.

“It just looks so nice,” she said of the reconstructed dwelling. “It’s brought life into it again.”

And then there was the Buckley family’s contribution to a seating area near what’s being called an “inclusive” playground that features a pirate ship complete with crocodile. An orb known as a cocoon is designed to be a refuge for those with special needs to feel comfortable, and a merry-go-round spinner is flush with ground level to accommodate both wheelchairs and those who are mobile.

In the area that’s known both as Maintenance Hill and Shelter No. 1 is Timmy’s Grove, named in honor of Timmy Buckley, 29, who has autism. The pine glade is identified by a sign that notes, “Bringing love, joy and hope to all.”

Christopher Buckley, father of Timmy, has been pounding pavements as a runner for the past eight years, including an “ultra” relay race along the Great Allegheny Passage, a rail-to-trail conversion, from Cumberland, Md., 150 miles to Pittsburgh as an effort to raise autism awareness.

On his dad’s daily six-mile runs, Timmy accompanies him for three of them.

“A society grows great when old men plant trees whose shade they know they shall never sit in,” Buckley quoted from a Greek proverb, referring to 18 larger pines and saplings donated to the play area.

“It is my hope that Timmy’s Grove will provide comfort and peace for special families and the understanding that they belong right here, right now. Every person has value.”