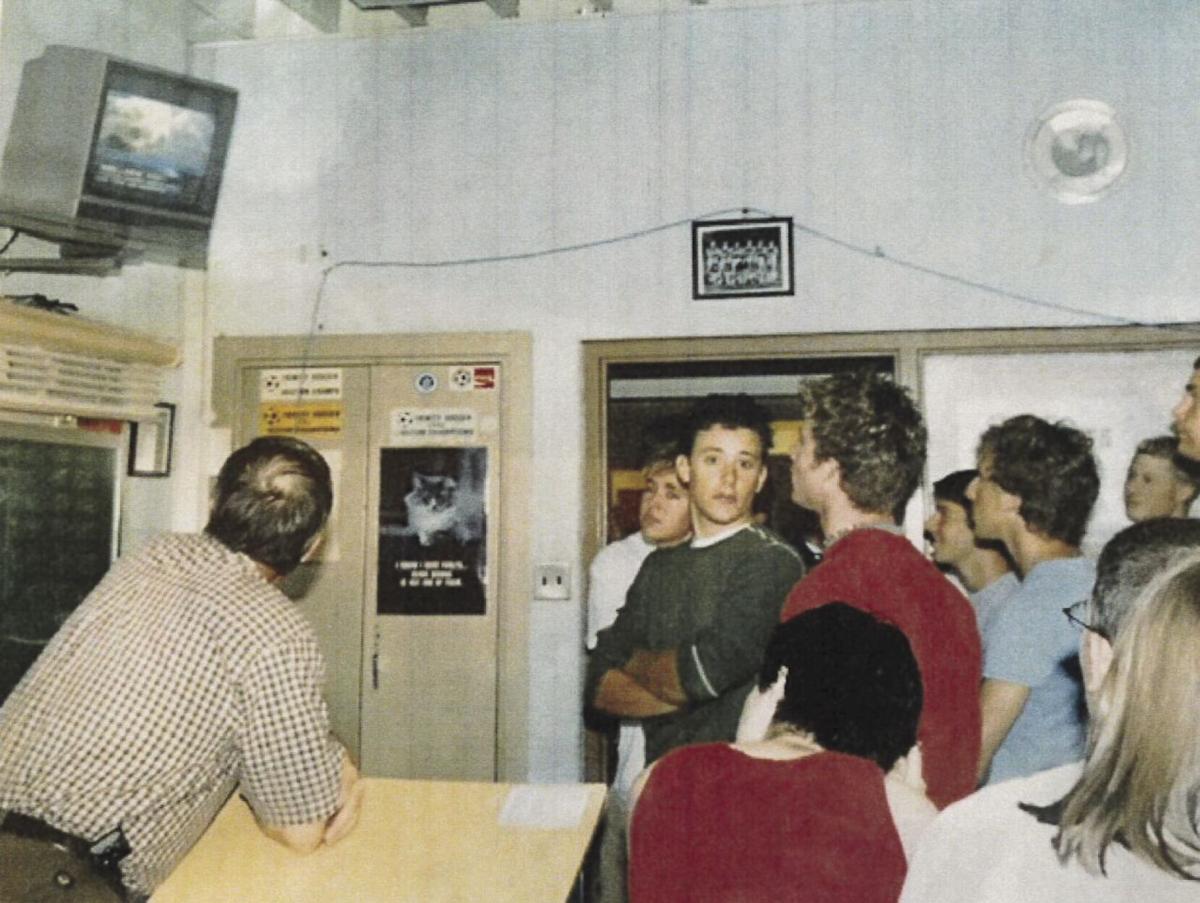 DJ Faldowski, standing in the maroon sweater, watches as the 9/11 terrorist attacks are shown on television on Sept. 11, 2001. Faldowski, along with his Trinity High School class mates and teacher, watched in dismay as the second hijacked aircraft crashed into the South Tower of the World Trade Center. Faldowksi enlisted in the military following the attacks. 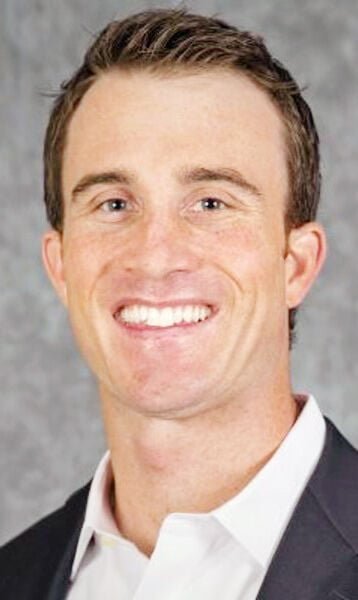 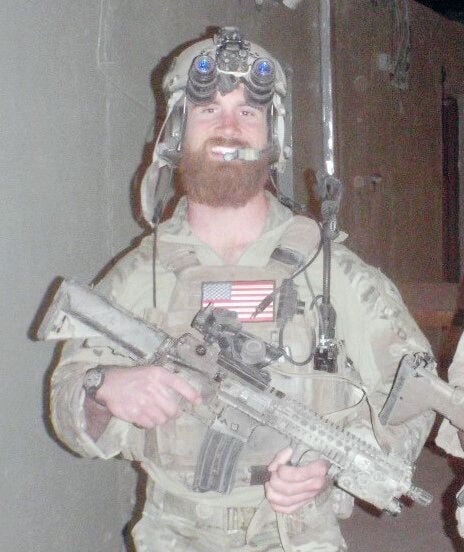 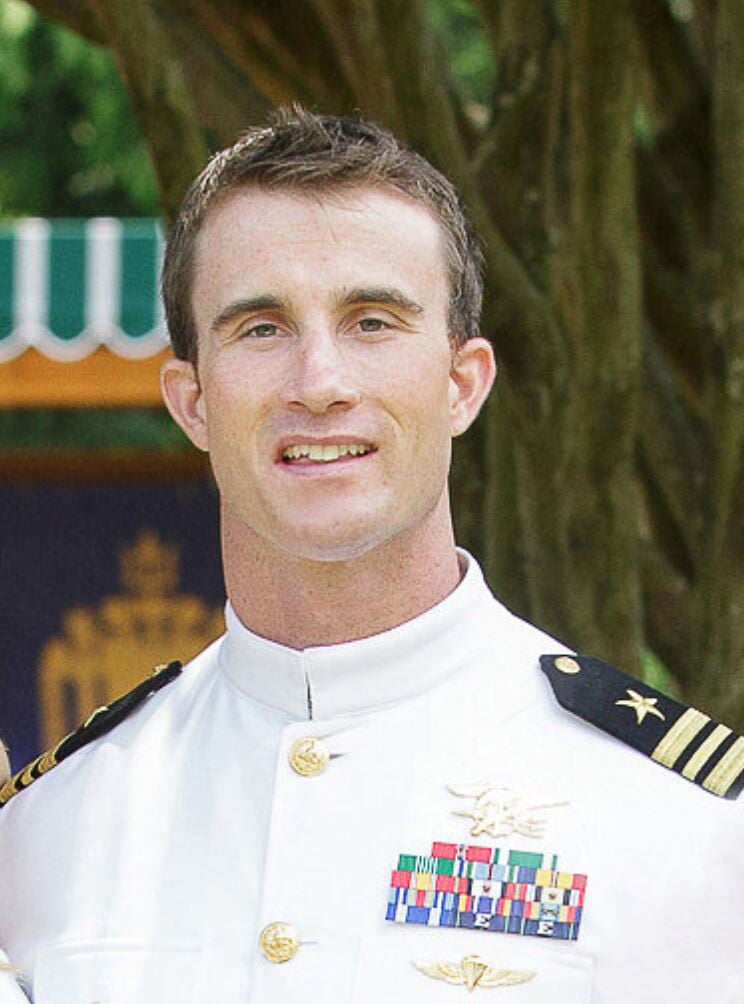 DJ Faldowski, standing in the maroon sweater, watches as the 9/11 terrorist attacks are shown on television on Sept. 11, 2001. Faldowski, along with his Trinity High School class mates and teacher, watched in dismay as the second hijacked aircraft crashed into the South Tower of the World Trade Center. Faldowksi enlisted in the military following the attacks.

On Sept. 11, 2001, D.J. Faldowski stood in front of a television in his second-period history class at Trinity High School and watched in horror as terrorists crashed planes into the World Trade Center and the Pentagon and another plane crashed into a field in Shanksville, killing more than 3,000 people.

For Faldowski, then a 17-year-old senior standout scholar and athlete, the events of 9/11 shaped the course of his life.

Faldowski, who played a pivotal role in the Washington County PONY League baseball team’s 1998 run to the championship game in the PONY League World Series, had been courting baseball scholarship offers from colleges and universities.

“That day was a very profound day in my life,” said Faldowski. “Prior to 9/11 I really was not considering the military. 9/11 was my call to serve.”

Faldowski was among the 181,510 Americans who enlisted in the ranks of active duty service, and the 72,908 who joined the enlisted reserves in the year following the attacks.

At Annapolis, Faldowski was a four-year varsity baseball player (he collected two hits in three at-bats off Cy Young winner and Houston Astros ace Justin Verlander) and earned a bachelor of science in economics.

He became a U.S. Navy Seal and went on to complete four tours in Iraq and Afghanistan and carried out other missions in southeast Asia.

For Faldowski, 9/11 remains – like Pearl Harbor, or the explosion of the space shuttle Challenger – a moment seared in his memory. He can’t erase the images of first responders rushing toward the burning towers, people covered with ash and debris, victims jumping from windows, families grieving.

“We thought that someone flew a private plane into the first tower. All at once I saw the second plane fly into the other tower, and I was in shock. I didn’t know what the world was going to be like after that; I just knew it was going to be different,” said Faldowski. “(Joining the military) became one of the things I was considering to the only thing I considered.”

Faldowski’s reaction to the terrorist attacks that day was captured in a photograph that Jefferson-Morgan School District Superintendent Joseph Orr, then a principal at Trinity High School, still has framed in his office.

Orr said that, even in high school, Faldowski was a leader who had a positive influence on students, adults and teachers.

“He had great influence and took it to an ultimate level when witnessing the events of 9/11,” said Orr. “He wanted to be involved, take action and contribute to something that he felt extremely committed to. D.J.’s commitment and call to action saved lives and continues to influence others in a positive fashion.”

The 20th anniversary of 9/11 will be a day of reflection for Faldowski, much like the previous 19 years have been.

“What goes through my mind is kind of the same thing you saw in that picture: What happened that day, and the purpose behind this global war on terrorism. And I think a lot about my friends who paid the ultimate price for that purpose,” said Faldowski.

Over the course of his nearly decade-long combat duty, Faldowski lost close friends in battle, and he grieves their deaths deeply.

In the same way that 9/11 spurred him to enlist in the military, the deaths of those soldiers led Faldowski to become a key part of Legacies Alive, a nonprofit organization co-founded by his brother, Mark Faldowski, a former Army ranger, to ensure that the sacrifices of fallen heroes and their Gold Star families will not be forgotten.

Faldowski serves as Director of Operations and is a board member for Legacies Alive.

“We noticed a pattern that after someone is killed, there’s abundant support. And time goes on and life moves on, but families still have that loss. So we make sure their loved ones’ legacy is still alive,” said Faldowski. “We want to be that support network, from now until the end.”

Legacies Alive gained recognition in April 2015, when Mark Faldowski and the nonprofit’s co-founder, Mike Viti, embarked on a six-month, 4,400-mile walk from DuPont, Wash., to the Army-Navy game in Baltimore, Md., to honor Chase Prasnicki, their former Army football teammate who was killed in Afghanistan, and the service members who also had been killed in the war on terrorism.

When Ring completed the challenge in late November 2015, he became the first American and only the second person to ever swim the entire length of the Mississippi River.

To date, Legacies Alive has reached 725 Gold Star families and has completed several “legacy projects” to celebrate the lives of the fallen soldiers.

Faldowski also has a passion for mentoring youth, fostered by his close relationships with his family, teachers and coaches.

He believes mentorship is a powerful and important tool for helping teens and young adults to discover their potential, and he shares his message – the importance of a life of service – at schools and events whenever he can.

Among the schools he visited recently was Jefferson-Morgan High School, after Orr invited him.

“I talk about a theme of service-driven life. I’m very proud of my roots and where I came from, and my Western Pennsylvania values. It’s not me, it’s we, it’s all of us,” said Faldowski. “When I was in high school, I didn’t know what I wanted to do. My teachers, my high school coaches, they all played a huge role in where I ended up. I’m grateful to and appreciative of those around me – my family, the people who supported me and gave me permission to go down the path I chose. I chose to live a service-driven life. If you dedicate your life to service, everything will be OK. Don’t sweat the small stuff. Commit to service and watch how things play out. You don’t have to have the world figured out.”

Faldowski, who now works in the private sector, lives in Nashville, Tenn., with his wife and three small children.

Faldowski thinks about the events of Sept. 11 often.

He and his comrades saw the best and worst of humanity while on tours of duty – from remarkable selflessness and significant accomplishments to overwhelming hate.

But, he said, “Through it all, especially when I needed to steady my resolve, the memories of that September day served as my guiding light.”